Outrage is growing among human rights advocates at the use of commercial ferries by Italian authorities to quarantine asylum seekers and migrants due to COVID-19 – not just new arrivals, but also people from reception centres inland who have been in Italy for years.

The initial policy began in April, but civil society organisations and lawyers argue that legitimate public health concerns are now being used as an excuse to detain people in poor conditions on the ferries and to restrict access to asylum, setting a dangerous precedent.

A slew of troubling incidents, including several recent deaths and reports of attempted self-harm, have added to the sense of alarm.

“The use of quarantine ships for those migrants who arrived by sea raises a number of human rights concerns,” Dunja Mijatović, human rights commissioner at the Council of Europe, told The New Humanitarian. “Vulnerable people, including children and those with underlying medical conditions, must be promptly identified and evacuated on land; everyone must have prompt access to adequate healthcare and to information on their rights and be able to apply for asylum.”

The movement of people across the sea is also under fresh scrutiny after it emerged that the attacker who killed three people outside a church in Nice on 29 October arrived in Italy by boat in September and was quarantined on board a ferry before making his way to France.

Nearly 28,000 asylum seekers and migrants have arrived in Italy so far this year, led by a sharp uptick in the number of Tunisians leaving their country by boat. In comparison, around 11,500 people arrived all of last year, and more than 181,000 arrived in 2016 – the height of the so-called migration crisis in the central Mediterranean.

Since declaring the country’s ports unsafe for asylum seekers and migrants arriving by sea during its first coronavirus lockdown in April, the Italian government has chartered eight ferries at different times to act as floating quarantine centres, each one costing more than one million euros ($1.16 million) per month, according to a tender seen by TNH. Four of the ferries are currently in use.

The Italian Red Cross is overseeing the quarantining of asylum seekers and migrants onboard the ferries. The quarantine period is supposed to last for 14 days, with coronavirus tests administered when people board and before they disembark. 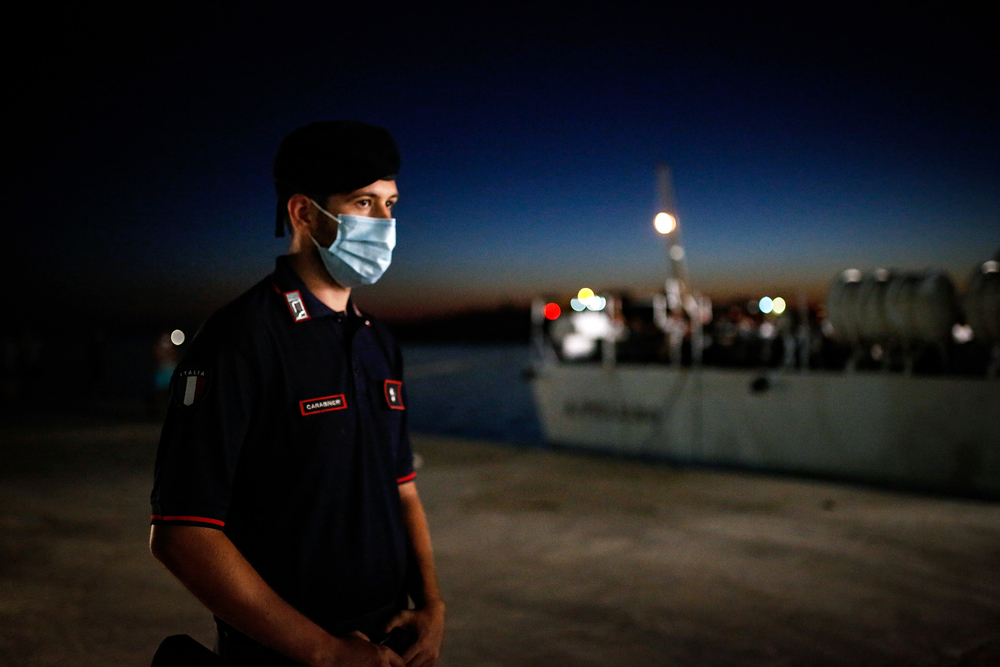 So far, around 10,000 people have gone through quarantine on the boats, according to the Italian Red Cross in Sicily.

Reports began emerging in October of authorities transferring asylum seekers who have already been in Italy for months – even years – from migration reception centres to quarantine ferries after they test positive for coronavirus. These people, some of whom have valid residency permits, are still in the midst of the asylum process.

Italy’s reception centres have come under criticism for having inadequate social distancing and health standards, and Italy’s interior minister, Luciana Lamorgese, justified the move by citing the need to protect other asylum seekers and staff at the centres from infection.

But civil society organisations and migration lawyers have expressed concern that the rights of asylum seekers are being violated.

"These transfers are discriminatory and without legal basis,” Salvatore Fachile, a lawyer representing one of the asylum seekers who was transferred, told TNH. “The isolation should be limited to protecting the right to health of the individual and the community, not [to] justify restrictions on personal freedom.” 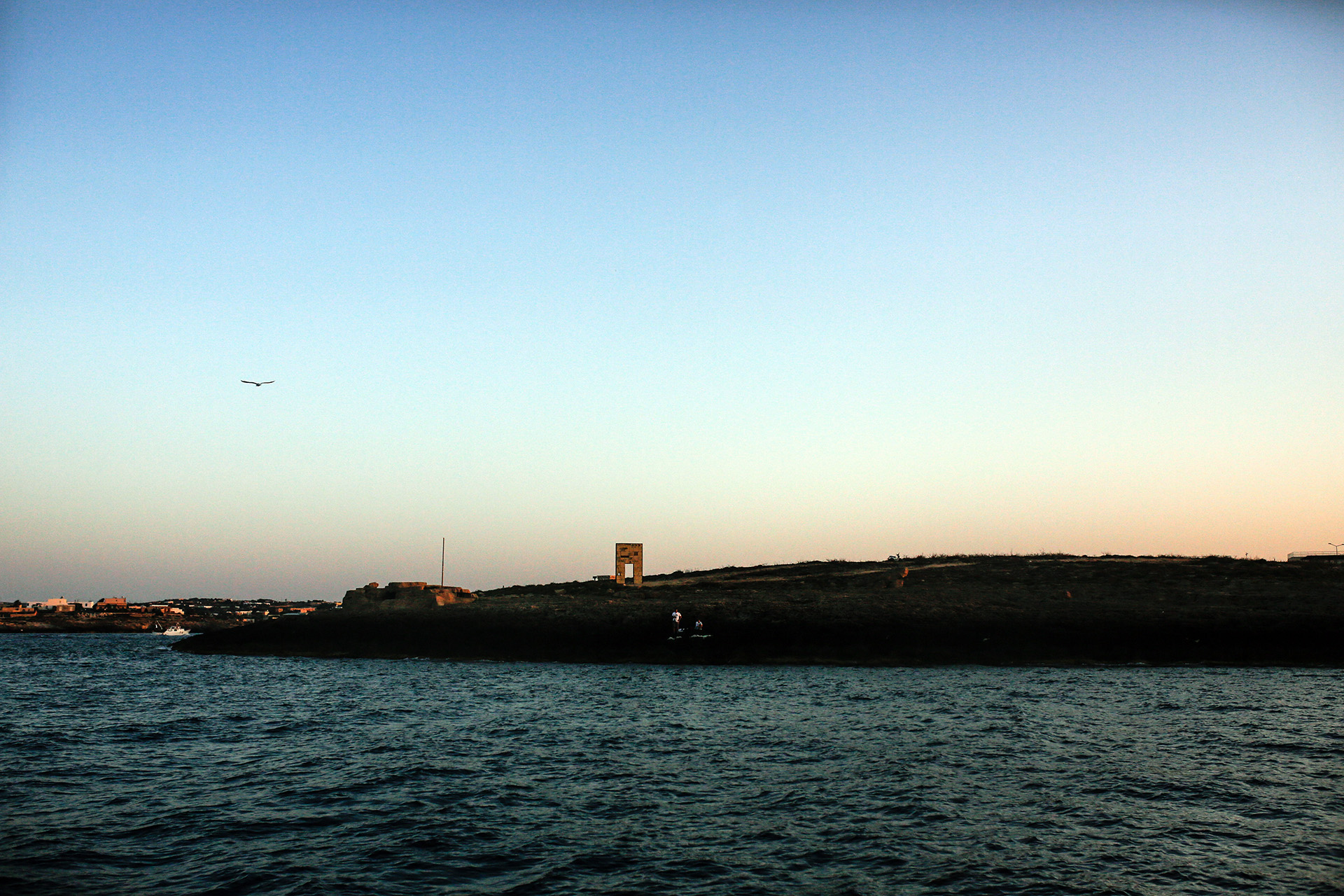 ‘This is totally illegitimate’

Lawyers from the Association for Juridical Studies on Immigration (ASGI), an Italian civil society organisation, allege that since the beginning of October approximately 100 asylum seekers who were in reception centres in different Italian cities have been transferred to quarantine ferries off the coast of Sicily after testing positive for coronavirus.

Several asylum seekers who were removed from centres in Rome described their ordeals to TNH.

A 27-year-old Afghan asylum seeker who arrived in Italy in July 2019 recounted how he was removed from the centre where he was staying at 2:30 in the morning on 8 October after testing positive several days earlier. He said he wasn’t told what was happening or where he was being taken. “We kept asking them where they were bringing us,” said the asylum seeker, who requested to remain anonymous.

It took 14 hours for the group of 17 people he was with to reach Palermo, in Sicily, where the quarantine ferry was anchored offshore. “During the journey, we only received water, but no food,” the asylum seeker added. “We were treated as terrorists or dangerous criminals.”

Four other asylum seekers, who all hold Italian residency permits, told TNH they were also taken from their reception centre in the middle of night, put on a minibus with Italian Red Cross staff, and driven to one of the quarantine ferries anchored close to Palermo. Again, they said they were not informed where they were being taken. “Police took us by force during the night,” an asylum seeker from Liberia who has been living and working in Italy for more than three years, told TNH.

The asylum seekers who spoke to TNH spent 14 days on board quarantine ferries before being released. During that time, they lost their spots at the reception centres where they had previously been staying and were left without accommodation. Some were also issued orders of removal – requiring them to leave Italy within seven days – despite still being in the midst of the asylum process. “This is totally illegitimate,” said Fachile, the lawyer.

‘It was a nightmare’

Civil society organisations have also raised questions about the quality of medical care, psychological support, and legal assistance available to people on board the quarantine ferries, as well as the overall living conditions on the boats.

At the end of May, a 22-year-old Tunisian man named Bilal jumped off of one of the ferries and died while attempting to swim ashore. 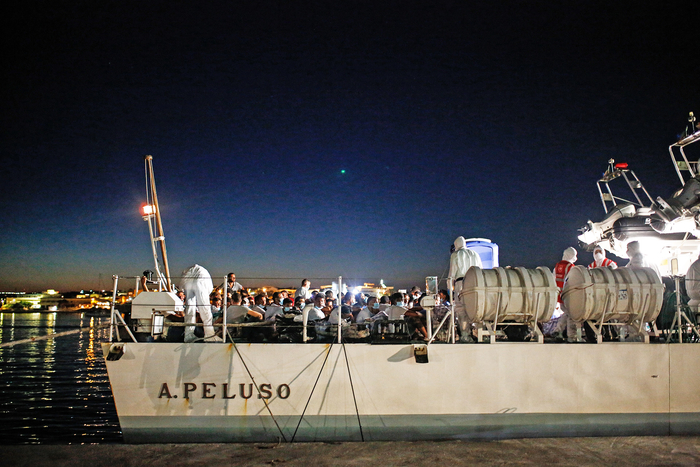 Sara Creta/TNH
Migrants on board a Coast Guard ship, the “Peluso”, wait to be transferred to Porto Empedocle, Sicily.

“People on board lack information about their future, and support to overcome the feeling of despair that this situation may have triggered, and that led to a tragic end,” Mauro Palmo, Italy’s national guarantor for the rights of detained persons, said at the time.

Bilal’s death triggered a protest by a group of Tunisians who wanted to disembark from the ferry, and Red Cross volunteers had to step in to prevent the situation from escalating. “It was a nightmare. Everyone was shocked, as we couldn't prevent [Bilal’s death] from happening,” one Red Cross volunteer, who was on board the quarantine vessel and spoke on condition of anonymity, told TNH. “We are just volunteers, but we asked ourselves why people are not quarantined on land.”

More recently, Abou Diakite, a 15-year-old from Ivory Coast, died after being urgently evacuated from a quarantine ferry on 30 September. His cause of death is still undetermined. According to a medical certificate seen by TNH, Diakite showed signs of torture and symptoms of “strong malnutrition and dehydration”.

The doctor who examined Diakite on board the ferry prior to his evacuation – and failed to detect any serious medical issues – was a recent graduate with little prior experience, according to Michele Calantropo, a lawyer representing Diakite’s court-appointed guardian in a case investigating the cause of death. “Prompt access to qualified medical healthcare is crucial for people who experience any form of torture during their journey and survived the sea crossing,” Calantropo said. 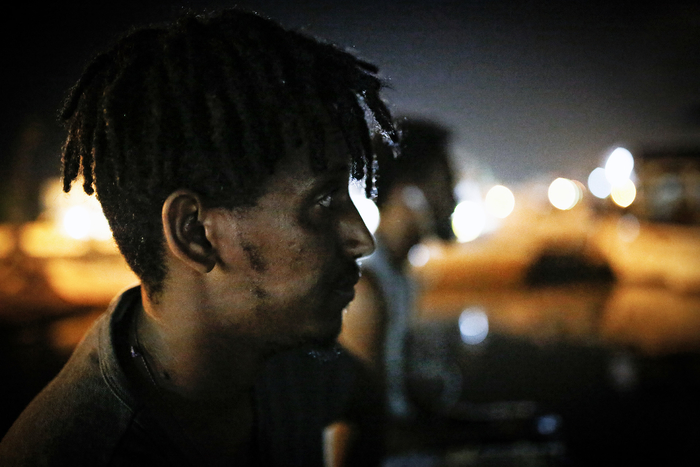 Sara Creta/TNH
An Eritrean asylum seeker who recently arrived from Libya waits in Lampedusa before being transferred to Sicily.

Two other people have died in recent months after being held on quarantine ferries, according to the Italian Red Cross office in Sicily, including an underage Somali asylum seeker. And at the end of October, nine Tunisian men were evacuated from one of the ferries after attempting to harm themselves by swallowing razor blades.

But a doctor who worked with the Italian Red Cross on one of the ferries said there are only two doctors, three nurses, and two psychologists on board to serve the needs of around 200 people.

Palma, the guarantor for the rights of detained persons, inspected one of the ferries in September and found that it had adequate living conditions. “Migrants have a cabin each, and those who test positive are hosted on a separate deck from the others,” he said.

Pictures and videos filmed on one of the ferries and shared with TNH by asylum seekers, however, appear to show trash strewn hallways and poor hygiene conditions.

Civil society organisations say that asylum seekers are not informed of their rights after being disembarked from the ferries. Instead, they are often issued orders of removal that are often not enforced, leaving people to either become undocumented or travel irregularly to other European countries.

But under a repatriation agreement between Italy and Tunisia, up to 120 people are sent back to the North African country each week. Majdi Karbai, a member of the Tunisian Parliament who represents Tunisian citizens in Italy, said that Tunisians who are held on board the quarantine ferries are often automatically repatriated before they can apply for asylum.

“They are notified with an order of removal the same day that the forced return takes place, to mitigate the risk of escape or resistance,” he told TNH. “Everyone is brought directly to a repatriation centre and then sent directly back to Tunisia.” 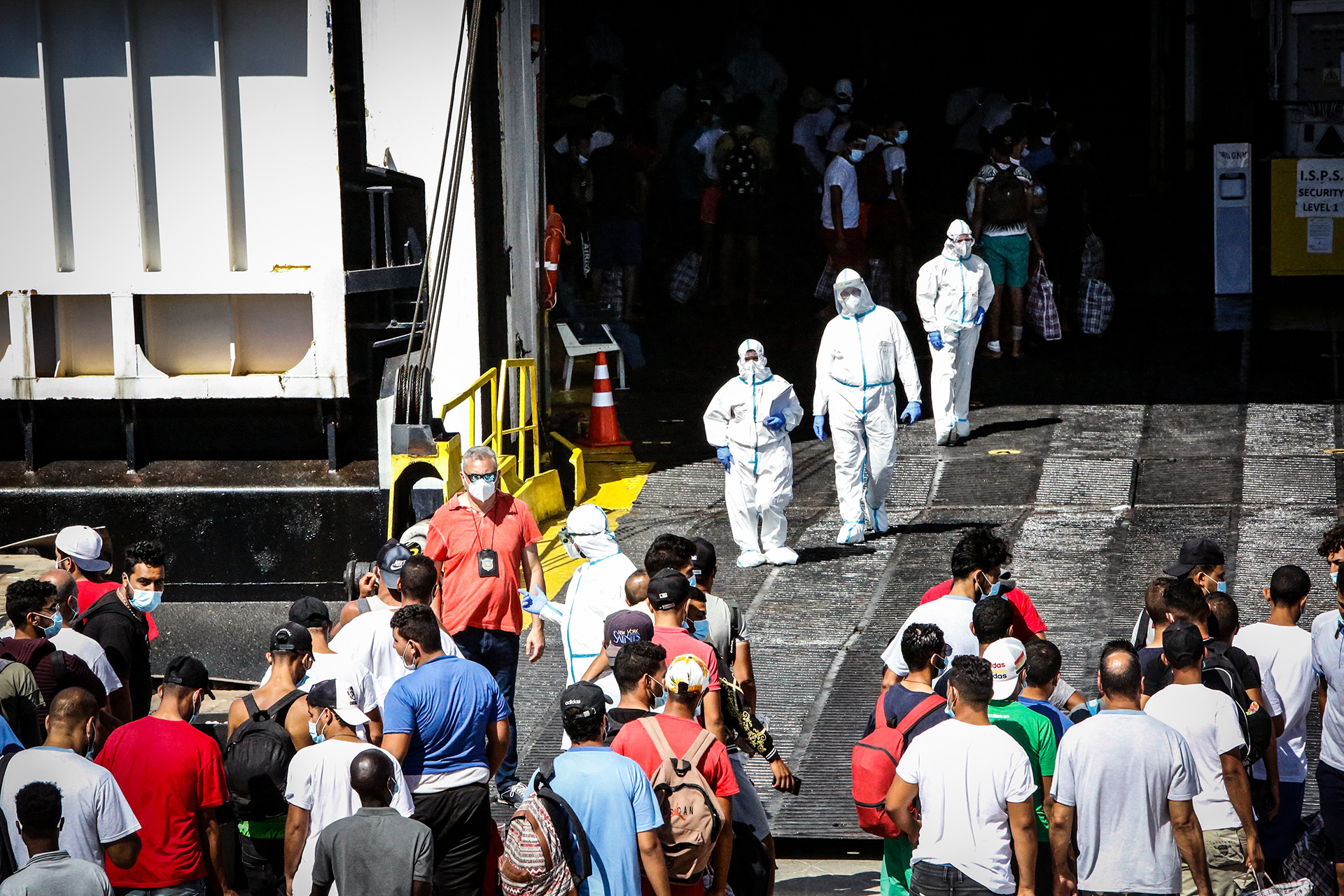 Gulia Gianguzza, a social worker with the Italian civil society organisation ARCI, said that a Nigerian man with a relatively fresh gunshot wound in his leg was also issued an order of removal after being disembarked. “He was very confused and he was not at all aware of the expulsion order he had in his hands or the possibility of asking for asylum,” she added.

An unaccompanied minor from Burkina Faso faced a similar situation. He was issued an order of removal without being given information about asylum or his rights as a minor, according to Gianguzza, who cited the cases as evidence of a broader trend.

Neither the National Red Cross nor the Italian Ministry of Interior responded to requests for comment in time for publication.

At the beginning of October, the Italian government adopted a new decree rolling back aspects of the previous government’s hardline, anti-migration policies, but civil society groups say the quarantine ferries demonstrate that Italy’s overall approach to migration across the Mediterranean remains unchanged, and they worry that the ferries will become permanent fixtures used to restrict access to asylum and deter arrivals.

“The conditions on the ships, their structural isolation, the difficulty of monitoring [the situation on board], and the impossibility of the contacts with civil society make this formula absolutely inadequate for carrying out delicate reception procedures… [to determine] the legal status of foreign citizens,” said Fachile, the ASGI lawyer.

Additional reporting from Palermo from Chiara Denaro, a postdoctoral researcher in sociology at Trento University.