When Abdoulaye fled violence in Mali in 2012, he crossed the border to a refugee camp in then-peaceful Burkina Faso. But in March this year his camp came under fire from extremists, leaving the 37-year-old and his family unsure where next to turn.

“I don’t think I can go back to Mali, but being here and seeing the situation Burkina Faso is currently facing, I don’t know my fate,” he said, asking for his surname to be withheld for security reasons.

Attacks by self-defence groups and extremists linked to so-called Islamic State and al-Qaeda have increased dramatically in Burkina Faso, displacing almost 850,000 people – all but 80,000 since the start of 2019 – and leaving two million in need of humanitarian assistance.

The violence has also upended the lives of some 25,000 Malian refugees who, like Abdoulaye, have been depending on the country for security but are now weighing their options following attacks that have emptied their camps and yanked away the little assistance they were receiving.

Since the violence in Abdoulaye’s camp, which is called Goudoubo, thousands of residents have returned home to Mali, believing the situation in Burkina Faso to be worse now than the crisis in their own country, while others have moved to safer towns away from the camp.

Residents of a second camp, called Mentao, have also come under attack in recent months from both extremists and Burkina Faso’s military, forcing aid agencies to abandon their activities and the majority of the inhabitants to move to safer areas.

“Refugees are now facing a dead end, stuck between violent extremism and a pandemic.”

Thousands from Mentao have requested to be assisted through a voluntary repatriation programme run by the UN’s refugee agency, UNHCR, but coronavirus-related border closures mean the programme has been temporarily suspended.

“Refugees are now facing a dead end, stuck between violent extremism and a pandemic,” said Florence Kim, a regional spokesperson for the UN’s migration agency, IOM.

Malians began fleeing to Burkina Faso in 2012 after Tuareg rebels and Islamist militants capitalised on a military coup in the capital, Bamako, to capture vast swathes of land in the desert north.

A French-led offensive dislodged the jihadists from several towns, but they soon regrouped in Mali’s hinterlands, before pushing south and spilling across the border into Burkina Faso – now the epicentre of a regional crisis.

The spiralling internal displacement and vast assistance needs in Burkina Faso have captured the attention of aid agencies, but just 12 percent of the $12.5 million requested by UNHCR to support refugees this year has been received to date.

Many refugees had already left Burkina Faso before the recent camp attacks, as support dwindled. But, until this March, thousands were still living in underfunded sites in northern Burkina Faso, including 9,000 in Goudoubo, in Seno province, and around 6,500 in Mentao, in Soum province.

The vast majority have now left.

In March, men calling themselves “terrorists” entered Abdoulaye’s camp, beat his wife, younger brother, and his three children, before binding their hands and stealing their cows, cash, and motorbikes. Camp residents were then told they had five days to evacuate – an order few dared disobey.

Abdoulaye, who said he sometimes wakes up in pools of sweat to the sound in his head of a cocked gun, doesn’t know if the men were searching for him specifically or just wanted to rob somebody with money.

But Héni Nsaibia, a Sahel researcher at the conflict monitoring group ACLED, told TNH the attacks point to an evolving strategy by extremist groups seeking to expand their control over rural areas.

“The strategy behind the depopulation of the Goudoubo camp is to transform a contested area into a guerrilla one and should be viewed through the lens of militant expansion,” said Nsaibia.

Attacks on Mentao camp – located in one of the most volatile parts of Burkina Faso – started a year ago when a doctor, nurse, and driver were abducted in an incident that forced UNHCR and other aid agencies working there to relocate staff.

“They said they would come back after three days and spare nobody.”

Monique Rudacogora, a UNHCR official in Burkina Faso, said there has been no working health facility in the camp for six months, while access to schools and markets is limited. Insecurity has worsened in the past few weeks, Rudacogora added, leaving only around 10 families in the camp.

The refugee agency said it is in talks with the government to safely move residents who fled both camps back to Goudoubo, but the security situation remains fragile and refugees from Mentao doubt the military’s capacity to protect them.

At least 32 Mentao camp residents were injured earlier this month – some seriously – when soldiers stormed the area, accusing refugees of complicity with extremists – the latest in a string of incidents that has eroded their trust in security forces.

One refugee told The New Humanitarian that government soldiers hit him with wooden sticks, adding that others had limbs broken as soldiers went from tent to tent whipping residents including children.

“They said they would come back after three days and spare nobody,” the refugee said.

The government said its soldiers were pursuing “terrorist” fighters who ran into the camp after launching an attack, but that it regretted the situation and would open an investigation to establish responsibility on both sides. 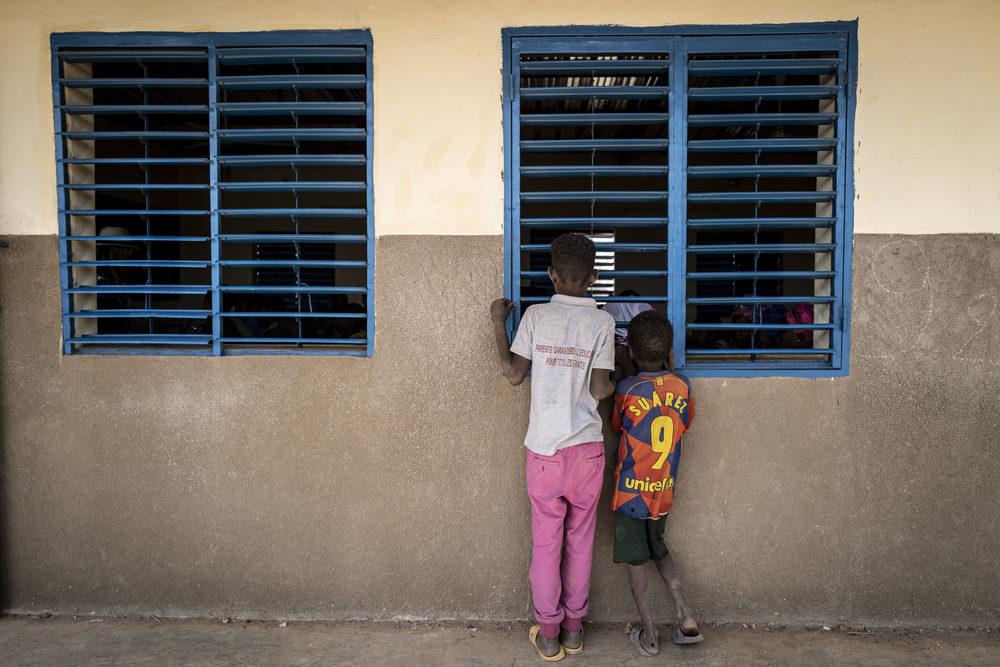 Sylvain Cherkaoui/UNHCR
Malian refugee children peek into a school in Goudoubo camp in February. There has been no working health facility in the camp for six months, while access to schools and markets is limited.

In a scramble to leave Goudoubo in March, approximately 4,000 refugees made the difficult decision to return to Mali, through a UNHCR-run voluntary repatriation programme.

The scheme offers approximately $60 for transport per refugee, as well as information about the situation in the area they’ll be returning to. Since starting in November 2014, it has helped more than 11,300 Malians return home.

But coronavirus restrictions have since put the programme on ice, leaving 4,000 residents from Mentao who had requested to be repatriated in limbo. Most have since relocated to Djibo, a large town in the north where attacks often occur, and where food and shelter options are limited, according to Rudacogora.

Many refugees don’t want to go back home, however, as conflicts escalate in Mali, and a 2015 peace agreement – signed between the Malian government and armed groups – continues to stagnate.

Fearing the worst, approximately 2,500 Goudoubo residents moved in March to a makeshift displacement site in the nearby town of Dori, while others dispersed across the country. UNHCR said it has provided the residents with three months of rent support.

“They did not want to go back because they felt it was unsafe… and [they] are still seeking international protection,” said Rudacogora.

From a well-known family in Mali’s northern city of Gao, Abdoulaye is particularly concerned about returning home. He said his uncle and brother left camps in Burkina Faso for Mali in 2016 and 2017, only for both to be killed by jihadist groups weeks later.

“They came to take [my uncle] at his house and told him: ‘Today is your turn, we have been looking for you for a long time. Say goodbye to your family,’” said Abdoulaye. “They dragged him 200 metres from his house and shot him.”

Seated on the floor of a relative’s home in Ouagadougou, Abdoulaye thumbed a copy of his asylum papers. Eight years after applying for protection, he is still waiting for an answer. “It’s very important, because my entire future is based on it,” he said.

Thirty-four-year-old Abdou – who also asked to be referred to only by his first name – said his family returned to Mali in December 2018 when a police station was attacked near Mentao camp. He said returning home was a “difficult choice”, but the decision was ultimately the right one.

“[We] ran away from Mali because of insecurity, but now there is insecurity where [we went],” Abdou said. “It’s better to go back to where everyone knows [us] in the village.”