The pale green identity card in Nurul Hoque’s hands is torn and brittle. Time has faded the image of his grandfather, taken years before, to a ghostly outline.

The worn document is his grandfather’s decades-old identity card from Myanmar. It’s proof, Nurul says, that he and his family are rightful citizens of a country that now rejects them.

“It’s all we have left,” Nurul says, placing the faded card on a thin sleeping mat in his family’s new home: a flimsy tent perched on a hilltop in southern Bangladesh’s sprawling Rohingya refugee camps.

The document and those held by other families in the camps are reminders of lives left behind, clung to with the distant hope that they might one day permit a return to Myanmar. But they’re also a record of the bureaucratic and often convoluted ways in which Rohingya in Myanmar have been systematically stripped of citizenship, belonging, and their very identity.

The question of citizenship in Myanmar strikes at the core of successive policies and actions that have disenfranchised, trapped, and now evicted hundreds of thousands of Rohingya.

The Muslim Rohingya may be the best-known example of statelessness in Myanmar, but several other ethnic minorities fall foul of its haphazard and selectively enforced citizenship laws. Created in 1982 by Myanmar’s then-ruling military junta, the law favours the majority Bamar community and others judged to be among the country’s “national races” and excludes others from full citizenship.

The government continues to build its stalled citizenship plans on the 1982 law, which stipulates that only members of ethnic groups that settled within Myanmar before the British conquest in 1824 are automatically eligible for full citizenship. But rights groups and the Rohingya themselves see the law more starkly: an attempt to make an unwanted population stateless.

"The Rohingya were made stateless in order to justify excluding them,” says Chris Lewa from  The Arakan Project, a Southeast Asia-based rights monitoring group.

Myanmar’s military launched a violent crackdown across northern Rakhine State last August, after a group of Rohingya fighters staged attacks on police and border posts. Nurul and his family joined more than 670,000 people who swept across the border into Bangladesh.

Most Rohingya lost nearly everything in the exodus, escaping on foot with whatever they could carry. One survey in Bangladesh’s refugee camps estimated that 94 percent of the new arrivals had no identification whatsoever. But some Rohingya families like Nurul’s rushed to save their now-scarce identity cards.

A dizzying array of official identity documents circulate among some Rohingya refugees: worn registration papers like the green card belonging to Nurul’s grandfather, frayed and yellowing temporary cards that replaced them, even crumpled up pieces of paper that served as receipts when the last official documents were stripped away.

Over decades in Myanmar, each form of ID was declared invalid or taken from the Rohingya; each replacement carried fewer rights and more restrictions.

The faded green card belonging to Nurul’s grandfather, officially called a national registration card, was given to non-foreign male residents of Myanmar, then known as Burma, after 1951. Female residents received a pink equivalent. 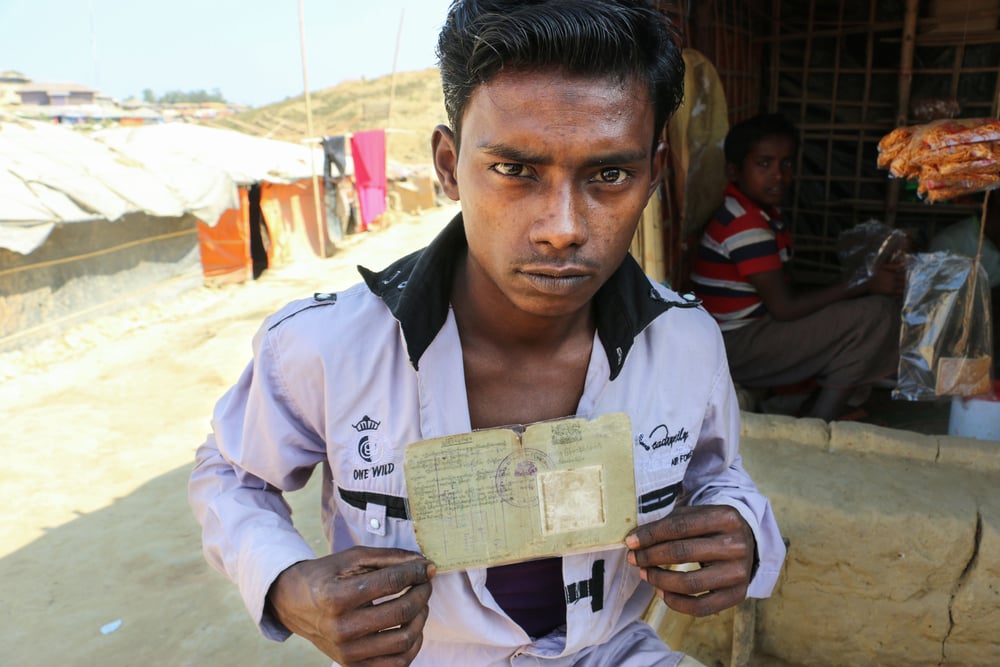 Verena Hölzl/IRIN
Nurul Hoque sealed his family’s ID cards and old photos in plastic after arriving in Bangladesh. He keeps them under his pillow when he sleeps.

In 1982, however, Myanmar’s then-ruling junta enacted its new ethnicity-based citizenship laws. Authorities collected the green and pink registration cards from the Rohingya, later replacing them with “white cards” — temporary documents that left a generation of Rohingya in legal limbo.

Understanding the importance of their grandfather’s green card, Nurul’s family buried the document deep in the ground rather than handing it in.

“We had to keep it as safe as possible,” he says.

Before his family fled Myanmar last year, Nurul hastily dug up the old ID, taking it to Bangladesh along with a few old photos and his own newer white card. Nurul sealed the tattered cards and photos in plastic casings after he arrived. When he goes to sleep at night, he places all the documents together under his pillow.

His cherished ID cards may be worthless in Myanmar, but for Nurul, they’re the only documents that show he once belonged.

“Maybe the day will come that I need the cards to prove where we are from,” Nurul says.

“No Rohingya in Myanmar”

"There are no Rohingya in Myanmar" is a slogan heard on a regular basis in teashops, at nationalist rallies, and even in Myanmar's parliament. A lawmaker recently asked the government to officially declare that Myanmar does not have a Rohingya ethnicity. Instead, many in Myanmar call the group “Bengali” — a derisive nod to their perceived origins, and a label that most Rohingya emphatically reject.

The Rohingya have a long history in the area now known as Rakhine State. But to many in Myanmar, they’re seen as intruders from Bangladesh.

See: The roots and risks of Myanmar’s new Rohingya insurgency

Hasina Khatun, 40, reached Bangladesh last September after a 13-day walk from her burnt village in northern Rakhine. In the previous five years, she says, local authorities had barred fishermen from her village from going out to sea, cutting off their main source of food and income. 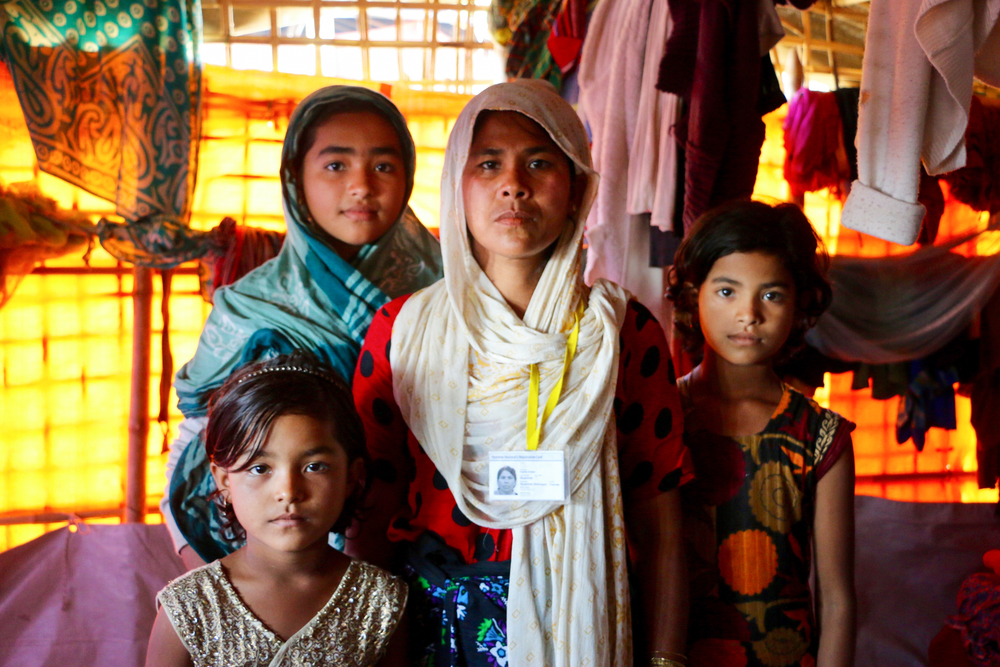 Verena Hölzl/IRIN
Hasina Khatun says she ran into her burning home to save her family's ID cards. "They show that we were once a part of Myanmar," she says.

But she also recalls a time when things were different. Her father, she says, was once a citizen of Myanmar, able to travel freely and conduct business. A generation later, Hasina wasn't allowed to leave her home after sunset.

Like Nurul’s family, Hasina hid her father’s green card, suspecting that she might not get an equally valuable document in return. Last September, Hasina says, soldiers set fire to her home in Rakhine State. Before she fled, she jumped into the burning home to salvage her family’s identity documents.

Her neighbours told her she was crazy to try something so dangerous. But to her, the documents are invaluable.

“I lost my money, but at least I could save the ID cards,” she says. “They are more important to us anyway. They show that we were once a part of Myanmar."

There are 135 officially recognised ethnic groups in Myanmar. The Rohingya aren’t one of them.

Nick Cheesman, a researcher at the Australian National University who has studied how law is used for political purposes in Myanmar, says the divisive 1982 citizenship law laid the groundwork for ethnicity to be tied so closely to citizenship. While Cheesman says the law is still technically broad enough to grant citizenship to the Rohingya, in practice, it has been used to shut them out.

"In Myanmar, membership of a national race has surpassed citizenship,” he says. “Consequently the Rohingya try to be recognised as such, which makes other groups in the country angry.” 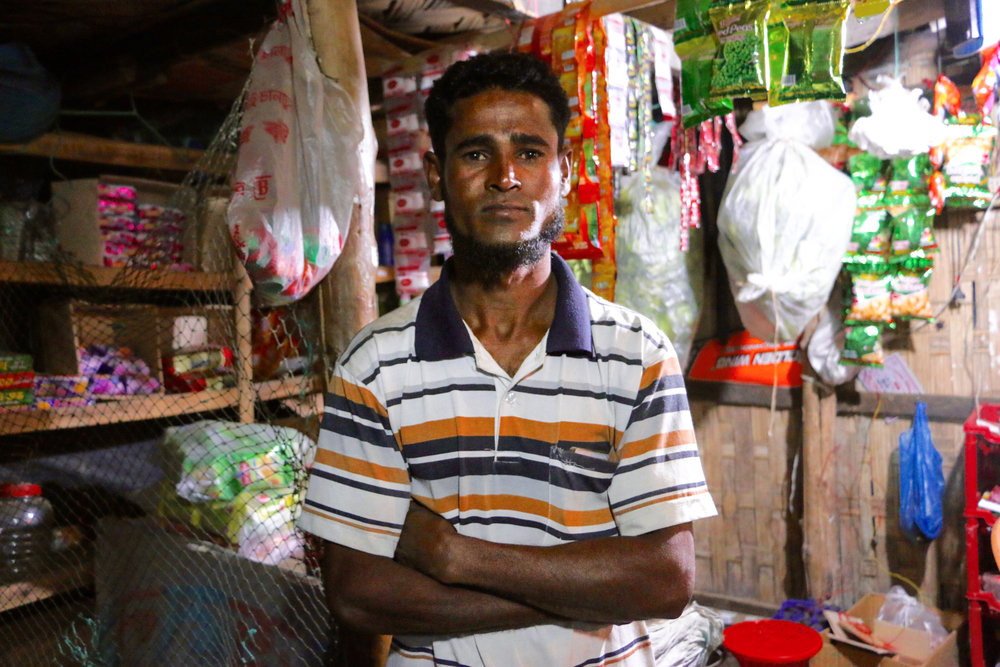 Verena Hölzl/IRIN
Hashim Ullah, 30, lost all his important papers when he fled Myanmar. His only ID is a refugee card issued in Bangladesh. It grants him little in the way of rights, but allows him to eat: “Without this card, I can’t get food rations,” he says.

Even with the majority of northern Rakhine’s Rohingya population now ousted from the country, new forms of identification keep piling up.

Myanmar authorities want the Rohingya to apply for yet another type of ID: “national verification cards”, part of a highly criticised multi-step citizenship process. While the government says cardholders will eventually be able to apply for citizenship, most Rohingya refused to sign up, fearful that yet another new identification card would leave them even worse off than before.

The process also initially required Rohingya to self-identify as “Bengali” — a deal-breaker for most Rohingya. As of the end of last year, only about 7,600 of these cards had been issued since 2010, according to government statistics.

In Bangladesh’s refugee camps, authorities have registered the incoming refugees using biometric data. The resulting plain cards identify cardholders as “Myanmar nationals”. For most Rohingya now living in the camps, the cards are the only official ID tying them back to their home.

See: The risks of registering the Rohingya

Before 55-year-old Lalu fled Myanmar last year, authorities there forced him to return his “white card”, which the government invalidated in 2015. While these temporary cards fell far short of any form of acknowledged citizenship, they had still permitted Rohingya holders to vote in elections, until the 2015 general election that saw Aung San Suu Kyi’s National League for Democracy sweep to power.

In exchange for his white card, authorities handed Lalu a slip of paper.

He says authorities in Myanmar told him he could go anywhere with the document. “But in reality, I couldn’t even move one kilometre,” he says bitterly.

Still, he holds on to the receipt, folding the paper six times and putting it back in his pocket.

(TOP PHOTO: Before his family fled Myanmar last year, Nurul Hoque dug up his grandfather’s old ID, taking it with him to Bangladesh along with old photos and his own identification cards. He hopes they will one day help prove where he is from. Verena Hölzl/IRIN)

(Photos of identification cards have been edited to remove personal information)