The informal system of shelter ownership that has sprung up in refugee camps in Kenya and elsewhere has allowed entrepreneurial activity to flourish, but it is also unregulated, corrupt, and leaves some refugees vulnerable to losing everything.

“It was more than just our source of income. It was the place we called home. And now, after they’ve taken it and given it away, it’s just a place to sell cheap Ugandan beer.”

Daniel’s email suggests bitter defeat. He has attached a photo of himself standing proudly outside the shelter-cum-printing studio he and his wife ran in one of the Kakuma refugee camps in northwestern Kenya. That situation came to an abrupt end recently when Daniel was accused by his landlord of defaulting on his “rent”, charged by the police for failing to vacate the shelter, evicted, detained, and finally released without being assigned a new shelter.

Outside Daniel’s old home, the sun-drenched street is bustling. Sales clerks, bike mechanics, and hairdressers chat busily with customers and friends. A noisy diesel generator rumbles in the background, providing electricity to local homes and businesses. It’s a far cry from the images of idle, tent-dwelling aid recipients that have dominated popular depictions of refugee camps.

“We don’t reap huge profits,” says Abdul, who fled Somalia in the late 1990s and now operates a cinema and electricity-generating service in Kakuma. “We are struggling to manage our lives, but we thank God that we are not begging and asking others to manage our lives for us.”

The first refugees arrived in Kakuma more than 25 years ago and, according to the last count, the camps are now home to 155,000 people. The UN’s refugee agency, UNHCR, provides no electricity and only very limited firewood rations. In recent years, the World Food Programme has been forced to reduce monthly food rations by as much as half. An informal camp economy has developed to fill the gaps in aid delivery and provide a vital income to camp residents.

“As a single mother, I needed more than the food supplied by the UN,” explains Axlam, a Somali woman living in Kakuma. “So, I came up with this plan of baking and selling biscuits.” Her income from selling biscuits means she can buy extra food as well as school supplies and medications for her children.

Most camp businesses – restaurants, barbershops, and even a cyber café – operate out of modified structures originally built as shelters. Each new arrival receives a randomly allocated shelter free of charge, depending on where space is available. But, especially for entrepreneurs like Axlam, location matters: businesses thrive closer to market areas and the main highway. 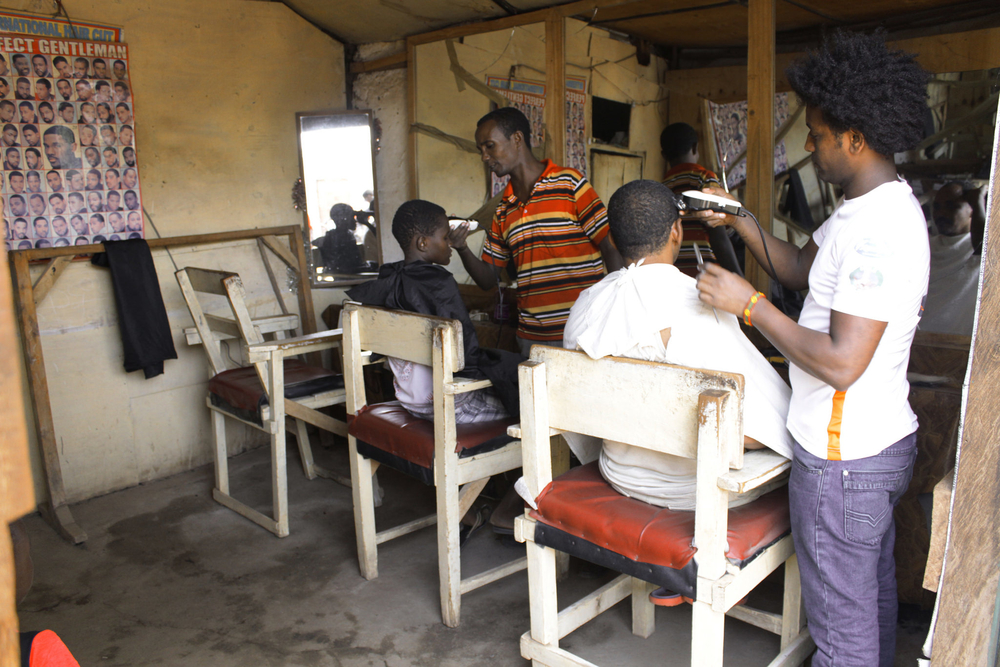 When Daniel arrived four years ago, after fleeing political persecution in Ethiopia, he was allocated a shelter in the relatively remote Kakuma 3 Camp. Daniel needed money to pay for medication for his wife’s chronic renal condition. With the aim of opening a small printing studio in the market, where he would have a customer base and access to electricity, he made an informal agreement with another refugee living in the market area who had expanded his shelter. Daniel agreed to pay him 5,000 Kenyan shillings per month (about $50) for two rooms: one to live in and one for his shop. After reaching 200,000 Kenyan shillings in payments ($1,915), registration of the shelter would be transferred to him.

UNHCR supports refugee self-reliance. Multiplying refugee crises and growing shortfalls in donor funding mean that promoting refugee livelihoods has become an increasingly important focus of the agency’s work. But in countries like Kenya, where the host government restricts refugees’ freedom of movement and right to work and where the majority of refugees are still confined to remote camps, the agency faces a dilemma. The informal “real estate” market in Kakuma goes against UNHCR’s policy on the free provision of shelters, but with no formal route to acquire a place to do business, it is the only option for camp-based entrepreneurs.

This dynamic is not unique to Kakuma. In Uganda’s refugee settlements, government officials have complained that before moving, some refugees sell their land allocations to other refugees. Farm plot allocations in the Nakivale settlement, for example, are often sold by Somalis to obtain start-up capital for shops in Kampala. In the camps administered by UNRWA in Lebanon, Rayyar Marron has described the informal real estate system among Palestinian refugees, and a similar system operates in Jordan’s Zaatari camp where shelters in the Champs-Élysée market area command high “rents”.

The informal system makes it possible for industrious camp residents to make a living, and the income from shelter and business sales can make it easier for refugees to fund repatriation or ease the transition to resettlement countries.

But the black market in refugee real estate also foments disputes and corruption. 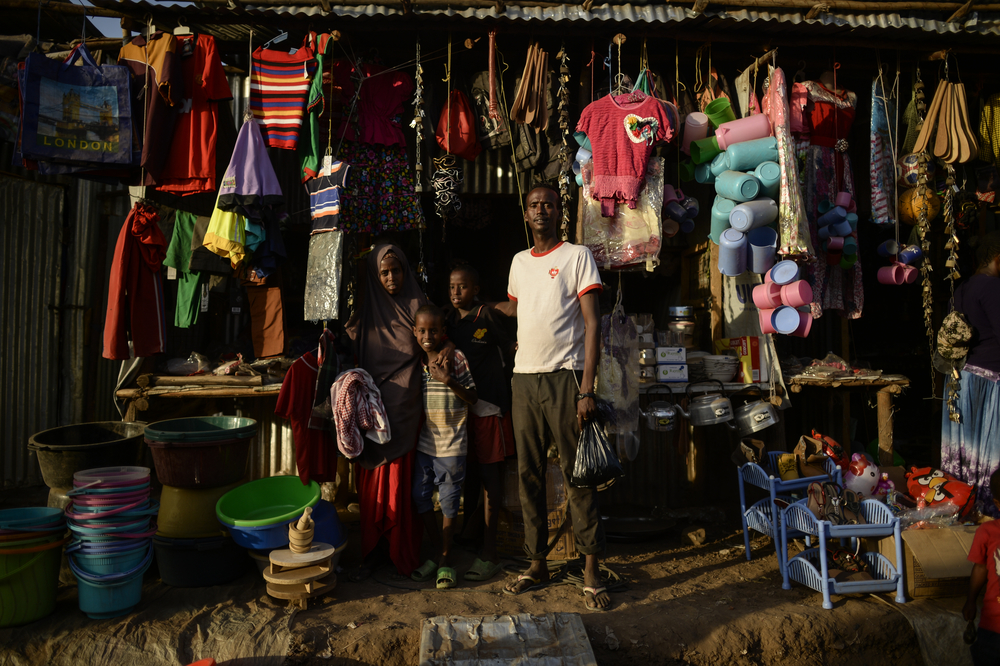 Refugees leaving Kakuma are required to surrender their shelter to the government’s Department of Refugee Affairs – recently restructured as the Refugee Affairs Secretariat – for reallocation. But many refugees move to Nairobi without notifying the DRA and others pay “fees” to DRA staff to maintain their shelter registration. Refugees about to be resettled to a third country or returning home sometimes “sell” their shelters to other refugees before they depart. A bribe is paid to someone at the DRA who transfers registration to the buyer.

Daniel had nearly completed his 200,000 Kenyan shillings in payments when his refugee “landlord” moved to Nairobi and – in need of money – decided to sell the shelter to another refugee. Daniel was told to leave, but refused. His landlord filed a complaint with the police, money changed hands, and Daniel was evicted from his shelter.

UNHCR often tries to resolve such disputes, but its mediation is unofficial and once someone takes a case to the police, the agency is sidelined.

“The police are supposed to solve land conflicts and refer the case for resolution,” says a refugee with experience in shelter disputes. “However, if the police see money in the conflict, they take bribes from both parties. The winner is often the one who paid more.”

Refugee entrepreneurs who can afford to pay higher bribes can acquire a significant portfolio of shelters, becoming what some have termed “refugee real estate tycoons”.

In 2015, UNHCR signed an agreement with the Turkana County Government to create a new refugee settlement at Kalobeyei, just north of the existing Kakuma camp. Relocations began last year. Kalobeyei is being billed by UNHCR as a new approach to refugee assistance that promotes the self-reliance of refugees and equally impoverished host communities.

A UNHCR official explained to IRIN that business development at Kalobeyei will occur by facilitating informal market activities: “We want them to do it themselves: the [refugee] traders and the host community. Our job will be to create the environment for this to happen, to demarcate the commercial spaces.” 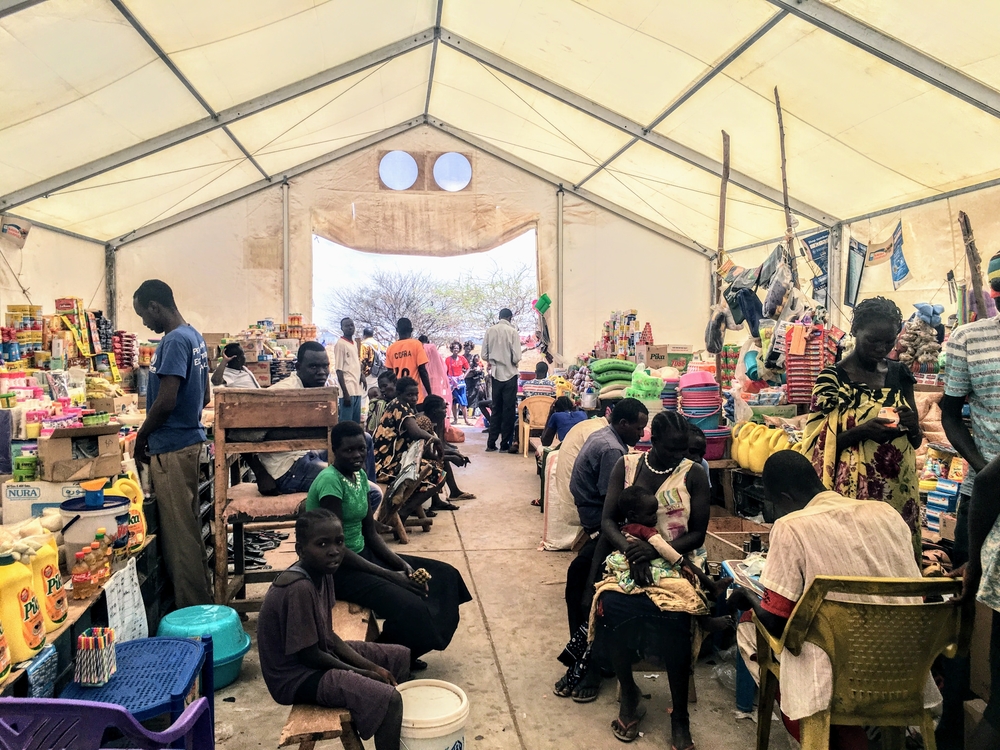 UN-Habitat
A market at Kalobeyei Settlement

But encouraging informal business activity is not the same as providing protection for property and assets. The lack of a legal system for refugee property in Kalobeyei may leave refugee entrepreneurs feeling vulnerable and wary of investing in non-movable assets. As Daniel told IRIN: “I had a plan to develop my studio into something big. I had the potential for it. But if I fear that one day they will come and force me to leave… you stop thinking about investments.”

Jeff Crisp, former head of UNHCR’s Evaluation and Policy Analysis Unit, told IRIN that “amongst all the protection problems confronting camp-based refugees, those arising from the informal market in plots and shelters are the least well documented and most poorly understood by humanitarian organisations.

“They must be given much greater attention if refugees are to realise their full entrepreneurial potential.”

Yet UNHCR is facing a difficult political landscape in Kenya. Caught between a local government eager to direct humanitarian resources toward local voters, and a national government that has promised to shut down Dadaab – the country’s largest refugee complex – by the end of May, UNHCR has very little space to advocate for refugees’ rights. There is also no legal framework that allows the agency to regulate land use or ownership.

UNHCR and refugee advocacy groups are now pushing for the introduction of a bill to update Kenya’s current refugee legislation. The draft bill includes protections for movable and immovable property, and would set up a trust to compensate refugees for legally held property following resettlement or repatriation. But these protections would not be applicable in areas designated as camps and settlements, leaving camp-based refugees to pursue livelihoods in the unregulated informal economy.

Daniel and his wife – now pregnant with their first child – are staying with friends while they await a new shelter allocation. Having lost three years of investments to the dispute with his landlord, Daniel is unsure how he will find the capital to re-open his studio.

“It is like I am starting from zero. Maybe less than zero.”

(TOP PHOTO: A refugee in her shelter which has been converted into a shop at Kakuma camp)