Heavily pregnant Sneen kneels at the entrance to her tent, trying to shade herself from the searing sun overhead and keep the dust out of her eyes.

The 23-year-old, who gave  her first name, arrived at Khazair camp, next to the checkpoint of the same name on the border between central Iraq and the semi-autonomous northern Kurdistan region, on 14 June with her three children and mother Beduwa. She fled fighting in Iraq’s second largest city, Mosul, in the middle of the night.

“It was night time and there was bombing. We don’t have a car so we were walking and there was fighting very near,” she said, explaining how her husband, a taxi driver, had been working in the capital Baghdad and was now stuck there due to the roads being blocked by militant checkpoints.

Khazair camp lies approximately 100km west of the Kurdish capital Erbil and 53km east of Mosul, recently overrun by militants from the Islamic State in Iraq and the Levant (ISIS).

ISIS and other Sunni militants have been fighting the Shia-led government in Iraq for months, but in the past few weeks, this new militant advance has driven some 500,000 people from their homes, according to the UN, bringing the total number of displaced since January to 1.2 million.

Khazair, covering three hectares, is now home to an estimated 1,400 internally displaced persons (IDPs), though the numbers fluctuate daily. It is one of two transit camps currently in operation though several more are under construction. The rest of the displaced are living in urban areas. (See IRIN’s analysis on the wider IDP response)

The camp has provided Sneen and the other arrivals with shelter and safety, but there is little comfort to be found on what is a flat and exposed piece of land that just a few weeks ago was a wheat field.

Only a few metres from the checkpoint, the site is dry and bare and women wrap scarves around their faces to protect themselves from the fierce heat and the swirling dust.

“It is so hot here,” Sneen said. “My oldest child can’t sleep. She keeps waking up and crying. She needs some cold water and a shower. It is so hot.”

Apart from rows of blue-and-white branded UN Refugee Agency (UNHCR) tents and some latrines, there is little else at Khazair.

It is not hard to see why so few families have stopped here and why most have continued on towards urban areas.

Modher Alhamadani, who coordinates emergency response and migration health for the International Organization for Migration (IOM), said the poor conditions were linked to plans to relocate the camp.

“The government is planning to move the families to [a] more permanent camp and this is why the government and other agencies are unable to invest in this location,” he said.

“This means the IDPs are in a terrible situation… There is no electricity or enough water for them.”

He said the UN Children’s Fund (UNICEF) was distributing drinking water but it was not enough for daily use, and sanitation was poor: “If you stand there for 10 minutes you can smell the bad odour.”

During IRIN’s visit to Khazair, Kurdish staff from a local restaurant arrived to hand out food from the back of a pickup truck.

Sneen’s mother, Beduwa, like many others was in the queue but arrived too late.

“Now we have nothing to eat,” she said, visibly upset as she walked back to her tent empty-handed.

Nearby, Zaid, 35, from Mosul, also complained about the lack of food.

“We share what food we have,” he said. “So far no organizations have brought food, only families and local businesses. We’re very hungry and there is not enough to eat.” 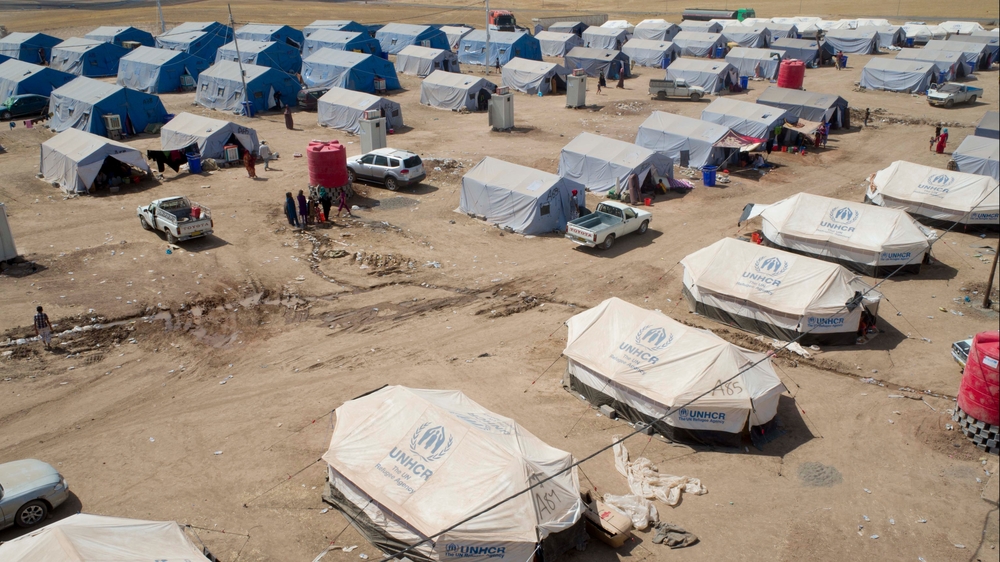 “We are looking at the needs. We are on the move and we are providing food,” she said.

“Because it is a transit camp and people are coming and going, perhaps people who just arrived didn’t receive food this time, but we are there to provide everyone who is there with food.”

Khazair sits in Nineveh Province, parts of which are disputed between the Kurdish authorities and the central government in Baghdad. The area in which the camp is located is controlled by Kurdish military Peshmerga forces.

According to UNHCR, the camp will shortly be relocated to the other side of the checkpoint, inside the Kurdish province of Erbil. Vian Rasheed, of the Kurdistan Regional Government (KRG)’s Erbil Refugee Council, said the move was to allow more space for the camp so it could host more families.

It will, however, take a month to prepare the new site, UNHCR has said, and in the meantime Sneen and her family must put up with the existing conditions in the sweltering summer heat.

The situation is not reported to be much better at Garmawa camp, also inside Peshmerga-controlled Ninevah but closer to Duhok province, which hosts 157 families or just short of 1,000 people.

Dindar Zebari, deputy head of KRG’s Department for Foreign Relations, which is leading the IDP response, said that while IDPs could not be forced into specific locations, camps remained a priority for the government.

“Camps will be the main strategy, though of course, if we have people who are willing to stay outside the camps and in cities and if they have some means to cope with it and some financial capacity, that’s fine.”

But not everybody has the means to pay for hotel rooms. Many families are living rough around the cities of Erbil and Dohuk, camping out in parks and fields, or sheltering in mosques and churches.

Catherine Robinson, a public information officer with UNHCR in Erbil, said IDPs living in mosques and unfinished buildings needed to get into proper shelter.

“They need to be in secure environments and to have their physical, medical and psychological needs met,” she said.

In addition to the facilities at Khazair and Garmawa camps, land is also being prepared for a site called Zummar, also in Peshmerga-controlled Ninevah, close to the Syrian border and not far from the city of Tal Afar.

Across the other side of Kurdistan, in Sulaymaniyah Province, two camps are also tentatively planned: one in Kalar, where 3,000 families have recently arrived after fleeing fighting in Diyala Province to the south, and one in Chamchamal, close to the city of Kirkuk.

A sixth camp called Baharka, around 5km north of Erbil’s Ainkawa District, opened briefly last week but IDPs taken there did not want to stay due to the conditions, and it has since been closed.

The tented site, prepared initially for Syrian refugees and later adapted for IDPs who fled fighting in western Anbar Province earlier this year, has electricity and water, but it is in a remote location surrounded by fields.