Read about what we achieved.
NEW YORK

Scientists may not see Mad Max-style “water wars” ahead, but they nevertheless see strong relationships between conflict and climate change.

Whether dramatic changes in weather patterns drive conflict has long been the subject of great debate. Did a series of droughts precipitate the collapse of the Khmer Empire in the early 15th century, for example? Or was the Little Ice Age in the mid-17th century a leading cause of the rampant warfare in Europe, China and the Ottoman Empire?

But the complex forces shaping the world today rule out simple parallels or assumptions – let alone predictions of the future. Many scientists caution that a much hotter earth or catastrophic weather event could tip the balance in unforeseen ways. The Intergovernmental Panel on Climate Change Fifth Assessment Report says there is “justifiable common concern” that climate change will increase the risk of armed conflict in some situations, even “if the strength of the effect is uncertain”.

Most studies currently describe climate change as a “threat multiplier” rather than a direct cause, just one of a host of interconnected factors – like poverty, exclusion of ethnic groups, government mismanagement, political instability and societal breakdown – that drive conflict.

“We lack the last piece of the puzzle that says that climate change causes conflict, but we know that there is a relationship between the variables,” says Koko Warner from the Institute for Environment and Human Security at United Nations University (UNU). “We don’t see people taking up guns because they lack fresh water or because sea water is pushing people into each other.”

Climate change is certainly throwing up new tensions between nations, as critical resources like water in cross-boundary river basins shrink and new opportunities for exploration and development open up in places once covered in ice like the Arctic. Scientists note however that tensions over water have so far led to more agreements than conflicts.

But, in its 2030 global trends forecast, the US intelligence community warns that “the fact that many of the river basins in the most affected water-stressed areas are shared means that interstate conflict cannot be ruled out – especially in light of the other tensions ongoing between many of these countries.”

Those areas with the most water stress – northern Africa, the Middle East, central and southern Asia and northern China – will also see the greatest population growth, creating even more stress on resources.

A wide-ranging research project undertaken by UNU on Climate Change, Hydro Conflicts and Human Security (Clico) – looking at the intersection between climate, water, conflict and security in 11 cases in the Mediterranean, the Middle East and the Sahel – did not find that climate change “is an important source of violence and insecurity” either between or within countries. However, the study found that firstly, states’ responses to climate change could create or worsen conflict; and secondly, that violence makes people more vulnerable to climate hazards.

Clico researcher Julia Kloos said one had to guard against making generic statements or drawing simplistic connections between climate change and conflict because every situation is different. “We have to look at it in a case by case way.”

Often, she said, adaptations by states to climate change, known as “divergent adaptation”, can negatively impact on vulnerable populations. In Niger, for example, droughts, floods and warmer temperatures have caused farmers to hold onto land and water in a way that (sometimes violently) threatens the livelihood of nomadic pastoralists. Conflicts over water have also erupted in Kenya and Ethiopia, affecting the most marginalised.

Turkana morans near Lokichoggio in northwest Kenya. Small arms are very common among pastoralists across the arid lands of northern Kenya 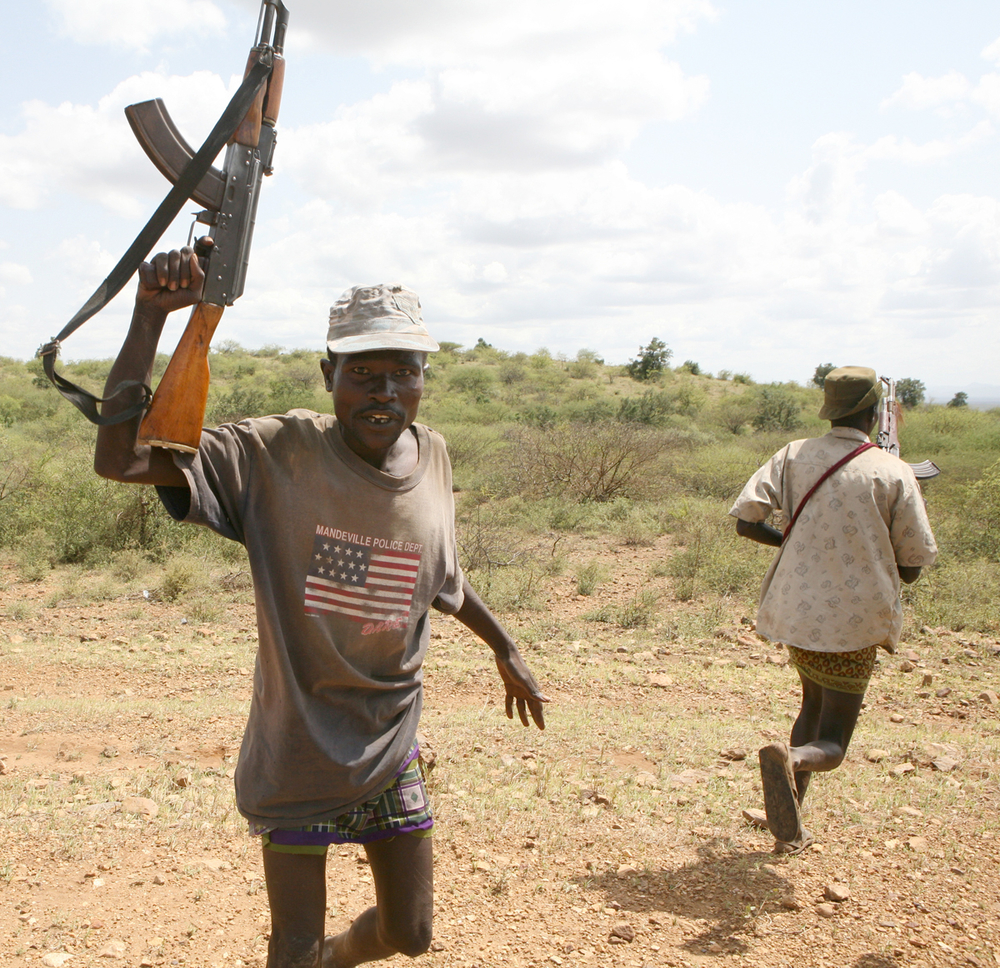 From drought to war?

Recent research linking the war in Syria to drought several years ago, describes the drought – and its mismanagement by the government – as a catalyst in the uprisings that led to civil war.

Whether the Palestinian-Israeli conflict will deepen or lessen over shrinking shared water resources is a leading question. Climate change threatens water supply in the Jordan River basin, shared by Israel, the Palestinian territory of the West Bank, and parts of Lebanon, Syria and Jordan. Despite soaring conflict in the area, Israel’s water desalination project has been punted as a prospect for peace and cooperation in the region.

The IPCC report says the chances of climate change-related conflict breaking out is greatest where states are weak, where property rights are contested, or where one group dominates another. Thus adaptation to climate change in South Sudan is more likely to cause conflict than a country like Italy, for example, as Kloos points out.

But pro-active measures by states, such as reclaiming forests to reduce carbon emissions, chopping them down for biofuels, establishing hydropower operations for renewable energy supplies, can create conflict and aggravate existing conflicts by pushing people off their land or robbing them of their livelihoods.

Says Warner: “We do know the impact that climate change is having on the most vulnerable people and that is cause for concern. When people are systematically shut out of decision-making, that can escalate into conflict.” Evidence shows, she adds, that social relationships are critical for survival. When drought threatened communities in India, people at first banded together. But when the drought became extreme, they began to hoard food. “Conflict comes in when people are not cooperating and when all the risk-management strategies break down really fast.”

Conflict in various forms is also more likely when climate change forces migration, and when viable institutions to manage their settlement and integration are lacking, says the IPCC report.

According to the Nansen Initiative, floods, earthquakes, droughts and rising sea levels forced 184 million people to leave their homes between 2008 and 2014. “Some projections suggest that a one metre rise in sea level could mean that 150 million people will have to flee unless the construction of dams, seawalls and similar measures are undertaken to protect vulnerable areas,” it says.

But Nansen Initiative envoy Walter Kaelin told IRIN: “I would be very careful in promoting the idea that global warming alone causes conflict. There are many areas affected by global warming and we don’t see conflict. We need other elements.”

However, he notes research that links drought in the Horn of Africa with a proliferation of small arms. He also points out that “conflict can exacerbate the humanitarian crises triggered by natural hazards and the cross-border flight of people,” noting that the refugees in Dadaab refugee camp in Kenya fled Somalia because of drought and famine, rather than conflict. Nevertheless, they fled because the conflict in their country prevented humanitarian aid from reaching them.

Holes in the goals

The Nansen Initiative notes that less than two months before the UN Conference on Climate Change in Paris, “the latest version of the draft climate agreement still does not include any references to climate-related mobility. And while the Sustainable Development Goal Number 13 is about taking urgent action to combat climate change and its impacts, and the ethos of the SDGs is all about “leaving no one behind”, there is no plan for how the most vulnerable people will be protected from the expected ravages of climate change in the next 20 years.

The South Pacific Island states are described as the “canary in the coalmine” for rising sea levels and other climate threats such as storm surges, sea acidification and more intense hurricanes and cyclones, threatening the lives and livelihoods of an estimated 500,000 people on these very low-lying coastal islands.

Recent UNU research in the region found that some of these people were migrating – mostly to Fiji – because of declining living standards. Interviewees only related 17 percent of their reasons for migrating to climate change. However, the study pointed towards “potential conflict between migrants and host communities” in future and called for more research on “conflict and migration in the Pacific”. Pacific Islands Forum secretary General Meg Taylor also recently spoke to UN Secretary-General Ban Ki-moon about the risk of conflict from climate-related displacement of people.

Cosmin Corendea, a former UNU researcher on the project, says people adapt to climate change when it manifests as a slow creep, believing they can deal with it. “Those with means choose to migrate first; some pledge to die on their land. You never know how people will react. They learn to live with all kinds of threats.” He adds that this does not diminish the urgency of climate change threats: interstate conflicts could emerge over who takes in migrants, and, if migrants are seen as not contributing to host countries, tensions can fester internally.

The draft text of the climate agreement leading up to Paris makes no mention of the role of conflict in climate change. Corendea says the policymakers tend not to tackle something if it doesn’t yet exist or require international intervention. “We are not there yet,” he says, adding: “At the same time, this doesn’t mean we shouldn’t consider conflict as a potential outcome if we don’t address climate change in the proper way.”