An angry man with a moustache gesticulates with a mobile phone. He is one of 15 mukhtars (community leaders) in a meeting with UN staff at a camp in northern Iraq. They are responsible for telling their neighbourhood what aid they can expect from humanitarian organisations.  “Look,” he shouts, “don't you know that the World Food Programme is giving food to Daesh?” (the Arabic acronym for the so-called Islamic State or ISIL/ISIS)

It might seem far-fetched, but aid diversion, or worse, collusion with ISIS, is a real concern for both those whose lives have been destroyed by the Islamist militants and aid workers. If people have evidence that it is happening, they ought to be able to report it and be confident that someone will investigate their claims. Previously in Iraq, that channel didn’t exist.

A communication gap has grown between the 3.1 million displaced Iraqis and the organisations supposed to serve them. Individual NGOs all provide different telephone numbers and displaced people often have little idea who can provide what aid and who they need to call for what service. Imagine you're a displaced Iraqi trying to get help on a complex matter. If only there was one simple number to call and someone could help you find the right person to speak to.

A new hotline is supposed to provide this, helping the displaced report their needs and get a better understanding of what help is out there. But with drastic cuts to services, can it make a tangible improvement to the way aid is provided? Or will they be a voice telling people that their food aid has been cut?

According to the United Nations Development Programme (UNDP), 78 percent of Iraqis use mobile phones. Yet despite this network, “displaced people in northern Iraq live in an information vacuum which is hindering their ability to cope with the catastrophe,” according to a report issued by a group of NGOs, UN agencies and media development organisations in September 2014.

Internally displaced people (IDPs) not only lacked information, they also had no way to explain what they really needed. “Nobody wants to talk to us,” a displaced man living in Duhok told a community consultation session organised by WFP. “Mostly they come to ask questions and leave.”

“We had various aid agencies coming and giving us different things like utensils, buckets, shoes, clothes, but we had no means to tell them about our special needs,” added a woman who fled Mosul when it was overrun by ISIS in August 2014.

One solution, the report concluded, was the rapid launch of a call centre run jointly by all the different UN agencies to provide the displaced with information and to refer complaints, feedback and urgent needs to the correct part of the relevant organisation.

At the end of last month, nearly nine months after the report was published, the call centre was finally launched with funding from the UN’s refugee agency (UNHCR), WFP and the UN emergency aid coordination body OCHA.

The idea is that having one number (6999) to call that covers the entire humanitarian response will streamline an often bewildering system.

The displaced often assume the aid system is one joint effort, when in fact it more closely resembles a series of interrelated but independent ones. For example, there are 54 humanitarian organisations providing medical assistance across Iraq's 18 governorates, coordinating their activities through the Health Cluster. A displaced person might need help from any one of them.

Previously, Iraqis would need to figure out which organisation provided the service in their area and contact them directly, or be referred through another NGO – often a convoluted and opaque process involving follow-up on specific cases by completely unrelated agencies. Now, they should be able to call the hotline and be referred directly.

An explanation of how the cluster system works 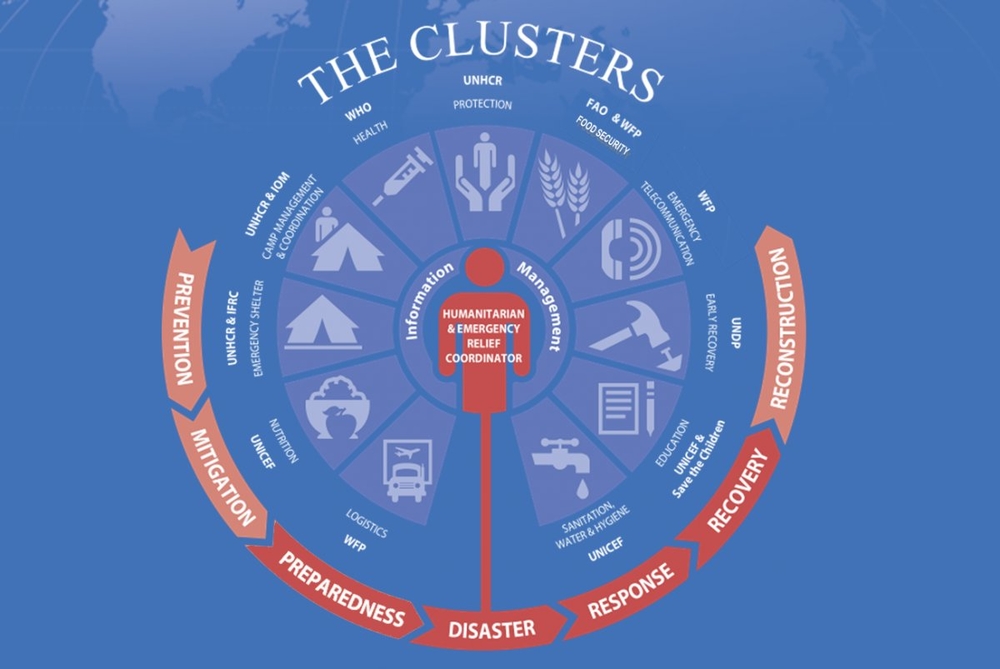 “I don't think [the IDPs] care that much,” observed call centre operator Karda Jiawook, when asked about public understanding of the complicated humanitarian system. “The only thing they care about is to have a direct answer about the issue.”

To give them this direct answer, call centre operatives use data collected by the clusters. They work out which organisation can help the displaced person in a certain location, or which one they want to complain about. They can also log the needs reported by that person, which feeds back into the cluster system.

“We have people who are very calm when they call and we have the opposite – people who are angry and frustrated,” said Jiawook. “We listen to them and try to calm them down.”

Following lengthy negotiations with three different mobile networks, the hotline will be toll-free by the end of August. Call centre operators speak Arabic, Sorani Kurdish and English; but they may also have to talk with IDPs in Badini Kurdish, or the Yazidi dialect.

“I hope the centre will achieve access to and understanding of the humanitarian response for the IDPs,” said Sarah Mace, Iraq IDP call centre coordinator. “As reported by many IDPs, there's a massive lack of information on services and how to access services.”

Mace said the call centre would allow the humanitarian community to “speak with one voice” and “become more approachable.”

Despite the optimism, it is too early to assess what impact the call centre can really have. In the 20 minutes IRIN spent inside the centre, no calls were received. In contrast, a UNHCR-led hotline for Syrian refugees in Jordan was handling thousands of calls a week when IRIN visited earlier this year. The Iraq team plays down such concerns, saying that the call centre is still being piloted and that publicity has not yet reached all governorates.

Even if it is a success, the centre can do nothing to help the fact that violence has made it impossible for aid workers to be physically present on the ground in huge parts of central, western and northern Iraq. If a caller from a besieged area of Anbar calls asking for help with medical supplies, the reality is that humanitarians can do little to help. At best, they can record a pressing humanitarian need. At worst, it may offer false hope of help.

This reality was highlighted during the ISIS assault on Yazidi communities of northern Iraq last year when humanitarian agencies and the UN Assistance Mission in Iraq ran a smaller hotline. The line was jammed with desperate people reporting that they were surrounded by ISIS fighters.

“The calls were either coming from Yazidis on and around Sinjar Mountain, or from people who claimed they were in direct contact with them,” said Brendan McDonald, an OCHA employee deployed in Erbil during those months.

“We were unable to offer them any solace. Any information we had on the humanitarian situation around Sinjar was unverified and sometimes inconsistent.”

“I remember one call in particular from a group of Yazidi women and children who were reportedly trapped in a settlement to the south of Sinjar Mountain, surrounded by ISIL and unable to move to Kurdish controlled areas,” he said.“Although we did pass the information on to those who possibly could do something, within a few days their phones went silent.”

The new call centre is also limited in what problems it can deal with. Operatives cannot assist callers with questions or complaints related to the government, sexual or gender based violence, or requests for asylum. If they receive reports of human rights abuses, these can be passed on to the UN Security Council. 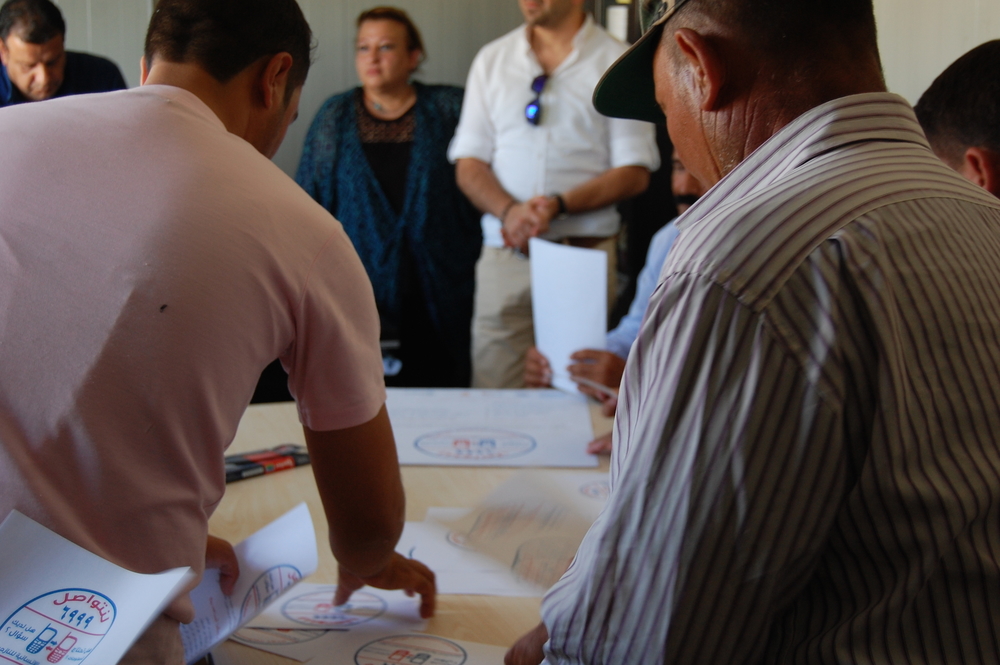 Call centre operators will, however, be able to provide a unified voice for the humanitarian response, particularly in the face of difficult questions about cuts to services. Funding shortfalls are leading to reductions in assistance all across the international response effort. In particular, WFP food vouchers have been slashed, with their monthly value down from $26 to $16 per person.

“For example, when talking about changes in the value of food vouchers, the reasoning given will be the same to every ethnic group in every area of the country,” explained Mace, “which will hopefully help to de-escalate tensions.”

The new project is still evolving. “Today I received a call that was a shelter crisis,” said Jiawook. The caller could no longer keep up payments on his rented house and was about to be evicted. He asked if he and his teenage son and pregnant wife could move to a camp. The call centre is coordinating the waiting list for spaces that have just become available at a local camp. Jiawook was able to add the family to the list.

“He was very glad,” said Jiawook, grinning. “I felt like if I was there he would have hugged me!”