After a weekend of violence that brought the country back to the brink, Egypt now stands at an impasse: Tens of thousands of supporters of deposed President Mohamed Morsi remain in the streets of the capital demanding his return to power. The army ousted the democratically-elected Islamist after millions of people took to the streets opposing his autocratic and exclusionary politics, and refuses to back down.

On 27 July, dozens of Morsi supporters were killed - most of them shot in the head or chest, human rights groups say - after they tried to extend their protest outside its main sit-in area in northeast Cairo. Since Morsi was deposed on 3 July, at least 281 people have died, according to Health Ministry figures, in clashes either between pro- and anti-Morsi protesters or between Morsi supporters and the police responding together with armed locals in civilian clothes.

The gulf between both sides is growing, as is dangerous rhetoric that could incite further violence. On Egyptian TV, the Muslim Brotherhood is referred to as a “cancer” that must be wiped out. On the stage at the pro-Morsi tent city, Islamist leaders fire up crowds by labelling those who support the coup as apostates. Many Egyptians fear an impending civil war, though analysts say this outcome is very unlikely.

Still, violence and political instability since a popular uprising deposed Egypt’s long-time strongman Hosni Mubarak in early 2011 have destroyed the economy; and the poor have been the first to pay the price.

"The economy is already on edge and things will deteriorate even more if a political way out is not found," Rashad Abdo, a leading economist and head of local think tank Egyptian Economic Forum, told IRIN.

Both sides have what one analyst described as “maximalist” demands: the new interim government wants the Muslim Brotherhood to completely accept their roadmap for the future; the Brotherhood refuses to take part in any dialogue until Morsi is reinstated as president.

So what is the way out?

De-escalation: The first step, analysts agree, is to de-escalate the tension. A security solution to the problem (for example, clearing the Muslim Brotherhood sit-in by force) would lead to “catastrophe”, according to former diplomat Ibrahim Youssri, who served under Mubarak.

Human Rights Watch has called on the army to cease using live ammunition to control the crowds (though the Interior Minister denied having done this), and Amnesty International encouraged the authorities to issue “clear instructions to security forces to refrain from the use of disproportionate force”.

According to Oxford Analytica, a global analysis and advisory firm, there is a high probability of Islamist retaliation if the army continues its current course. This could involve supporting a jihadist anti-army rebellion in Sinai and/or acts of terrorism in other parts of Egypt, including Cairo, it said. 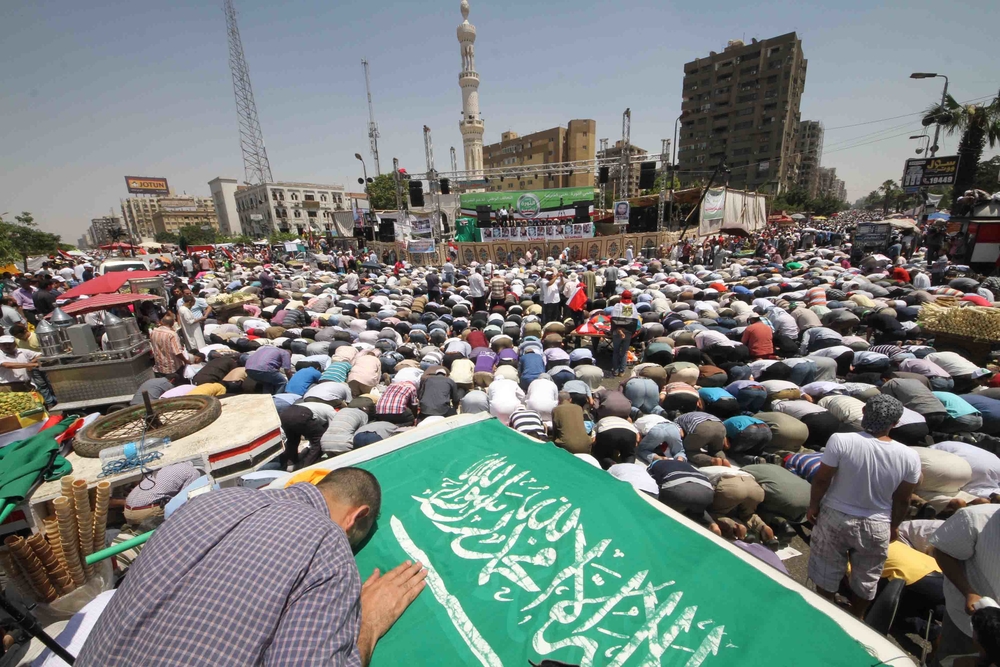 On the Brotherhood side, one form of de-escalation would be a condemnation of all violence, including militant activity in the Sinai.

Confidence-building measures: As it stands now, members of the Muslim Brotherhood see themselves in an “existential crisis”, according to Yasser El-Shimy, an analyst with the International Crisis Group (ICG). “They fear that if they went home, that would be it: there would be nothing to prevent the security forces from authorizing a major crackdown and completely excluding them - not just from politics, but also cracking down on the organization’s social and religious activities. So they need to have some kind of guarantees that they are not going to be persecuted.”

A few steps to help build trust, he and high-level officials from the UN and European Union (EU) have recommended, include: releasing Morsi, who has been detained by the military in an unknown location since his ouster, or at the very least transparently reviewing his case; releasing other jailed Muslim Brotherhood leaders rounded up since 3 July; and launching an impartial and transparent investigation into the killings of Morsi supporters.

In return, the Muslim Brotherhood should call off its protests, or at the very least call on its supporters not to extend rallies beyond their sit-in location at Raba’a al-Adaweya square in Cairo’s Nasr City neighbourhood. Such roaming protests have paralysed traffic, terrorized civilians in the area and at times provoked security forces.

Liberal youth behind the original revolution in 2011 have also called on the army to demonstrate clearly that it does not want to come back to power. (A military council ruled Egypt following Mubarak’s downfall until Morsi was elected)

“Neither the Brotherhood nor the military represent the ideals of the revolution of the Egyptian people,” said Eslam Ahmed, a liberal activist who helped form a new movement called Third Square, opposed to both Muslim Brotherhood and military rule.

Mediation: All parties agree that some form of mediation is necessary. According to Saad Eddin Ibrahim, a leading democracy advocate, even the Brotherhood has privately reached out to him to act as a mediator between the movement and the new government, though the Brotherhood denies this.

One main challenge is the lack of an acceptable arbiter. “On the domestic front, there is no party left to play the role: not the army, not the Azhar [highest Muslim authority in the country], not the church, nothing,” El-Shimy said. “They have all been incredibly politicized and have taken one side or the other.” Even Atef Al Hadidi, a researcher from al-Azhar, suggested international mediation would be preferable. 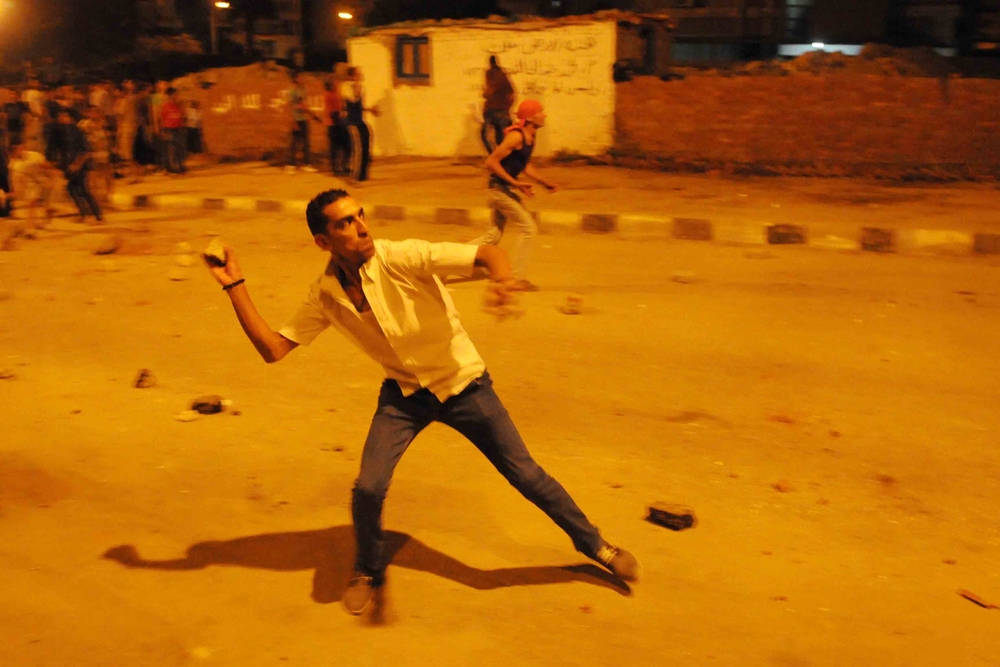 The Arab League has also been ruled out by many analysts, its members divided about developments in Egypt. Several players have pointed to the EU as a foreign force more favourably viewed by both sides than the US (EU foreign policy chief Catherine Ashton is the only foreign diplomat to have met Morsi during his ongoing detention). The ICG’s El-Shimy suggests the UN could also play a role. But both sides must drop all conditions before sitting at the table, Al Hadidi said.

Meanwhile, some worry that by “succumbing to the Brotherhood”, as the former diplomat Ibrahim put it, the government would be emboldening other movements into potential opposition, including harder-line Salafists.

Roadmap to elections: The Brotherhood has demanded that all recent measures taken by the army - the ouster of Morsi, the dissolution of parliament and the suspension of the constitution - be reversed. But it has suggested that after Morsi is re-instated, Egyptians can legally decide whether he stays in power through a popular referendum. El-Shimy calls this “wishful thinking”.

Islamist thinker Mohamed Selim Al Awa has proposed a slightly more conciliatory plan, which involves a reinstated Morsi delegating his powers to an independent prime minister who would pave the way for parliamentary elections within 60 days, followed by presidential elections. This proposal also includes amending articles in a constitution pushed through by an Islamist-dominated parliament, which - while approved in a national referendum last year - remains controversial.

But this plan is opposed by Egypt’s liberal and secular political camps as “one last attempt by the deposed president and his party to go around the will the people expressed on 30 June," according to Ahmed Shaaban, a leftist activist, referring to the day millions of Egyptians took to the streets to demand Morsi's ouster. "They just want to go back to power through a backdoor."

El-Shimy proposes something slightly different: a revival of the constitution as a temporary measure (in order to protect freedoms and rights in the interim) until a more permanent consensus-based constitution can be drafted; a formal resignation by Morsi, in order to end questions around the legitimacy of the new authority; handover of power to a consensus prime minister; the launch of a process to amend the constitution; and finally, elections.

But this approach, too, faces a challenge in the lack of leaders among Egypt’s politicians. In addition, according to some views, a consensus candidate would undo the expression of public anger against Morsi, as exhibited in the 30 June protests: “There cannot be a power-sharing plan because this plan will overlook the facts on the ground,” Ibrahim said.

"The country cannot continue to be governed on the streets, by the streets."

In a best-case scenario, Oxford Analytica says, talks would bring Islamists into the transition process as part of a national unity government.

An important part of the puzzle will be re-establishing the credibility of the democratic process in the eyes of the public, especially the Brotherhood. “Suppose we accept to be part of any election in the future in the light of the transition plan. Will the army accept the results of the election if we win it? I doubt this,” said Taher Abdel Mohsen, a Brotherhood leader and a member of the dissolved upper house of parliament, known as the Shura Council.

National reconciliation: Most of the steps above are pre-requisites for true national reconciliation, experts say. On 24 July, the interim presidency announced a transitional justice plan, with the aim of ushering in an era of truth, presidential adviser Mustafa Hegazi told a press conference. Using national reconciliation in South Africa as a model, the plan includes the formation of a truth and reconciliation commission that will investigate crimes committed during the past few weeks, as well as under the tenures of both Morsi and Mubarak. The commission would also create a legal framework for transitional justice, which would result in amnesty for some people and prosecution for others, Hegazi said.

Since the original 2011 uprising, calls for a broad-based, non-political transitional justice process have not been heeded. “Crimes continue to happen and corruption continues to thrive, simply because we have not launched this plan,” said Nasser Amin, a lawyer and rights activist who has been party to meetings at the presidency about the plan. “Egypt will not move a step forward without this transitional justice… People have to pay for their mistakes or there can never be reconciliation.”

But for former constitutional judge Tahani Al Gibaly, the players are not yet ready: "I do not think it is easy to reconcile while one party [the Muslim Brotherhood] refuses to admit its mistakes.”

In any case, the Muslim Brotherhood has so far boycotted those meetings: "The army must first show respect for the ballot boxes and then we can talk about reconciliation," Abdel Mohsen said. Without their participation, any national reconciliation process is bound to fail, experts said.

Just days before the latest violence, interim vice-president Mohamed ElBaradei wrote on his Twitter feed: “Transitional justice and national reconciliation based on inclusiveness are only option. The sooner we realize this the more lives are saved.”