The latest data – which includes famine conditions in a part of the country for the first time in more than a decade – comes in a new food security report from the government and UN agencies. The report was sent to The New Humanitarian by the World Food Programme but is not yet available online.

Emaciated children and malnourished mothers are streaming every day into poorly equipped local hospitals, where doctors and nurses who spoke to TNH on visits to northern, western, and southwestern parts of Burkina Faso said they are feeling overwhelmed and bracing for things to get worse.

“There are people who have nothing to eat,” said Philomene Sawadogo-Ouedraogo, head of the paediatric ward of the main hospital in the town of Kongoussi in the Centre-North region.

While there should be enough food to go around in the country – production increased in recent months by nearly 10 percent compared with a five-year average, according to the report – attacks by extremists and a patchwork of other armed groups have now uprooted one million people, cleaving farmers from their land and leaving crops rotting in fields and granaries.

Measures taken to halt the spread of COVID-19 – including a ban on public transport, the quarantining of entire cities, and the closure of borders and markets – have compounded the situation, creating “a major socio-economic crisis”, according to the report.

Though restrictions were lifted in April and May, many Burkinabe told TNH their purchasing power is yet to fully recover, while doctors said there has been an increase in severe cases of malnutrition around the country, even in areas unstirred by conflict.

“The situation is extremely alarming. It is pushing people to the limit of vulnerability.”

Aid groups told TNH they are trying to step up their assistance but that a funding shortfall and insecurity in hard-hit areas are compromising their efforts.

Needs are expected to rise further as displaced people miss yet another planting season, and violence roils the breadbasket region of Boucle du Mouhoun, threatening to choke food supplies across the country.

“The situation is extremely alarming,” said David Bulman, WFP’s country representative in Burkina Faso. “It is pushing people to the limit of vulnerability.”

Hunger often spikes in Burkina Faso at this time of the year, known as the lean season: Food stocks are typically low, prices go up, and people rely on crops from the previous harvest to see them through.

But waves of violence in recent months have devastated lives and livelihoods, leaving around 15 percent of the population needing emergency food assistance.

In Burkina Faso’s conflict-affected Sahel region, some 11,000 people are facing “phase 5” food catastrophe – this is the highest level under the Integrated Food Security Phase Classification system drawn up by the UN and aid agencies and indicates famine conditions. Aid officials said it was the first time in more than 10 years, perhaps longer, that part of Burkina Faso was considered to be “phase 5”. Hundreds of thousands more people in other parts of the country are also facing acute food insecurity.

In Kongoussi, where tens of thousands of displaced people are living, construction workers were erecting a new ward at the local hospital last month to cope with the increasing numbers of emaciated children. The noise rattled through a makeshift waiting room where a line of anxious parents all held frail babies.

“Sometimes the kids say they’re hungry, but I don’t have anything to feed them. I just tell them it will be okay and to go to sleep.”

The situation had become so bad in recent weeks that malnourished mothers were showing up with their suitcases hoping doctors would let them live at the feeding centre because they had run out of breastmilk. Doctors told TNH they didn’t have enough money to feed them.

Soaring displacement is at the heart of the problem. Away from their fields, people like Amadou Tamboura – a 58-year-old father of 14 who fled his village after jihadists attacked it in January, killing four of his children – are now entirely reliant on government rations of beans and millets that barely extend beyond a meal a day.

“Sometimes the kids say they’re hungry, but I don’t have anything to feed them,” said Tamboura. “I just tell them it will be okay and to go to sleep.”

Tamboura told TNH he would like to be able to farm crops in Kongoussi, a relatively safe town where his family are now living in flimsy tents, but local authorities told him there’s no land available. 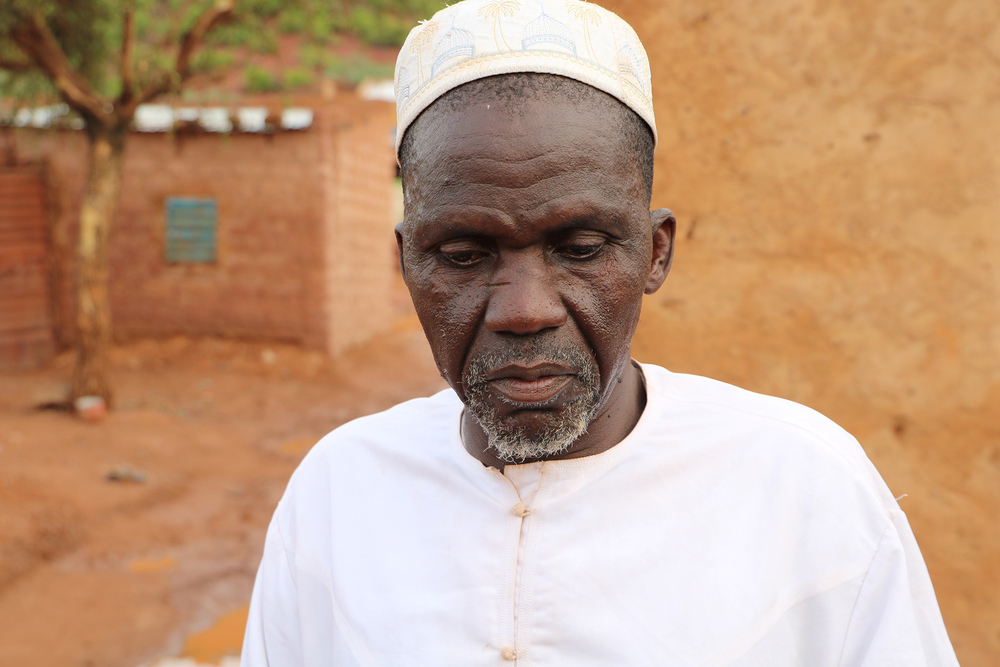 Sam Mednick/TNH
58-year-old Amadou Tamboura’s family fled to Kongoussi town earlier this year and are now reliant on government food rations that barely extend beyond a meal a day.

Those who haven’t fled their homes are also impacted, as violence restricts movement and eats through incomes. In Tougan, a town in Boucle du Mouhoun – where 27,000 are facing a “phase 4” food emergency despite stocked granaries – a 42-year-old fruit seller who asked for her name to be withheld told TNH that the market she used to work at closed down in February after a deadly raid by jihadists.

The mother-of-five tried selling food at another market, but in December jihadists in the area told her it was off limits because they were laying the route with explosives to kill soldiers. The woman now works at a smaller market earning far less money – and eating far less food.

“I just have to withstand it and struggle through,” she said.

Coronavirus restrictions have made everything worse, according to the food security report, with “losses of jobs, income and livelihoods [plunging] a good part of the population into food insecurity”.

The restrictions, combined with the impact of the lean season, have caused food prices to rise, according to Julia Wanjiru, a policy analyst for the Sahel and West Africa Club, an intergovernmental economic group. The price of millets – a staple food here – rose by 15 percent compared to this time last year, for example.

Holding her five-week-old son in Hounde – a largely peaceful town in the southwest – Balkissa Ouedraego said the increasing price of maize since March made it harder for her to eat while she was pregnant.

Doctors and nurses in the town described a spike in malnutrition since March, with some children suffering a complication called edema, which causes swelling so severe the skin can start to fall off.

The price hikes have meant that people are unable to eat balanced diets of fish, meat, and different grains, doctors said.

Petty traders and informal workers have also been badly hit by the restrictions. The 42-year-old fruit seller said she turned to a costly private transport company to deliver produce when public transport shut down – but supplies came less frequently and, in April, didn’t come at all.

To cope with income pressure, many traders told TNH they dipped into savings and are now playing catch up.

Travel restrictions, meanwhile, stopped some of the most malnourished children from getting treatment at hospitals, according to Coumbo Boly, a paediatric doctor at Yalgado Ouedraogo University Hospital in the capital, Ouagadougou.

One of her patients – two-year-old Fatimata Ouedrago – was discharged in December after treatment for a pulmonary and urinary infection and malnutrition-related swelling. She was due to return for a check-up in March but the travel ban delayed things by three months, by which time the swelling had worsened.

“We see more and more cases and situations of patients who should have come back for a check-up and couldn't,” said Boly. “They come back with situations that are worse.” 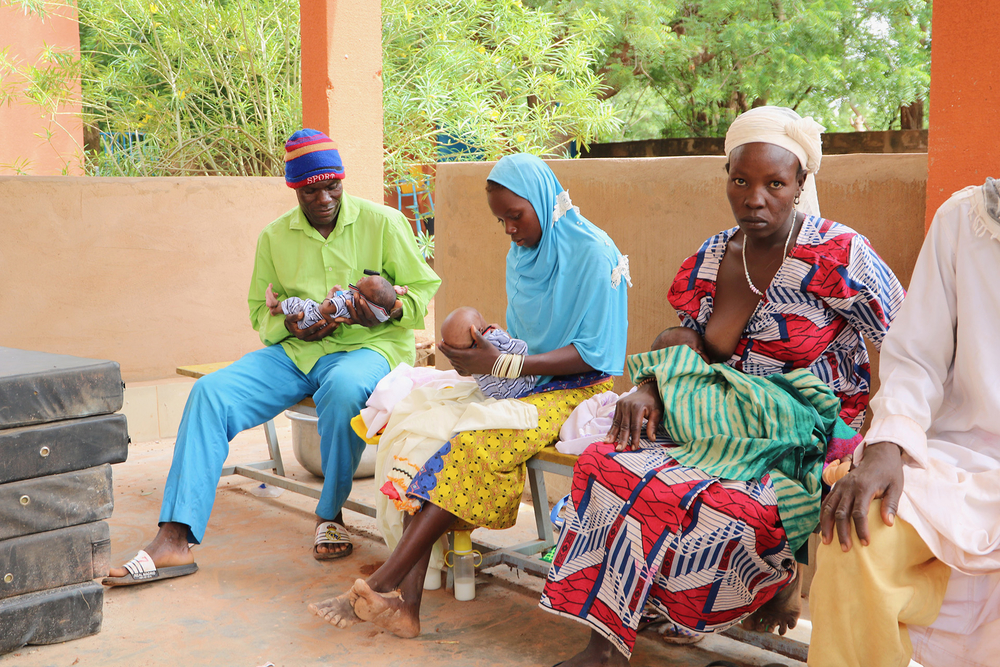 Sam Mednick/TNH
Parents of malnourished children sit in the waiting room of a local hospital in Kongoussi. Monthly malnutrition cases tripled at the hospital during the first half of the year.

The UN has appealed for $424 million to fund relief efforts in the county this year, but a third of that ask is still outstanding. And even with the right resources, increasing attacks on humanitarians are making it harder to reach vulnerable populations.

Aid agencies transporting food for a distribution in Burkina Faso’s Sahel region – where people are hungriest – were ambushed and robbed by armed men on back-to-back days in early August, according to an internal humanitarian security report seen by TNH.

“Humanitarians are failing to reach the majority of people in need in the [northern region of] Sahel due to insecurity, and it's particularly concerning given the growing needs,” said Manenji Mangundu, country director for Burkina Faso and Niger for the Norwegian Refugee Council.

Though rains have been favourable in recent months, most displaced people have been unable to access their farms, creating a “vicious cycle” of food insecurity, according to Wanjiru, of the Sahel and West Africa Club.

In Boucle du Mouhoun – the region that produces the most grains in the country – violence has spiked this year and food security experts warn that if production goes down, it could have severe consequences for the rest of the country.

In Kongoussi, desperation has forced displaced people to go back to the villages and farms they fled, accompanied in some instances by local volunteer fighters – civilians trained by the government to battle jihadists, often with little more than a knife or hunting rifle.

But many went back to Kongoussi shortly after leaving because they heard that armed men were lurking nearby. Relatives of those who returned home to farm and stayed put told TNH they worry about this threat constantly.

“They are farming out of fear,” said 62-year-old Amado Koanda, three of whose sons were sent home to help the displaced family survive the months ahead. “My mind is always thinking about them.”