Read about what we achieved.
ADEN

In Yemen's civil war, the Houthi rebels are on the back foot. As they retreat, they leave death traps in their wake.

Four-year-old Faiz al-Olfi lies sleeping in al-Naqeeb hospital in Yemen’s southern city of Aden, his face speckled with tiny shrapnel wounds. His red, swollen-closed eyelids, and the gash that stretches between them, attest to the damage done by the blast that sent a metal fragment slicing into his right eyeball.

Two days earlier, Faiz was travelling in a car with his family through Khormakser, a residential district of Aden, after visiting his uncle. Close to the police station, one of the vehicle’s wheels detonated a land mine buried in the sand. Faiz’s mother and sister survived the blast that tore into the car. His father died a day later from his wounds. Faiz's family have not been told if he will be permanently blinded by his injuries. The hospital does not have the resources to operate to remove the shrapnel. 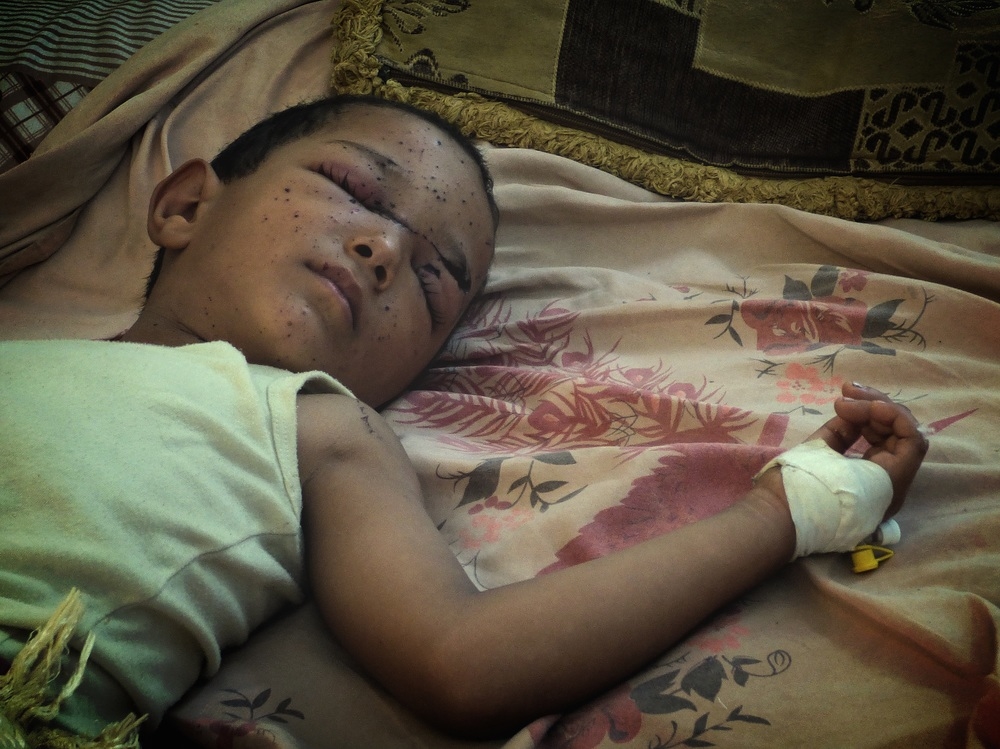 In the past few weeks, the momentum in Yemen's civil war has shifted radically. The northern Houthi rebels, who had gained control of the capital Sana'a and extended their reach all the way to Aden, have suddenly been put on the back foot. They have retreated north from Aden and now look set to lose the central city of Taiz. Forces loyal to exiled President Abdu Rabu Mansour Hadi, as well as southern rebels loosely aligned with him, have benefited from the arrival of troops and supplies from the Saudi Arabian-led coalition of nations supporting Hadi. 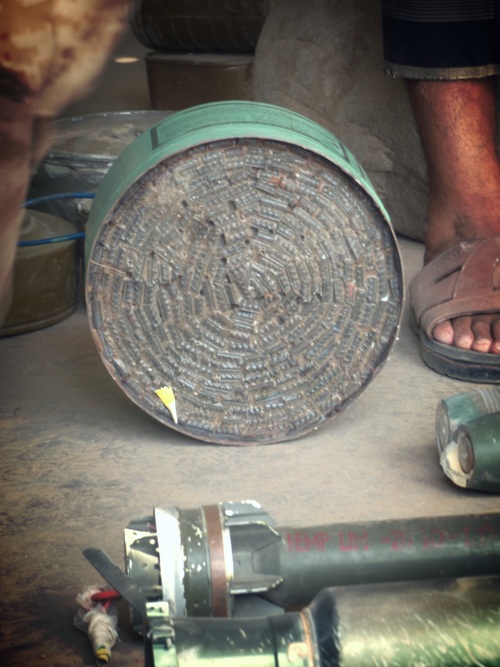 As the Houthi fighters, along with renegade military units loyal to Yemen’s former president Ali Abdullah Saleh, have retreated, they are accused of leaving a deadly trail of mines, improvised explosive devices (IEDs) and booby-traps in their wake.

Staff of the Mine Action Programme Centre in Aden - just one of four storage facilities for unearthed mines in the three provinces of Aden, Abyan and Lahij - collected 1,170 mines between 13 July and 10 August, uncovering as many as 120 in a single day in one western suburb of the city.

Given the number of devices already discovered, those involved in their removal estimate that around 150,000 mines have been laid in the three provinces alone. At the current rate, with depleted, ill-equipped and underfunded demining teams it will take between five and eight years to clear all the devices.

Since health officials started counting in mid-July, 98 people have been killed and 332 injured in Aden, Abyan and Lahij because of mines.

Iskander Abdul Yousef, who has been involved in demining in southern Yemen for more than 25 years, says the current task facing the centre is much more difficult than anything it has tackled before.

“In 1994 the old minefields were mapped by the military so we knew where all the mines were,” said Yousef, referring to Yemen’s last north versus south civil war in the 1990s. “But now they are scattered all over. In residential areas, between houses, on roads. We don’t know where they are.”

The director general of the city’s demining training centre, Col. Salah Abdullah Omar, paints a gloomy picture for the survivors of mine blasts. 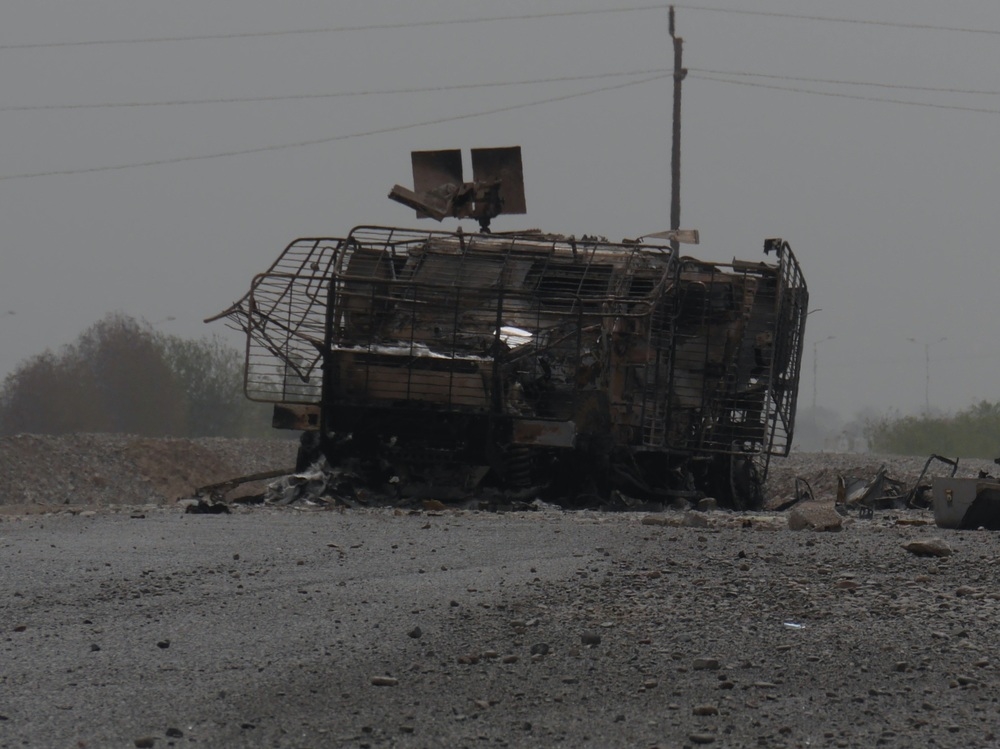 Iona Craig/IRIN
A UAE vehicle destroyed by a land mine in Green City district of Aden, Yemen

“Some are made to handicap not to kill... If you’re injured you suffer forever. It makes it more inhumane,” he said.

Those laying explosive devices have adapted to the arrival of scores of tanks and supposedly mine-resistant vehicles used by troops from the United Arab Emirates in the Saudi-led Operation Golden Arrow.

“We call it the hamburger,” said Mine Action Programme team leader Shiek Zaid Tabet as he flicked through images on his mobile phone of ordnance recently uncovered in Abyan.

Houthi officials did not respond to requests for comment on the allegations.

Between 2000 and 2012 the demining team in Aden lost six men. In the year after the war between al-Qaeda and the Yemeni military in Abyan in 2011 and 2012 seven deminers died. In the past month alone, eight have been killed. 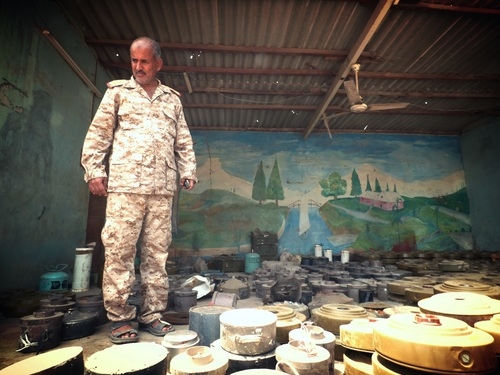 Iona Craig/IRIN
Shiek Zaid Tabet, head of the Mine Action Programme in Aden, stands amid some of the land mines found by his teams since mid-July

The mines being found now are predominantly Soviet-made. Others are homemade devices of the same design as those used by al-Qaeda here in 2012.

Aden residents have been also killed by booby-traps set in their homes and cars. These often take the form of hand grenades strung in such a way that their pins are removed by the opening of a door.

Tabet’s men are struggling to tackle the mammoth task ahead of them. The teams’ vehicles have been looted or destroyed, forcing deminers to borrow cars from local residents or family members. They don’t even have enough batteries for their metal detectors. Funding and supplies usually come from the capital Sana’a - but this is now under Houthi control.

Meanwhile, the numbers killed or, like Faiz, maimed by mines continue to climb and a collapsing health care system is unable to meet their treatment needs.

“This is a huge humanitarian issue. It is bigger than us.” says Tabet. “Many civilians are dying. We are doing our best to stop more deaths, but it is not enough,” he adds as he takes a call from his team in Lawder, northern Abyan. It is not yet 11 a.m. His men inform him they have already discovered more than 100 mines that morning. 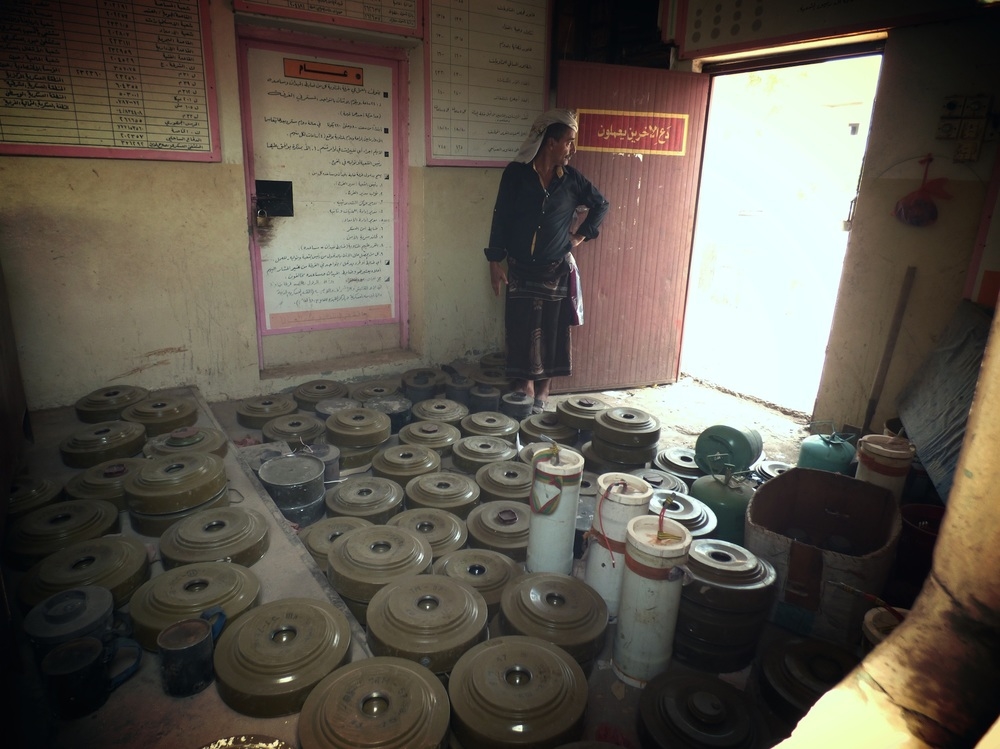 Iona Craig/IRIN
One of the storage rooms in Aden where demining teams have collected an array of more than a thousand Soviet, home made and U.S. mines. The stock is set to be destroyed by controlled explosion
* This story originally included a photo labelled "Small homemade mines". In fact, the image was of detonators for bombs. The photo has been removed.
Share this article
Join the discussion