Food shortages and rising prices could be a decisive issue in Kenya’s cliff-hanger election in two weeks’ time, with the government accused by the opposition of mishandling a savage drought that has left millions hungry, and the two sides neck and neck in the polls.

The drought has been one of the worst on record. As many as 2.6 million people are “acutely food insecure”, and aid agencies fear almost one million more could be at risk by August, with the remote regions of Marsabit and Turkana possibly sliding into "emergency levels of hunger... one step away from famine."

The long rains, which usually start in April and end in June, were far below normal, with some counties recording 75 percent less rainfall than on average. Kenya’s food security is almost entirely reliant on rain-fed agriculture.

This has had a disastrous impact on the harvest. A UN Food and Agriculture Organization report in April said production of maize, Kenya’s staple crop, was down by up to 70 percent on the average of the last five years.

As a result, food prices have rocketed. Unga, or maize flour, was up by roughly 50 percent, milk 12 percent, and sugar 21 percent, affecting household consumption across the country.

But some argue the problem is not the drought alone: The crisis has been exacerbated by poor decision-making by the government of President Uhuru Kenyatta.

“Kenya doesn't have a famine or a food crisis but a governance challenge with multiple symptoms,” John Githongo, a well-known Kenyan anti-graft activist, told IRIN.

​“The food crisis, cost of living, rampant theft and pillage, and insecurity do pose a threat to Kenyatta's position at the election,” he said. “There is a generalised malaise and disgust with the lies Jubilee [the ruling party] has told.”

Detractors claim this was a crisis Kenya, as a middle-income country, should have been prepared to handle.

In January, Deputy President William Ruto predicted that maize stocks would last until June. But early warning systems were forecasting depressed rainfall, and the government was forced into an embarrassing U-turn a month later on its policy of not importing grain to meet the growing crisis.

“In terms of the problem and preparation for the upcoming crisis, there wasn't any preparation,” said Kwame Owino, head of the the Institute of Economic Affairs, a Kenyan think tank.

“That tells you, on that basis alone, it's not too unfair to say that this is incompetence.”

The government responded only in May to consumer anger, introducing price controls and subsidies on maize flour, and lifting tariffs on maize imports. Voters will get to decide at the polls on 8 August whether it was too little too late.

The opposition National Super Alliance, or NASA, led by Raila Odinga, has not been slow to politicise the issue, blaming the government for fumbling the crisis. The hashtag #ungarevolution is trending on Twitter – capitalising on the government’s discomfort.

The government is trying to limit the damage. Agriculture cabinet secretary Willy Bett – who the opposition has called on to resign – has promised the maize shortage will be contained within the coming month.

But some small shop owners like Edmund Wabwile are struggling. "Because of shortages, we’re forced to hike prices so that we as shop owners can get something,” he told IRIN. “Instead of selling at 90 shillings, we're selling at 95 or 100.”

“Being in business was something you enjoyed, but they reduced prices; they reduced everything and they don't consider us retailers!” said Wabwile.

In total, until the end of August, the government is expecting to spend up to $58 million on subsidising maize prices and waiving tariffs on sugar and milk. 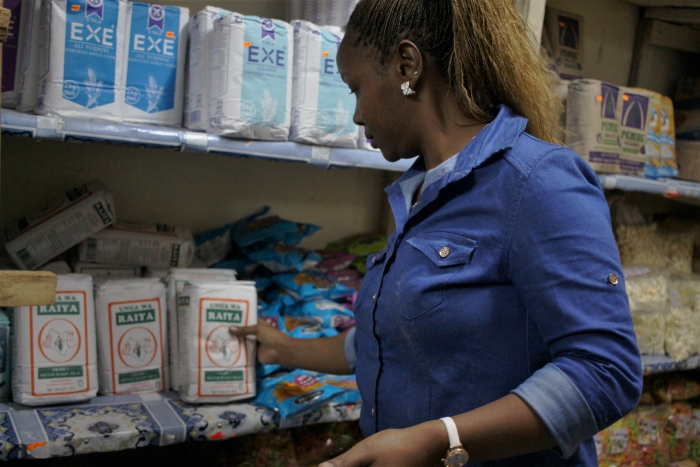 But some argue that Kenya’s food security problems are much more deep-seated, and the government has failed to make the country more drought resilient in its four years in power.

Government mega-projects, such as its abandoned $200 million Galana-Kulalu irrigation scheme in the coastal county of Kilifi, have not led to the bumper yields promised.

“A lot of public money and resources was spent on it to try and do that. It was intended to be a major plank of our food security policy, but it's failed,” Owino said.

Kenya consumes around 288,000 tonnes of maize per month, according to the Cereal Millers Association. Around 135,000 tonnes of this is milled, packaged, and sold by millers, yet millers are buying maize at a 50 percent mark-up due to dwindling reserves and high-priced imports.

Kenya is now relying on maize from both neighbouring countries like Ethiopia and Tanzania as well as Mexico. But the links between politicians and the milling industry means this tends to favour large-scale millers, argues NASA’s Kambona.

“The distribution of the imported maize is not transparent and favours only some large millers, leaving out small- and medium-size millers who are the ones who serve rural populations,” he said.

The government’s agricultural policy in general tends to work to the benefit of large-scale producers, noted Owino.

"Government gives price support [for commercial farmers], which is basically much higher than regional prices and also international prices. In that way it protects them from competition,” he said.

"Some politicians are actually maize farmers themselves and have big farms, especially those who come from the Rift Valley, like Ruto and all his colleagues.”

Scandals are nothing new. In 2009, ministers were sacked after thousands of tonnes of maize was stolen from the country’s reserves. Then-agriculture minister Ruto was implicated, but avoided any legal action.

Store owner Wabwile, like many Kenyans, feels that politicians and the well-connected are profiting from the current crisis.

“It's easy for this situation to come to an end, and that's by tackling corruption,” he told IRIN. “That is the only solution. When you deal with corruption, that is when things will start to change.”

With aid agencies fearing the drought could yet get worse, Owino points out that subsidies can’t last forever.

"The government hasn't addressed how you fundamentally deal with this recurrent food crisis.”

With just two weeks ahead until polling day, Jubilee faces an uphill battle to convince Kenyan voters that more of the same in terms of policies will end the shortages.