The aim of a high-level conference in Geneva on Wednesday was to convince the international community to rapidly increase resettlement places for Syrian refugees and open up other under-used legal pathways that would remove the need for dangerous boat crossings and long, difficult treks.

But the response from the representatives of 92 countries who attended the meeting was restrained and fell far short of a target set by the UN’s refugee agency.

UNHCR, which hosted the conference, was not asking for miracles. It had called for resettling or securing other forms of admission for just 10 percent of Syria’s 4.8 million refugees over the next three years.

In the lead-up to today’s meeting, UNHCR and NGOs like Oxfam have been pushing for potential host countries to reach the 10 percent target by not only pledging resettlement places, but also offering other legal channels for Syrian refugees such as humanitarian and family reunion visas, scholarships, private sponsorship programmes and labour mobility schemes.

None of these channels are new. As the Migration Policy Institute Europe pointed out in a recent paper: “in theory refugees are already eligible to move through many of these channels, [but] in reality pathways are often blocked by practical, technical, and political obstacles.”

Razan Ibraheem, a Syrian journalist who was able to reach safety in Ireland with a student visa and then brought her brother to join her through a private sponsorship scheme, told the meeting about other Syrians she had met in Greece and Turkey who could not access these legal options. One woman had taken a boat to Greece with her sister’s four children in addition to five of her own because her sister’s application for family reunion had gone nowhere.

“Had her application been processed, those children would have been saved the horrors of crossing the Mediterranean,” said Ibraheem, who urged countries “to overcome past mistakes” and quickly expand resettlement programmes and fast-track family reunion.

But the obvious conclusion to draw from the conference is that countries are unwilling to significantly expand on earlier resettlement commitments or open up other pathways.

Five years into the Syrian crisis, only 160,000 resettlement places have been offered by 30 countries, while the total number of refugees to have actually arrived in those countries is a fraction of that figure – just 67,108, according to a report released by Oxfam on Tuesday.

State representatives took to the floor of the Palais des Nations one after another on Wednesday to speak about the need for greater international cooperation and burden-sharing to address the Syrian refugee crisis, but few announced any new plans to take in more than a few hundred refugees. 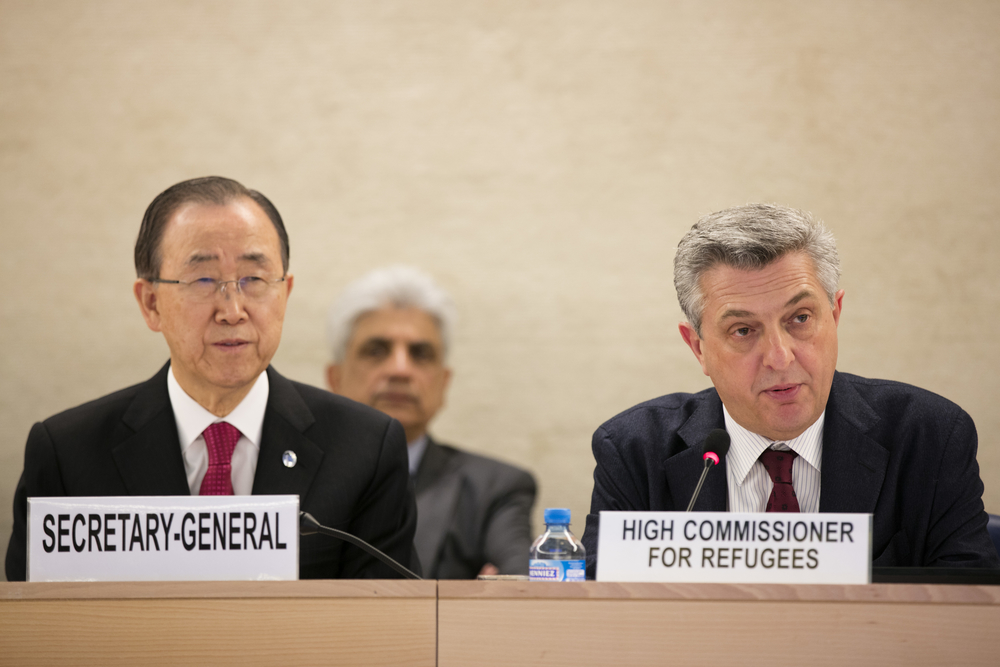 Most focused instead on the money their countries had spent supporting refugees to remain in overwhelmed neighbouring countries like Turkey, Lebanon and Jordan.

Jordan’s ambassador to the UN, Dina Kawar, pointed out that Jordan is hosting 1.3 million Syrian refugees who now make up 25 percent of the population, putting severe strains on the country’s infrastructure, public services and economy.

“Refugee challenges can’t be addressed by any one state; nor can immediate neighbours be expected to continue to bear the brunt of the refugee problem,” she said, adding that genuine solidarity required countries beyond the region “to also keep their borders open”.

Canada, Australia and the United States – traditionally the three largest resettlement countries – all highlighted current programmes to assist Syrian refugees, but made no pledges to take in more.

Canada is one of only three countries identified by Oxfam as having resettled more than its “fair share” of Syrian refugees based on the size of its economy. Under the leadership of Prime Minister Justin Trudeau, the country has absorbed 26,000 Syrians since November 2015, nearly 9,000 of them through private sponsorship.

Speaking at the conference, John McCallum, Canada’s minister of immigration, refugees and citizenship emphasised the importance of leadership from the top as well as “frequent and honest communication with the Canadian people”.

McCallum said that Canada’s “national project to welcome refugees” has been so successful that his biggest challenge now is to find enough Syrian refugees willing to come to Canada.

Germany is another country to have done more than its “fair share”. It admitted 41,000 Syrians through a humanitarian admission programme, before 430,000 Syrian asylum seekers made their way to the country in 2015, most having taken boats from Turkey to Greece and then followed a well-trodden route through the western Balkans.

Politics gets in the way

Germany was instrumental in brokering the recent agreement with Turkey to take back all new arrivals to Greece in return for more aid for Syrian refugees living in Turkey and increased resettlement of refugees from Turkey to EU member states. The deal has been widely condemned by rights groups and aid agencies like Oxfam, which in its report on Tuesday criticised “attempts to use resettlement as a bargaining chip in political deals”.

Speaking at Wednesday’s meeting, state secretary of Germany’s foreign office, Markus Ederer, said: “Irregular migration needs to be stopped by extending legal pathways to admission. This is why Germany has pushed hard for the EU-Turkey agreement.”

The EU’s commissioner for home affairs, Dimitris Avramopoulos, insisted that Europe stood ready to take in its fair share of refugees and pointed out that an EU-wide resettlement scheme was set up in 2015 to take in 22,000 Syrian refugees. To date though, just over 4,500 refugees have been resettled to 11 member states.

With 18,000 places remaining to be pledged, Avramopoulos admitted: “we need to step up delivery and foster political will.”

In a joint statement, Oxfam, Save the Children and the Norwegian Refugee Council described the outcome of today’s conference as “deeply disappointing”, noting that governments had shown “a shocking lack of political and moral leadership”.

Oxfam is calling for 10 percent of Syrian refugees registered in neighbouring countries, some 480,000 people, to be resettled by the end of 2016. It worked out what it called a "fair share" based on the size of rich countries' economies. IRIN used the Oxfam data to produce the graph below showing what percentage of its “fair share” each country has actually pledged to resettle: