South Sudan's latest peace deal is unravelling as fighting picks up and a new declaration by President Salva Kiir threatens the most delicately struck parts of the agreement.

Kiir, an ethnic Dinka, and rebel leader Riek Machar, a Nuer, signed a peace deal last month meant to end 21 months of fighting when a power struggle between the two degenerated into violence marked by army massacres of Nuer in the capital, Juba.

Tens of thousands have been killed in the fighting, which has displaced over two million people, according to UN figures.

But the latest deal, backed by the international community, including the UN and the African Union, may be going the way of at least seven previous agreements which fell apart within days.

Over the last two weeks, fighting has broken out in at least three of South Sudan's states.

In the northern Unity State, rebel forces, whom analysts say have been recently resupplied with ammunition, stormed the headquarters of Leer and Koch counties last Friday, briefly taking both counties’ main towns. Rebel fighters who have since come to Nyal, a rebel stronghold in the southern tip of Unity state, told IRIN they saw between 30 and 50 dead soldiers from both sides in Leer town following the fighting.

The fighting forced aid groups Médecins Sans Frontières and the International Committee of the Red Cross to evacuate staff from Leer for at least the third time during this war. "Dozens of well-organized armed men" entered the medical charity's compound where aid workers and patients were sheltering on 2 October, the group said, stealing vehicles, medical equipment, and other supplies after threatening the humanitarian staff. MSF said soldiers also entered the compound the next day.

The rebel fighters in Nyal denied responsibility, saying they had tried to enter in order to look for government officials they suspected of sheltering inside but that they were denied access by the aid workers. The rebels said the government pushed them out of Leer town by the evening.

In response to the rebels' short-lived gains, the government army, reinforced by troops from state capital Bentiu, has swept through Leer county, sending 150 more displaced people to Nyal so far, adding to the tens of thousands already there, according to the local relief commissioner.

They come looking for rebels but in the process they are killing civilians.

Government officials in Leer were unavailable for comment on the fighting. SPLA spokesperson Col. Philip Aguer did not respond to repeated emailed questions.

One of the newly displaced in Nyal, William Chuol, who previously owned a video hall in Leer town, said government forces burned Thonyoor and shot at civilians. He said he hid in papyrus swamps during the violence for four hours before returning to the town after the soldiers left, where he found eleven dead bodies, including a man and his three daughters and seven members of another family.

"They come looking for rebels but in the process they are killing civilians," Chuol told IRIN.

The UN Mission in South Sudan (UNMISS), which is mandated to protect civilians, has been absent from southern Unity during this latest fighting. During previous clashes in the same area this year UNMISS patrols were turned back by government troops.

There were reports of fighting in the increasingly embattled Western Equatoria State, which has seen rising tension and violence between local armed groups and government forces. UNMISS also reported shelling in Malakal on Tuesday in Upper Nile State coming from the rebel-held west bank of the river.

I'm not trusting this peace. I'm hearing that the government forces are still chasing civilians in Leer so how is there peace?

Many of the people here are like Elizabeth Nyawich, a mother who arrived two months ago to escape a blistering government offensive which began in May and displaced over 100,000 people. Human rights groups have accused government forces of targeting civilians, raping and abducting hundreds of women and girls, and burning scores of villages.

Nyawich said she tried to survive in the swamps where it was safer, but fled to Nyal once two other children sheltering on their small marsh island died of hunger. She said her own children, ribs showing with distended bellies, were still recovering.

"Look at them, are they healthy?" she asked, adding that she would not return home despite last month's peace deal.

Elizabeth Nyawich with her children in Nyal, Unity State, South Sudan, to where thousands of civili 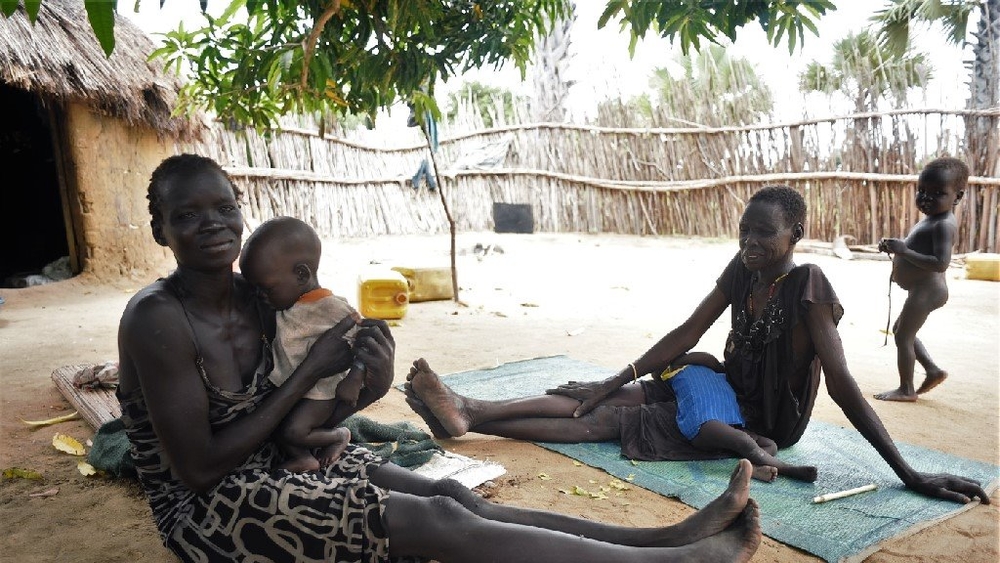 "I'm not trusting this peace. I'm hearing that the government forces are still chasing civilians in Leer so how is there peace?"

As the military situation deteriorates, the political implementation of the peace deal is also showing signs of weakness. Machar did not sign on to a security arrangement last month, and Ugandan forces who have been supporting Kiir show no signs of leaving by Saturday, as stipulated in the latest peace deal.

In a further threat to the deal, Kiir has unilaterally announced the division of the country’s 10 states into 28, upsetting the accord’s delicately struck power sharing provisions. These gave Machar's side the governorships of oil-producing Unity and Upper Nile states. But Kiir's new edict, which carves the country largely along ethnic lines, would split those two states into seven and leaves the Nuer cut off from oil producing regions.

Kiir said the move is meant to "devolve power and resource closer to the rural people," but it has been roundly criticised. Three top donors, the US, UK, and Norway, said it "directly contradicts the Government of South Sudan’s commitment to implement the peace agreement."

A group of fifteen South Sudanese civil society organizations urged Kiir to suspend the order, saying the establishment of the new states is unconstitutional and risks further splitting the country by tribe.