The Facebook request was simple: “Man needs a home.” The actual demand was perhaps less so. Late in August, Israeli activists began asking fellow citizens to take strangers – asylum seekers or refugees just freed from detention – into their homes.

Dan Levi, a university student in Jerusalem who turns 27 in a few days time, was one of those to respond to the call. When he heard that hundreds of men, mainly from Sudan and Eritrea, were in urgent need of somewhere – anywhere – to sleep, he offered up what he had in his flatshare: a couch, a key, and a neatly folded set of linens.

"I haven't been in their situation myself but I feel a lot of empathy [for the refugees]... I felt I had to do something," Levi told IRIN.

After years of legal wrangling, Israel’s high court decided last month that 20 months – the maximum amount of time the state had been holding male refugees and asylum seekers in a desert lockup – was too long.

So, on the last few days before a court deadline to let them go, nearly 1,200 were released from the Holot detention centre. But there was a catch. They were banned from living or working in Tel Aviv or Eilat, the cities where the majority of Israel's approximately 45,000 refugees live. Unable to return to family, friends or community, many were left stranded.

Moran Mekamel, the head of a university group called Ben Gurion [University] Students for Refugees and Asylum Seekers, posted the "Man needs a home" call on Facebook, asking Israelis outside the forbidden cities to play host.

The 30-year-old volunteer was pleasantly surprised at the response. After an hour or so, 30 people had offered spots to some 70 people. “In a few hours, we had a long list of people from very different places all over Israel [offering to help],” she said. “There was an observant Jewish community in Jerusalem, an eco-village [elsewhere].” Within days, some hotels even were offering up free lodging.

The refugee community itself was quick to act and took in most of those left homeless, but ordinary Israelis have filled in the gaps. For example, on that first night last week, three men stayed with Mekamel in Be’er Sheva, the southern city where she lives.

The overwhelming majority of Israel's refugees and asylum seekers are from Sudan and Eritrea. Fleeing political persecution and war, most came to the country overland via Egypt. 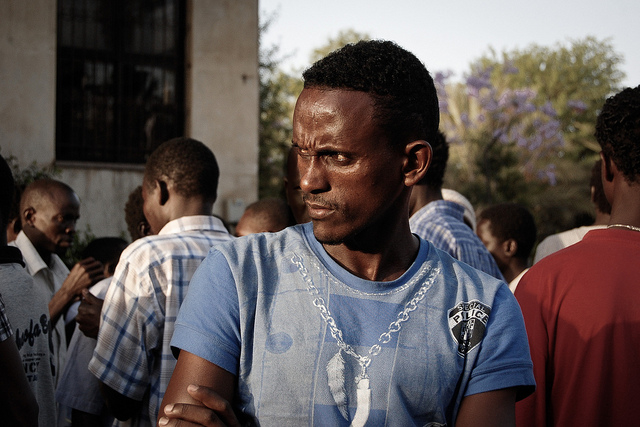 Many of them end up in Holot, a detention facility located in the southern Negev desert that is the physical embodiment of Israel's "Anti-Infiltration Law." Asylum seekers may leave during the day – although there isn't much more than sand to visit – but they are forbidden from working. They receive a small weekly stipend. Although long-term inmates have been freed, others have been summoned to Holot. The legal battle over the law is ongoing.

Refugees and asylum seekers can leave the country under a "voluntary deportation" scheme, but there are serious concerns for the safety of those who have done so. This spring, three men who left by choice were reportedly killed in Libya by so-called Islamic State.

The government has also been accused of downplaying the threat posed to Eritreans if they return home. Israel’s Interior Minister Silvan Shalom has said that Eritrea only drafts citizens into the military for 18 months, but according to the UN and various human rights groups, service can include forced labour and last decades, causing many to flee the repressive one-party state.

In April, Israel began issuing deportation orders that would send people to third countries, such as Rwanda and Uganda, where many earlier deportees have complained of poor conditions and few opportunities. If they refuse, migrants can be sent to a more restrictive prison.

Hundreds of African refugees are being released from Holot today. Most have no place to sleep tonight. pic.twitter.com/mkq0P4maHv

Many African migrants in Israel, therefore, live in fear. All three refugees who IRIN contacted declined to speak publicly.

Mekamel said there was a widespread “lack of understanding about the issue,” in Israel, with politicians referring to refugees as “infiltrators” and claiming they are economic migrants.

As an example of this disconnect, many Israelis offered to take in women and children, not realising that it was only male refugees who had actually been detained.

Levi didn’t mind taking in a male stranger. He doesn't consider himself an activist, but for some time he has been concerned about the issue of refugees and asylum seekers in Israel. So when the call came, he picked up Abdallah, who is from the conflict-ridden Sudanese province of Darfur, from Jerusalem’s bus station.

Abdallah, who worked as a cook in Tel Aviv before his 17 months in detention, is rarely home as he’s normally out looking for work. But Levi’s happy to have him to stay. He thinks we’ve lost a sense of openness and kindness that should be natural.

“It’s a really easy thing to do, and it isn’t so admirable,” he insisted. “It’s only letting a man sleep on my couch.”