This article is part of our in-depth coverage. Read more like this...
MINAWAO

It’s still early in the morning in Cameroon’s Far North Region, but hundreds of Nigerian refugees are already hurrying along the Gada Mboulo bridge, a few precious belongings balanced on their head or grasped in their arms.

Fleeing increasingly frequent and deadly Boko Haram attacks, they go through the usual formalities with the Cameroonian military and then walk along a long, dusty dirt road before branching off to find a temporary home.

Many continue on to the Minawao refugee camp, some 40 kilometres west of the regional capital Maroua. The others find refuge with nearby host communities or set up temporary camp in the bush.

Ibrahim Okpyeh explains why he made such a rapid departure from his Nigerian hometown of Gombe.

“That country was hell,” he tells IRIN, pointing back to Nigeria on the other side of the bridge. “Never have I seen so many atrocities. These people [Boko Haram militants] killed everyone in our village. They burned my car, our homes and looted cattle.”

Okpyeh says he and many others walking alongside him had no choice but to leave.

Inna Djamilla had to walk for more than two weeks before reaching the Cameroon border.

“They killed my husband and my eldest son,” she tells IRIN. “What good still remains in this country (Nigeria) that has gone to shit? We have been forced to abandon everything and flee. Several days were spent hiding in the bush. It was horrible.”

In recent weeks, the reach of Boko Haram has extended beyond northeastern Nigerian and the Cameroonian border regions further into Cameroon itself, with a spate of suicide bombings in crowded, public places in Maroua adding to existing fears of raids on frontier villages.

Dozens have been killed and hundreds more injured as five suicide bombings rocked the Far Northern Region in the space of just a few weeks. The Cameroonian government responded by tightening security, banning burkas and other full-face veils as well as introducing curfews and checkpoint searches of vehicles and baggage.

“The sect (Boko Haram) has opted for an asymmetrical war,” Mathias Owona Nguini, political scientist and lecturer at the University of Yaoundé II Soa, told IRIN, adding that the failure of Cameroon and Nigeria to cooperate in the past had helped the Islamist extremists to spread.

A police officer checks the papers of a motorist in Cameroon's Far North region, following an increase in check points, which are an attempt to thwart potential Boko Haram attacks. 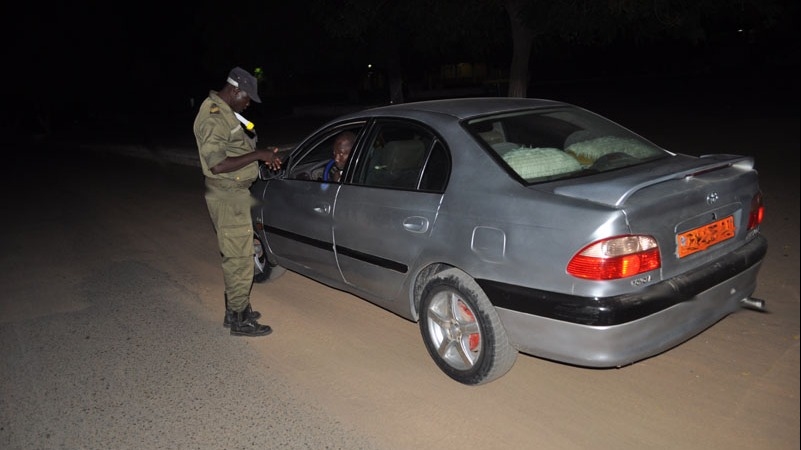 Newly-elected Nigerian President Muhammadu Buhari has made a recent effort to forge closer relations with Cameroon as well as neighbouring Chad, which is also suffering increased insecurity and attacks from Boko Haram. Buhari has made state visits to both countries since being sworn into office in late May. Nigeria has also reportedly pledged $30 million towards the regional task force that is taking on the militants.

“We cannot fight against Boko Haram without [better] coordination among states,” Nguini said, urging Cameroon and Nigeria to overcome territorial disputes around Lake Chad and unite against the militants.

Leon Koungou, another political scientist who is a security specialist, drew a link between the emergence of so-called Islamic State and Boko Haram’s increasingly macabre tactics, using children as young as 10 years old as human bombs to explode in open markets packed full of civilians.

“The scenario is quite similar as that seen in Iraq,” he said. “The movement has clearly pledged allegiance to the (so-called) Islamic State, and is part of the same approach: one that is to reach not only the morale of states who are mobilising against their actions but also of the public, and to build a territory with substantial resources.”

The increased insecurity in northeastern Nigeria and the border region has led to a surge of refugees in recent weeks, most of them trying to flee further into Cameroon and away from the Boko Haram threat.

Between 150 and 300 Nigerian refugees are now being registered each day at the Minawao camp, according to the UN’s refugee agency, UNHCR. The number of Cameroonians fleeing their homes has also increased, although there are no recent, official numbers for internally displaced people.

Mahamat Baiwon, a UNHCR protection officer in Maroua, explained how the refugee agency and Cameroonian government officials were intercepting the incoming refugees soon after they crossed the border.

“We want to know where they want to go: either to the Minawao camp or back to another secure area of Nigeria,” he told IRIN.

Baiwon said most choose the camp, where they hope to benefit from the free food aid distributions and other services, but added that Minawao had now become “saturated with refugees.”

Created in 2013, and expected to host a maximum of 20,000 refugees, the camp’s population now stands at more than 44,000. In the last six months alone, the number of residents has increased by more than 14,000. Another 30,000 Nigerians are believed to have taken refuge in Cameroon outside the camp, according to local authorities.

The Cameroonian government, along with UNHCR and the World Food Programme (WFP), say they now need to build a second camp to accommodate the increasing number of refugees, but that just 30 percent of the funding appeal has been met.

With fewer than 30 borehole hand-pumps and only 280 latrines in Minawao – many of which are no longer functional – camp officials say the risk of disease is high.

Cholera is of particular concern, as more than 100 people died during an outbreak in April. Now, the camp is more crowded and dirty than ever.

“With the changing demographics, the non-observance of hygiene is deplorable,” Zra Mokol, head of a health clinic near the camp, told IRIN. “Given the current situation, if the (cholera) epidemic were to come again, it would be a disaster.”