Mohammed Ataya sweats as he takes a break by the side of the road in Lebanon’s baking Beka’a Valley. The 63-year-old chats and smiles for a while, then makes his excuses and returns to pick up trash from the gutter.

Hundreds of thousands of Syrians have fled to the region, living in makeshift settlements and often dumping their rubbish – with much of it ending up in ditches. This in turn has dirtied the water supply for both the refugees and Lebanese residents.

“If the water is not clean then the farmers have to pump more water from the well, so it costs them a lot more,” explained Mohammed Mazoub, a representative of the local municipality.

As such, Ataya and his seven Syrian colleagues pick trash from thousands of miles of gutters. They work for the municipality, but their wages are mostly paid by the NGO Mercy Corps, who select only the most needy – Ataya himself has 10 family members to feed and has been out of work for most of the time since he fled Syria two years ago.

But Syrians make up only half the workforce – the other half are Lebanese. Mazoub said that until a few years ago it would have been almost impossible to find Lebanese to do such work for just $15 a day. Not any more.

The extent of the economic impact has been the topic of much debate, but the most negative assessment by the World Bank said up to 170,000 Lebanese could be pushed into poverty by the Syrian crisis. While restrictions have recently been increased, many Syrians still work in Lebanon – often at lower prices than Lebanese employees.

George Antoun, Lebanon Country Director at Mercy Corps, told IRIN there are growing tensions between Lebanese residents and refugees. Syrians complain of hostile treatment from Lebanese people, while at least one camp has been burnt down. It is therefore essential, according to Antoun, that all aid programs are designed to help both communities as fairly as possible.

“Most of the time refugees choose poor communities to live in because it is cheaper for rent. These communities were already overstretched in terms of public services – whether you are talking about schools, health clinics, roads, water. Then you have this extra pressure on the system – this is why the tension starts rising.”

Syrian refugees in the Bekaa Valley, Lebanon. They have dumped their rubbish in local areas, leading to issues around clean water. 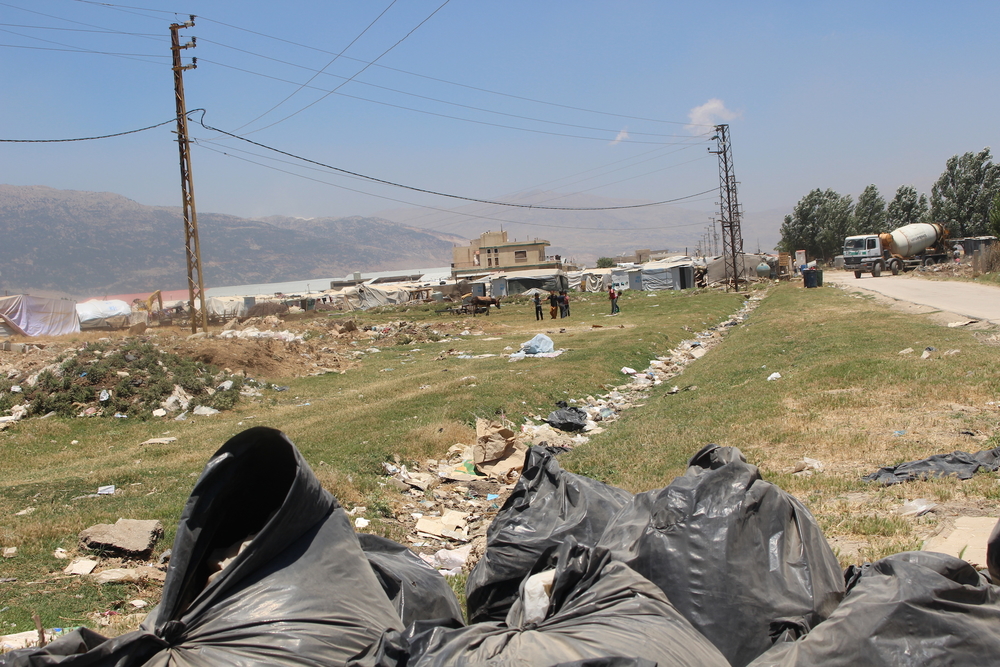 “Some of the Lebanese communities are saying, ‘We are living here. The Syrians came. They are receiving some assistance from the international community, but we are not.’”

The International Rescue Committee (IRC) is another NGO working on programs that help both Syrians and Lebanese.

Earlier this year, it piloted ServiceInfo. This innovative project is similar to services such as TripAdvisor that allow users to search for hotels and restaurants and then rate those services, but it is designed to help refugees find their nearest doctors, supermarket and NGOs. IRC president David Miliband called it, “Yelp for refugees.”

While Syrians are the primary target, IRC Lebanon’s protection coordinator Jocelyn Knight explained it could prove just as useful for the local population.

In Lebanon, directions are often given not as known numbers on known street names but only by reference to local monuments, so the system’s use of GPS mapping could help Lebanon develop a more reliable information network.

“The whole idea is it makes it more efficient for service users, whether they are from the refugee or host community, to find the services that they need,” Knight said.

“In a country like Lebanon that is really important. Just getting information about where to go to access basic services can be really difficult.”

Programs like these are part of a growing understanding of the need to better coordinate long-term development aid and short-term humanitarian aid. A hot topic in development circles, the two systems have historically been largely separate.

But with protracted refugee crises such as the Syrian one, there is a growing recognition that short-term solutions are unsustainable. Humanitarian agencies have been forced to drastically cut back on their food aid to Syrians, so finding work for them is ever more important.

At a tomato farm a few miles further into the Beka’a, Lebanese farmer Moshed has 10 Syrian employees. Last year, he said, there was so little rain he had almost no crops.

This year, with the help of Mercy Corps, he has planted a new breed of tomato that sells for twice the price and is more suited to his soil. With the profits, he has been able to expand and increase his staff again.

“The Syrians are not leaving any time soon, and so we need to start thinking about infrastructure and service provision,” Antoun said. “I like to give the example of water. We are still trucking water at huge expense to many refugees, rather than fixing water networks in the community.”

But faced with desperate funding shortages, innovation can be a challenge. Antoun said that donors were still hesitant to back longer-term solutions to short-term crises.

“For many donors these are development projects, and they want to focus on life-saving programs – which means food hand outs. That is necessary but it is not sustainable.”