As Iraq’s 1.8 million internally-displaced persons (IDPs) realize they may not return home for many months, growing numbers are looking for voluntary or paid work to help their fellow homeless.

As evening falls, a queue is forming outside an orange tent in the grounds of a Catholic Church in Erbil, the capital of Iraq’s semi-autonomous Kurdistan region. Although the sun has gone down, the heat is still intense, and tired-looking parents - many from among the 3,000 people who are sleeping in tents next to the church - hold pale, sweaty infants in their arms, waiting for the volunteer-run medical clinic to open.

Standing on one side is 34-year-old Sister Diana. Petite with brown eyes, she wears a black habit over smoothed back hair and white flowing robes and talks quickly, with darting eyes and gesticulating hands.

“We are seeing chronic diseases here because the temperature is above 50 degrees. This brings problems like diarrhoea and dehydration because they don’t have access to clean water,” she explained as she tried to organize the growing lines of men and women awaiting everything from check-ups and medication to hospital referrals.

Sister Diana herself knows the pain of displacement. She fled the Immaculate Conception convent of Dominican Sisters in Qaragosh, a Syriac Christian town in Nineveh Province, shortly before the area was overrun by militants from the Jihadists calling themselves the Islamic State (IS) in early August.

Now she works for free at the Mart Shmony Syriac Catholic Church in Ainkawa (in Erbil), one of a growing number of IDPs giving up their time.

Médecins Sans Frontières (MSF) says it has actively sought out IDPs in order to boost the organization’s operational capacity and now has 26 displaced Iraqis on its staff working on IDP projects.

IDP staff can have positive impacts on the delivery of aid, explained Will Harper, a project coordinator from MSF France in Erbil, who said it was also an important way for people to earn money and support their families.

“If the doctor or nurse they are dealing with shares a language and common understanding of the medical care they had before, this gives them some kind of continuity of care, and also allows the focus to be on the treatment,” he said.

“It is the job of doctors and nurses to care for people. Allowing them to get back to work has a huge value for them and for MSF,” Harper added, though he cautioned that IDP medical staff are also vulnerable and may need psychological and other support.

Although the World Health Organization (WHO) does not work directly with volunteers, it has made an appeal among the displaced populations for qualified medical staff to come forward to help plug gaps at overburdened health facilities.

"If the doctor or nurse they are dealing with shares a language and common understanding of the medical care they had before, this gives them some kind of continuity of care, and also allows the focus to be on the treatment."

To date it said it had recruited 50 nurses and 10 doctors in Dohuk, 50 nurses in Erbil, and was in the process of taking on an additional 200 more nurses countrywide, though it could not give an exact breakdown of how many of those hired were IDPs.

The Iraqi Red Crescent (IRC) has 4,000 staff and volunteers working to support IDPs across the country, and of those, some 600 volunteers and 59 staff members were themselves forced from their homes.

With the IS frontline shifting almost daily and new displacements happening all the time, the local knowledge from community volunteers and religious aid groups can also be invaluable and help with access to areas cut-off to foreign staff from NGOs or the UN.

Mohamed Khuzai, IRC assistant secretary-general, said that having local knowledge about, and connections to, the displaced had been a major boost to the response.

“We had many volunteers with the Yezidi IDPs in the mountains,” explained Khuzai, referring to the exodus of families from the Yezidi faith from their homes around Sinjar to escape IS, which led to thousands being stranded in the hills and cut off from basic supplies for days.

“They called us [IRC] and told us what they needed - so we were able to arrange to send in food and non-food by helicopter,” he said.

Testimony of a Turkoman IDP

Many Iraqis who had not previously done humanitarian work have also joined in the response effort.

Among them is Abbas Ali*, a Shia Muslim Turkoman who escaped the eastern city of Tal Afar in June, when IS invaded.

Displaced children smile for the camera in the city of Erbil, capital of the semi-autonomous Kurdistan region. Over 1.8 million people have been displaced in Iraq since the beginning of the year as militants from the Islamic State organisation have claime 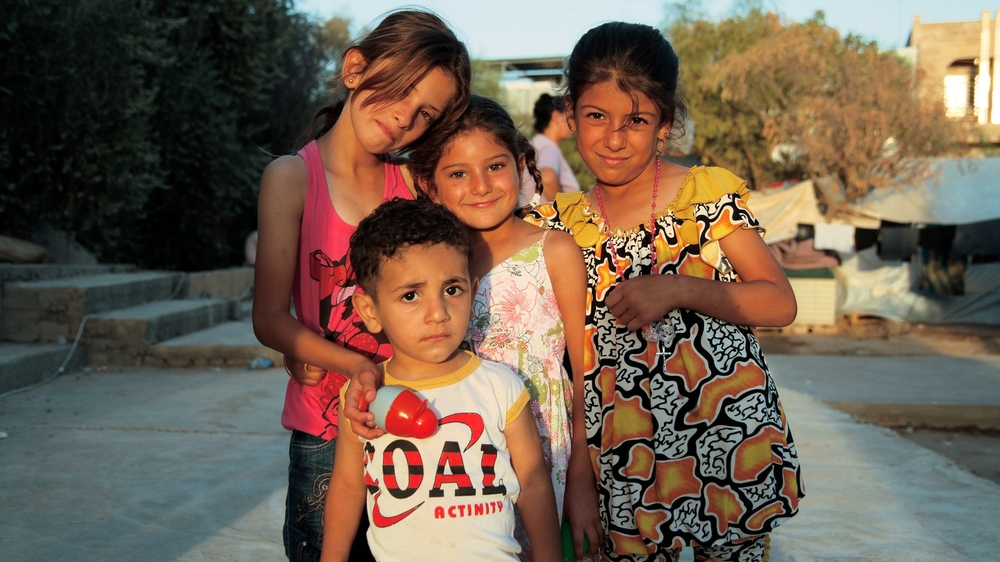 Abbas is now staying in Hillah, in Babil Province, about 100km south of the capital Baghdad, with 30 members of his extended family in two rooms and a hallway.

He told IRIN he put his job as a journalist for a state-owned TV channel on hold to volunteer with IRC, working as a Turkish-Arabic translator as well as giving out food and other relief items.

“When I joined the IRC I thought ‘I need some help’, so I decided to help others. It’s easier for me, I can give the [IRC] ideas about what we need,” he said.

“It is winter soon so the people here will need oil, heaters and blankets, and our children need to go to school.”

Nuhad Shamoon, a supply chain co-ordinator for the International Organization for Migration (IOM) based in Erbil, brings personal experience to his work with IDPs, having been displaced himself from Baghdad to Kurdistan in 2007.

He explained that IOM tried to recruit staff from across different Iraqi communities, and often relied on the help of IDP volunteers at distribution sites to give out blankets and other items.

“Our frontline staff is made up of Kurds, Sunni Muslims, Shia Muslims and Christians, he explained. “We have some in each team so they can deal with the IDPs. These people are vulnerable so we need someone from our team who can relate to them and deal with them correctly,” he added.