Government officials and aid workers are worried about the safety of people drawn to the site of a catastrophic mudslide in northeastern Afghanistan in search of aid handouts; they warn of the risk of further landslides and flooding.

Many of those in tents around the immediate site of the disaster have received basic aid, but the distributions are now attracting villagers from the surrounding area, according to Noorkhan Haidari, a member of the Afghan civil-political youth organization Afghanistan 1400.

There have been reports of fighting breaking out over aid handouts.

“We are leaving the area now and crowds are dispersing. Fights broke out over aid and bullets started flying,” one aid worker, who asked not to be named, told IRIN.

“Both yesterday and today fighting broke out and those most in need are not able to get something,” said Haidari. “The issue is quickly becoming political with support [aid] going to elders from certain villages. We all have a lot of experience working with the government and we know they are not able to manage this situation…

“We need to move people to a safe place: one place to find out who is who, [and] a place where we assign food and non-food items to those who really need it. The government now will have to force people out because now that they know aid is here they will not want to leave. And sooner and later, this mountain is going to come down, it is not a safe place.”

While initial reports indicated at least 2,000 people were killed in the landslides that struck Argo District in northerneastern Badakshan Province on 2 May, government officials now say a final figure is likely to be around 1,000.

“We don't know the exact population of the village,” said Fawzia Koofi, a Member of Parliament and women's rights activist originally from Badakshan. “But, we do know that there were 300 houses destroyed, so we are guessing it is around 1,000 people - which is still a huge amount.”

The mudslide came after weeks of rain which caused widespread flooding in the north. The total number of people affected by the flooding is 71,000 with 159 confirmed dead (not including the mudslide victims), according to figures published by the UN Office for the Coordination of Humanitarian Affairs (OCHA).

“We are leaving the area now and crowds are dispersing. Fights broke out over aid and bullets started flying”

The mudslide in Argo District has stretched local disaster management preparation to breaking point. “Based on our capabilities, we had a plan in place,” Sayed Aziz Qazi, head of international relations at the Afghanistan Natural Disaster Management Authority (ANDMA), told IRIN. “But the disaster is so massive and it is such a huge loss…

“At this point, we are working on preventing further damage. We are talking with local authorities, trying to spread awareness about what needs to be done.”

The search for survivors was called off on 3 May, with international military forces, UN agencies, government bodies and NGOs focusing on the distribution of clean water, food, shelter and medicines.

Attention is also turning to the impact of trauma on survivors. “I am seeing around 100 people a day,” said Mohammad Shahim, a doctor with the Afghan Red Crescent Society. “We are mainly dealing with physical injuries caused by the landslide and mental problems such as shock, stress and depression.”

As support is given to the more than 4,000 displaced victims in Abi Barik, concerns are growing over flooding, with the river at the bottom of the valley blocked by the mudslide.

Despite calling off the rescue search, Abi Barik residents still dig for their loved ones who were buried in metres of mud and debris after the mudslide 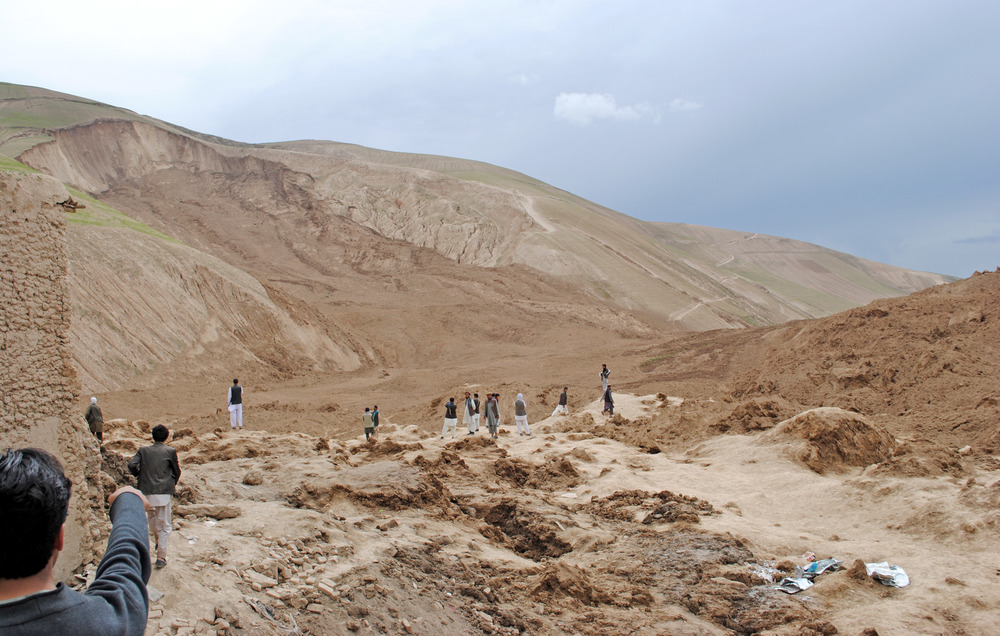 On the evening of 5 May, residents in the area told IRIN continuing rainfall had caused flooding and prevented them from crossing over to the other side.

Noorkhan Haidari from Afghanistan 1400 is one of 20 young people from various Afghan civil society organizations within the Coordination Committee for Argo Relief who are present in the area.

Other ordinary citizens and volunteers also came to help. Their aim, said Haidari and others, is to fill the gap.

“There are important needs of the people that government is not in touch with,” said Haidari. “For example, we found people in need of drinking water and toilets…

“We could not find plastic [portable] toilets in [the provincial capital] Faizabad, so we hired carpenters to come here and construct three inexpensive toilets. We also brought in five water tanks and put them in places further out so people have access to clean water.”

According to Haidari, other officials and humanitarians talk of moving the 1,000 internally displaced families out of the area.

Government officials say the disaster has brought an unusual degree of support from civil society groups nationwide. A group of ethnic Pashtuns from Kandahar are expected to arrive on Thursday (8 May) to deliver aid to the mainly Tajik village, after raising 7 million Afghanis ($125,000) in aid.

“Because Badakhshan is part of Afghanistan it is our responsibility to help and not look for international aid,” said Haji Hekmatullah Shadman from Kandahar-based NGO Shadman Gham.

“A decade ago we were fighting against each other and now we need to help each other. The aid is not a lot but it is important that we go ourselves, sit with the people and share our condolences and give them whatever we have.”

Following a visit to the landslide area, UN officials stressed the longer-term needs of people displaced by natural disasters as well as the need for long-term preventive measures.

“Helping people with livelihood assistance and permanent shelters is what we are working on,” Matt Graydon, International Organization for Migration's (IOM) media officer, told IRIN. “Development strategies getting people out of the line of disaster is key for these [disaster-]prone areas in Afghanistan's north.”