A church school in India for young ethnic Chin migrants from northwestern Myanmar is training a new generation of missionaries, who will return to their mountainous homeland across the border to make education more accessible, especially in remote rural areas.

“We need to improve the education system back home so we can help provide schools for children. God willing, I will return to my community to spread the word,” said Simion Fungneizam, 22, a student at the Carson Baptist Teaching College in Aizawl, the capital of India’s northern Mizoram State.

The Chins are Myanmar’s poorest population: the United Nations says at least 73 percent of the estimated 500,000 largely Christian group live below the poverty line. Like other minorities, the Chin fled years of poverty and military rule to Mizoram, where approximately 100,000 now live.

Some of Fungneizam’s classmates were born in India to Chin parents who fled political unrest following the 1988 uprising against the military government. Others have come to India with their families in recent years in search of a better life.

According to Human Rights Watch, arbitrary arrest and detention, torture, and forced labour are the primary reasons for departure from Myanmar, while the Delhi-based Institute for Peace and Conflict Studies (IPCS) found Chins also cross into Mizoram state in search of economic opportunities.

But in India they have no legal status, which limits their opportunities and access to services, and makes them vulnerable to exploitation. Fungneizam told IRIN he has watched his parents’ generation struggle to eke out a living, doing sometimes crippling manual labour.

Decades of grinding poverty have taken a toll on education in Myanmar, while a lack of facilities for the children of refugees and migrants in Mizoram means getting a decent education on either side of the 1,463km border has not been easy.

Missionary schools in Mizoram are trying to fill this gap by helping young people get qualifications that will improve their lives, and then improve the educational opportunities for future generations in Myanmar, teachers and students say.

An opportunity to advance

At Carson College, the students study, eat and sleep and pray in the same small compound. For almost all of them, this is the first serious opportunity for focused education they have had.

“In Myanmar it’s hard to get educated. Not many people have enough money to continue going to school, and there are very few teachers,” said Vanbawibeklian, 17, a first-year student at the college. He comes from a remote village with just a few families in northern Chin State.

En route to school, some students are also prepared to head to the fields, demonstrating a tension for educators between school and home responsibilities for Chin State's schoolchildren 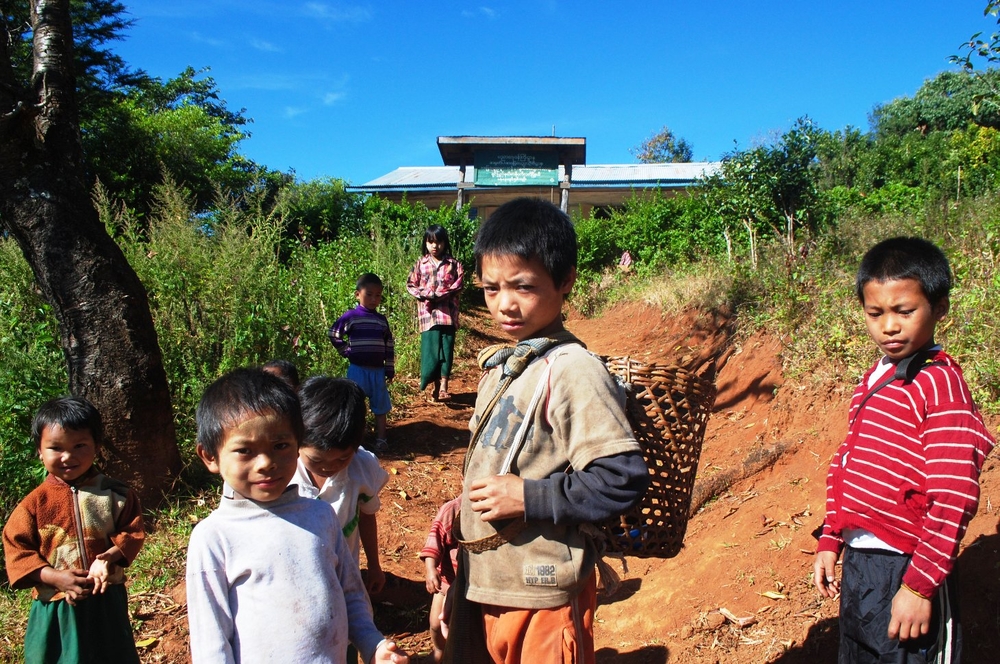 In 2013, Chin had approximately 1,000 schools, in which 5,600 primary and secondary school teachers served 121,000 students, according to the Country Agency for Rural Development (CAD), a Catholic charity working in the state. Classroom resources are in desperately short supply and children in rural areas often have to walk for hours to get to school, causing many to drop out, the charity noted.

“They have enough teachers, but they aren’t properly trained,” Joseph Win Hlaingoo, director of CAD in Yangon said.

Chins in India told IRIN they can send their children to primary schools only if they can pay the fees, and sometimes they are forced to bribe the officials to keep their children in school. A 2011 report by a group of NGOs from the United States said Chin children in Mizoram struggled more than local children to pay school fees, and were less likely to be able to afford school books, uniforms or meals.
Gaining entry into Indian secondary schools and universities can be even more difficult for Chins, who are often denied enrolment because they do not have national ID cards or birth certificates.

Most young Chins hope to find work to help support their families rather than getting an education, but with employment opportunities scarce there is a strong temptation to fall into illegal work like selling drugs, including methamphetamines and hashish, or alcohol, which are banned in Mizoram.

“Some families ask their daughters to sell alcohol or drugs if they are not earning enough money,” said Zo Sangbuii, president of the Women’s League of Chinland. “Education would be a positive way to help young people improve their chances in life.”

An opportunity to develop Chin

Church schools are some of the only institutions in Mizoram offering teacher training to Chins. “This is not simply an education for our students. We hope one day they will return to the villages… where they came from, in order to serve their own people,” said Pastor Vanlelruata, the founder of the Carson School.

Students study maths and science, and receive intensive English language training. At the end of the three-year programme they earn a bachelor’s degree. Students are often subsidised by the church if they cannot pay the fees.

A handful of graduates have already gone back to start schools in the rural areas of Chin. Vanlelruata said when the students arrive at the school, “They are shy, but by the end [of their studies] they have a vision [of a better future].”