The region around Bandiagara, in central Mali’s Mopti Region, is struggling to cope with the dual crises of successive poor harvests and the near-total collapse of its once-thriving tourist industry.

Nestled among giant boulders at the base of the Bandiagara Escarpment is the mud-built village of Nombori, home to around 1,200 ethnic Dogon people. There, Pilif Guindo's small clinic is struggling to cope with a steady increase in child malnutrition.

The clinic sees 15 new cases of malnutrition per week, a threefold increase in as many years, explains Guindo, a doctor who practices both modern and traditional medicine. "The people used to eat well here," he tells IRIN. "But now, the mothers are not eating well, and the babies are not getting milk."

Guindo says he usually hands out vitamin B tablets and advises the children to eat more. But after years of poor rains and disappointing harvests of the staple, millet, food insecurity is rife. A recent government food-security study, not yet out, found that Bandiagara was currently the area most at risk.

After an extended dry spell in September, other parts of the country with below-average harvests are Koulikoro, Ségou and Kayes, according to the Famine Early Warning Systems Network (FEWS Net).

A December 2013 food-security assessment by the government and partners showed Bandiagara at “phase 3”, or crisis levels, with 167,479 inhabitants either in crisis or emergency mode.

Sally Haydock, head of the World Food Programme (WFP) in Mali, said, "It's clear that people have fewer than two months’ stocks after the harvest.” WFP expects those stocks to run out by the end of January.

The agency says it is organizing food delivery to the area, and that it is looking into ways to reduce people’s vulnerability to drought and other shocks. WFP also hopes to start undertaking regular food-security assessments in the region soon.

YAGTU runs a small plant that produces protein-rich dietary supplements, which are primarily distributed to children. The organization aims to improve an otherwise nutritionally insufficient diet, in which millet is served with a sauce made from the leaves of the Baobab tree. The organization estimates that just 10 percent of the land around the Dogon country is suitable for cultivation.

Alongside agriculture, the Dogon have for decades relied heavily on income from a thriving tourist industry. But after a series of kidnappings, and the 2012 takeover of northern Mali by Islamic militants, tourists have stopped coming.

Bandiagara in Mopti region of central Mali used to attract thousands of tourists annually who have long been drawn to the Dogon's rich and unique cultural heritage. 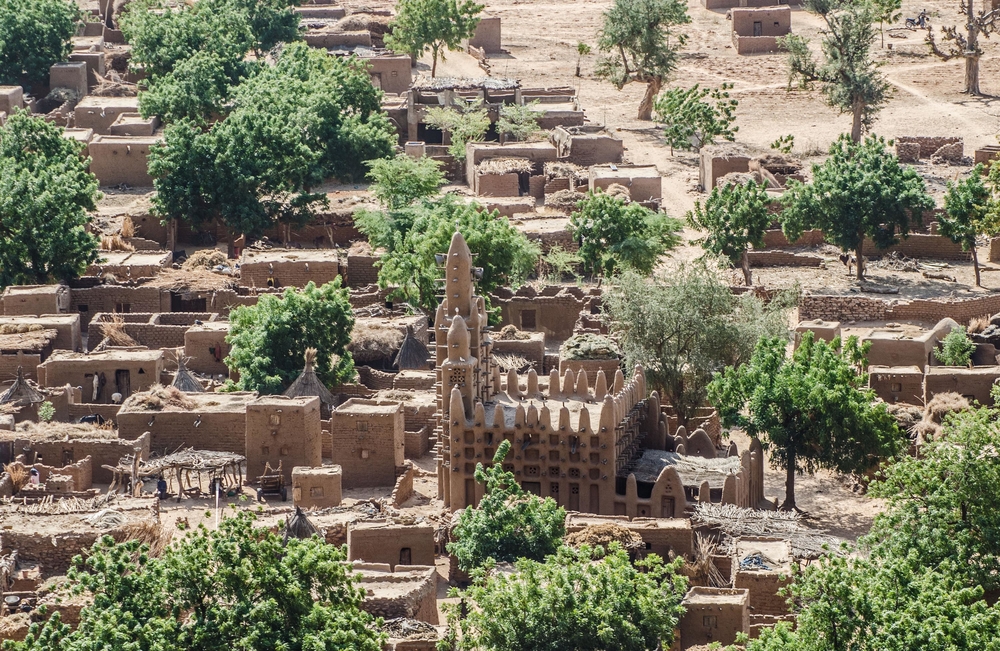 Bandiagara's hotels and restaurants are largely empty. Touts desperate for work offer drastically reduced prices for their services to the few arriving visitors.

Artisans cut away their profit margins by travelling hundreds of miles to find markets for their products. In darkened storerooms, intricate bronze figures and wooden masks lie forgotten under layers of dust and cobwebs. People of working age have left in their thousands, say residents, to seek work in other parts of the country.

Many who stayed are now unemployed. "Please tell them we have no rebels here," implored one frustrated former baggage carrier, who now passes his days drinking tea in a mechanic's shop.

Ousmane Kamia, a tour guide from the Dogon village of Dourou, says he and his family have been struggling since the tourists stopped coming. "It's a big problem. Before I used to be able to help my family, buying food or medicine," he told IRIN.

Work started to fall away after a series of kidnappings in 2009. Finally, last year, Kamia’s family was forced to sell their donkey, which had been crucial to the transportation business that had brought in their only other significant income.

Locals say the shortage of cash in rural areas has prevented people from seeking treatment in Bandiagara and other regional towns.

In Bandiagara, the hospital is not crowded with cases of malnutrition, despite the many reports indicating the problem is on the rise. In fact, Abubakar Kouyaté, a doctor who works at the Bandiagara hospital, says they have not been seeing any increase in patients at all, a fact he attributes to people being unable to afford transport and the cost of treatment.

Meanwhile, Guindo, the doctor in Nombori Village, is struggling to deal with the sharp rise in patients at his tiny and chronically under-equipped practice. He does not receive help from aid agencies, but gets by with small contributions from locals.

WFP says that with a 6 percent decrease in harvest size this year across the country, it will need US$215 million to combat food insecurity in Mali in 2014.

The organization estimates that 1.3 million people are malnourished in the north of the country alone, where lingering instability in certain areas has disrupted the food supply and hampered the delivery of aid.