This article is part of our in-depth coverage. Read more like this...
BOSSANGOA

The recent change of leadership in the Central African Republic (CAR) offers a glimmer of hope for an end to sectarian violence, but earlier interviews with Christians and Muslims seeking sanctuary in separate locations in the northern town of Bossangoa reveal how entrenched attitudes have become after so much violence.

"The chaos is over; the pillaging is over; the revenge attacks are over," said Alexandre-Ferdinand Nguendet, speaker of the country's provisional parliament and interim president since Michel Djotodia, who had been in power since a coup in March, resigned from the presidency on 10 January.

Djotodia said he had been unable to rein in the opposing forces, which have wreaked havoc in the country for many weeks.

The most difficult place to put an end to the revenge attacks - between the remnants of the mainly Muslim Seleka rebel alliance that brought Djotodia to power and the mostly Christian self-defence units known as “anti-balaka” - could be in Bossangoa, where the sectarian violence first flared up in September 2013.

Several attempts by leaders of both religions to bring about reconciliation have borne no fruit.

“I’ve found a town divided in two,” said Abdou Dieng, humanitarian coordinator for the United Nations earlier this month. “One part of the population, the Christians, is camping at one site, and the other part, the Muslims, [is] camping at another site. There’s a total absence of dialogue. Everyone is afraid. Nobody wants to go home, and conditions in the camps are abominable.”

The anti-balaka (which means “machete-proof”) launched their first attacks here in September, prompting reprisals by the ex-Seleka. Since then, the number of internally displaced people in the two main camps has multiplied. There are around 36,000 Christians living in the grounds of the Catholic mission, and 4,000 Muslims taking refuge at a school.

Life in the camps has grown increasingly difficult, and is made worse by the fear and distrust that prevent communication between the communities. But the displaced insist a dialogue is essential.

Mustafa Ali has been at the Muslim site for several weeks. “We want to go home because this place is no good,” he said. “We are afraid of the anti-balaka. I’m living here with my family, and my wife has 10 children. There are no medicines or food - or the prices are high. A cube of Maggi [beef extract] costs 25 francs [about US$0.05]. Soap, salt and sugar are all expensive. And there’s no peace here. Even in daytime we’re afraid. Christians and Muslims are both afraid of each other. It’s time this was brought to an end.”

The same feelings are shared by the Christians at their displacement site.

Monique and her family have been living there for four months. “There’s no agreement between us and the Muslims,” she said. “They won’t let us buy anything on their side, and we refuse to let them buy anything on our side. The situation is so bad. We’re asking: Who can help us settle our differences? We want our leaders to make peace and help us rebuild our houses, which were burned.”

Several reconciliation meetings organized by religious leaders and the authorities in Bossangoa have yielded no results.

The Muslims accuse the Christians of bad faith and of blocking the negotiation process. Abakar Ahmat, a prominent Muslim who works with the local imam, explained why he thinks the reconciliation has not worked. 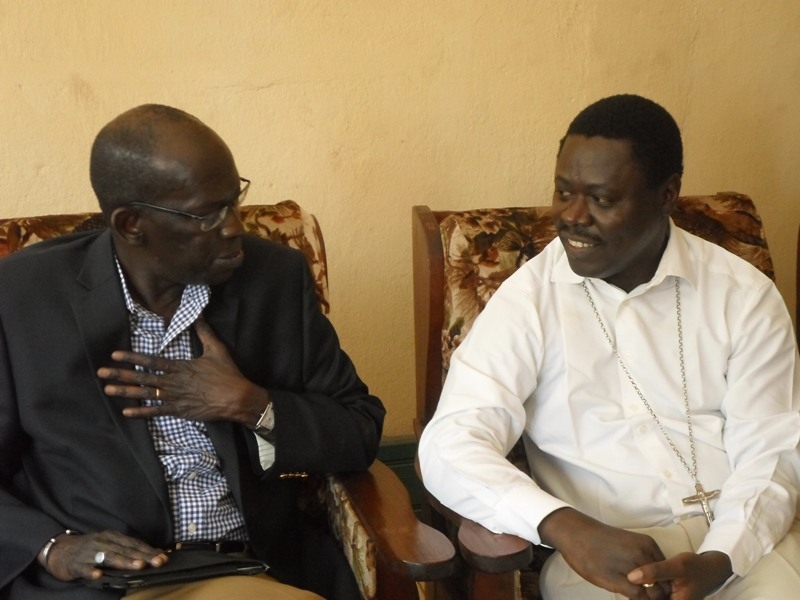 “It’s entirely the fault of the Christians,” he said. “We, the Muslims, have agreed to be reconciled with our Christian brothers, but they won’t want a reconciliation.”

He added that Christians he had spoken to had said they would fight until Djotodia resigned, an event that took place after IRIN spoke to Ahmat.

Meanwhile, the bishop of Bossangoa, Monseigneur Nestor Aziagbia, blames both the ex-Seleka and anti-balaka for holding up the reconciliation process: “Each day we are counting those who have died among the displaced. All our efforts to persuade people to go home have been fruitless,” he said. “We are just not getting the results that we hoped for. For every step forward, we go three or four backwards. The real problem is the Seleka. They need to be withdrawn, but it hasn’t happened.”

Aziagbia says people will not go home unless they feel secure.

“I’ve asked for the regular police to be deployed - police and gendarmerie - so that we can have law and order, and for the displaced to be return to their homes, because that is what everyone wants. Some are ready to go home, but when they get there, they find their houses have been looted, and they are threatened by the Seleka, so they return here.

“I’ve had discussions with the imam. They [the Muslims] are also afraid of the anti-balaka, which prevents them going back home. What is so disheartening is that people see their house just 5m away, but they feel so powerless and unsafe that they can’t even cross the road to get back there.”

Humanitarian organizations working in the town would like to see the displaced go home, as this would improve the provision of assistance.

“There is distrust between the two communities, and it has worsened since December 5 [when anti-balaka and ex-Seleka clashed in Bangui]… A town where people are living 50 or 100m from their homes but can’t go there is an unacceptable situation. Even though we can help people in the two camps, it would be better to help them in their neighbourhoods or in their surrounding villages.”