The government of the Democratic Republic of Congo (DRC) and the former rebel group known as the M23 Movement signed declarations on 12 December formalizing agreements to end hostilities in eastern DRC.

The declarations, together with a Final Communique on the Kampala Dialogue, were released by the International Conference on the Great Lakes Region (ICGLR) and the Southern African Development Community - which together sponsored almost a year of fitful peace talks in the Ugandan capital. The documents articulated each sides’ commitments on a range of issues, including M23’s renunciation of rebellion and transformation into a political party; the government’s limited offer of amnesty to combatants; the release of prisoners; the demobilization and reintegration of former rebels; national reconciliation and justice; and social security and economic reforms.

Kinshasa also committed itself to quickly moving ahead to facilitate the return of refugees, in line with tripartite agreements signed with neighbouring states, and to help internally displaced civilians, who number more than two million in eastern DRC, go back home.

Through his spokesman, UN Secretary General Ban Ki-moon said the declarations constituted a “positive step towards ending cycles of deadly conflicts that have caused immense suffering to the Congolese people.”

Yet analysts remain divided on whether political dialogue or military means is best to address the problem of armed rebellion in eastern DRC, even as focus now shifts to the northeastern Orientale Province, after relative success in North Kivu. Some argue for a mix of both: “neutralizing” armed groups while engaging in security sector and institutional reforms.

Below is a selection of analysts’ reactions to the declarations.

Aaron Hall, a senior researcher with the Enough Project: “The signing of the Nairobi Declaration[s] is a small yet positive step forward for peace in eastern Congo. Significant challenges remain, however. With the conclusion of the Kampala process comes a tenuous closure that now allows Congo, Rwanda, Uganda and the ICGLR to pivot focus to the broader UN Peace and Security Framework, which aims to address a number of drivers of conflict and instability in the region.

“The ICGLR and its international partners should use this momentum to bring those states together under the UN Framework to finally address systemic drivers of conflict in eastern Congo that have led to the proliferation of groups such as the M23. This includes agreements on regional security and national sovereignty, refugee resettlement, natural resource exploitation, and economic integration. There can be no single military solution to the instability in eastern Congo. A regional political agreement on peace and economic growth is paramount.”

Will Stevens, spokesperson for the Bureau of African Affairs in the US Department of State: “The end of the M23 represents an important step towards resolving the persistent insecurity in eastern DRC, but much work remains to be done. The United States urges the parties to promptly implement the contents of their declarations, starting with the immediate disarmament, demobilization and reintegration of the M23 in the DRC, Rwanda and Uganda.

“We welcome efforts by the DRC military [FARDC] and the UN peacekeeping mission in the DRC [MONUSCO] to neutralize the threat of the FDLR [Forces Démocratiques pour la Libération du Rwanda] and other armed groups in eastern DRC. We urge the DRC government to prioritize civilian protection and security and to maintain or establish access to public services in recaptured areas. We urge the DRC government to ensure that all of those responsible for war crimes and crimes against humanity are held accountable.”

Christoph Vogel, a Mercator fellow and DRC analyst: “Despite being hailed by several heads of state and government in the region, as well as the various special representatives, the symbolic value of having any sort of deal, agreement or accord outweighs the practical and political implications by far. The three documents display a lesser degree of precision than, for instance, the draft Kampala accord of early November 2013. Key questions, such as amnesty, reintegration, return of refugees, political reforms and the role of neighbouring states remain unsolved, [being] only superficially addressed in the declarations.

“This cannot really be called a peace deal”

“Both the Congolese government and international stakeholders need to fine-tune their approach toward other armed groups and communities and find ways not to neutralize armed groups in the first place, as the current UN resolution says, but to neutralize the existing security dilemmas between communities in a militarized context. Taking up [UN Envoy/MONUSCO head] Martin Kobler’s concept on so-called islands of stability, it is vital to peace in Congo to get rid of mere islands and work for peace across the conflict landscape.

“The fate of key M23 leaders such as Sultani Makenga and Innocent Kayina remains unclear, at best, as they are still on Ugandan territory. Similarly, the demobilization of rank-and-file M23 combatants may turn into mere lip service as long as the relative provisions made do not entail continued efforts in making the planned new DDR [disarmament, demobilization and reintegration] programme ready.”

Thierry Vircoulon, a senior analyst with the International Crisis Group: “First, this cannot really be called a peace deal. Uganda… DRC and M23 all signed individual documents but none of them is called a peace agreement, and there is no single document with the signature of the three stakeholders of the Ugandan negotiations process. These documents are the result of the pressure of the international partners on the Congolese government. This one made clear it did not want to sign a ‘peace deal’ with the M23, but at the same time it was necessary to close down the talks in Uganda and to provide a solution for the M23.

“What will be the justice mechanism to deal with the leaders of the armed group (M23) is now the key question. It is not clear whether the Congolese government wants to prosecute them or will try to accommodate them in a way or another. The international partners (the UN, EU, AU, etc.) seem to be comfortable with the amnesty principle as long as amnesty does not apply to the worst crimes in the international legal system. The Congolese authorities, the UN and other stakeholders still have to articulate a clear position about this key issue.”

Stephen Oola, a transitional justice and governance analyst at Uganda's Makerere University Refugee Law Project: “Even though we welcome any effort towards finding a lasting solution to the DRC problems, it is being over-optimistic to expect the symbolic peace deal to end M23 conflicts.

“Military defeats seldom address the reasons why people pick up arms, and so long there is no genuine commitment and mechanism to address Congolese multiple identity, ownership, belonging and resource questions alongside [a] predatory neighbouring regime's interest, I am sceptical the recently signed document [the declarations] is anything worth the paper to celebrate as peace builders.”

Heavy rain pours in Bunagana, a town East of DRC that was the former political stronghold of the M23 rebellion before the Congolese army took the town. (November 2013) 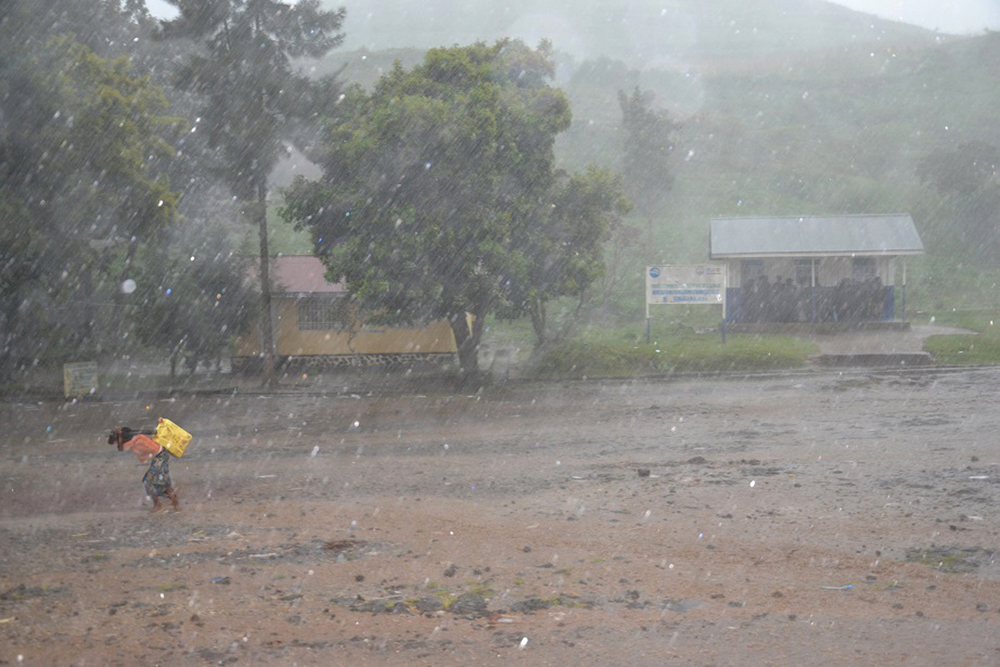 Chantal Daniels, a policy and conflict advisor for Christian Aid: “Whereas the declarations have internationally been seen by many as an important step towards 'peace', there is much less support for the document in Congo itself. The DRC government has committed to many issues, such as amnesty under specific conditions and the disarmament, demobilization and social reintegration of M23 fighters, the establishment of different committees in which ex-M23 members will participate, and much more. The government has already committed to some of the issues in the past, so not all is new. But the key issues are… how will all this be implemented, did the DRC government and the M23 sign the same issues, and what will these negotiations and declarations do with the demand of other armed groups?

“Addressing the wider presence of armed groups in eastern DRC requires not only a call for surrender and military operations, but especially new efforts in the field of disarmament, demobilization and reintegration (DDR) of combatants - activities need to focus on the reintegration of these men and women back into communities and prevent general integration into the FARDC without vetting."