Just 4,298 of the 14,000 primary school-aged children in Mbera refugee camp in eastern Mauritania are enrolled in camp schools, aid agencies estimate. Now that the UN refugee agency (UNHCR) is moving on from covering the emergency needs to longer-term issues, agencies are grappling with the challenge of getting enough schools built, improving education quality, and coming up with a continuum plan so that Malian refugee children have decent schools to return to when they go home.

In emergency responses, education is often deprioritized by donors and responders, and schooling in Mbera was no exception. “Since the start we’ve not had enough funding,” said Joelle Ayité, head of education for the UN Children’s Fund (UNICEF) in Mauritania. “Since 2012 education has been a forgotten sector, despite the fact that half of the refugees are of student age.” Money has been coming in gradually, but “it’s not enough to cover the needs”, she said.

If secondary school-age children are included in the tally, just 17 percent of children in the camp are attending official schools, although some attend informal schools run by parents or retired teachers.

Momo, a refugee spokesperson in Mbera, is a retired teacher and education expert with decades of experience. His shelter is usually full of Tuareg notables and UNHCR staff discussing aspects of the aid response, or children who attend his private school. He is deeply familiar with refugee conditions in Mbera, having been a refugee here in 1997 during a previous Tuareg rebellion, when he served as quality inspector of the camp’s schools.

The official classes that have been set up are overcrowded – some have more than 300 children enrolled – overwhelming the teachers. There is a severe shortage of classrooms. Several of the initial schools were constructions of plastic sheeting over a wooden framework, and were ripped apart by fierce desert winds. A contractor team tasked with building more durable schools absconded with the funds, said Hovig Etyemezian, who runs Mbera camp on behalf of UNHCR.

An ambitious plan to build 88 semi-permanent schools using local materials is being implemented by UNICEF and its partner, NGO Intersos, but the project is still in its early stages.

Backott Ag Madelhadoui, a teacher, has 340 children enrolled in his class, though only about 150 were crammed into the classroom when IRIN visited. “There are many absentees,” he said. Nonetheless, “controlling such numbers is almost impossible,” he told IRIN.

Each teacher is paid US$60 per month by UNHCR and UNICEF, and receives additional food rations for his or her family, but most complain the remuneration is inadequate and Ag Madelhadoui said he could make more running a camp shop. “We spend six hours teaching each day and work every night to prepare lessons – we should be paid more. We have children to support,” he told IRIN.

But agencies are hard-pressed to pay more, given the lack of funds. Two of the 12 officially employed teachers in the camp are Malian state teachers and thus continue to receive salaries across the border – the rest are community teachers.

Oumar Ibrahim was a community teacher who responded to parents’ calls to educate their children at the school in their village just outside Timbuktu town in Mali. He teaches a class of 65 students aged 12-18 – one of the few secondary classes in the camp. His classroom was equipped with desks, each child had a notebook and pen, and they were drawing maps when IRIN visited. But teaching such numbers is hard. “We don’t have enough space. We need more classrooms,” he told IRIN.

Students in refugee camps in Mauritania, Niger and Burkina Faso follow the Malian curriculum, though some classes at Mbera are in French and Arabic. Some of Ibrahim’s students are Mauritanian, he said. Ayité notes that this is often the case in camps: “Everyone has a right to go to school, no matter where they’re from.”

UNICEF said it took a lot of encouragement and awareness-raising for some families to send their children – particularly girls – to school. “Now, more and more are starting to come,” said Ayité.

The majority of Malians in Mbera are nomadic or semi-nomadic and often do not send their children, particularly girls, to traditional schools. Many children attend Koranic schools, known as madrassas, as the secular state schools do not meet their priorities, said Momo.

UNICEF found that many children – 75 percent of them girls – aged 12-19 were illiterate and has set up literacy training groups for them. “It’s a very good opportunity to educate children who have not had the chance,” said Ayité. The idea is to train them in a trade that they can use back home.

Ten-year-old Mariama Wahlet Abdullahi told IRIN she had attended a madrassa in Nara, in the Timbuktu region of Mali, which she preferred. “There I could learn the Koran,” she told IRIN. But she is happy to be attending school in the camp.

Several of the initial schools built in Mbera refugee camp were destroyed by strong desert winds. 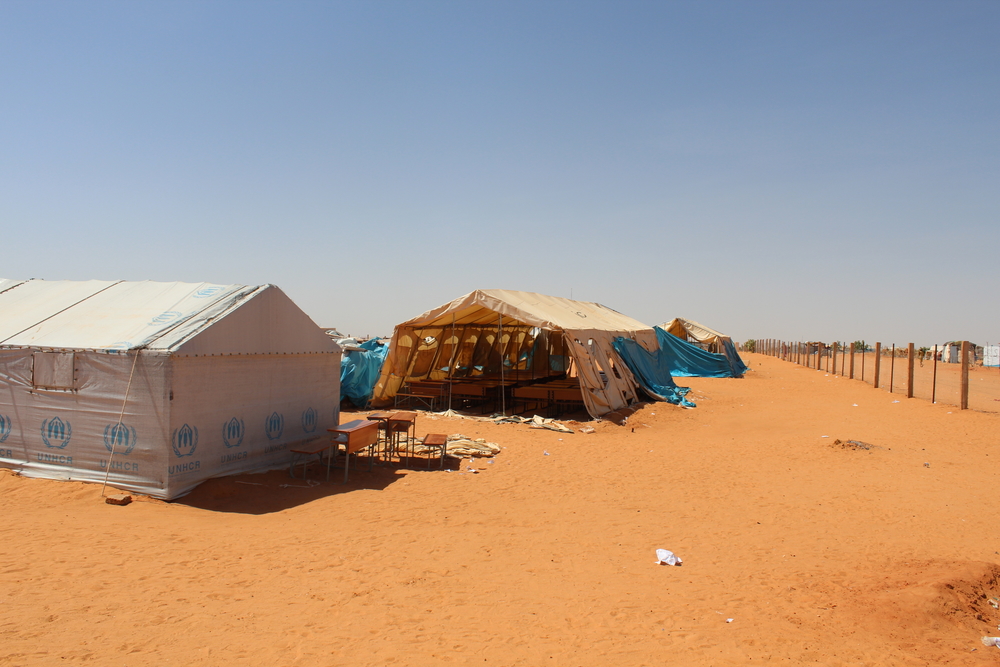 “You need to create schools that are as good quality as those back home, if not better,” said education consultant Barry Segnan, who runs his own education NGO, Education Base.

Momo agrees. “There’s no point in just setting up a shell of a school – it’s not worth it. Schools need good teachers, teachers need lamps so they can plan their lessons, they need pens – these things that are logical for us are not a priority for others,” he told IRIN.

Segnan was assessing priority education needs in all the main Malian refugee camps, with a view to outlining short- and long-term solutions. He was worried about quality - no school can exist in a vacuum, its quality must be regularly assessed - but he also noted that “You can’t maintain quality over the same level unless you’re willing to pay for it.”

Ayité believes the responsibility for maintaining quality lies with the Mauritanian education authorities, with the help of UNICEF, Intersos, Plan International, and other partners.

Refugee education must be approached with an eventual return in mind, said Segnan, and that means focusing equally on quality in camps and in northern Malian schools, which have long been neglected and are currently floundering due to a lack of teachers.

An October assessment by UNESCO concluded schools were “barely functioning” in northern Mali, with just 52 percent of primary schools in Timbuktu running, and none having re-opened in Kidal.

A regional strategy must also stress keeping in school those nomadic children who never attended in Mali, he said.

Education authorities have long struggled with how to approach nomadic education: supporting schools on the move, or encouraging children to settle with relatives in towns or villages. Many Tuareg children attend community-led nomadic schools, where quality is very difficult to maintain said Segnan.

Most families Segnan spoke to said they wanted to make sure their children continued schooling back home. But northern Mali has the country’s lowest attendance rates according to Malian education officials.

UNICEF is working with the Mauritanian authorities to provide all returnee children with a certificate of attendance and validation of their course-work.

Segnan said there were other issues education providers in Mauritania, Burkina Faso and Mali should also be worried about, like what to do with the youth population, who are often neglected when it comes to schooling or training; and about coming up with a coherent teacher training package.

“We need youth centres. Give them training. Let the boys get driving licenses – it opens doors,” he suggested by way of example.

Rather than creating perfect, expensive teacher training programmes, “keep it simple” he said, pointing out that for $500 a teacher could be pretty well-trained in the basics.

Etyemezian admitted, “There is vast room for improvement” in the camp’s education, and the sector - specifically logistics and quality - is now one of UNHCR’s priorities.