Among the refugees entering southeastern Chad from the Darfur region of neighbouring Sudan in the past few months are thousands of nomadic pastoralists.

The refugees have been arriving with their cattle in Tissi District, a region along Chad's border with Darfur and the Central African Republic (CAR), and have been relocated to Abgadam camp (radius 10km), about 40km from the Sudanese border.

The government issued an ultimatum for the new refugees not yet in Abgadam to go there by 15 September. Just over 18,000 of the close to 30,000 Darfur refugees registered in 2013 are in Abgadam, with 2,117 of them in the Goz Amir camps, also in southeastern Chad.

The new influx calls for innovative responses to what is not a usual refugee situation. “These are not the typical helpless refugees," commented an aid worker who preferred anonymity.

"How do you deal with an emergency for people who believe national borders don't exist? You cannot fix them [in a location]; it will not work. There is a need for innovative approaches," said Mamadou Dian Balde, the UNHCR deputy representative in Chad.

"They need freedom of movement, a large area, a settlement, not a camp per se. But how do you do this in a durable way? There is a need to develop community-based programmes for livelihood sustenance."

"In this case, livestock represents their daily livelihood during their flight as well."

At the new refugee site in Abgadam, the refugees have enough space for their accommodation and for their herds, according to UNHCR. The refugees are not locked up in the camp and are quite free to seek pasture with their cattle.

The UN Refugee Agency (UNHCR) estimated that so far this year 75 percent of Sudanese refugees in Tissi District, a border region along Chad's borders with Darfur and the Central African Republic (CAR), were herders and 25 percent farmers; 462 of them were from CAR, according to a report by the UN Office for the Coordination of Humanitarian Affairs (OCHA).

The concentration of cattle in the new camp could pose a risk of livestock diseases, according to OCHA. The size of the new herds in Abgadam also remains unknown: local culture forbids the counting of household livestock as it is considered as a bad omen.

UNHCR intends to mobilize funds to vaccinate livestock in Abgadam and, with the UN Food and Agriculture Organization (FAO), is planning a livestock programme.

Porous borders and unchecked animal movement are often responsible for the spread of animal diseases as is other transhumance (the movement of people and their livestock) brought on by war and political upheaval, said Tesfai Tseggai, a regional laboratory and epidemiology specialist with FAO’s Emergency Centre for Transboundary Animal Diseases.

“Pastoralists’ concern goes beyond [the search for] animal feed and water for their animals, as they migrate with their families and households. In this case, livestock represents their daily livelihood during their flight as well.”

Refugee women and children seated under a tree as they await pre-registration by UNHCR at Abgadam refugee camp, Chad. July 2013 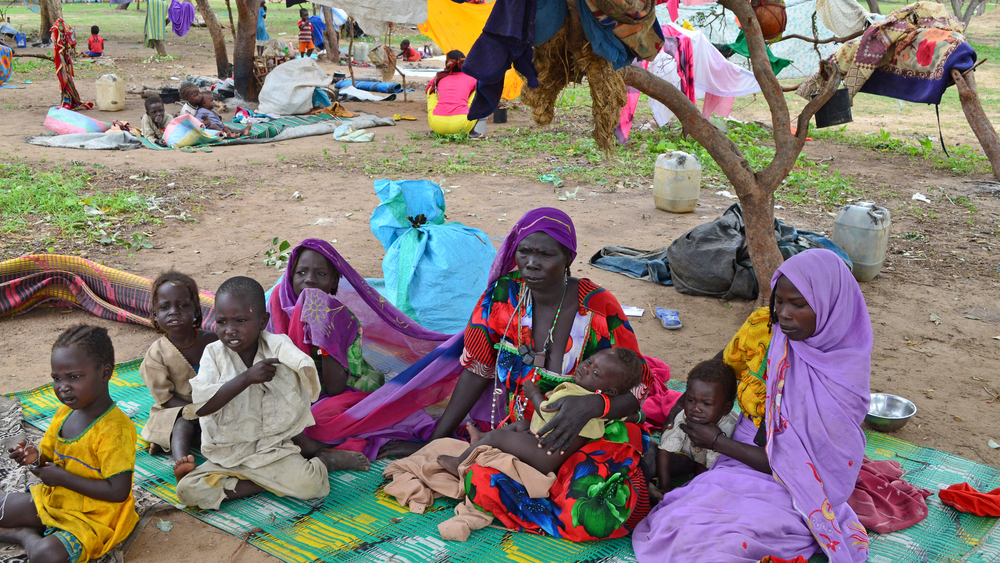 In a situation such as in Chad, Tseggai said, “the segregation of new [livestock] arrivals from co-mingling with the resident animals, and vaccination at quarantine posts, where veterinary inspection is possible, needs to be implemented…

“In places where border control is not possible, or does not exist, awareness-building and communication on [the] prevailing situation for both the immigrating pastoralists and the hosts can go a long way in disease mitigation and livelihood conservation.”

Most of the new Darfur refugees and former Darfur refugees now back in Chad are women and children. Some of the men who have crossed the border are believed to be fighters.

IRIN spoke to some women in Tissi town who indicated they would be willing to follow their husbands back into Darfur. But the potential movement of fighters across the border is a concern.

"We want to maintain the civilian character of asylum. It would be bad if they go back [to Darfur] and sustain the war. Geo-strategically, it is important to sustain peace in the area [eastern Chad] because of the Chad-Sudan peace agreement," said UNHCR’s Balde.

Southeastern Chad is dominated by ethnic Salamat pastoralists who also live across the border in Darfur.

Given the potential for tension between the host communities and the nomadic pastoral refugees, Balde said, "people who are constantly on the move are not often trusted by the host community. We need to work towards peaceful coexistence."