A thin wall was all that separated Syrian refugee Ahmed Al Hemsi from his 62-year-old father at Cairo International Airport when immigration officers told his father he would not be allowed into Egypt.

“He was crying when he talked to me on the phone,” Al Hemsi, 26, told IRIN. “This was the first time in my life I heard my father crying.”

Al Hemsi's father, who had just arrived from Beirut, the capital of Lebanon, is one of thousands of Syrians affected by a new set of security measures enacted by Egyptian authorities following the ouster of former president Mohamed Morsi and bloody clashes between Morsi's supporters and opponents.

Government supporters accuse Syrian refugees of participating in the clashes and taking part in attacks against anti-Morsi demonstrators in several Egyptian cities.

The new security measures include the requirement that Syrian refugees and asylum seekers get entry visas to Egypt from an Egyptian embassy, as well as security approval.

But many Syrians say, given that Egypt severed its diplomatic relations with Syria, getting an entry visa to Egypt from Damascus is impossible, and that the process is difficult at embassies in other countries.

“Our understanding of the new measures is that we are no longer welcome in Egypt,” said Arkan Abulkheir, a Syrian community leader in Cairo. “The fact that some Syrians had committed violations by getting involved in Egypt's politics does not mean that Egypt should punish all Syrians.”

There are between 250,000 and 300,000 Syrian refugees in Egypt now, according to the Egyptian government.

"He was crying when he talked to me on the phone. This was the first time in my life I heard my father crying."

The conflict in Syria has created the world’s worst refugee crisis since the 1994 Rwandan genocide, the UN High Commissioner for Refugees Antonio Guterres said this week, noting that more than 6,000 people were fleeing every day.

Nearly 1.8 million refugees from Syria are registered with the UN Refugee Agency (UNHCR) in Lebanon, Jordan, Turkey, Iraq and Egypt.

The government’s new tougher line includes tighter security checks for Syrian refugees in Egypt, with the threat of deportation for Syrians who do not have residence permits.

Previously, Syrians were able to get a three-month visa when they entered Egypt for the first time. After that visa expired, the Syrians could then apply for a one-year residence, but this is no longer the case.

A security official told the newspaper Al Watan on 11 July that police have orders to arrest Syrians and check them.

Abulkheir was stopped by a policeman on the street a few days ago. The policeman asked about his passport and his residence permit.

“He told me that he would have sent me back to Syria if my residence permit was not valid,” Abulkheir said. “Thanks are to God, the permit was valid for six more months.”

Syrian refugees say they are afraid to go out lest they be arrested or deported.

Before the change of government and these new security measures, Syrian refugees already faced a variety of challenges, but the new measures are making life even harder.

When they came to Cairo two months ago, Al Hemsi, his mother and his younger brother had to leave their father behind in the Syrian city of Daraa because they did not have enough money to buy him a plane ticket.

He finally travelled to Cairo on 8 July after the family raised US$250 for the flight. Since he was refused to entry to Egypt, he has been living in a mosque in Beirut.

“We do not know how he eats or lives his life,” Al Hemsi said. “He does not have any money. He is also too frail to work.”

Another change has come in the education sector. Syrian refugees were previously allowed to enrol their children in state-run schools and universities, and were given equal treatment with Egyptians when it came to fees. This is no longer the case.

Abu Mustafa, a Syrian refugee in his mid-forties, went to a school in 6 October, a neighbourhood southwest of Cairo, a few days ago to enrol his three children for the new academic year, which is expected to start in September. He was told by the headmaster that Syrians are no longer allowed at state-run schools, which have lower fees than private schools.

“He said I should enrol them in a private school,” Abu Mustafa said. “But this is very difficult for me to do.”

To enrol his children in a private school, Abu Mustafa would have to pay a minimum of 7,000 Egyptian pounds (US$958) for each of them. Unemployed and living on charity, this is too much money for him, and for the tens of thousands of other Syrian refugees in the country.

The new measures against Syrians coincide with a fierce campaign against them by some of Egypt's politicians and opinion-makers, who accuse them of harbouring support for the deposed president and of contributing to Egypt's current turmoil. 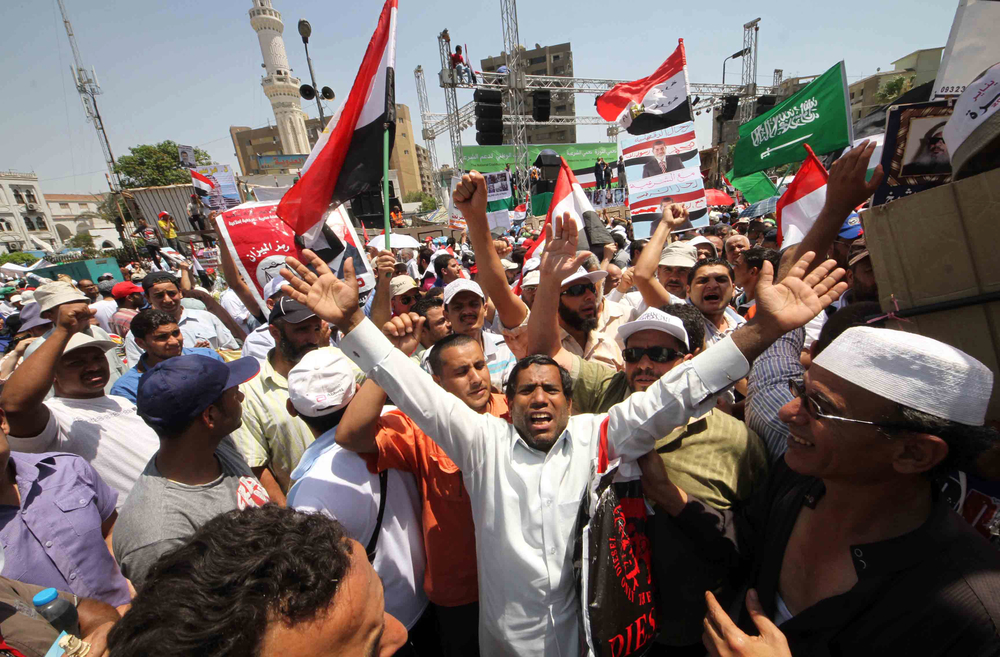 An Egyptian politician recently called for the execution of Syrians and Palestinians if they are arrested while taking part in protests or fights on the streets.

UNHCR in Egypt has called for refugees to receive proper protection.

“We call on the government to ensure that any precautionary measures in the light of the current security situation do not infringe on humanitarian principles and Egypt's responsibilities to provide asylum and protection to refugees,” Edward Leposky, an associate reporting officer at UNHCR Egypt, told IRIN.

He said the Syrian community had expressed anxiety over the current environment, with some Syrians subjected to verbal threats, heightened scrutiny and temporary detentions.

“All this has led to a notable increase in the number of Syrians approaching UNHCR for registration,” Leposky said.

As of 16 July, around 75,000 Syrian refugees were registered with UNHCR in Egypt.