South Sudan marks two years of independence today, but the millions who continue to face displacement, hunger, disease and extreme poverty will be hard pressed to find any reason to celebrate.

Aid agencies say they require US$485 million from June until the end of 2013 to help some three million people “to survive and to rebuild their lives”. IRIN has put together a list of some of the country’s most serious humanitarian issues:

Conflict: Over the past two years, inter-communal violence has destabilized Jonglei State, causing displacement. Battles between rebels led by David Yau Yau and the national Sudan People’s Liberation Army (SPLA) have also increased insecurity in the same state. In May, more than 100,000 people fled Jonglei’s Pibor County following clashes between the rebels and the SPLA.

Tension remains high in the disputed Abyei region, with tens of thousands still displaced by fighting in May 2011.

Access to conflict-affected populations remains a major challenge. Most recently, international medical charity Médecins Sans Frontières (MSF) reported on 8 July that some 20,000 people have been cut off from aid in Northern Bahr el Ghazal State after they fled violence in the disputed border area between Sudan and South Sudan.

Aid agencies also report being prevented by the government from accessing populations in need in Jonglei.

The integration into the SPLA of parts of some rebel movements - including Yau Yau’s and Peter Gadet’s South Sudan Liberation Army (SSLA) - saw a decline in militia activity in 2011 and 2012. Analysts say an amnesty issued to six militia leaders by President Salva Kiir in April could see further declines in militia-related violence, but for the moment, Yau Yau’s militia remains active, although elders in the region say peace talks are imminent.

Overall, internal conflict has displaced some 354,670 people, according to the UN Refugee Agency (UNHCR).

Returnees: Close to two million South Sudanese have returned home since the signing of the Comprehensive Peace Agreement in 2005, ahead of independence. According to the International Rescue Committee (IRC), many have returned to find their land occupied; IRC reports that “the legal framework and procedures for land allocation are unclear and poorly understood”. Few have valid identification documents, meaning they often miss out on vital services such as health and education programmes.

Nuba soldiers from the SPLA-N 9th division at a checkpoint in Jau, on the disputed border between Sudan and South Sudan 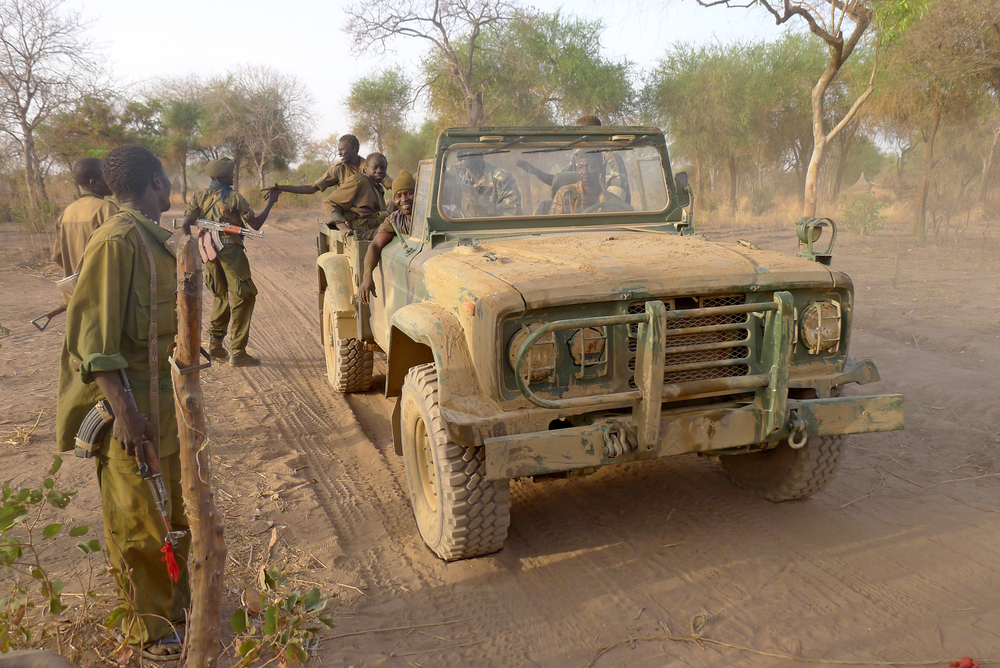 Hunger: Conflict, high food prices, and large numbers of returnees and internally displaced persons (IDPs) have led to a deterioration in the country’s food security. In the contested Abyei region, the mass return of IDPs following increased security has led to food security concerns, while the large number of returnees from Sudan has also put pressure on available food stocks.

According to the UN Food and Agriculture Agency (FAO), an estimated 1.15 million people are expected to face food shortages during the ongoing rainy season. In March, the UN World Food Programme (WFP) estimated that some 4.1 million people would be food insecure in 2013.

Empty coffers: In January 2012, South Sudan halted crude oil production, which accounts for almost all the country’s revenue, following a row with Sudan over transit fees. The shutdown lasted until April 2013, severely affecting the government’s ability to provide services, pay civil servants and support populations in need of humanitarian assistance. The first shipment of oil in 18 months left eastern Sudan’s Port Sudan for Asia on 30 June.

In June, Sudan threatened to shut down the oil pipeline running from South Sudan in response to South Sudan’s alleged support for the SPLM-N; South Sudan denies supporting the rebels.

Healthcare: South Sudan continues to have some of the world’s worst health indicators. For instance, the country has the world’s worst reported maternal mortality rate; fewer than 10 percent of women give birth with the help of trained medical professionals. Curable diseases such as malaria, measles, meningitis and respiratory infections kill thousands annually, while some 200,000 children under age five are at risk of being malnourished. Over 30 percent of the population has no access to safe water, and less than 15 percent has access to proper latrines, raising the risk of waterborne diseases. The country is also desperately short of trained health workers and health centres.

There has been some progress, however, with door-to-door polio immunization campaigns vaccinating more than 94 percent of children under five; the country has been polio-free for four years.

Human rights: The government has faced criticism over its poor human rights record, with accusations of abuse levelled at the SPLA during a civilian disarmament exercise in Jonglei in 2012. Poor prison conditions, widespread child and forced marriage, arbitrary detention and deteriorating press freedom are some of the main human rights concerns facing the country.