Read about what we achieved.
MEIKTILA

Inside a stadium now sheltering more than 2,000 displaced people in the central Myanmar town of Meiktila, residents appear dazed.

“How could this happen?” asked 65-year old Syed Darbi, who has lived her whole life in Meiktila, an otherwise quiet university town. “I can’t believe my own eyes. We lived in the same community. [It was] so friendly.”

“We are like refugees,” said 45-year old Ohnmar, sitting on the concrete floor of the stadium. After violence broke out on 20 March, the Muslim mother of two escaped a Buddhist mob only to see her home go up in flames. “How will I restart my life now?”

At least 40 people were killed and more than 12,000 displaced in the area, officials estimate, in what is being described as the worst sectarian violence to strike Myanmar since the 2012 unrest in western Rakhine State, where more than 120,000 Muslim Rohingya remain displaced.

On 20 March, a heated argument in a Meiktila gold shop between its Muslim owner and his Buddhists customers escalated, with crowds soon setting fire to businesses, religious buildings and houses. More than 150 homes and buildings were destroyed, including at least five mosques, local media reports say. 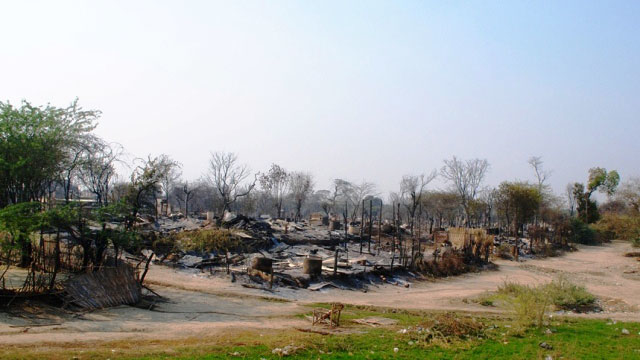 The violence continued for two days, spreading to neighbouring areas and prompting the government of President Thein Sein to declare a state of emergency in four townships - Meiktila, Thazi, Wandwin and Mahlaing - on 22 March. Troops were dispatched to the area.

“Due to the situation of devastating [sic] of peace and tranquility in Myeikhtilar District, Mandalay Division, the president’s office proclaims the State of Emergency (Act 144) for national security,” an announcement on the president’s website read.

Almost one week on, an uneasy calm has returned to the streets, but the local market remains closed and the atmosphere tense.

“We need to be alert so nobody sets our homes on fire,” said Aung Kyaw Soe, whose house was spared last week. “There are rumours that arson attacks can resume at any time.”

“Enough security forces should be in place for some period in order to prevent future clashes,” Win Htain, a parliamentarian for Meiktila Township, said.

According to the Ministry of Social Welfare, Relief and Resettlement (MoSWRR), 9,710 of the displaced are now living in six temporary locations - five schools and the local stadium - and 2,800 are staying in local monasteries. Others may have fled the area altogether.

The government has been providing food and water to the displaced through the MoSWRR, while the Myanmar Red Cross Society and the Ministry of Health have been providing health assistance, the UN Office for the Coordination of Humanitarian Affairs reported on 25 March.

The government established a relief management committee on 22 March. It is led by the deputy of the MoSWRR and includes local authorities, but aid workers say emergency assistance such as food, water and shelter is still needed.

To prevent outbreaks of communicable diseases, sanitation at each of the camps needs to be improved, said one government health worker, who asked not to be identified.

“So far, there are no serious diarrhoea outbreaks. There are just normal cases, such as injuries, and sickness, such as headache, backache and hypertension,” he said, noting that there were still not enough latrines in any of the camps.

At the stadium, there were only eight toilets for the more than 2,000 people, IRIN observed.

Under Sphere standards, which outline minimum standards in humanitarian response, the maximum number of people per latrine is 20.

“Many people who can’t wait their turns just defecate in the open space. How can they be shy now?” asked one Muslim man, pointing to dozens of residents queuing up outside the latrines.