Read about what we achieved.
ACCRA

At the launch of a Ghana-based Commission on the Impact of Drug-Trafficking on Governance, Security and Development in West Africa, its chair, former Nigerian President Olusegun Obasanjo, said the situation in Mali should serve as a “wake-up call” to the perils of allowing organized crime to escalate out of control.

He described the country’s north as a “den of drug trafficking, extremism and criminality”.

Several research groups have reported that traffickers have linked up with extremist groups in the Sahel region, who use the profits to purchase weapons and fund radical activities. Al-Qaeda in the Islamic Maghreb (AQIM) has partially funded its activities in northern Mali over the past decade through profits from drug and cigarette trafficking and hostage ransoms, according to a 2012 report by the African Center for Strategic Studies.

Analysts estimate around 60 tons of cocaine are trafficked through West Africa each year, while the UN Office on Drugs and Crime (UNODC) estimates 400kg of heroin was trafficked through the region in 2011. The trade brings in an estimated US$900 million per year to criminal networks, says UNODC.

Some 15 percent of the cigarettes smoked in the region are bought on the black market and trafficked through West Africa, according to UNODC. AQIM and to some extent splinter-group Movement for Oneness and Jihad in West Africa (MUJAO) have been taxing traffickers in return for safeguarding their passage.

“Organized criminal networks are deeply involved in the trafficking. Experience elsewhere in the world suggests that these groups will try to infiltrate political, security and financial institutions to secure their profits,” former UN Secretary-General Kofi Annan told the audience at the launch of the Commission in Ghana’s capital last week.

Over the last decade many West African states have made gains to consolidate peace and economic growth: the region is set to provide the US with 25 percent of its oil needs in 2015 - but drug-trafficking threatens this progress, said Annan.

Most of the cocaine is transported from South America to Europe, using air and sea routes; while opiates tend to come from Pakistan and Afghanistan.

Drugs are also increasingly being manufactured in the region. The police recently discovered methamphetamine laboratories in Nigeria, according to UNODC.

There are now as many as 2.3 million cocaine users in West and Central Africa, and methamphetamine and heroin use are on the rise, UNODC reported in 2012. “The evidence points to a growing problem of dependency that needs urgent attention in our region,” Obasanjo said.

General view of the main port of Bissau, capital city of Guinea-Bissau Feburary 2008. Machinery at port has broken down and costs of imports and exports are rising. 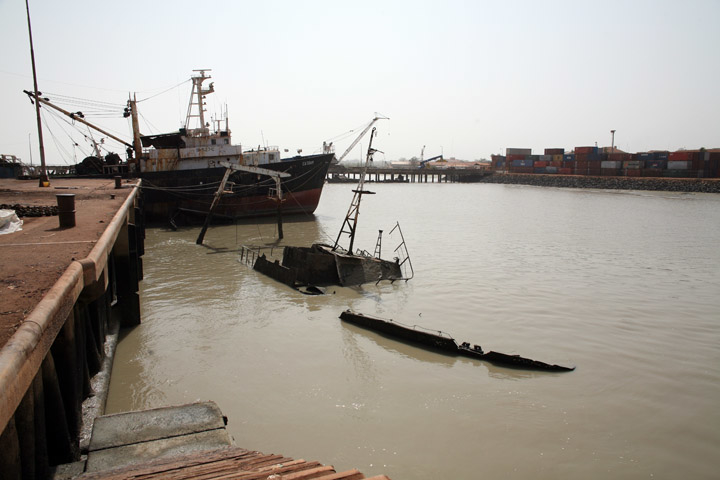 The 10-member Commission intends to raise awareness of the impact of the drug trade, advise political leaders, and develop policy recommendations to help leaders deal with drug-trafficking.

West Africa is an ideal environment for drug traffickers with its extensive porous borders, weak and easily corruptible institutions, and pre-existing criminal networks. In these poor nations it is easy to buy off low-paid and disenchanted officials and security personnel: “The police are bribed. Now, in a fairly poor African country, US$100 to a police constable is a lot of money. All he has to do is turn his eyes,” said Obasanjo.

He added that criminal networks can easily smuggle goods through the region, buying off officials and security personnel at borders, as they move through remote regions of the Sahel and the Sahara desert.

Criminal trafficking networks are international and very mobile, which makes it difficult to crack down on them, says the UNODC. Local and foreign criminal networks with access to massive resources work together to transport drugs through the region, adapting their operations in response to law enforcement efforts, according to an April 2012 joint report by the Economic Community of West African States (ECOWAS), the Center on International Cooperation, the Kofi Annan Foundation and the Kofi Annan International Peacekeeping Training Centre.

The government and security forces of Guinea-Bissau have already largely been taken over by drug trafficking networks, earning it the moniker of “narco-state.”

AQIM members reportedly met Colombian drug lords in Guinea-Bissau, according to a 2010 report by France-based research group Sahel Intelligence. While the trade allegedly continues to flourish in Guinea-Bissau, networks have also gradually moved along the coast and inland through the Sahel, Annan said. “We didn’t act early enough when the problem started in Guinea-Bissau. That was the entry point and it’s now spread along the coast - and through the Sahel to Europe and by ship and by plane,” Annan told reporters. Other initiatives are way to try to quell the impact of drug-trafficking in the region, including an ECOWAS plan to address the challenges of trafficking.

UNODC recently teamed up with the World Customs Organization to improve communications between police and airports.

The Commission will deliver a report and submit policy recommendations to regional leaders by the end of 2013.