Nearly 25,000 Mauritanian refugees who had sheltered in Senegal for two decades after fleeing violence in 1989, have returned home since 2008, but despite extensive efforts to resettle them in their original villages many lack ID papers and/or access to their old farmland.

Tens of thousands of black Mauritanians fled ethnic killings carried out by security forces in the early 1990s. Some fled to Mali but most to Senegal.

Aliou Moussa So is head of a returnee community of 73 families in PK6 village, 6km from Rosso in southern Mauritania near the Senegalese border. Like most of the returnees, he fled in 1989 and returned in 2008 when the UN Refugee Agency (UNHCR) started to repatriate refugees.

Most of the returnees were originally from PK6 though when they fled it was called “Wellingara”, loosely meaning “a nice place to visit” in their local language Peulhar.

Moussa So was angry when IRIN spoke to him about his problems. “I can’t recount all the problems I’ve had or we’d end up spending all night. I am sick of answering questions to you people in four-by-fours - that is all that anyone ever does here, they come, ask questions, and do nothing.”

PK6 is a scrappy village with half-built brick rooms scattered around a small shop with half a dozen sacks of cereal for sale, and a few corrugated iron shelters covered in rugs to protect them from the sun.

UNHCR provided the materials to returnees to build 150 brick shelters, but turned to corrugated iron shelters held up by wooden poles when their funding ran out.

The agency’s repatriation exercise ended in March 2012, having repatriated 24,536 refugees and resettled 14,000 in Senegal.

The problem for returnees in PK6 is they cannot access the old land they used to farm - some 14 hectares have been sold to someone else (they do not know who), and many of them cannot access the ID papers required to officially make their claim.

Moussa So has “complained to everyone” including the National Agency for Support and Resettlement of Refugees (ANAIR), the mayor of Nouakchott, the Ministry of Interior, “even the president of the republic”. Authorities from the Interior Ministry visited the village last year, but since then nothing has happened, he said.

“I am starting to lose hope,” said So. “We are exhausted. We are farmers. If we have no fields, how can we live?”

Many returnees face these same problems, said Oumar Diop, head of the National Forum for Human Rights (FONADH) in Rosso, which is partly funded by Oxfam and the European Union, and helps returnees try to access lost land.

“We have many cases of people who have difficulties reclaiming their land. We follow these cases at the district (`ouaddi’) level, and will even go up to the national ministry [of interior] level if necessary,” Diop explained.

FONADH is currently working on 16 cases but Diop is also exasperated. “Most cases just don’t have a solution,” he said, and out of 640 problem cases, just 115 have been resolved, he said.

According to ANAIR director Ndiwar Kane, the success rate is much higher, and 400 have been sorted out.

One of the problems says Kane, is that the land never belonged to the villagers in the first place: in the 1980s most farmland was owned by the state. After the villagers left, the land was redistributed among other villagers, mainly by village chiefs.

Since then, private land ownership rights have developed in Mauritania, and businessmen and officials have started to purchase the land - many of them living in Nouakchott or other towns, and managing it from afar. “A lot of the deals that took place were quite murky,” said Kane, “We are not used to individual land ownership here.”

In a bid to diminish tensions, in some cases the government and ANAIR tried to strike deals with locals to return part of the land to the returnees. But ANAIR has no legal right to intervene in land rights issues - and neither does UNHCR. Instead, it is the job of the civil affairs bureau, which is in charge of registering people’s status, and the Ministry of Interior, says the government.

“We can only try to help resolve small problems,” said Kane. In 2008 ANAIR, UNHCR and others presented a report listing returnees’ main problems and priorities for district and regional chiefs and for the Ministry of the Interior. Four years on, the principal problems remain.

Hard to get an ID card

Getting hold of identification cards has been a process fraught with difficulty Kane agreed, but the same is true for many Mauritanians he says - it is a national issue.

Returnees who had been registered as refugees by UNCHR were registered on the Mauritanian side by the Etat Civile (civil authorities) who gave them a Formulaire de Rapatriement Volontaire (VRF) which allowed them to move around freely. A deal was struck with the civil administration, whereby these two forms would suffice to attain an ID card.

The tripartite repatriation agreement signed by Senegal, Mauritania and UNHCR in November 2007 stated that repatriated Mauritanians should have their citizenship papers within three months of their arrival.

Oumar Diop, who works at the Clinique Juridique in Rosso, shows IRIN the refugee papers of Mauritanian returnees (from Senegal) who have still not been able to access ID cards 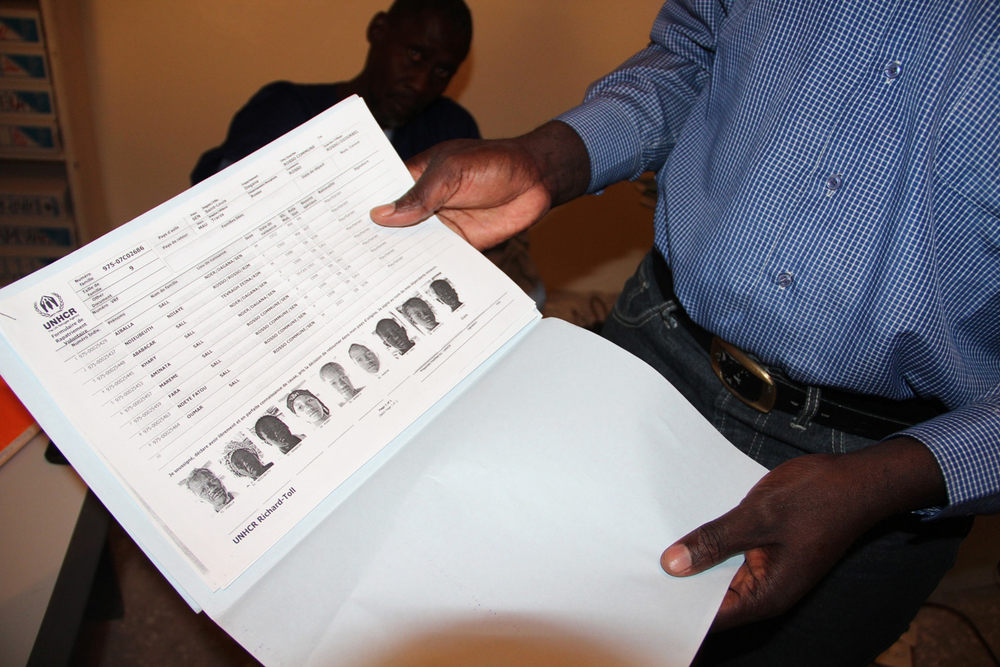 But hundreds of returnees still do not have their cards, says Diop. Without ID cards it is difficult to register for health care, or to enrol children in school in Mauritania. Even travel can be difficult in a country littered with military checkpoints.

The problem lies at the level of the civil administration, said Kane, which lacks the resources to adequately process returnee identification, and has not been restructured as advised by others. Hundreds of cases remain blocked in their systems, says Diop.

A minority of returnees - those included in the first convoy - returned to Mauritania without having the correct birth registration records for their children born in Senegal. A solution to this was found during meetings between ANAIR, UNHCR and the Senegalese authorities, though he is unaware of the outcome of individual cases.

Returnees say the civil authorities choose not to address their problems.

One refugee official said the problem also lay with the returnees: you have to pay 1,000 ouguiya (US$3.40) to pick up your identity card, a sum that many returnees refuse to pay.

The residents of PK6 have not been abandoned said Kane. ANAIR provided the village with a water source; provided materials to the returnee association to set up a community shop to sell grains at reduced prices and gave them cooking gas to sell. It gave the women’s association a grinding machine so they would not have to walk long distances to purchase flour; helped them set up a dyeing business; and provided rudimentary fencing to protect their market gardens from being eaten by animals and pests.

ANAIR has distributed 91 such grinding machines to returnee villages as part of wider income-generating efforts across many of the 124 villages to which ex-refugees have returned.

PK6 villagers have access to 18 hectares of land, he said, six of which are for market gardening.

Moussa So recognizes the help ANAIR has given. “It has certainly helped us. But when we complained about our papers, we got cooking gas,” he said, pointing to a heap of cooking gas canisters in the corner of his one-room house.

While returnees do have small market gardens, they cannot access their land to grow rice, said Moussa So. Returnees get by mainly on small trade or dyeing clothes.

For UNHCR’s reporting officer in Nouakchott, Elise Villechalane, the fact that 80 percent of returnees stayed in the regions to which they had returned, is a sign of success. UNHCR was in charge of registering and repatriating over 24,000 people across 124 villages. “It wasn’t an easy operation,” she said.

Returnees IRIN spoke to do not want to move on - they are home at last - but they do want their old lives back. “We used to farm. We used to get by. Now we rely on outside help,” said So, using the Peulhar expression `boofni’, which loosely translated means “How can an empty sack stand up?”