Living with the LRA: The Juba Peace Initiative

Progress at the peace talks between the Ugandan government and the rebel Lord’s Resistance Army (LRA) depends on skillful mediation, willingness among the parties to reach a deal, credible monitoring, sound technical advice and a range of other diplomatic niceties and military finesse.

And pencils. Plus helicopter flights.

"Like everything in Sudan, it's a logistics operation … everything is expensive," said an official close to the process.

A low-key but hectic operation has been running since last year, booking flights, paying hotel bills, telephone bills and per diems, and shuttling VIPs to and from remote locations.

An ad hoc funding mechanism backed by several donors, the Juba Initiative Project has disbursed most of its original US$5 million over seven months – due to a hiatus in the talks early in 2007, the money has lasted longer than the planned three months. A new budget is being prepared, and monthly costs will be similar, sources close to the process say.

The talks are getting "bigger and bigger" and more professional, the official said, with teams from the LRA and Ugandan government joined by legal, security and other advisers as well as representatives of the Government of Southern Sudan, whose Vice-President, Riek Machar, is chief mediator.

The Cessation of Hostilities Monitoring Team, set up after the signing of the Cessation of Hostilities Agreement in August 2006, includes the two parties, the Southern Sudanese mediators, as well as African Union-mandated military monitors from five countries. It is mandated to investigate on-the-ground allegations of violations or clashes, which could occur over a wide swathe of Southern Sudan. 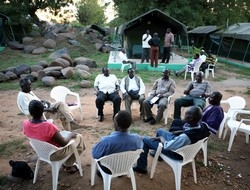 Manoocher Deghati/IRIN
The LRA delegation to the peace talks in Juba, Southern Sudan

That means about 50 people need accommodation and other logistical support from stationery to air transport.

In Juba, a night in a well-equipped tent with access to generator power, food and washing facilities costs well over $100. In the town, mains power and water are intermittent at best, and users of the two mobile phone networks (one using a Sudanese, the other a Ugandan country code) can rarely complete a call on first attempt or sometimes for hours.

A flood of UN and other aid workers, government officials and business people has made prices rocket, spawned dozens of bars and restaurants and made Juba what one donor official called a "cowboy town".

The LRA's leadership is staying away from Juba for security reasons. Reaching their Ri-Kwangba site on the border with the Democratic Republic of Congo – 90 minutes by helicopter from Juba - where major LRA decisions are made - involves driving significant stretches on flooded roads at this time of year, another well-placed source said.

A new airstrip will be levelled at Nabanga, near Ri-Kwangba, allowing cheaper fixed-wing air access, while road repairs are planned to make it more practical to reach Ri-Kwangba, with supplies and personnel.

The total costs are higher than the Juba Initiative funding, with some costs absorbed by the GOSS. The UN peace support mission, UNMIS, has also contributed, providing Mi-8 helicopter flights to and from the remote base where the LRA leadership stays – the commercial cost would be thousands of dollars per flying hour, well-informed sources say.

Donors have recognised the need to professionally manage the book keeping and other practicalities. An international financial services firm is likely to be contracted to handle logistics, procurement and administrative issues for the Juba Initiative Project, UN officials say.

“We have to ensure we don't make it a business...and they sit there for the next three years.”

As the LRA talks re-start, another complex mediation may begin as early as July in Juba. One international donor official told IRIN that significant international hopes were pinned on the Sudan People’s Liberation Movement (SPLM) offer to bring the various Darfur factions to a more coordinated negotiating stance, and that the SPLM and GOSS were "the best proxy … they can really do something".

In the meantime, at the LRA talks, a careful balance has to be struck. Mediators and key players need basic amenities wherever they have to be.

But there is a risk. One observer told IRIN, "We have to ensure we don't make it a business … and they sit there for the next three years."