RI-KWANGBA, 1 June 2007 (IRIN) - Every evening, a line of young girls with yellow jerry cans on their heads and babies on their backs walks to the camp water point on the edge of the forest. They pump water under the protective eye of the young men with guns, and shy away from visitors and outsiders.

These are the girls of the Lord’s Resistance Army, at the LRA headquarters on the Sudan-Democratic Republic of Congo (DRC) border.

“I am not allowed a wife until I am 18,” explains Sergeant Anyor, 16, who says he has been in the LRA since he was eight. He asks for a small bar of soap as a present for the wife of his friend, whose compound he shares. There is no casual sex allowed in the camp; marriage is strictly regulated by the leaders. Young men such as Anyor stay in a compound run by the wives of senior soldiers and the wives use ‘recruits’ – young boys – to mind the children and carry out domestic chores.

Joseph Kony, the spiritual leader of the LRA, is said to have many wives.

Anyor and his friends are guarding the LRA camp. They are mid-level fighters and act as runners for their seniors. Sitting on termite mounds and logs, wedded to their over-sized weapons, they hunt forest birds with sling shots, and watch the recruits head into the forest in small scouting parties. Small boys carry weapons for their group leader, and bring back sacks of wild fruit and mangoes to the camp.

The young soldiers are overcome with curiosity for visitors but they accept nothing without permission from the commanders. Packets of chewing gum slide into a back pocket. Cigarettes are strictly forbidden. Alcohol is evil. Conversation is careful. But at heart they are still teenagers – before long, they are asking about cars, girls, clothes and the world outside. 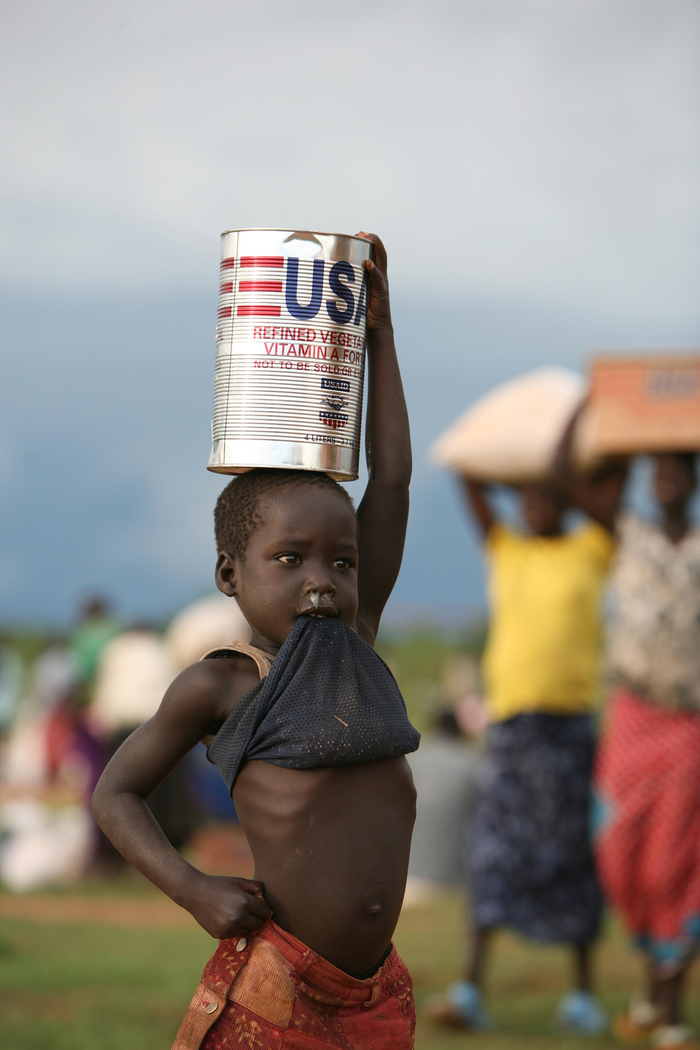 “I want to drive a car, to ride in a vehicle, and learn about machines – I want to go to school,” says Anyor. He remembers he has a sister called Lucy at home in Gulu, northern Uganda. He has very little to say about his childhood in the bush but he insists he joined voluntarily at eight years old “to fight for my motherland, against all the bad things [Uganda’s President Yoweri] Museveni is doing”. A young soldier says he was kidnapped from a bus station in Nairobi, Kenya, but has decided to stay with the LRA. “I have no transport or money to go back,” he says.

Children and young adults have become the fighting core and social backbone of a movement that is notorious for abducting and killing children, and using murderous rituals to turn family and friends against each other. Humanitarian agencies and human rights organisations estimate as many as 20,000 children have been abducted or killed during the conflict.

But the children and young adults in the camp on the Sudan-DRC border have become completely absorbed into the LRA system. Unlike former abductees in northern Uganda, who have nightmare tales of escape and fear, or children who have been murdered and tortured in the bush, these children can kill for the cultish rebels.

Five of the LRA leaders – Joseph Kony, Vincent Otti, Okot Odiambo, Dominic Ongwen and Raska Lukwiya - have been indicted by the International Criminal Court for crimes against humanity, including abduction, sexual enslavement, mutilations and killings. Lukwiya was reported killed in 2006.

In an interview with IRIN in Ri-Kwangba in April, Vincent Otti said the young girls and boys of the LRA would “go back home” if a peace deal were achieved.

But he has made it clear that LRA participation depends on the ICC lifting the warrants of arrest against the leaders. “If we do not come out [of the bush], it means that peace will not return to Uganda. That will affect all the people of Uganda.”

In April, when international mediators and observers flew to the border near the LRA headquarters, Kony and Otti had abandoned camouflage and appeared in suits for the first time. This was taken as a means to distance themselves from their notorious image and present themselves as serious politicians and liberation fighters. During the talks, the second in command, Vincent Otti, took a very central role as strategist and negotiator. A former soldier and now in his 50s, Otti is referred to as ‘the boss’ within the movement. He has been charged, among other things, with massacring 300 people in his own village. The scale of atrocities may mean he will be unable to go back to northern Uganda even if the ICC indictments are suspended, observers say. One of the challenges of peace and justice may be finding a country to accommodate Otti.

Since the start of the Juba peace initiative, the relationship between Kony and Otti has generated speculation about the LRA leadership. One military source in Southern Sudan said that while Kony was “straightforward” to deal with, Otti was likely to be obstructive and unpredictable – but it was “always necessary to get his agreement”. So how much of a leading role does Otti play?