More than 3.5 million of the 6.5 million people who have fled Russia’s invasion have entered the EU at the Poland-Ukraine border, mainly to open arms and a hot meal. This situation stands in stark contrast to the reception for refugees from the Middle East, Africa, and South Asia a couple of hundred kilometres to the north, in Poland’s densely forested northeast.

Thousands of soldiers and police continue to patrol the border with Belarus as construction on a 350-million-euro wall intended to keep out asylum seekers and migrants nears completion. Meanwhile, aid volunteers are bracing for an uptick in attempted crossings during the warm summer months while contending with increasingly hostile treatment from authorities.

“For the people who flee from Ukraine, when you go to the border and put them in your car and your home, you are a hero; when you do the same for someone who passed the Belarusian border, you are a criminal. This is something we cannot understand,” said Maria Radwańska, the 39-year-old coordinator of Warsaw’s Club of Catholic Intelligentsia (KIK), a Polish civil society organisation that operates an aid station near the Poland-Belarus border.

A geopolitical showdown last year led to a sharp increase in the number of asylum seekers and migrants attempting to enter the EU from Belarus. The situation turned into a humanitarian crisis as EU member states Lithuania, Latvia, and Poland deployed their armies and police and pushed people back from their borders, while Belarusian security forces tried to push them back into the EU. Thousands ended up stuck in the forest – facing abuse from both sides – and at least 21 died.

During the harsh winter months, the crisis largely slid from view as the number of people crossing declined and attention shifted to focus on Russia’s invasion of Ukraine, which began at the end of February.

However, volunteers The New Humanitarian spoke to during a recent visit to the Poland-Belarus border said they are seeing a fresh uptick in asylum seekers and migrants attempting to cross. 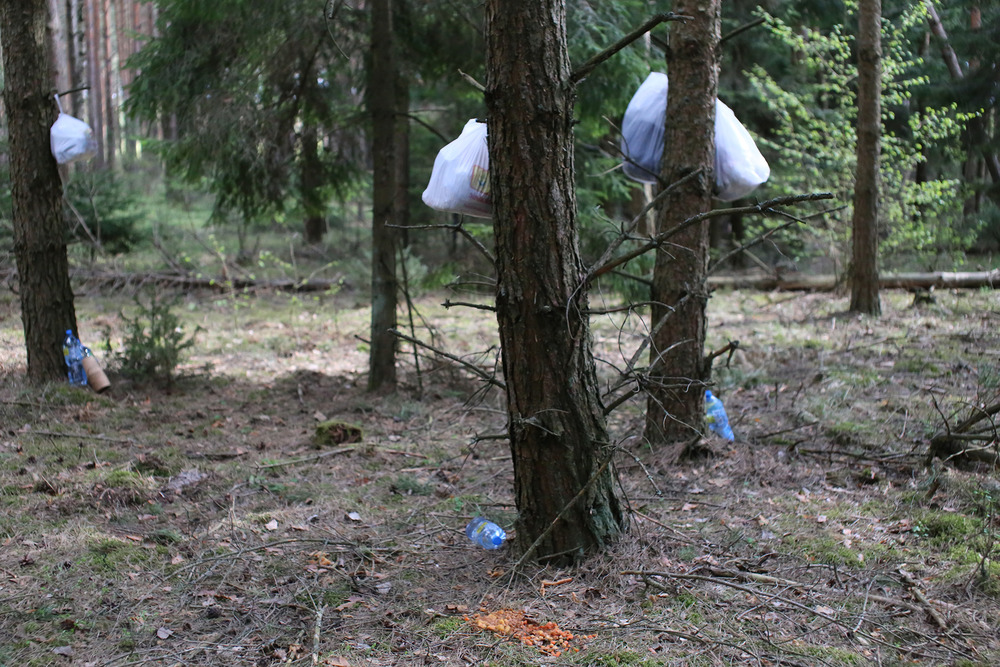 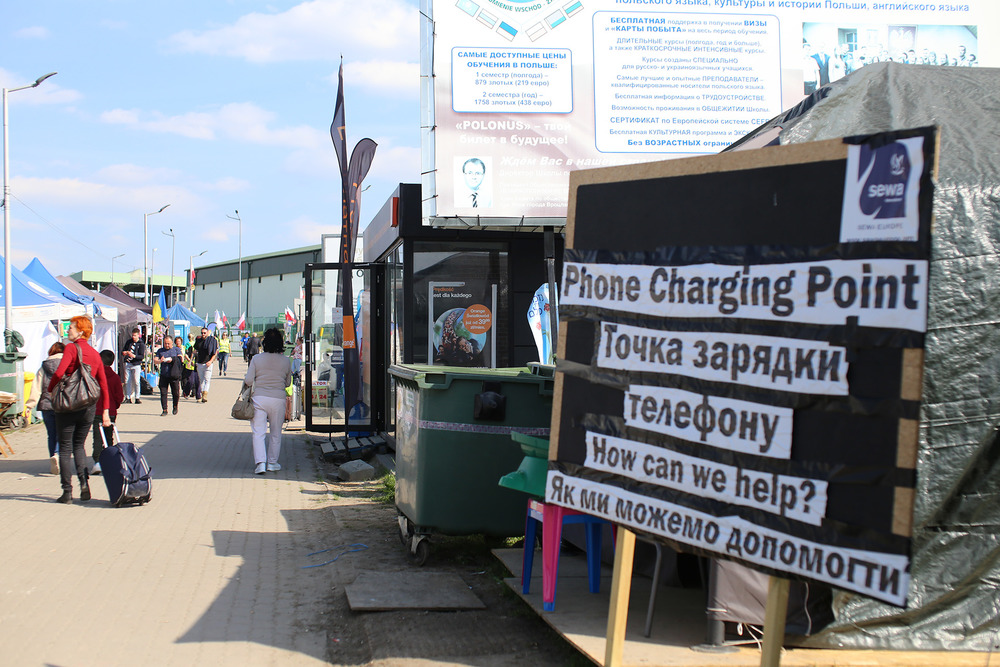 First photo: Along Poland's border with Belarus, assistance is provided by a smattering of volunteers who leave bags containing food and other essential items in a heavily restricted "emergency zone". Second photo: At Poland's Medyka border crossing with Ukraine, refugees are greeted with an array of support, including phone charging stations. By contrast, at the Poland-Belarus border, Polish border guards have been accused of breaking the cell phones of asylum seekers and migrants. (Hanna Davis/TNH)

Grupa Granica, a network of Polish NGOs and activists providing humanitarian assistance to people along the border, said they received between 120 and 200 calls for help per week during March and April – a significant increase – and that the number of people attempting to enter Poland has at times surpassed what they saw last autumn.

The increase coincides with warmer temperatures as well as with Belarus expelling almost 700 people from a makeshift camp opened to house them during the winter in Bruzgi, a town near the border.

Many of those who remained in Belarus – and who are now attempting to enter Poland – are among the most vulnerable caught up in the crisis. They include people with disabilities and chronic diseases as well as families with children, even mothers with babies born in Belarus over the winter, according to Anna Alboth, from the NGO Minority Rights Group, who also volunteers with Grupa Granica.

Others attempting to cross now have recently entered Belarus from Russia – including new arrivals from countries in the Middle East, such as Iraq, Yemen, and Syria, and foreigners who had been living in Russia but are now attempting to leave due to the impact of sanctions and fears of a widening conflict.

“This route [from Belarus to Poland], it’s already open; it’s already on the map for potential migrants. This is not going to stop any time soon,” Monika Matus, a spokesperson for Grupa Granica, told The New Humanitarian.

In early March, shortly after Russia began its full-scale invasion of Ukraine, travel agencies in Iraq began advertising packages to fly to Moscow and then travel by car to the Belarusian capital, Minsk, according to an Iraqi Kurdish woman The New Humanitarian spoke to.

The woman – who requested anonymity, and whose account was backed up by other asylum seekers and activists The New Humanitarian spoke to – had flown to Belarus and tried to enter Poland in November but returned to Iraqi Kurdistan in December after becoming stuck. 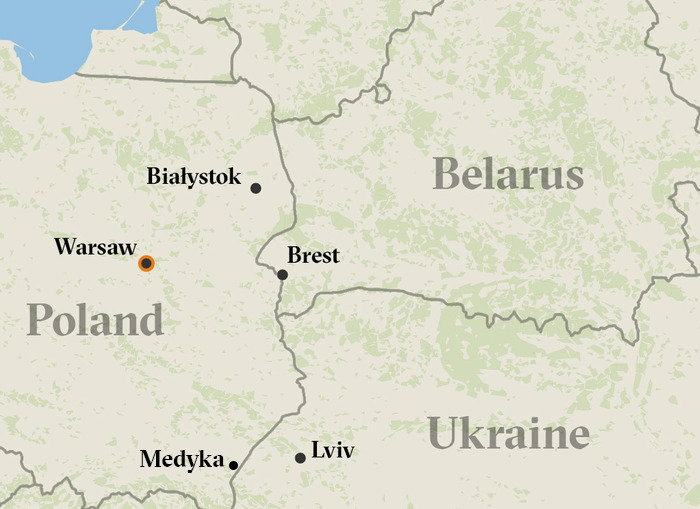 The route via Moscow – which some travel agencies in Iraq are charging around $2,800 per person for – circumvents restrictions the EU persuaded multiple airlines to place on Iraqi, Syrian, and Yemeni passengers boarding flights to Minsk from hubs such as Turkey and Dubai last November.

But once people are in Belarus, crossing the border into Poland is still no easy feat.

“We were treated like animals,” said Arez Aso Ahmed, a 23-year-old Iraqi Kurd who crossed the Polish-Belarusian border in late March, “It did not feel like we were human beings.”

Ahmed, who has since reached Germany and applied for asylum, spent four months in the makeshift camp in Bruzgi after he failed to enter Poland last October. When he and others tried to enter Poland again in March, he said Polish border guards broke their cell phones and shouted all night so they couldn’t sleep, as they waited by a fence hoping to cross.

Human rights organisations have documented numerous cases of Polish border guards breaking people’s cell phones before pushing them back to Belarus, leaving them stranded in the border region without the ability to call for help or use navigation apps.

Anna Michalska, a spokesperson for Poland’s Border Guards, told The New Humanitarian that “Polish border guards allow, promote, and also personally help all the people who need support [in the border region]” and that the “border guards take applications from any immigrants who want to apply for asylum in Poland”.

However, several human rights organisations have documented Polish security forces pushing asylum seekers and migrants back to Belarus, despite pushbacks being prohibited under international law. An April report from Amnesty International recorded cases of people who had told Polish authorities they wanted to apply for asylum being expelled back to Belarus as well as cases of people attempting to cross the border 20 to 30 times only to be pushed back, sometimes violently.

Khaled Mohebi, a 27-year-old from Afghanistan, told The New Humanitarian that when the Polish border guards pushed him back to Belarus when he first attempted to cross last October, Belarusian security forces arrested him, set dogs on him, tortured him with electric shocks, and beat him with their guns. Mohebi has since made it to Germany.

Ahmed, who also alleged that he was abused by Belarusian security forces, said he was afraid of being returned from Poland to Belarus, which is one reason he quickly left for Germany after making it across the border. “If we ask [Belarusian security forces at the border] to go back to Belarus, they will definitely kill us,” he said, expressing a fear stemming from the abuse he experienced.

Construction of Poland’s border wall – which will cover 186 kilometres, or about half of the country’s border with Belarus – is scheduled to be completed in June, according to Michalska, the Polish Border Guards’ spokesperson.

The volunteers The New Humanitarian spoke to doubted the wall would deter people from attempting to reach Poland, but they did worry that it would make the crossing more dangerous – and potentially deadly.

Like border walls elsewhere, the wall in Poland is being built where it is easiest to cross, meaning those who attempt the journey once it is complete will be forced to take longer routes through more difficult terrain.

Meanwhile, volunteers in the border region are already shorthanded. “There are fewer volunteers to help, but there is just as much work as before,” Mariusz Kurnyta, a 35-year-old volunteer, told The New Humanitarian.

Many of the volunteers who were active at the height of the crisis last year have turned their attention to Poland’s border with Ukraine, drifted away, or become deterred by the Polish government’s growing crackdown on their activities at the Poland-Belarus border.

“The army is much meaner and more focused on disturbing our work,” said Alboth, from Minority Rights Group, comparing the situation to last year.

“We have the feeling that, first, there are more [soldiers and border guards], but second, that they are more aggressive and active to find us,” Radwańska added.

A state of emergency declared last year, which established a three-kilometre zone along the border that NGOs and journalists are barred from entering, remains in effect; and KIK’s aid station has been raided twice recently by Polish police. One of the group’s volunteers, 20-year-old Weronika Klemba, was arrested on 25 March in the off-limits zone and has been charged with organising an illegal border crossing, according to Radwańska. If convicted, Klemba faces up to eight years in prison.

“We volunteers shouldn’t be doing this. The fact that we are means the system is broken.”

On 23 March, Polish border guards arrested four volunteers who were helping a family with small children at the border. The volunteers were detained for three days and are also facing up to eight years in prison.

Kurnyta said he was also fined 5,000 Polish zloty (about $1,160) after being caught in the three-kilometre zone in March providing humanitarian support to asylum seekers and migrants in the forest.

‘We feel that there is no one to call’

“We [volunteers] shouldn’t be doing this,” Helena Zoltowska, another volunteer at the KIK aid station, told The New Humanitarian. “The fact that we are means the system is broken.”

The humanitarian response should be the responsibility of organisations like the UN’s refugee agency (UNHCR) and the Red Cross, but the Polish government has barred international organisations and NGOs from entering the border zone, Zoltowska added. Meanwhile, with all the attention focused on Poland’s border with Ukraine, fewer journalists and politicians are shedding light on what is happening in the forest.

“We feel that there is no one to call,” Zoltowska said.

If the number of people crossing from Belarus to Poland does increase in the coming months, the only lifeline for those who end up stuck in the forest will be the dwindling number of volunteers.

“[Asylum seekers and migrants] are never, ever, prepared to go to the forest,” Ewa Dymek, one 34-year-old volunteer, told The New Humanitarian. “Often, they think they will die in the forest, and that they are alone; that the world forgot about them.”