Health
Coronavirus
Politics and Economics
Listen to this article:
BAGHDAD

After a deadly fire tore through a Baghdad hospital this week, killing at least 82 people and injuring more than 100, questions linger about the corruption, underfunding, and mismanagement that have long plagued Iraq’s public healthcare system.

On the first floor of the Ibn al-Khatib hospital, in the south of the Iraqi capital, the smell of burnt plastic and flesh remains, sandals lie abandoned on the steps, and the light fixtures on the ceiling above have melted.

Dozens of oxygen cylinders, some charred, remain in the intensive care unit. An explosion in one of them is said to have been the cause of the blaze, although an official investigation is ongoing.

On the night of the fire, 24 April, the unit was packed with COVID-19 patients – some of the worst cases in a deadly wave that is coursing through Iraq. The country has seen more than a million total infections and 15,348 deaths, with a sharp rise starting in late February.

“One of the patients’ relatives touched one of the cylinders while his hand was wet with an oily substance, and the canister was leaking…[That] sparked the first fire,” Qaseir Hassan, deputy director of the hospital, told The New Humanitarian, pointing to where he believes it all began.

A blackened gurney sits in front of the cylinder, covered with part of a half-burned t-shirt. Hassan, who was not in the room at the moment of the first blast, said he ran to help as soon as he could: “We went to get the fire extinguishers, but we didn’t make it in time. Then the others started to explode, one after another.”

The ICU was treating at least 21 patients that night, around four times its capacity, Hassan said. That’s not counting the number of relatives who were packed in alongside them. Official numbers say 28 total coronavirus patients were among the dead.

“You know how it works,” he said. “If you don’t allow a person to be with their loved one, they say they’ll speak to someone high up, and they’ll end up getting what they want anyway.”

This comment points to larger questions that have been brought into the spotlight by the fire.

Iraq’s public healthcare system has long received little money from the government, and corruption is said to be a problem, even on a small scale like patient admittance.

“In hospitals, we are supposed to follow safety guidelines,” Dr Abdulameer Mohsin Hussein, president of the Iraq Medical Association, told The New Humanitarian. “But the government can’t control everything, so the approach to applying the rules is lax.”

Hussein said low-level graft is common and can lead to corner-cutting, eventually sometimes to disaster. When it’s time to build a new hospital or open a new department, there are “always” problems, he said: “It’s never done in the proper way.”

Immediately after the fire, officials acknowledged what many were thinking: The tragedy is part of a wider problem. Prime Minister Mustafa al-Kadhimi suspended the health minister, ordered an investigation, and called the fire “a crime.”

President Barham Salih tweeted that the fire was the “result of the accumulated destruction of state institutions due to corruption and mismanagement”.

But these statements may not mean much to a public that has been dealing with poorly funded state infrastructure for decades. A relatively small portion of Iraq’s budget goes to its public healthcare system, while government rules for procuring medications are complicated and often force medical professionals and individuals to bend the rules to get what they need. 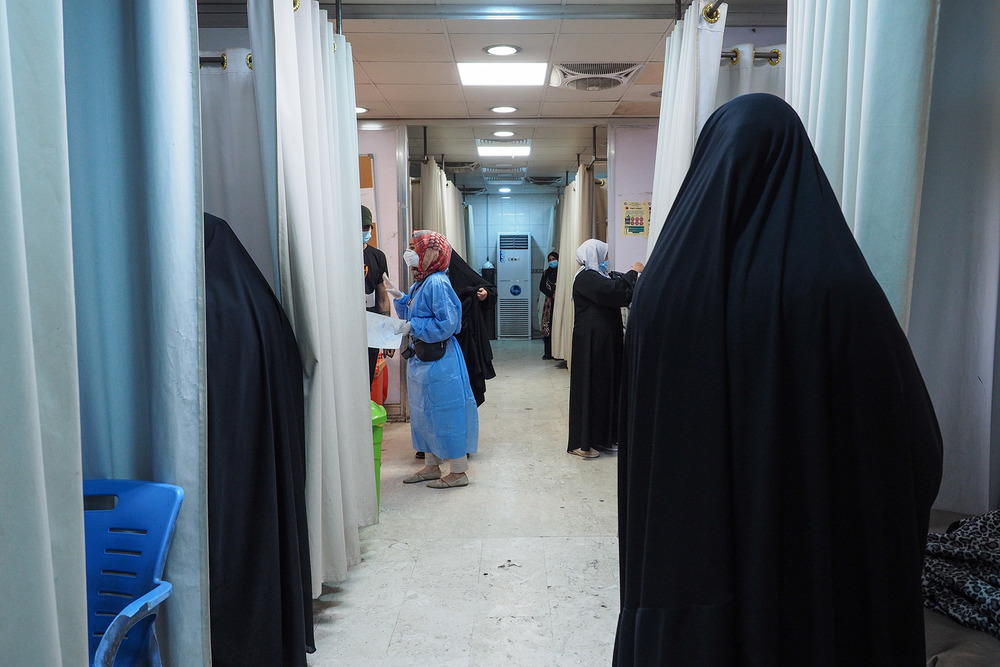 Stefano Fasano/TNH
COVID-19 patients wait in the emergency room for a bed to open up in the intensive care unit at Baghdad's al-Kindi hospital.

Doctors and nurses have been leaving the country in droves for years, and those who remain have faced rising violence during the COVID-19 pandemic.

Those who can afford it seek treatment at private institutions or abroad, but that’s out of the question for most Iraqis, and poverty is rising. Complaints about poor healthcare and other services were one of the drivers of a protest movement that began in October 2019, and brought many Iraqis out onto the streets. During the demonstrations, which were met by a violent crackdown, some Iraqis refused to enter ambulances or public hospitals, fearing the presence of security forces.

While the protests, COVID-19, and now the fire are calling attention to Iraq’s failure to invest in public infrastructure, Renad Mansour, senior research fellow and project director of the Iraq Initiative at the Chatham House think tank, said it’s unfortunately nothing new. Political parties and officials have long managed to extract money from the state, but it doesn’t trickle down.

“They have taken so much money from the ministries without actually ensuring that the infrastructure can do its job,” he explained. “This is why so many Iraqis do not trust either the health system or the leadership.”

Mansour doubted the suspension of the minister would make much difference. “The health minister isn’t the only man making decisions. In fact, he has been put there by higher political power to serve certain interests,” he said. “He can be removed, but that doesn’t come close to changing a rotten political system that is not able to offer the most basic services to its people.”

The fire at Ibn al-Khatib has made providing those services even more difficult, at a critical time: COVID-19 deaths and infections are on the rise, with prevention measures uneven and people gathering more than usual for the Muslim holy month of Ramadan.

In late March, Iraq received 336,000 doses of the AstraZeneca vaccine via COVAX, followed in early April by a reported 50,000 doses of the Pfizer-BioNTech vaccine. In addition, the government says it has received 250,000 doses of the Chinese-made Sinopharm jab. So far, around 300,000 people are believed to have had one dose, out of a population of around 40 million.

“This will have an impact on the healthcare system as a whole, because we have lost one of the main hospitals working in the pandemic,” said Dr Aurélie Godard, who works in Baghdad with the medical NGO Médecins Sans Frontières. 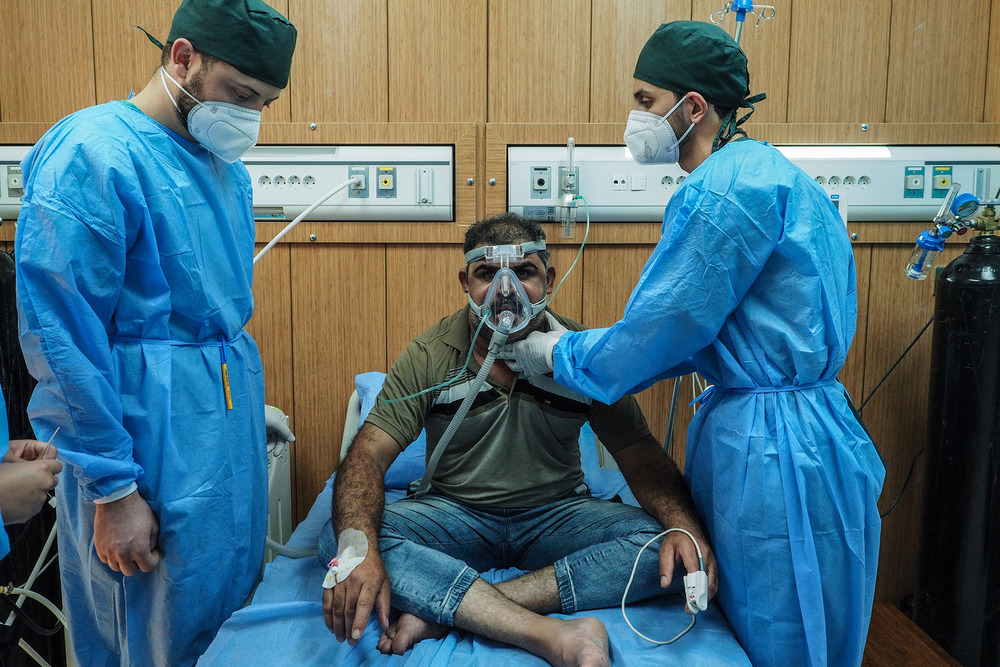 Stefano Fasano/TNH
Kadhim Rahim Hussein, who has COVID-19, is assisted by staff at Baghdad's al-Kindi hospital.

Alongside Iraq’s Ministry of Health, MSF is currently running a COVID-19 unit at Baghdad’s al-Kindi hospital. “Our beds are full in the ICU, the ER, and the triage,” said Mahmoud Mohammed Faraj, a nurse in the ward. “Patients who can’t get a bed on the ward die because they didn’t have access to medication and oxygen.”

At al-Kindi, there is not enough space for everyone in the COVID-focused ICU, patients have to wait days for a spot, and staff are forced into making difficult decisions. “If there are five patients waiting for a bed and I have only one, I have to choose,” said Godard. She goes by “who is most likely to benefit from it; who is younger; who was previously healthier”.

Some of the sick prefer to stay at home, avoiding hospitals altogether, said Godard and Ibn al-Khatib’s deputy director Hassan. Their relatives bring oxygen canisters home, and treat them as best they can.

For now, despite promises from politicians to look into what caused the fire and who is to blame, those who were at Ibn al-Khatib last weekend are left with more questions than answers.

“If there are five patients waiting for a bed and I have only one, I have to choose.”

Samar Ahdan, who works as a chef at the hospital, had been visiting relatives who were in the ICU with severe cases of COVID-19 on the night of the fire. He was on his way out when the ward filled with black smoke and flames. He described trying to help patients escape, then running to prevent even further disaster: “I went with others to close the central oxygen distribution system, because if that caught fire the whole hospital would have exploded.”

In the wake of the fire, some criticised the actions of hospital workers. But Ahdan places the blame with the Ministry of Health and the hospital’s management. Hassan said the extra oxygen was on hand because the central distribution system wasn’t enough for all the patients, but Ahdan wasn’t buying this explanation. “Why were there so many oxygen canisters in the ward, if we have a functioning system of distribution?” he asked.

“I saw the cylinder that exploded first; it was rusty,” he continued. “How could anyone in their right mind let that happen?”

With reporting support from Salam Zaidi.