While health experts scramble to understand the implications of Omicron, and countries around the world impose hasty travel restrictions, the emergence of the new variant could hardly have come at a worse time for South Africa’s vaccination campaign amid a worrisome fourth wave of COVID-19.

The South African government had set a goal of fully immunising 70 percent of adults by the end of the year, but has so far managed to get both jabs in the arms of only 36 percent – just over 16 million people. It has acknowledged it will miss its long-promised target.

In a national televised address on 28 November, days after news of Omicron broke, President Cyril Ramaphosa warned that the government was considering imposing vaccine mandates to re-energise its campaign. Otherwise, he said, “we will continue to be vulnerable to new variants and will continue to suffer new waves of infection”.

The emergence of new strains is a significant concern in South Africa, where around 90,000 people have died from COVID-19, and where growing evidence points to the country’s high HIV-prevalence rate as amplifying the risk of coronavirus mutations.

COVID-infected, immuno-compromised patients can struggle to clear the virus from their bodies and over time can become “factories for variants”, noted University of KwaZulu-Natal geneticist, professor Tulio de Oliveira, part of the team of scientists that identified Omicron.

Declared a variant of concern by the World Health Organization (WHO) on 26 November, Omicron has so far appeared in some 20 countries. Scientists are racing to understand the threat posed by the heavily mutated coronavirus – whether it’s more transmissible, virulent, and better able to dodge current vaccines than previous strains.

So far, there’s no firm evidence it is more dangerous. The initial Omicron infections that surfaced this month in Gauteng, South Africa’s economic hub, have not been severe – but the cases were among young people, who tend to have mild COVID-19 symptoms anyway.

Although rates of hospitalisation are rising fast in Gauteng, this was predicted as South Africa’s fourth COVID-19 wave arrives. The WHO noted that the surge isn’t necessarily the result of “specific infection with Omicron”.

South Africa’s vaccination programme got off to a shaky start in March over the initial difficulty the government faced – like other developing countries – in procuring enough serum.

The pipeline is now more secure, but the rate of vaccinations is again stuttering, currently reaching less than half of its weekly target.

It’s not that South Africans oppose immunisation: 72 percent of people say they are willing to receive a vaccination, or have done so already, according to a mid-year survey by the University of Johannesburg and the Human Sciences Research Council.

That’s a higher rate than many European countries, and well ahead of the United States. 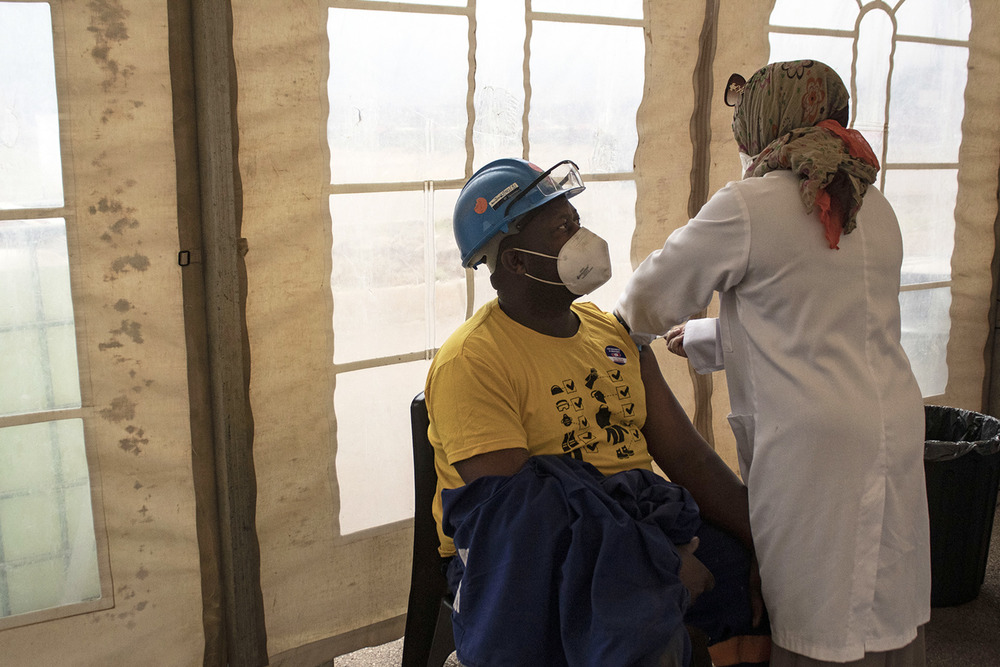 Class – and to an extent race – help explain some of the mismatch between vaccine intention and action. Acceptance of inoculation is far more pronounced among Black South Africans, but white citizens are more likely to have been jabbed.

Part of the reason revolves around ease of access to vaccination sites, the survey points out. Medical aid and private car ownership – which skew disproportionately towards white South Africans – allow a much more convenient vaccine experience than queues at public clinics, reliance on public transport, and the chance of being docked half-a-day’s pay.

What motivates people to get vaccinated is a complicated mix of factors, according to Peter Benjamin of the non-profit Health Enabled, which works with the government on understanding vaccine demand.

“It’s firstly their personal views,” Benjamin told The New Humanitarian. “Secondly, its social norms [what the community believes] … and then [if they want to get jabbed] they have to get over the practical hurdles to getting vaccinated.”

Hillbrow is a bustling, run-down inner-city suburb in the heart of Johannesburg. Its cosmopolitan, mobile community includes a significant number of migrants, attracted to the most advanced economy on the continent but, like everyone else, squeezed into low-rent apartment buildings.

The Hillbrow Community Health Centre and non-profit Afrika Tikkun clinic serve as the two public vaccination sites in the area, but the queues move slowly as the nurses register each patient on an electronic data management system before they can be given the jab.

“We assisted 108 people today – we have never reached our full capacity of 250 a day,” Nehwoh Belinda, the general manager at Afrika Tikkun, told The New Humanitarian. “People who are working might not have the luxury to take time to wait in line.”

Clinics are trying to encourage more patients to turn up by offering food parcels, and the government is providing “Vooma vouchers”, worth $6 in grocery shopping. “We are not buying them with food, but it’s a good incentive and it helps them with the side-effects,” explained nursing sister Nancy Chimdanmba at Afrika Tikkun.

“We have never reached our full capacity of 250 a day.”

Side-effects are a worry among people The New Humanitarian spoke to. The first shot of the two-dose Pfizer jab can leave some patients feeling unwell – one reason Belinda believes people can dodge coming back for the second round after 40 days, as recommended.

Informal settlements and inner-city districts like Hillbrow are among the hardest areas to turn people out to get immunised, explained David Harrison, the head of the government’s vaccine demand creation task team.

Health workers diligently climb stairs to knock on apartment doors, but in Hillbrow, where people have so many additional concerns – from crime to joblessness and poverty-related health worries like diabetes – COVID-19 is just another item on a list of risks.

“The relative ranking of COVID as a threat [in people’s lives in Hillbrow] is not as high as it is among the insured population [in wealthier suburbs],” Harrison told The New Humanitarian.

The view from the park

Joubert Park is an urban green space bordering the Noord Street minibus taxi rank: It’s home to the Johannesburg Art Gallery, an open-air market, and a number of community-based projects.

Out of the eight people interviewed here earlier this month, just two said they had been vaccinated – well below, in percentage terms, the national average.

The excuses of those who hadn’t yet taken the jab contained variations of “I’m still researching” – a hesitancy driven in part by social media conspiracy theories over the vaccine, but also by a common concern over its side-effects.

“I heard many stories of people getting sick after the jab, so I need to know more before I can commit,” said 22-year-old Elias Muthoa, taking time out from a chess game on the park’s giant board.

The amount of misinformation has caused Lebani “Rasta” Sirenje, a presenter on Radio Hillbrow, to hold off getting jabbed. “I want to tell people to go and get injected, but I’m also scared to vaccinate,” he told The New Humanitarian. “People ask me about it on air, and I have to say that I haven’t found the strength to do it yet.”

Part of the solution to getting more people immunised is to remove as many hurdles as possible. The government has launched mobile vaccination centres that visit truck stops and train stations. It’s using drive-ins as well as enlisting private pharmacies in shopping malls and NGOs working out of civic centres to administer the injections.

Sticks are also being used to persuade people. A number of private companies have made immunisation compulsory for staff, while Ramaphosa has floated the idea of vaccine passports – without which, people won’t be able to access public events.

Over in Joubert Park, football fan Xolani Matebula said that is what could finally convince him to get the jab. “If I need to get vaccinated to get inside the stadium, then I will,” he told The New Humanitarian.

Reaching out to migrants

The government has committed to vaccinating everybody in South Africa, including the four million registered immigrants, and an estimated two to five million undocumented people – an ever-debatable figure often manipulated by populist politicians who accuse “foreigners” of stealing jobs and causing crime.

It’s a hard population group to reach. The unregularised tend to steer clear of officialdom, fearing harassment and deportation. And that includes the vaccine programme, which uses people’s IDs to digitally track the rollout.

“People are scared that they will be [identified] and expelled,” Mike Kadima Kazadi, an asylum seeker from Congo-Brazzaville, told The New Humanitarian.

Pontsho Pilane of the University of the Witwatersrand Reproductive Health and HIV Institute, which works with the government on the vaccination drive, told The New Humanitarian that even expired passports can be used to register – although that’s not “widely known across the [migrant] community”.

Some migrants, who often have no support network, also fear the consequences of vaccine side-effects. “If I get sick, I will have to take care of myself – I’m on my own,” said “Tendai” from Zimbabwe, who asked not to have his real name used.

For both migrants and South African citizens, “a robust source of information is yet to prevail… with enough reach and credibility to dispel myths and misinformation,” said Pilane.

The vaccine hesitancy survey by the University of Johannesburg and Human Sciences Research Council came with a tone of urgency. “Whatever the explanation for inequalities in the vaccine roll-out, they need to be addressed,” it said.

The danger was not just over the inability to reach the vaccination goal of 80 percent of the population to achieve herd immunity, but failure would mean the government “risks losing the trust of some of the population”.