The launch late last month of human trials of a promising COVID-19 vaccine in South Africa has coincided with a surge in the country’s coronavirus cases, with the South African outbreak now ranked the fifth worst in the world.

The vaccine, developed by Oxford University’s Jenner Institute, is seen by researchers and governments as the front-runner in the race to find an effective vaccine against the coronavirus, which is now confirmed to have infected almost 15 million people globally – including more than 373,000 South Africans.

Final “Phase 3” human trials are currently underway in the UK, Brazil, and South Africa, and if all goes well, a viable COVID-19 vaccine could be ready by early next year.

However, Jeffrey Mphahlele, vice president of the South African Medical Research Council, the country’s leading health research body, cautioned against viewing an effective vaccine as “the magic bullet to solve everything”.

“It will have an impact, but it will not be immediate,” he told The New Humanitarian. “It would take probably between three to five years before we see the impact of vaccinations preventing the spread of COVID-19 infection.”

Enzokuhle Ndlovu, a 38-year-old unemployed audio technician who asked for his real name to be changed, was one of the first volunteers to enrol in the programme to test the experimental vaccine, known as AZD1222 (formerly ChAdOx1 nCoV-19).

Ndlovu decided to take part after overhearing nurses talking about the trials when he went for a routine check-up at Chris Hani Baragwanath hospital, the country’s largest, in the sprawling Johannesburg township of Soweto. He receives no payment for his participation.

“I wasn’t working and wanted to do something to help others,” Ndlovu explained in a phone interview. Worried his family would object, he only told them the day before he had his first vaccine jab.

“They were very sceptical about it,” he told TNH. “I told them, ‘I won’t do anything to jeopardise you guys… this could help you not getting sick.’”

Like all the other volunteers, 19-year-old student Nosisi Ngqiba is maintaining a diary to grade the severity of any side effects she experiences, from headaches, to fatigue, joint pains, and rashes.

And, like Ndlovu, she had to convince her reluctant family, worried about her safety, to allow her to take part. “I told them that I will be okay,” she explained.

The Soweto resident is actually more “concerned about being stigmatised” by the community, which she worries may see her as a public health risk, she told TNH.

A blow against ‘vaccine nationalism’

Shabir Madhi, professor of vaccinology at the University of Witwatersrand, has described South Africa’s participation in the Oxford trials as a “landmark moment for South Africa and Africa at this stage of the COVID-19 pandemic”. 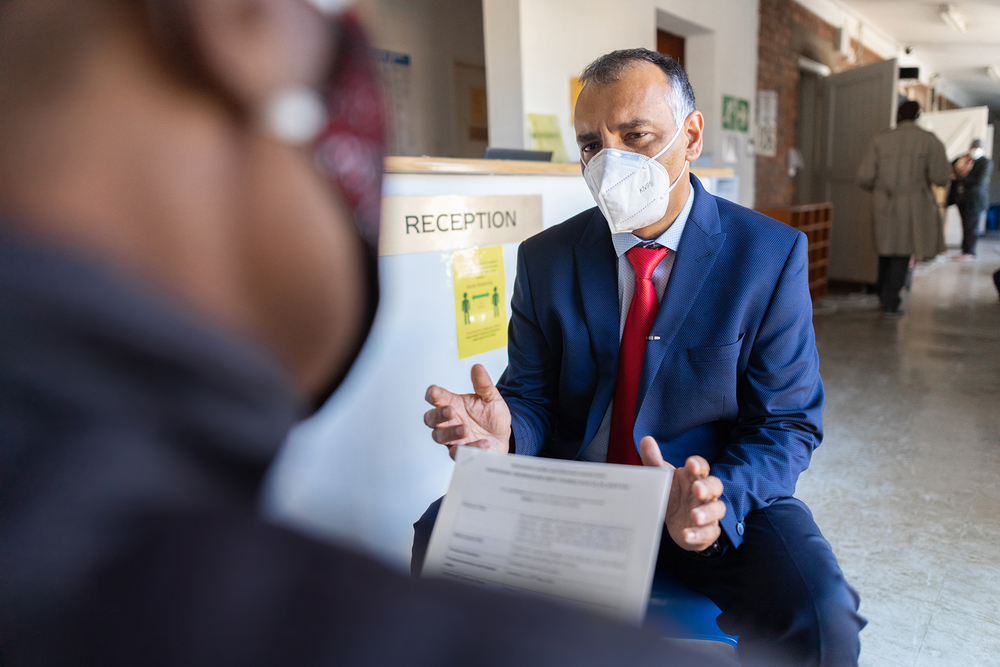 Madhi, the overall head of the South African trials, said he approached the Oxford team and pushed for his country’s inclusion, partly to counter “vaccine nationalism”, which gives wealthy countries privileged access to new drugs.

READ MORE: Will the weakest miss out on vaccines?

With positive buzz earlier this year around the Oxford vaccine, orders began pouring in to AstraZeneca – even though the drug has yet to win regulatory approval.

The Anglo-Swedish pharmaceutical has agreed to supply Europe with 400 million doses, the UK with 100 million, and 300 million will go to the United States, which has provided $1.2 billion in funding through President Donald Trump’s Operation Warp Speed initiative.

AstraZeneca has also reached a licensing agreement with India’s SII, previously known as the Serum Institute of India, which has committed to supply low- and middle-income countries with one billion doses, with 400 million to be delivered before the end of 2020.

But Médecins Sans Frontières is urging caution. It has called on pharmaceutical corporations to ensure that COVID-19 vaccines are sold at cost; that governments eschew any nationalistic interests; and that vaccine distribution is based on need. The worry is that in any stampede to the vaccine lifeboats, the weakest will get trampled.

Gavi, the vaccines alliance, is also demanding “effective and fair” roll-out of any proven vaccine, “so that anyone that needs them, gets them.” Its Covax Facility is a fund created to ensure equitable global access. It has agreed to buy 300 million doses from AstraZeneca for $750 million – but there has been criticism that the deal lacks transparency, with MSF calling for the “right voices” at the table for the development of a “people’s vaccine” that represents a “global public good”.

Vaccines don’t work the same way across all population groups. “So, by having evidence at an early stage, you can make a much more forceful argument as to why vaccines should be deployed in [our] settings,” he told TNH.

Based on complicated modelling, once 42 individuals in South Africa have developed COVID-19 at least a month after they have received the first dose of either the vaccine or the placebo, researchers will be able to do the data analysis of whether the vaccine offers any protection.

Given the rising number of coronavirus cases in South Africa, that could be as soon as November or December, said Madhi. That’s likely to be faster than the UK, which started earlier, but where the COVID-19 trajectory is dropping.

How the trial works

The Oxford vaccine uses a weakened and non-replicating version of a common cold virus that scientists have genetically modified to mimic COVID-19, tricking the immune system into fighting it.

A small-scale trial run in the UK in April proved its safety, and found that it stimulated the body to produce both antibodies and the white blood cells that fight infection.

The UK-based drugmaker AstraZeneca has partnered with the Oxford researchers to develop and manufacture the vaccine – which will also be tested in the United States later this year.

READ MORE: The development of the vaccine

Oxford’s candidate vaccine uses a harmless common cold adenovirus, taken from chimpanzees. It is genetically modified to mimic the spike proteins found on the surface of COVID-19, tricking the body into triggering an immune response. The method is known as a viral vector, and is faster to develop than traditional vaccines that use a weakened or inactive form of the pathogen.

The good news on the early-stage human trials in the UK is not evidence that the vaccine can protect against COVID-19 – that will come from the trials involving thousands of people currently underway in the UK, South Africa and Brazil. Later this year, testing on 30,000 people will begin in the United States.

The search for a vaccine did not begin from a standing start. Something like COVID-19 has been expected, and known in global public health discussions as Pathogen X – a high case fatality influenza pandemic. That scenario triggered early work by several research outfits.

“I think many of us accept that COVID-19 is exactly that Pathogen X we have been anticipating and planning for,” said Helen Rees, the director of the University of Witswatersrand’s HIV Institute and member of the COVID-19 ministerial advisory committee.

AZD1222 is one of 23 potential COVID-19 vaccines being tested in clinical trials. Two other vaccines have reached the “Phase 2” stage – where more is learnt about safety and correct dosage. They are the MRNA vaccine developed by Massachusetts-based Moderna, funded by the US National Institute of Allergy and Infectious Diseases; and China’s CanSino Biologics viral vector Ad5-nCoV vaccine.

The year-long South African trial is recruiting 2,000 volunteers aged 18-65 years at hospital testing sites in Johannesburg, Tshwane, and Cape Town – South Africa’s second city. Half of the participants will receive a placebo.

Before being accepted on the programme, the volunteers first get a medical check-up, and then have to demonstrate both an understanding of the health risks and a commitment to the intensive schedule.

“There is a lot of blood work involved,” said Anthonet Koen, the trial’s principal investigator at Baragwanath hospital. But what is most disliked is the “swab up your nose” of the repeated COVID-19 tests, he told TNH.

The trial design prioritises participants who live within walking distance of the testing sites, to avoid any COVID-19-related public transport disruptions. But as they are all in high-density suburbs, this has led to an almost exclusively Black African trial demographic.

To address that, four senior white clinicians were vaccinated on 14 July at Baragwanath – their decision a combination of professional integrity, and to counter the narrative of “poor people” serving as “guinea pigs”, said François Venter, deputy executive director of the Wits Reproductive Health and HIV Institute at the University of the Witwatersrand – one of the four volunteers.

A “very good [COVID-19] vaccine” may only provide 50 to 60 percent protection, so adhering to “non-pharmaceutical interventions”, such as masks and social distancing, remains the most effective measure against the pandemic, said Mphahlele, of the South African Medical Research Council.

South Africa is struggling with a surge in coronavirus cases since it eased its strict lockdown measures on 1 June – which included army-enforced curfews, a clampdown on travel and bans on alcohol and tobacco sales.

GDP is predicted to have collapsed by almost one third as a result – which has forced the government into scaling back the measures.

But the economy’s reboot, as well as the contested re-opening of schools and the minibus taxi industry’s defiance of social distancing guidelines – among a general unravelling of precautions – is contributing to the continued spread of the virus.

Although the need for a vaccine is clear, South African researchers say it’s also important to manage expectations.

Only about 10 percent of vaccines that go into clinical trials worldwide are eventually licensed for use, noted Madhi. And, even if the Oxford vaccine “works”, we won’t know until after the trial period how long that immunity lasts.