Today on Giving Tuesday, we're asking our readers to help us keep the momentum going.

Support independent journalism you can trust.

Beyond the bang-bang: Reporting from the front lines of peace. This article is part of our peacebuilding coverage, reporting on how atrocities can be prevented, how societies can be made more resilient, and how peace can be sustainably built.
MALAKAL, South Sudan

More than 18 months into a power-sharing government between South Sudan’s rival leaders, local conflicts still simmer, undermining a fragile peace accord. But in the northern flashpoint town of Malakal, a group of women peacemakers is trying to reverse that narrative by healing ethnic divisions to head off another bout of violence.

The gateway to the country’s largest oil fields, Malakal, once a thriving cosmopolitan centre, is now an empty shell, its deserted streets strewn with abandoned cars, rusted bedsteads, chairs, zinc sheeting – the detritus of three years of fighting.

Situated on the eastern bank of the White Nile, the town changed hands 12 times between 2013 and 2016 in a three-way conflict between the forces of President Salva Kiir; his archrival and now vice president, Riek Machar; and a Shilluk Agwelek militia led by General Johnson Olony – whose community considers Malakal to be part of an ancient Shilluk kingdom that straddles both banks of the river.

When the fighting stopped, Malakal – the capital of Upper Nile state – was in the hands of the government army, supported by a militia drawn from the Padang Dinka, a rival ethnic group that had expanded into Shilluk territory with Kiir’s backing.

A so-called Protection of Civilians (PoC) camp guarded by UN peacekeepers – home to 34,000 people and a 15-minute drive from the town – is the last significant Shilluk presence on the “ethnically cleansed” eastern bank of the river.

Shilluk here still hold out hope of being able to return to their former homes. But most of their houses in Malakal have been destroyed or are occupied by Dinka – a deliberate pattern of “population engineering”, say scholars, and a deep-seated grievance for people in the PoC.

Yet there is a memory of life before the war, when Dinka, Shilluk, and Nuer – the ethnic group most closely linked to Machar’s rebel SPLA-IO movement – lived together in what was once South Sudan’s second-largest town.

Rebecca Anyiel wants to revive the interdependence that historically existed. A Dinka, she is part of the Women’s Union, a local self-help group whose membership cuts across ethnic divides – around one third of the women in her group are Shilluk from the PoC.

“There is a reason for the mistrust between both communities,” she told The New Humanitarian. But by “speaking honestly” to one another, “asking for forgiveness”, and atoning for wrongs, those “fears will diminish slowly over time”.

Like Anyiel, most of her group’s members are market traders and meet regularly around a wooden table in an old building near Malakal market. These gatherings – to discuss how to strengthen their businesses and promote women’s rights – have helped forge real friendships between the women in Malakal town and those in the PoC.

“You can find women from the PoC and the town working together,” said Anyiel. “They are selling fish and vegetables in the market. This contributes to peace and encourages people to stay together.” 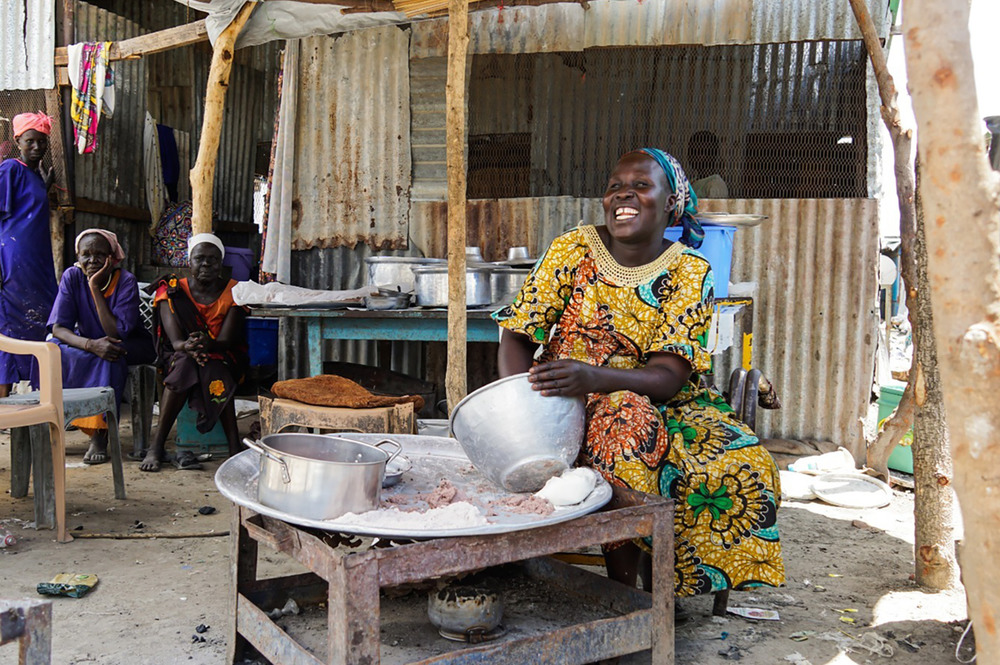 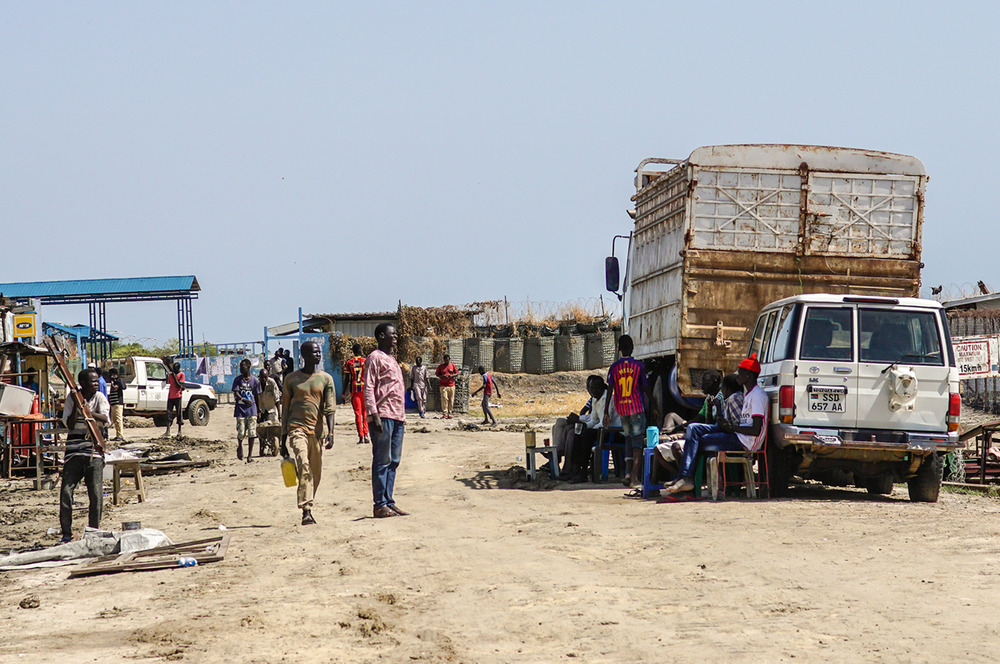 Business is getting better in Malakal, but tensions remain. People in the UN-protected Protection of Civilians (PoC) camp have better facilities than those in Malakal town, but the increased trade is benefiting both communities. (Natalia Ojewska/TNH)

Angelina William is part of a “commuter population” that leaves the PoC by day to trade in the town – or to farm and fish – but who make sure they return to the security of the camp by nightfall. She sells tea from a stall in the market – more cost-effective than trading in the camp – and makes enough to send her children to school in the Sudanese capital, Khartoum.

“What is motivating both communities to improve the relationship is the need to provide for our families,” she told The New Humanitarian. “Thinking along ethnic lines is not helpful. If we want to feed our families, we need to stay together.”

Malakal is volatile. Earlier this year, Kiir blocked Olony – the Agwelek commander – from being appointed as Upper Nile governor. Instead, he supported Budhok Ayang Kur, a candidate without a military power base who is unlikely to push back against the marginalisation of Shilluk on the eastern bank.

When Kur arrived at Malakal’s tiny airport in March, people from the PoC turned out to greet him, and to escort him to the governor’s office in town.

Some wore traditional warrior attire of cheetah skin and held shields and spears. They sang songs of war and mourning, but there were also plenty of banners calling for peace. “Let us work for stability. No war. No tribalism”, one said. “Yes, for Unity of People from Upper Nile”, read another – a reminder of the region’s shared history.

But what the Shilluk felt was a celebration of their culture was viewed by some Dinka as provocation. As the throng reached the market, some youths attacked – beating people with sticks and shooting. Three people were killed in the mayhem.

“I was not afraid to give them shelter... trust-building between both communities is incredibly important.”

The violence was a setback for local groups like the Women’s Union and the UN-sponsored workshops held in the PoC that try to foster better relations between the communities. However, there were also glimpses that day that such peacemaking efforts are beginning to have an impact.

Anyiel was making her way to the market when the shooting started. About to turn back, she spotted a group of Shilluk women running for cover. She called out to them to follow her home, and together they waited out the violence.

“I was not afraid to give them shelter,” Anyiel said. “Trust-building between both communities is incredibly important.”

And she was not the only one who helped. As the women sat nervously together, she called the Dinka paramount chief in Malakal to find out what was happening. He told her he too was sheltering Shilluk escaping the trouble in town.

Malakal’s conflict has been frozen in place for years: a consequence of the Padang Dinka’s influence in Juba, which is partly due to their success in keeping Upper Nile’s oil fields – one of the government’s few foreign exchange earners – running.

But a split within Machar’s SPLA-IO in August has upset the power-sharing equation on which the 2018 peace settlement was based, and Malakal is suddenly back on the political agenda.

SPLA-IO commanders led by generals Simon Gatwech and Olony – the veteran Agwelek warlord – no longer recognise Machar’s leadership, and there has been fighting between both sides in the Magenis area of Upper Nile, as well as in neighbouring Jonglei State to the south.

Gatwech and Olony accuse Machar of abandoning his men in the bush, and of complicity in government delays in implementing steps outlined in the 2018 peace deal, especially the creation of a new national defence force – one of the agreement’s key provisions.

Throwing a wrench into the political process, they have called for the transfer of all the seats allotted to Machar under the unity agreement to their faction. Eager to see Machar weakened, Kiir has begun negotiations with the group in Khartoum.

Olony is also demanding greater protections for his Shilluk community in Upper Nile. Were he to be brought into government – as a placatory step – it could signal Kiir’s willingness to renegotiate his alliance with the Padang Dinka, South Sudan watchers say.

“For the Shilluk, it would likely represent a move towards greater control over Malakal,” said Alan Boswell, senior South Sudan analyst for the International Crisis Group. For the Padang Dinka, who describe Olony as a “warmonger”, they fear he could take revenge.

The political dynamics already seem to be changing: Last week, the Upper Nile government set a November deadline for all “illegal occupants” of IDP-owned homes in Malakal to vacate them – a potential first step to recognising Shilluk land claims.

“It’s too early to tell what this [announcement] means: whether it turns into a significant policy, or it’s just testing the water to see how it’s received,” Mark Millar, a conflict analyst with the Norwegian Refugee Council, told The New Humanitarian. “But it does play into the discussions with Olony, and may demonstrate [Kiir’s] good faith, that he might be prepared to do something on Malakal.”

Land remains the key stumbling block to reconciliation. For the Shilluk in the PoC, a peace process must include restitution of the homes and farms they lost as a result of the war. It’s also one of the few points of contention between members of the Women’s Union.

“We have to tell people [occupying] other people’s houses to leave, to give a chance for [our] resettlement,” said Jospina James Lah, head of the Peace Committee – a PoC-based counterpart to the Women’s Union.

Not all Dinka support the new settlers occupying Shilluk homes, many of whom are Dinka from the distant Equatoria region who were resettled in Malakal during the war.

“Those [Dinka] who used to live in Malakal before the 2013 war are critical of the status quo [in which the Shilluk have been forced from their homes],” said Adam Ajak Gong, the Shilluk paramount chief of Malakal County. “They say we need to coexist with Shilluk.”

Nyapach Aruach Denk is not yet ready to take that risk. She’s more than aware of the many reports of Shilluk being killed as they follow up on their land claims in and around Malakal.

“The workshops and meetings have borne some fruit, even if it’s still very little.”

“I will not [go back] unless the government evacuates those staying there and gives me a document showing that I am legally authorised to stay – the Dinka have guns,” she told The New Humanitarian.

For Millar, the conflict analyst, the issue goes beyond land to include access to state services and reparations. “People don’t just need their houses back but need to feel they have secure futures in them,” he explained.

The hyper-local peace initiatives represented by the Women’s Union and the Peace Committee are a step towards creating the conditions for reconciliation. “The workshops and meetings have borne some fruit, even if it’s still very little,” said Gong, the Shilluk chief.

But valuable though local engagement is, it takes time to heal divisions that run as deep as those in Malakal. And the conflict here goes beyond maps and state boundaries – it has become a zero-sum competition between communities over access to resources and political power. For Boswell, the ICG analyst, “Malakal requires a political solution. No amount of trust-building can cross that bridge on its own.”