Beyond the bang-bang: Reporting from the front lines of peace. This article is part of our peacebuilding coverage, reporting on how atrocities can be prevented, how societies can be made more resilient, and how peace can be sustainably built.


Editor's note: This is the second in an occasional series exploring the potential for peace in Cameroon's four-year conflict. The first article examined the challenges to formal peace talks. Up next, a who's who of the main parties to the violence.
Listen to this article:
BUEA, Cameroon

A small but growing grassroots peace movement is trying to bring an end to the four-year secessionist conflict in Cameroon’s English-speaking regions – an internationally neglected crisis that is becoming increasingly deadly and complex.

Formal attempts to negotiate a settlement between the government and fighters demanding independence for “Ambazonia” have stalled. Internationally led efforts are hamstrung by deep divisions within the separatist movement, and by the refusal of the government – which argues that the conflict is an internal affair – to engage with external mediators.

Spurred by the lack of progress in getting the warring parties around a conference table, a series of grassroots peacebuilding initiatives – launched by private individuals, rights groups, and the Catholic church – have cautiously moved in to negotiate local peace deals in Cameroon’s two anglophone regions.

But these interventions – many led by women – must tread carefully to avoid being labelled as either pro-government or supportive of the armed movements fighting for the independence of the English-speaking Northwest and Southwest regions. 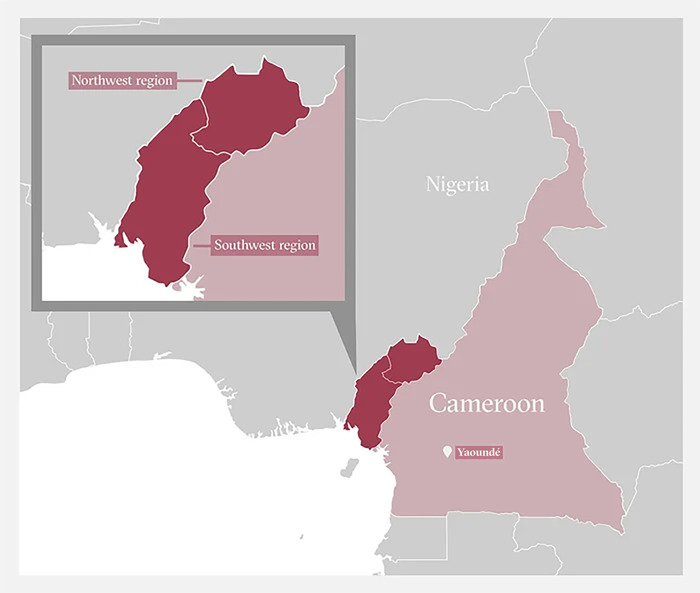 “Any peace movement that is not approved from the grassroots [of the secessionists] will identify those peace leaders as ‘blacklegs’, as traitors to the anglophone cause; and that will have some implications for personal security,” said a local rights activist who asked not to be named so they could speak freely.

The rural-based conflict has upturned the lives of more than two million people, according to the UN. What began in 2016 as a protest over the two anglophone regions’ marginalisation by the majority French-speaking government has degenerated into increasingly anarchic and indiscriminate violence in which the civilian population is most at risk.

Suspected separatist groups – who number between 2,000 and 4,000 fighters – have abducted, tortured, and killed traditional chiefs, human rights activists, lawyers and journalists. Government forces are accused of similar offenses, including the torching of entire villages.

Sexual and gender-based violence is perpetrated by both sides. Between February and December 2020, the UN documented nearly 2,000 cases of rape and abuse across the two anglophone regions, and nearly 500 cases between January and March 2021, according to documents seen by The New Humanitarian.

The work of peace activists is made harder by the splintering of the once-unified separatist movement, while the government’s counter-insurgency approach – recruiting and arming local militias – fuels animosity between communities.

“This is a conflict without a head,” said Marc Serna Rius of Reach Out, a humanitarian NGO based in Buea, the capital of the Southwest region. “Dialogue is really complicated, because who do you dialogue with?”

Since 2018, two rival coalitions, known as “Interim Governments” (IGs), have contested leadership of the separatist cause – both accusing the other of being “illegitimate”. One is loyal to Sisiku Julius Ayuk Tabe, who is serving a life sentence on terrorism charges in Yaoundé’s notorious Kondengui Central Prison, and the other is headed by US-based former preacher Samuel Ikome Sako.

But these IGs have only limited influence on the ground. Individual separatist fighters – known locally as the “Amba boys” or simply “the boys” – pronounce themselves “commander” or “general” at will, sparking infighting that in recent months has led to more deaths than clashes with the military, local aid groups say.

Of the dozen separatist fighters The New Humanitarian spoke with, none defined themselves as loyal to a particular IG, and many of them weren’t even aware the movement had split.

“You just go with who has good [military equipment], who comes from your village, who has a [better] camp,” said one separatist, who asked not to be named, explaining how fighters determined which group to join.

“It’s a popularity contest. They go from one [commander’s] camp to another,” said a local rights activist. “There are commanders without soldiers, and soldiers keep changing affiliation.”

Chris Anu, a separatist spokesman, condemns women peace activists he sees as traitors for wanting to end the violence

In the Northwest region, the conflict has inflamed existing tensions over land and grazing rights between ethnic Fulani pastoralists, known as Mbororos, and local farmers – generally perceived by the government as pro-secessionist.

Separatist fighters have attacked Fulani herders and stolen their cattle. The security forces, in turn, have provided weapons and launched joint attacks with Fulani militia on villages, as was the case in a February 2020 massacre in which at least 21 people were killed.

The violence has escalated as community tensions have deepened. Fulani militia have raided over a dozen villages since February 2021, killing at least 17 civilians and displacing more than 4,000 people, according to the Center for Human Rights and Democracy in Africa, a civil liberties group.

Stepping into the vacuum

Local peace activists operate without the political clout or protection afforded to international mediators. But they do have grassroots relevance, and have managed to make some breakthroughs in an otherwise intractable conflict.

“The local civil society organisations are doing a tremendous and enormous job to bring back peace,” said Lilian Atanga of the Coalition for Dialogue and Negotiations, an international NGO working to facilitate dialogue between the Cameroonian government and separatist groups.

“What they do for social cohesion, for healing, for resilience, the humanitarian activities [they are involved in], the psychosocial activities, working on gender-based violence, demobilisation – [these are all important],” she told The New Humanitarian. “It is not just one thing that [will bring] peace.”

The Southwest/Northwest Women’s Task Force, for example, has been key in negotiating with separatists to soften a long-running school boycott and allow children to return to class. They have also worked on reconciling rival separatist leaders, and helped ex-fighters – who have laid down their weapons under a government amnesty – to reintegrate back into the community.

The government’s controversial disarmament, demobilisation, and reintegration (DDR) programme grants amnesty to former separatists who lay down their weapons.

With these combatants numbering no more than 4,000 fighters, it could have a noticeable impact on levels of violence if properly managed, said a local aid worker, who asked not to be named given the sensitivity of the issue.

But the DDR programme, which is supposed to provide housing, education, and agricultural and vocational training to the ex-fighters has been poorly implemented – a consequence of limited public support for helping even ex-“terrorists”, as well as a lack of funding.

Patience in such efforts may be wearing thin.

In August 2020, more than 100 former fighters fled their DDR camp, and in February 2021 dozens of ex-combatants gathered in Bamenda, the capital of the Northwest region, to protest the programme's failure to provide financial support and to reintegrate them back into society.

The Justice and Peace Service (JPS), which is connected to the Catholic church, has been instrumental in resolving disputes between Fulani pastoralists and farmers in Nwa, and in other districts in the Northwest region.

Although the Fulani have so far refused to cooperate with the JPS, the church group has been successful in convincing farmers not to carry out retaliatory attacks against Fulani whose cattle wander into their farmland, according to Sister Falie Minkoue, a coordinator with the service. 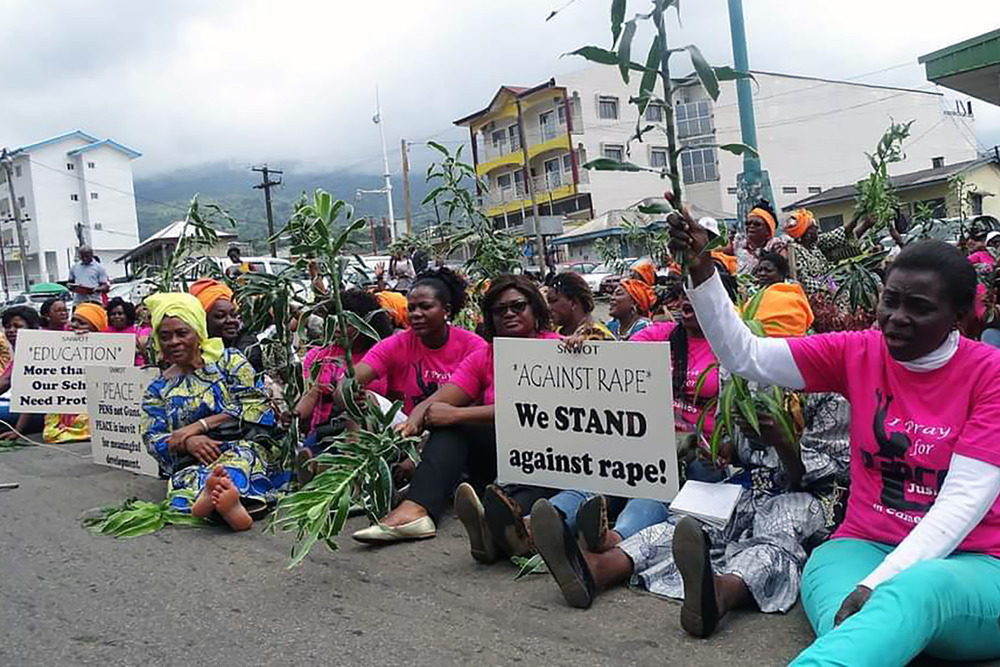 For the past two years, the JPS has also worked to rebuild traditional village councils, and to train village chiefs to address land conflicts and other civilian disputes rather than having people turn for “justice” to local separatist fighters – whose summary rulings have led to serious rights violations.

“We want to avoid the situation where people bring their cases to ‘the boys’,” said Minkoue. “We are trying to empower the traditional council on how to manage conflict, how to handle cases, how to document the cases that they have handled.”

The dangers of peacemaking

Peacemaking is not without its risks. Priests and other grassroots activists have been arrested and detained by government security forces, and abducted and tortured by separatists.

Due to its deep connection to rural communities, the Cameroonian government has often accused the Catholic church of siding with the secessionists. But the church has also angered separatists by helping fighters who have surrendered, and by voicing its opposition to their revenge attacks against Fulani herdsmen.

“Both sides – the state armed group and the non-state armed group – are expecting the collaboration of the church,” said Minkoue. “They know we have credibility with the community, so both sides want us to collaborate with them… That is the biggest challenge.”

But while local initiatives are working to fill the gap left by stalemated national and international peacebuilding efforts, they cannot address the root causes of the conflict.

“You cannot do without [local peacebuilding], but it alone cannot solve the problem, because the problem is deeper than just the armed boys,” said Atanga of the Coalition for Dialogue and Negotiations.

“It has gone beyond just mere discrimination by the government [against the anglophone regions],” she added. It is now “an ideological problem, an identity problem” with the government widely seen as an occupying power, she explained.

The expanding conflict is also raising questions over what an effective peace process would look like – and who should sit at the negotiating table.

“Who, in the end, needs to be included in a peace process? The Fulani? All the various commanders on the ground, all the IGs?” asked a peace activist linked to the Southwest/Northwest Women’s Task Force who requested anonymity. “How impactful are all these movements going to be if there is a peace process?” asked another.