She Said: Women’s lives, women’s voices You’ve heard it before. Women and girls pay a heavy price during humanitarian crises. She Said is an ongoing collection of reporting in which women offer glimpses of their lives, speaking with TNH from COVID-19 lockdowns, situations of conflict and displacement, and other global emergencies.
NAIROBI

The confrontation was caught on film. As three armed policemen try to pull Wanjira Wanjiru away, she clings to the wing-mirror of a parked car and refuses to move.

“Why are you protesting?” one of the steel-helmeted policemen asks.

“Who is killing you?”

“You police! You’re killing us in our communities!”

Then, as the policemen back off, Wanjira, fist in the air, defiantly chants what has now become an iconic line: “When we lose our fear, they lose their power!”

Her resistance during the “Saba Saba” protests that day, held annually on 7 July to commemorate Kenya’s pro-democracy movement that emerged in the 1990s, resonated as a symbolic moment in Kenyans’ fight against police violence – an issue now in the global spotlight after a string of police shootings of Black Americans in the United States.

What made Wanjira’s stand all the more significant was that it was a woman representing the soul of what has been an historically male-led struggle for reform – despite the heavy price women have paid.

Violence is emblematic of Kenyan policing. There has been a steady rise in killings and disappearances linked to the police over the past decade, with 2019 the most deadly year so far, with 144 alleged cases, according to Missing Voices, a nonprofit group of civil society organisations tracking police violence.

Excessive force and extrajudicial killings are routinely used to maintain law and order, especially in the poorest neighbourhoods, human rights groups told The New Humanitarian. At least eight people were killed over just two months at the beginning of the year in Kenya’s informal settlements.

There has been a steady rise in killings and disappearances linked to the police over the past decade, with 2019 the most deadly year so far.

And the police have repeatedly used live ammunition in the enforcement of a COVID-19 lockdown, killing at least 15 people between March and early June. Some of the victims may have been hit by stray bullets, but others appear to have been deliberately targeted.

That death toll is higher than any other country in the region, with only Uganda coming close, with 12 alleged COVID-19-linked killings by the security forces.

“[COVID-19 is] a dangerous moment,” Irũngũ Houghton, the executive director of Amnesty International Kenya, told TNH. The dusk-to-dawn curfew has been imposed “without oversight or close monitoring [of police conduct] by the media or by human rights organisations,” he said, implying that abuses could now be going unnoticed under their radar.

Men are depicted as almost the sole victims of police violence. But the reality is more than one third of alleged police killings and disappearances involve women, according to Missing Voices.

One of the most high-profile cases was the death last year of Caroline Mwatha, who had campaigned against extrajudicial killings until she disappeared, and was found dead days later in a city mortuary.

And there is an additional terror – the sexual violence perpetrated by the police against women.

“There's been a lot of sexual assault on women,” said Fatuma Mohamud Mohamed, a commissioner with Kenya's Independent Policing Oversight Authority (IPOA), a statutory watchdog. “Even in traffic cases, you find that women get sexually assaulted.”

The Kenya National Commission on Human Rights has accused the security forces of committing more than half of the recorded cases of sexual violence during post-election violence in 2017.

In response to the violence and abuse, Wanjira last year established the Women in Social Justice Centres Movement to advocate for women’s rights and political participation.

“It’s an organising space for just women outside the patriarchal control of men,” she told TNH.

The centres bring together female social justice activists from some of Nairobi’s poorest communities, women who all too often know somebody personally – a son, husband, or brother – who has been a victim of police violence.

Wanjira, born in Mathare, one of Kenya’s largest informal settlements, shares that experience. Her older brother, Damason, is among the at least 712 mostly young people from low-income neighbourhoods suspected of having been killed since 2007.

Damason had been Wanjira’s protector when she was growing up. In elementary school, he made sure she had lunch to eat so she never went hungry. And he always had one of his friends wait at the bus stop to meet her and help her cross the street after school.

Wanjira had left Mathare for boarding school when she heard Damason had been killed in a suspected police shooting. At the mortuary, her family saw that the bullet had entered through the back of his head and out his mouth – execution style. He was 19 years old at the time.

Damason’s death pushed Wanjira to co-found the Mathare Social Justice Centre – a human rights advocacy group – when she too was aged just 19.

The alleged brutality of the police is due to “the training they undergo”, said Mohamed, the IPOA commissioner. They are trained to believe “your enemy is the civilian”, she said. Some policemen have become notorious killers – feared and revered – who operate with seeming impunity.

Mama Victor lives in a single-room, dirt-floor shanty house deep in the winding maze of Mathare’s alleyways. Three years ago, she lost her two sons, 25-year-old Bernard and 22-year-old Victor, on a single day.

She suspects they were shot by police as they were walking down the street on their way home after work, caught up in a protest during Kenya’s post-election violence.

“It was a hard moment because there was nowhere to go. It was just me. I'm just a widow,” said Mama Victor. “I felt very, very angry, and I was sad.”

“That is where I started to be an activist,” she told TNH. “To start to defend the other women.”

Helped by the Mathare Social Justice Centre, she worked with other women in the community to form the Mothers of Victims and Survivors Network to provide strength, comfort, and purpose to other women whose loved ones were killed by police.

The group, officially launched in February this year, supports its members as their legal cases against the police work through the courts – often frustratingly slowly – and documents new victims of police misconduct. 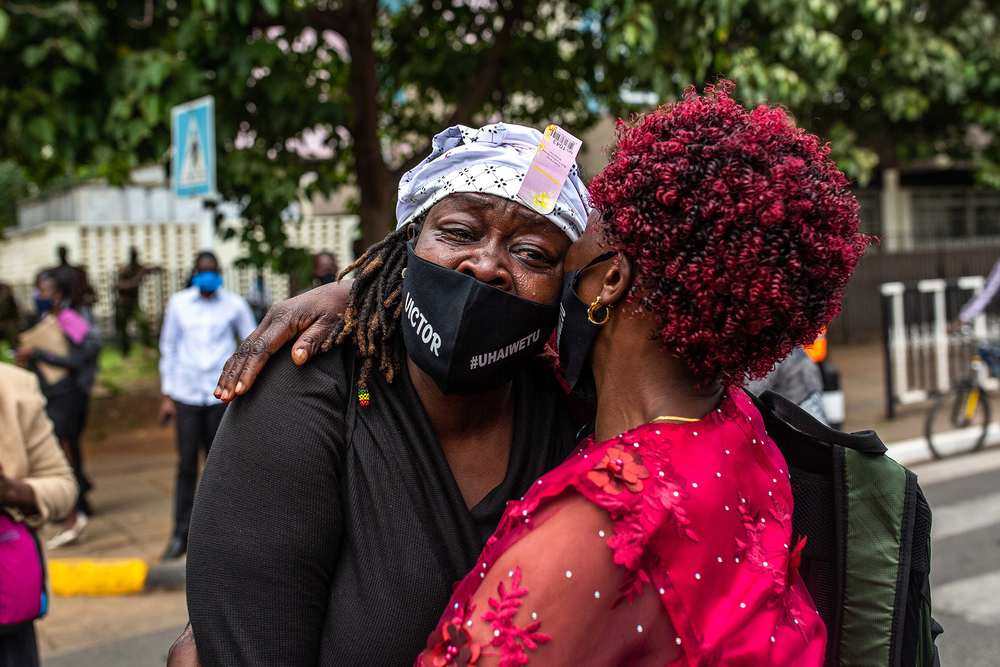 Patrick Meinhardt/TNH
Mothers whose sons were killed by Kenyan police gather in front of Kenya’s parliament in Nairobi wearing masks with the victims’ names as a form of protest, on 9 June, 2020.

Mama Victor says police sexual violence has been a particularly difficult area for members to address, as most survivors fear retribution if they report.

“How can you tell them that, ‘I want to [file a] case with the government, and the government is the one who raped my child?’ So, they run away. They don't [file]. We have tried so much,” she said.

“How can you tell them that, ‘I want to [file a] case with the government, and the government is the one who raped my child.’ So, they run away.”

The police appear to be making some effort to address the issue. The inspector general of police, Hillary N. Mutyambai, holds bi-weekly Twitter conversations with citizens called #EngagetheIG – and concerns about rape and sexual violence by the police are often raised.

“What are you going to do to address the cases of rape by police officers that we see? Having a desk in a police station isn’t going to do much,” read one such Tweet by @policebrutalityKE on 20 July.

Faith Kasina, 25, from Kayole, a rough neighbourhood plagued by gangs and drugs, was sexually assaulted by a policeman at last year’s Saba Saba demonstrations.

“[The police] came out to beat us and then I was like, ‘You can't. You can't touch me’,” said Kasina. “That's when he touched my breast and told me, ‘You know what? We can do to you anything we want; we can do anything we want.’ And then he started abusing me, calling me names, and then now they took me in.”

“The first one was ours,” said Kasina. “And so, the other women out there, especially young girls, realised, ‘By the way, we could actually join in and speak in one voice’.”

“I think what brings [women] together is our passion for this. [To ensure] the child I bring into this [world] doesn't face the same life I'm facing.”