Salem Radi was overjoyed when news came through that he and his family would soon be allowed to return home after almost two years in al-Hol, a packed camp in northeast Syria that has become notorious for housing both supporters and victims of the so-called Islamic State.

The 44-year-old man, his wife, and eight children fled their rural hometown of al-Susah in eastern Deir Ezzor province in March 2019, part of an exodus of tens of thousands leaving the extremists’ rapidly shrinking territory in that part of Syria, battles raging behind them.

Along with other locals who fled, they were taken north across the desert by the Kurdish-led Syrian Democratic Forces. Backed by a US-led coalition, the SDF led the fight against IS in the area. After an intense security screening process, Radi and his family joined the almost 70,000 Syrians and foreigners in al-Hol, the largest camp in the Kurdish-held northeast.

Life behind the towering barbed wire fences was punishing, Radi told The New Humanitarian. The water wasn’t safe to drink, the bread unpalatable, and medication not readily available.

Freedom of movement turned into a thing of the past, and privacy became an unattainable luxury in a camp where many were forced to share tents with other families.

The situation went from bad to worse in the summer of 2020 when COVID-19 reached the overcrowded camp. The high rate of infection among healthcare workers forced many clinics to shut their doors. 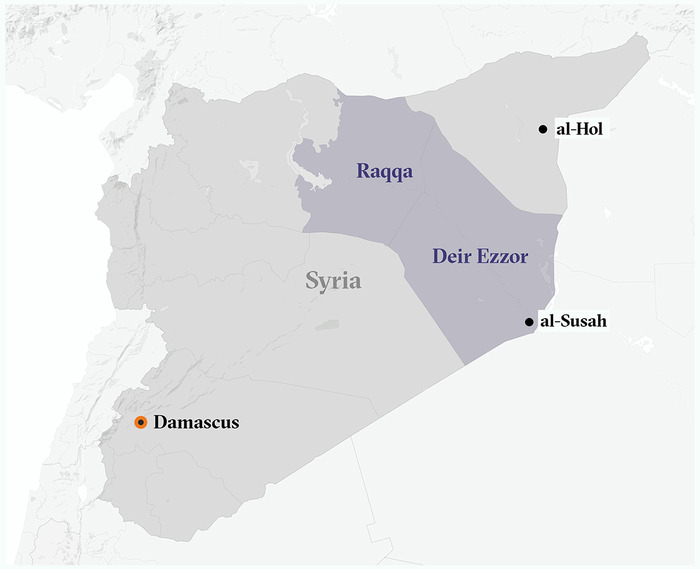 So when the Syrian Democratic Council (SDC), the SDF’s political arm, announced in October that it would be making it easier for Syrians in al-Hol to go home, Radi and his family jumped at the chance, returning to al-Susah in November. But going home hasn’t been all Radi and others had hoped for. Nearly two years after IS was defeated in Syria – and two months since the SDC began allowing more people to leave al-Hol – many parts of the country remain largely uninhabitable, and help from NGOs or aid agencies is often nowhere to be found.

Radi knew it would be bad, but nothing prepared him for the level of destruction he found in al-Susah. The village, once home to around 9,000 people, had been hit by coalition airstrikes in 2018, and served as a makeshift base for the SDF while it fought IS in early 2019.

After years of war, the cluster of sand-coloured houses perched on the banks of the Euphrates river was unrecognisable.

“My house was completely destroyed,” Radi told TNH by phone from al-Susah.

What to do about al-Hol has long vexed humanitarians, politicians, and security types alike. The mixture of die-hard IS supporters and their relatives, as well as people who were forced to live under the group’s occupation, has led to violent incidents and fears that extended stays in the camp could encourage further radicalisation.

And al-Hol is not a unique problem. Other countries in the region have also struggled with what to do with those with perceived IS affiliations. Three years after it declared victory over the group, hundreds of thousands of these people are still languishing in Iraqi camps.

Before the October decision, some Syrians with local guarantors willing to vouch for them had been leaving al-Hol for around a year. But the new rules mean camp residents no longer need this sponsorship to go home. Instead, households who wish to return are asked to register their names and undergo security clearance by the SDF.

An estimated 6,500 Syrian nationals left al-Hol and returned to their communities in 2019 and 2020, but more than 2,000 individuals have already left since the October announcement, Sheikhmous Ahmad, the head of the SDC’s Office for Internally Displaced Persons told TNH.

The reasons for the policy shift are unclear. A December 2020 UNICEF report said the change was merely a way to decongest the busy camp, but local pressure in parts of the country where IS once thrived likely played a role too. Starting in September 2019, occasional demonstrations in Deir Ezzor saw civilians take to the streets to call for the release of women and children from displacement camps, among other demands.

Ahmad said Syrian nationals had a right to return to their homes, and most were eager to leave “one of the most dangerous camps in the area”.

The pro-Kurdish Rojava Information Center reports that there were seven attacks with seven deaths by IS-affiliated women in al-Hol in November alone.

Ahmad said keeping so many people in the camp had become too heavy a burden for the Kurdish administration. He added that the situation worsened in October 2019 when Turkey’s land incursion in northeast Syria caused international NGOs to evacuate staff and close or scale down operations, further stretching resources.

Little to return to, less help

While the new rules means some civilians won’t languish in al-Hol for so long, going home poses its own set of challenges.

The men, women and children who have left al-Hol reside primarily in provinces like Deir Ezzor and Raqqa, where the legacy of war remains, the remnants of IS cells are still active, and services and employment opportunities are limited.

“Large swathes of Raqqa, one of the more popular areas for return movement, are still destroyed, with unexploded ordnance remaining a major hazard for children and their families,” Save the Children’s Syria Response Director Sonia Khush told TNH.

“Raqqa is still itself reeling from conflict,” Khush said. “It is missing key infrastructure that families need to use [like hospitals, schools, even markets], and doesn’t have adequate livelihood opportunities.”

The main challenge, said Mohammad Theweini Mehemid, the head of al-Susah City Council, is the lack of housing and jobs. In al-Susah, people like Radi return to find charred farmland and more than 1,200 uninhabitable homes.

Just south of al-Susah, in the town of Baghouz, where IS put up its last stand in Syria, another 1,400 homes were destroyed or damaged, according to local tribal leader Salim al-Marsoumi.

Unemployment and financial woes have been compounded by a countrywide spike in food prices. In March 2020, the World Food Programme reported an increase in households forced to reduce their daily meals from three to two, and having to remove children from school to save money or bring in additional income.

“Our feelings were a mixture of joy for returning to our homes, and sadness because of the situation we found our region in,” said 22-year-old Iman Dayo, who returned to al-Susah in November to find the roads punctured by shell craters and filled with stagnant rainwater.

“It is not easy to see what happened to our areas,” he said, speaking by phone.

Alexandra Saieh, advocacy adviser for the Norwegian Refugee Council, told TNH there are a limited number of NGOs working in the areas where al-Hol residents hope to return to.

“We also know that many IDPs [internally displaced persons] who have returned are struggling to make ends meet, there are very few livelihood opportunities, there’s very little international presence, and access to resources is a challenge for them,” said Saieh.

Major aid agencies say they’re working with NGOs and local partners in Deir Ezzor to provide returnees with support – UNICEF spokesperson Salam Abdulmunem al-Janabhi told TNH it is contributing “health, nutrition, water and sanitation, protection and education services''. But residents and local government officials told TNH they were yet to see this support.

Mohammad Theweini Mehemid, the head of al-Susah City Council, said neither NGOs nor the Kurdish administration had helped returnees in al-Susah.

Some NGOs have cited access problems as the reason they are not present in Deir Ezzor, while others simply don’t have the capacity to go in. “We’re focusing on other areas for now, a new area will overstretch us,” said Save the Children’s Khush.

Those who pass the SDF’s security clearance may not have blood on their hands, but those who held low-level positions or harboured support for IS are likely among those allowed to leave.

This has led to suspicions between neighbours.

“We have lost the ties of kinship, even saying “salam” [hello] between brothers became rare,” said Muhana, who returned from al-Hol to al-Susah in June 2019, and asked that his real name not be used. “What we built in 40 years, we lost in three [years of IS occupation]. Now we will start again from zero.”

Although Syrian nationals allowed to leave al-Hol have mostly been identified as low-level IS members, non-combatants, or family members, they are kept under surveillance upon leaving, an SDF commander who asked to remain anonymous told TNH.

In a region where tribal, community, and family bonds have been repeatedly challenged by war and the rule of IS, the reintegration of IS-affiliated members will likely take time.

It will take resources, too.

The problem, said Dareen Khalifa, senior Syria analyst at the International Crisis Group, is that “there aren’t any serious programmes in northeast Syria that help reintegrate the released families, whether by providing social or mental health support.”

“The SDF’s waning capabilities and resources, and the limitations they place on NGOs, place the burden on local communities to integrate deeply traumatised and often radicalised women and children,” explained Khalifa.

Although a significant number of Syrian nationals in al-Hol are eligible to go home under the new scheme – at least for the time-being – not everyone is.

“People from regime and opposition areas are not allowed to leave now because of security reasons,” said the SDC’s Ahmad, referring to the ongoing conflict between the government of President Bashar al-Assad, rebels, and Turkish-backed militias in parts of the north.

Ahmad estimates that approximately 15,000 individuals in al-Hol are originally from regime-controlled or Turkish-held areas.

Others forced to remain in the camp for now include Iraqis, Europeans and other foreign nationals whose countries don’t want them back, and people who fail the security screening. Those who don’t have identification – documents can often be lost or forgotten in flight – are also unable to leave.

“A large number of Syrian internally displaced persons, as well as Iraqi and foreigners, in al-Hol are missing basic civil documentation such as IDs, family books, passports,” said NRC’s Saieh. “That is a big concern for humanitarians as well as the people in al-Hol.”

The return effort is an imperfect and limited effort, but it has still mostly been welcomed by returnees and humanitarians, who have long argued that long stays in camps are bad, both for the individuals and for society as a whole.

But for some, said Ali Alleile, director of the local NGO Sam for Development, which works in Deir Ezzor and other provinces, remaining in al-Hol might still feel like the safer option, rather than returning to an insecure part of the country without a home or much else.

At least people in al-Hol have regular food, accommodation, and a few services, said Alleile. “These people, they will return to their homes, but they will find nothing.”

With reporting support from Kamiran Sadoun.