The guards sweated through their balaclavas as they inspected my papers outside al-Hol in northeastern Syria, their faces covered for fear of retribution from some of the camp’s nearly 69,000 residents.

It was just one sign of what became clear to me during the two days I spent at al-Hol last month: the camp’s civilian administration, the security personnel, and the dozens of aid NGOs are under-resourced and overwhelmed, and tensions are running high.

Much has improved since early 2019 when tens of thousands of new arrivals came to al-Hol, emerging from so-called Islamic State’s last stronghold in Syria. Back then, women and children were sleeping out in the open after long journeys and months of food shortages in Baghouz – the town in Syria’s eastern Deir Ezzor province they fled as IS lost ground.

However, when I visited in July, al-Hol residents – two thirds of whom are under the age of 12 – were still complaining of a lack of clean drinking water, difficulty in obtaining medical referrals for treatment outside the camp, and poor living conditions.

These criticisms are backed up by analysis conducted by REACH, an organisation that compiles humanitarian data. It showed that as recently as May, only 23 percent of those seeking medical care outside the camp were able to obtain it.

Al-Hol is overcrowded and unhealthy – in June the World Health Organisation said random testing of its water tanks showed that “most samples were contaminated with E. coli”.

There is also regular violence – mostly initiated by those who emerged from Baghouz – towards aid workers, the camp’s administration, its security forces, and other camp residents, many of whom fled IS themselves.

While the vast majority of media attention on al-Hol has focused on what will become of IS wives and children from places like Britain and eastern Europe, these people only make up a small minority in the camp. Around 14 percent of the people at al-Hol are from countries where IS never established a territorial foothold. Of that group, most are from Muslim-majority countries and regions such as Tunisia, Saudi Arabia, and Chechnya. They are held in a highly guarded annex, to which access is restricted.

Most camp residents are from Iraq (45 percent) and Syria (41 percent). Among these people are some of the group’s most hardened supporters, many of whom are likely deeply traumatised and vengeful after witnessing intense fighting and bombing during the campaign to capture cities like Raqqa and Deir Ezzor.

Al-Hol may seem isolated and far away. But the question of what will become of the people here – a group nobody wants because of their past or present ties with IS – has serious ramifications for the future of their troubled home countries and the Middle East as a whole.

‘We don’t know who is going to attack’

Al-Hol was opened in 1991 for Gulf War refugees and re-purposed in April 2016 to host Iraqi refugees and displaced Syrians.

When people began fleeing Baghouz early in the year, just 11,000 people were living in the camp. The influx eventually boosted the population by 860 percent. 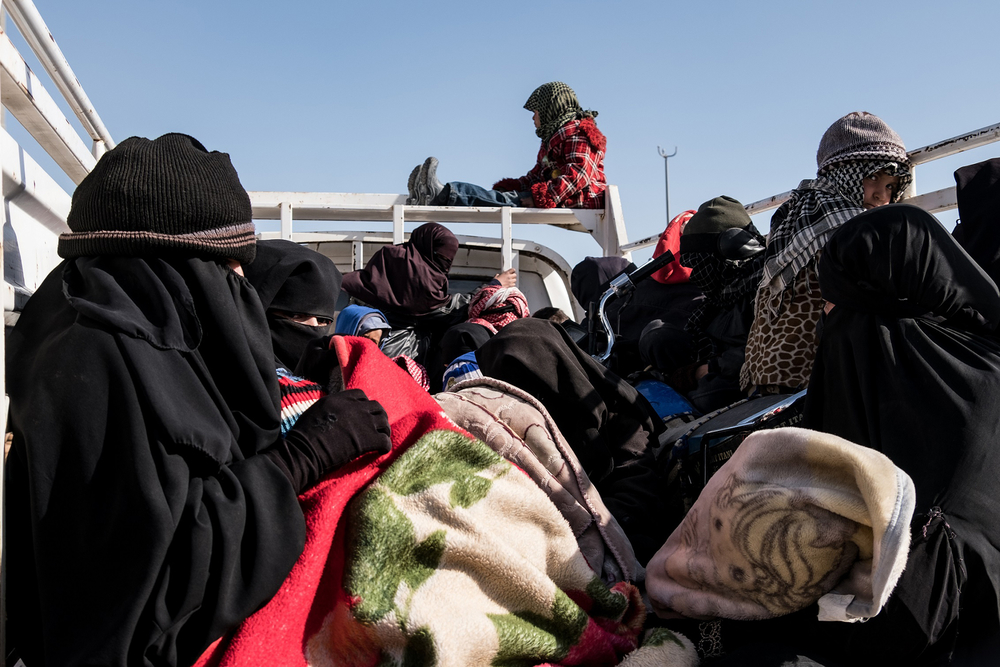 This drastically increased humanitarian needs, as well as the pressure on those in charge of the camp. Al-Hol’s local administrators and security forces are linked to the Syrian Democratic Forces – the US-backed Kurdish-dominated militia that helped fight off IS in Syria, and now controls much of the country's east and northeast.

That means that people who fought IS, including those who lost relatives and friends to the group, are now tasked with servicing and guarding a population that includes people still loyal to the organisation.

It’s a dangerous combination. Self-proclaimed IS supporters in the camp complained to me about disrespectful treatment by administrators and NGO workers, and instances of violence from guards.

Three chatty IS supporters, all related, hosted me in their small tent. They threatened to “set the entire camp on fire” if they were forced to remove their niqabs again. Backers of the group fumed online when new arrivals had to briefly reveal their faces for registration.

“It was easier for us in Baghouz, when we knew who the enemy was.”

Supporters of the jihadist organisation also routinely spread false stories inside al-Hol and on the social media platform Telegram, including of supposed crimes by the camp’s management: tales of organ harvesting, murder, mutilation, even of the kidnapping of children for recruitment into the ranks of the Turkey-based Kurdish PKK militia, which is linked to the SDF.

Despite these blood-curdling rumours, it seemed that the employees and guards in the camp were more afraid of the women and children than the other way around.

On one of the days I was in al-Hol, one of the women in the annex stabbed an armed guard.

Afterwards, members of the SDF’s security in the camp, including intelligence and anti-terrorism forces, complained about the challenges in policing the population. They pointed to the difficulty in distinguishing between true radicals and those who were simply following the directives of hardliners. 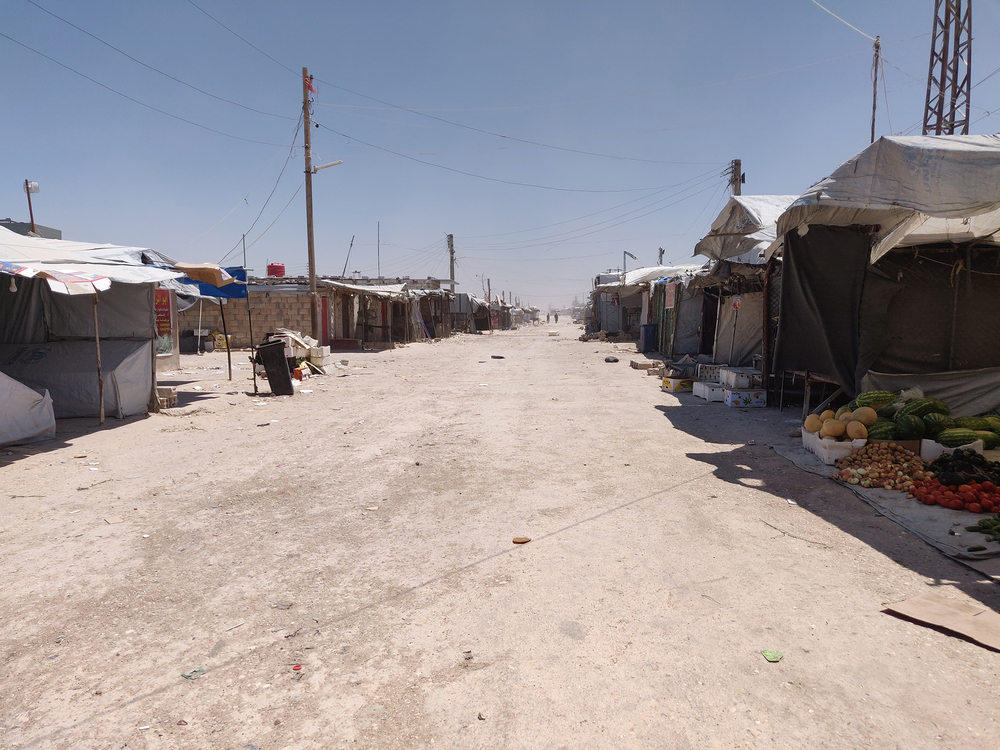 Elizabeth Tsurkov/TNH
The camp's main market was briefly shuttered in July after a camp resident stabbed a guard.

“It was easier for us in Baghouz, when we knew who the enemy was; [men carrying guns]. Here, everyone looks the same under a niqab. We don’t know who is going to attack,” said Abu Samira, a commander in the SDF’s anti-terrorism force in al-Hol.

I spoke to around 40 people in al-Hol, including residents, aid workers, camp employees, and guards. Despite their different perspectives, they all reported feeling unsafe. There is stone-throwing, as well as physical and verbal attacks – largely from women and children who came out of Baghouz.

Many of the women who left Baghouz remain loyal to IS and view the longer-term residents of the camp with disdain, referring to them as “awwam” (“commoners”), the term the group used to describe the local populations under their control.

They also suspect them of working with the camp’s SDF management and security forces, and aid workers and camp residents said women who support IS have threatened suspected collaborators and torched their tents.

Marwa, an Iraqi refugee who fled her home village of al-Baaj, west of Mosul, after it was taken by IS in mid-2014, described how al-Hol had changed since the start of the year: “I had three children in the camp. Our living conditions were good. Then these devils came and ruined it.”

Surrounded by many of her 12 children as she spoke, Marwa, who like all interviewees asked that her name be changed because she feared reprisals from IS, said the new arrivals had attempted to implement IS rules in al-Hol. “They told me to cover my face. They say we are apostates for listening to music [with instruments] on our phones.”

“They call us servants and garbage women,” said Ayesha, 37, who fled IS-controlled Deir Ezzor two years ago and makes a modest living along with her two eldest daughters clearing garbage around the camp.

Her six-year-old son goes to a school run by an international NGO in the camp. HIs dirty-blond hair was cropped short. The family said it was done after children from Baghouz beat him in school, calling him an infidel for his spiky modern haircut.

The mix of poor conditions, disinformation, and violence is not helped by the fact that nobody seems to know what will happen to tens of thousands of people living in al-Hol.

In some Western countries, the plight of the “IS widows” it houses has become a political football and fodder for tabloid headlines.

Iraq says it is planning to bring its citizens across the border, but intends to hold them in isolated camps. The transfer plan has been delayed many times. Elsewhere in Iraq, many relatives of IS members are still unable to go home, years after others – removed from suspicion – have left the tents.

This punitive approach is broadly in line with what dozens of interviewees across Iraq’s northern Ninewa province (which contains the former IS “capital” of Mosul) told me during three visits I made this year: they were supportive of the government’s policy of open-ended internment for the families, and some even called for executing them en masse.

In Syria, people I spoke to tended to be more supportive of reintegration, and in the parts of the country it controls the SDF has adopted a lenient approach, possibly due to a desire to appease the Arab majority now living under its rule. It has allowed hundreds of families from al-Hol to go home, after local tribal leaders agreed to vouch for them.

But according to Syrian women in al-Hol and relatives I spoke to outside the camp, the system of registration for release is riddled with corruption, and families pay hundreds of dollars for a guarantee from a sheikh they may never have even met.

No matter what country they come from, releasing those in al-Hol back into their communities is not without risk. There has been no attempt at deradicalisation in the camp, nor is it a space conducive to it.

Some of the people at al-Hol are true believers and chose, time and again, to retreat deeper into Deir Ezzor with IS rather than surrender to the SDF. Now, the internal policing of “un-Islamic” behaviour, poor living conditions, and false stories are likely increasing radicalisation. In addition, the real and rumoured suffering of al-Hol’s residents is already serving as a rallying cry for IS supporters online.

While it is impossible to know how many people at al-Hol chose to follow IS, and how many were forced to submit to its ideology, tracking of the militants’ Telegram channels and groups show that some camp residents remain in touch with supporters online, and the possibility remains that they would assist the sleeper cells that operate in the region.

But the alternative – prolonged internment in miserable conditions without trial – is not only illegal under international law, but will also ensure further radicalisation. Confinement has led to extremism in the region before. With Iraq still struggling to rebuild after years of fighting IS – and Syria still at war – leaving al-Hol as it is is another gamble not worth taking.

(The author would like to thank Francesco Poldi for creating a script to scrape IS Telegram channels used in researching and writing this report.)

(TOP PHOTO: Women walk towards a part of al-Hol camp that holds Syrian women and children who emerged from Baghouz.)