Roxana Bautista was worried about the health of her six-month-old baby, Keyner. He had been coughing for days, and the previous night he had a fever.

Bautista, 20, lives in Rubio, a town in western Venezuela. But trips across the Colombian border – a one-hour bus or taxi ride away – have become routine.

Keyner was born in Cúcuta, a frontier city in northeastern Colombia that has become not just a first waystation for those leaving Venezuela, but also a vital lifeline for many who remain behind, especially young and would-be mothers seeking medical care.

Almost five million people have fled Venezuela’s economic and political meltdown since 2015. And now thousands of Venezuelan parents like Bautista, who have a child born in Colombia, are queuing up every month, just in Cúcuta, to register their offspring as Colombian citizens so that they can access public services like healthcare and education.

“There are no drugs in Venezuela, no vaccines,” said Bautista, as she waited in line at a health centre in La Parada, the first neighbourhood of Cúcuta you come to after crossing the Simón Bolívar International Bridge that spans the Táchira River and links the two countries. 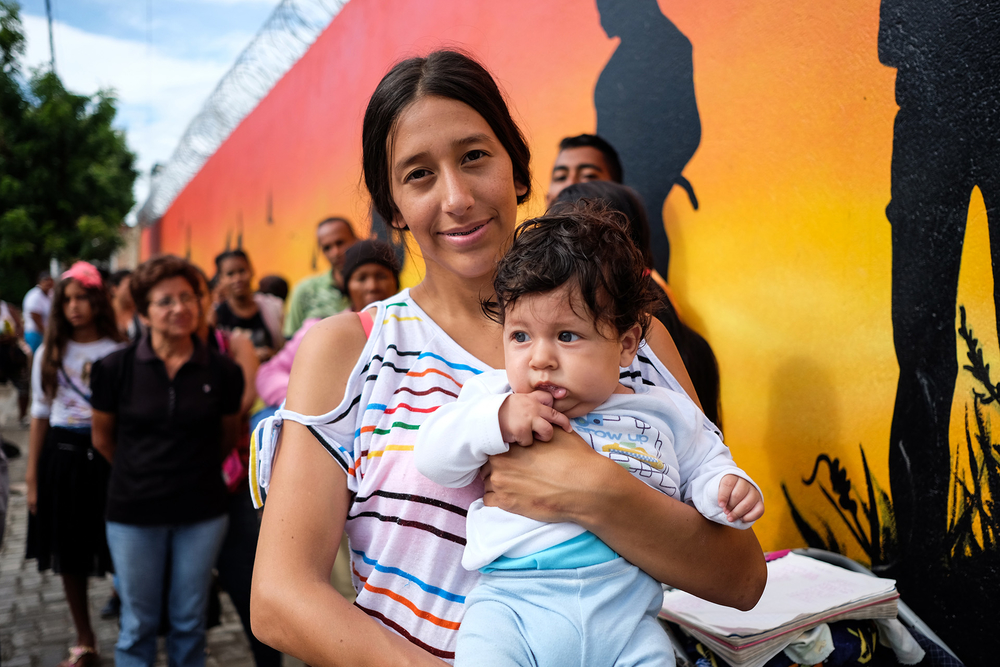 The UN’s refugee agency, UNHCR, offers basic healthcare services here, as do a host of other humanitarian organisations, including the Colombian Red Cross, the Norwegian Refugee Council, and Profamilia, a Colombian NGO.

When The New Humanitarian visited in October, Bautista was looking forward to 20 December: this is when she had an appointment at the Colombian National Registry to officially obtain Keyner’s citizenship.

Keyner was born at the Erasmo Meoz University Hospital in Cúcuta in June.

Bautista told TNH she would not have been attended to properly at the public hospital in San Cristóbal, the main city near Rubio in Venezuela. “They don’t give you any medication and the standard of treatment is bad,” she said. “There are almost no doctors at the hospital.”

The economic crisis in Venezuela has deeply weakened the healthcare system. Drugs and medical staff are in chronically short supply, and patients often need to buy everything for their procedures themselves on the black market, from plastic gloves to gauzes.

The Colombian government estimates that over 27,000 babies like Keyner have been stuck in a legal limbo since the crisis in Venezuela worsened in 2015.

The Colombian constitution establishes that only babies with at least one Colombian parent or whose parents have legal residence in the country are eligible for citizenship.

But for thousands of Venezuelans fleeing their country, obtaining Venezuelan nationality for babies born abroad has also become increasingly difficult. They are often left without the appropriate paperwork or cannot obtain documentation once they are out of the country due to the lack of Venezuelan embassies and consulates in many countries.

This put tens of thousands of babies at risk of becoming stateless.

Aware of the growing scale of the problem – as more children are being born to Venezuelan parents in Colombia every year – the Colombian government passed a decree in August 2019 allowing such children to obtain citizenship. The decree applies to all babies born between 19 August, 2015 and two years after the law was passed: August 2021.

Despite struggling with its own internal displacement – it has the second largest number of IDPs in the world, after Syria – Colombia, unlike some other countries in the region, has kept its doors open to Venezuelans, accepting the biggest influx: over 1.5 million.

And even though Colombia was already struggling to guarantee access to services for all its citizens, the new citizenship measure for Venezuelans received widespread support in the country – from human rights organisations to Colombian public figures and political parties.

“Even though we have a per capita income of less than $8,000, much less than European countries that have confronted migratory crises, we know how to act in brotherhood and a sense of solidarity,” said President Iván Duque when he signed the decree in August.

Bautista believed that regularising her son’s status in Colombia* would make a big difference for his life and, potentially, for the lives of his parents.

“I’ll be able to take him to any care centre here in Cúcuta and they won’t charge me for consultations or anything else,” she said. “Health is fundamental.”

Tirso Cabello, an official at Colombia’s National Registry in Cúcuta told TNH he was “certain” the new law would see these ”vulnerable” children guaranteed new rights. “We are talking about name, identification, health, and, later on, education: access to a dignified life,” he said.

Cabello estimated that a total of 30 babies and children are being registered every day at three registration points around Cúcuta.

The wider border region, Norte de Santander, hosts more than 185,000 Venezuelans – the highest figure after the capital, Bogota – as well as thousands of Venezuelans who still live in their home country but cross the border daily to access services and purchase goods.

Since the decree was passed in August, requests have skyrocketed.

More than 5,000 people have been queuing up on the first two days of each month – those allocated for scheduling – so they can get a date for a registration appointment within that month. Once the schedule is full, people have to come back the month after and wait in line again. Many people sleep in line on the street to try to get an appointment scheduled.

The main registration office used to be set up at a municipal school, in the city centre, but the crowds became unmanageable.

When the situation became a safety and sanitary hazard, the local government opened a new registration point exclusively for Venezuelans in the Prados del Este – a newly constructed sports centre on the eastern side of the city. 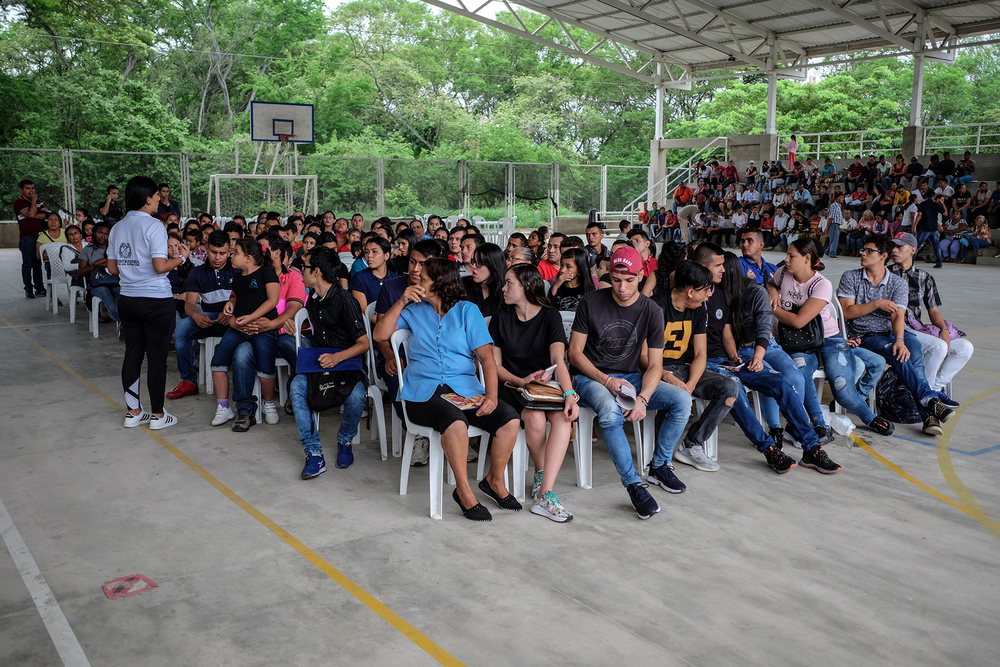 When TNH visited, early one October morning, people were already queueing up for their appointments. Some discarded pieces of clothing lay on the sand, circling around the remains of burnt wood, where people had tried to keep warm overnight on recent scheduling days.

At the centre, 35 people are being registered every day. They are mostly babies born to Venezuelan parents in Colombia and Colombian returnees – Colombian citizens who fled during the armed conflict and lived in Venezuela for years as refugees. UNHCR estimates that over 400,000 Colombians have returned home from Venezuela due to the crisis.

The National Registry is receiving financial support from UNHCR, the UN’s IOM migration agency, and UNICEF.

“This is a very positive and important programme,” said UNHCR’s representative in Colombia, Jozef Merkx. “We are working to ensure that people across the country know about this measure and can bring their children to the registry points to obtain Colombian nationality.”

For the registration of babies born to Venezuelan parents, officials require a birth certificate proving the baby was born in Colombia, known as a “nacido vivo” (born alive). This is issued by all hospitals and healthcare centres in the country.

Parents must also provide proof of their Venezuelan nationality with some kind of document: a passport, a Venezuelan ID card, or a special border-crossing visa card issued by the Colombian authorities will all do, even if expired.

The parents’ legal status in Colombia is irrelevant for the baby’s registration procedure. They only act as witnesses.

“It is a rights-based measure that responds to this humanitarian need,” Cabello said. “The legal regulation of territories should not make us alien, merciless, indifferent to the suffering of others.”

The government official said many women had given birth in Colombia in the last four years due to the lack of healthcare access in Venezuela “without the purpose of obtaining a nationality”.

He said many who had initially taken their babies back to Venezuela are returning – now that their children are a bit older – with their Colombian birth certificates. “They have the right documents, they fulfill the requirements, and we are proceeding to register them,” he said.

It’s not all good news.

The measure has increased disparities among siblings in some Venezuelan migrant families.

For example, Zuliman García, 26, has three daughters. But only her youngest, six-month-old Sofia, was born in Cúcuta. The family lives across the border in Venezuela, but works on the Colombian side.

Valentina, who is two years old, has been feeling down lately due to an ear infection that caused a fever.

García is worried about taking her to the doctor because she was born in Venezuela and does not have access to the public healthcare system in Colombia, like her youngest does.

The family wants to settle down in Cúcuta.

“The girls are stable here; they will be able to study,” García said.

But that’s not the full story. For her two daughters born in Venezuela, it will be a lot harder to get access to Colombia’s education system.

Abarracín had arrived in a rush from Rubio two days before. “I was very scared,” she recalled. “I thought they might not admit me into the hospital or they might send me back home when it was so late [at night] already.” 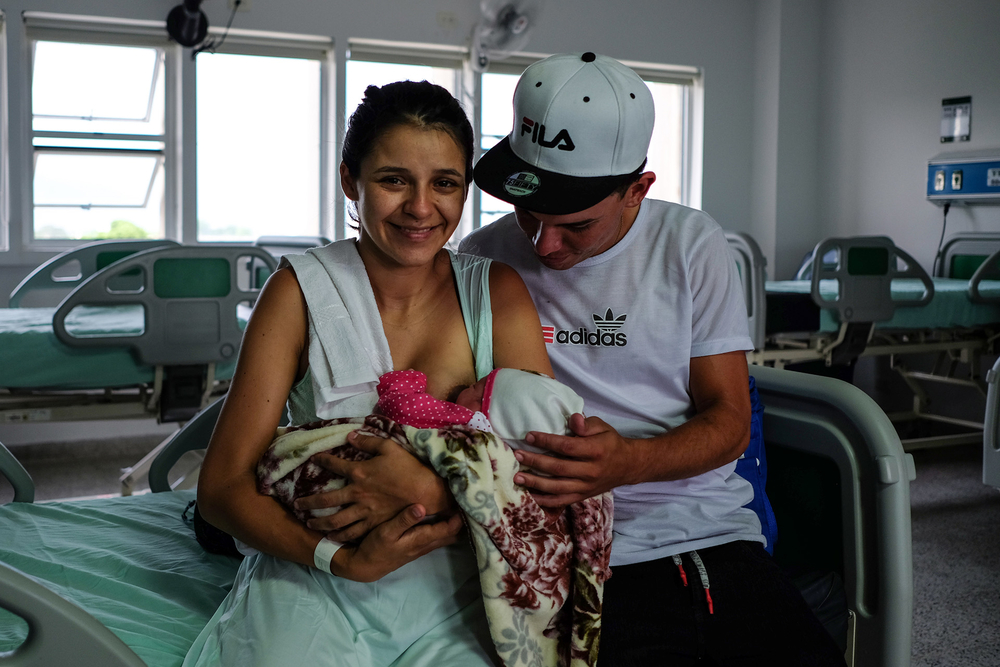 Hilary is María and Mario’s first child, and they were very excited about starting their lives as parents. Because she was born in Colombia after the decree had been passed, Hilary automatically qualified for Colombian citizenship.

María and Mario saw no future for Hilary in Venezuela. “Schools and universities are not the same,” María said. “I could not finish my studies because there was no transportation.”

“A monthly salary only buys you a dozen eggs,” added Mario. “And you cannot eat for a month with a dozen eggs.”

The couple dream about the possibility of moving to Colombia, finding stable work and a house.

Parents of babies who have obtained Colombian nationality can apply for citizenship through an adoption claim – nationality is obtained through the familial link to the child, who is a Colombian citizen. “It is not a territorial link anymore, like it happens with these babies, but they can be adopted later on,” Cabello explained. “Their irregular status can be ‘regularised’.”

Adoption claims, which require far more paperwork and are harder to achieve, are not linked to the newly passed law for babies born in Colombia to Venezuelan parents. They are managed by separate migration authorities.

For the new parents, such problems were for the future, and, in the shorter-term, there was nothing more important than Hilary’s wellbeing. In Mario’s words: “Firstly it’s her, secondly it’s her, thirdly it’s her, fourthly it’s her, and everything is her.”

(*Attempts to contact Bautista again prior to publication to find out how the registration process is going proved unsuccessful.)