Consuelo Parada and her daughter, Eli María, sit in the busy waiting room with several other women about to give birth at Erasmo Meoz, the biggest public hospital in Colombia near the Venezuela border. Almost eight out of 10 children born here are from Venezuelan mothers.

Eli María, pregnant at 17, needs a C-section. Due to the backlog, and the fact she isn’t considered an emergency case, doctors have scheduled the procedure for five days time – what feels to her like an eternity, especially as they’ve already been in the Colombian border city of Cúcuta for four days.

“We are sleeping on the street because we have no money to go back home,” Consuelo tells The New Humanitarian. “If we had money to pay for a hotel, we wouldn’t have endured the downpour we endured last night, sleeping on cardboard.”

They had covered themselves with a bedsheet, but Eli María was freezing all night long. “I say that’s why the baby does not want to be born yet,” Consuelo adds. “Because we are enduring so much cold here, lying on the ground.”

The family lives across the border in San Cristóbal, the capital of Venezuela’s Táchira state, a two-hour drive from Cúcuta. A week ago, Eli María started to bleed and her mother knew taking her to the local hospital was not an option.

“When you go to the hospital in Venezuela, you have to buy everything,” says Consuelo. “I decided to come here because they told me there are good doctors. I don’t regret it. It’s true that they have helped her here.”

After a recent visit to Venezuela, UN relief chief Mark Lowcock stated in early November that the Venezuelan health system “is on the verge of collapse, with many hospitals lacking the most basic water and electricity infrastructure”. Power outages are also common.

Deily Torrado, 29, who gave birth to her second child, Oliver, nine months ago in the Venezuelan city of San Antonio del Táchira, backed up Lowcock’s account and explained how supplies can often only be found on the black market at inflated prices.

“I had to buy everything for the delivery procedure: injections, gauzes, alcohol, adhesive tape,” she said.

Torrado had to spend 50,000 Colombian pesos ($14.5) on medical supplies for her delivery at a public hospital in Táchira. Due to hyperinflation and the depressed economy, the monthly minimum wage in Venezuela can be less than $1. A delivery at a private clinic costs between $3,500 and $5,000, way out of reach for all but the very richest Venezuelans now.

“The whole [Venezuelan] healthcare system is destroyed,” said Magdymar León, psychologist and executive coordinator of the Venezuelan Association for an Alternative Sexual Education, or AVESA, a local Venezuelan nonprofit. “Pregnant women are leaving the country to access dignifying services to give birth, and also to have abortions.”

A spokesperson from the Venezuelan health ministry told TNH that pregnant women have free access to prenatal and delivery care at public hospitals. But all the women TNH spoke to in Cúcuta said the only prenatal care available in Venezuela costs around 30,000 Colombian pesos ($8.7 USD) a visit.

The health ministry spokesperson said medical supplies and drugs – provided by Venezuelan pharmaceutical companies and some UN agencies – were being distributed by the government, and insisted they were absolutely fulfilling public demand inside Venezuela.

Erasmo Meoz is not alone. Colombian healthcare centres spread along the border report double- and triple-digit increases in the number of babies being delivered from Venezuelan mothers in the past two years.

Driving up pregnancies in primarily Roman Catholic Venezuela is the lack of contraceptives. With shortages of birth control methods between 80 and 90 percent, according to a recent report by Venezuelan NGOs, women are not able to make decisions over their own bodies.

The Venezuelan government has issued no official data on pregnancies since 2016, but the United Nations Population Fund states that adolescent pregnancies in the country have increased by 65 percent since 2015.

In Pictures: The Erasmo Meoz hospital

Thousands of pregnant women are fleeing Venezuela every month on foot, hitchhiking or on buses – even when they are seven or eight months pregnant – because they are afraid of giving birth in their home country.

Between April and June 2018, the Colombian government conducted a one-time census to gather more information about Venezuelan migrants entering the country and found that over those three months 8,209 pregnant women crossed the border through official entry points.

Profamilia, the main reproductive rights organisation in Colombia, has already attended to over 800 abortions of Venezuelan women in 2019 – compared to 364 abortions in 2018 and 26 in 2017.

Venezuela’s abortion law is among the most restrictive in Latin America. There is no official data on illegal abortions, but recent reports from hospitals in Venezuela have suggested an increase in both abortions and maternal deaths due to unsafe abortions.

Doctors and NGO representatives in Cúcuta voiced concern over malnutrition in pregnant Venezuelan women, and those who had recently given birth spoke of the lack of access to food in Venezuela. The UN has said this is causing serious health problems for both mothers and newborns.

Malnutrition, lack of prenatal care, and the strenuous journeys to give birth outside Venezuela, mean over 60 percent of Venezuelan pregnancies in Colombia and other countries in the region are considered high-risk, according to the Organization of American States (OAS).

These high-risk pregnancies cause additional challenges and costs for hospitals like Erasmo Meoz that are left to deal with the massive influx of Venezuelan women looking for a safe place to give birth.

“If a pregnant woman has not had access to any prenatal care, you have to get a sonogram, you have to perform laboratory exams, you have to give them vitamins and medication,” Erasmo Meoz director Juan Agustín Ramírez explained.

“Usually, the outcome of those pregnancies is a premature newborn with low birth weight that requires an intensive care unit,” he said. “This generates bigger expenses, and obviously it is concerning for the healthcare sector and for our economy.”

Erasmo Meoz, which depends on Colombia’s health ministry for funding, is in desperate need of additional funds. The hospital’s services are badly strained. It has only 75 beds available for emergency patients, but is attending to between 150 and 200 people per day. 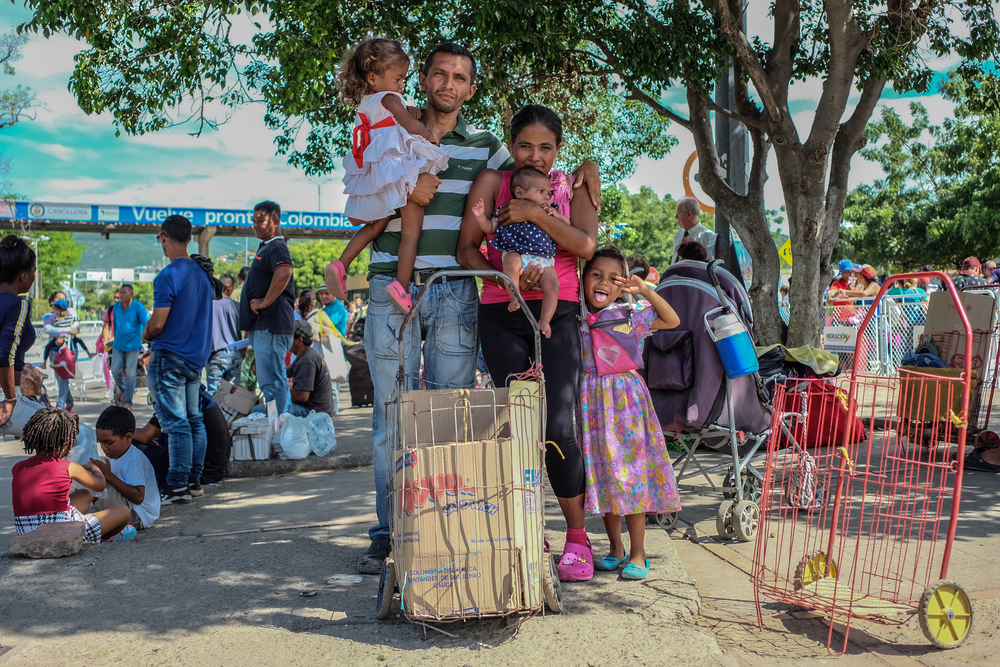 Marta Martinez
Zuliman García, 26, left Guarico in central Venezuela eight months ago, when she got pregnant with her third child. She had heard about a baby who had died because of lack of oxygen and she got scared.

“This is very serious for us, because it indicates that there is definitely a collapse of the public healthcare system in Venezuela,” Ramírez said. “The majority come to have their children here, but they also come without any kind of prenatal [care].”

More than one in five of the Venezuelan women giving birth outside the country are, like Eli María, minors, according to OAS.

Eli María did not want to get pregnant. “It was unexpected,” she says.

Her boyfriend, who is also 17, used to get her birth control pills on the Colombian side of the border, where he worked as a street vendor selling sweets. A month after her doctor recommended that she stop using the pill, she got pregnant.

Eli María did not like studying very much, but her plan was to graduate high school next year. Everything changed when she got pregnant. “Now, I have to take care of my baby,” she says.

Despite all the challenges, Consuelo is hopeful. “Her life is just starting,” she says. “She is bringing my granddaughter into the world and we are proudly waiting for her, but the truth is, we need help.”

On the fifth floor of the hospital, mothers rest with newborn babies in their arms or wait for them to get out of the intensive care unit.

Erasmo Meoz is an emergency hospital and does not offer postnatal care. When births are performed without complications, women aren’t admitted for more than 24 hours because of the high demand on beds. They are then left to fend for themselves.

It is not uncommon for babies from Venezuelan mothers to be born with malformations – due to malnutrition and/or a lack of vitamin supplements during pregnancy.

Sexually-transmitted diseases – due to the lack of condoms – are also on the rise. “We are seeing cases of mothers with syphilis and neonatal syphilis, which is something we had not seen in a very long time,” said Ramírez.

If the flow of patients from Venezuela keeps growing without additional aid, Ramírez worries that Erasmo Meoz might not be able to attend properly to Colombians – the ones paying for the public healthcare system with their taxes. “What we spend on Venezuelans affects Colombians as well,” he said.

At Erasmo Meoz, doctors don’t look at the patients’ nationality when they have to prioritise treatment – they look at the gravity of their health condition.

The hospital director told TNH he had noticed some “symptoms of xenophobia” already.

Pregnant women from Venezuela are increasingly facing public rejection as well, even from some influential figures.

Prominent Colombian journalist Claudia Palacios published a column asking Venezuelan women to “stop having children” and warning that if they keep reproducing at this pace, “it will be even harder to see them as an opportunity for development than as a problem”.

The article generated a lot of controversy in the region, where xenophobic attacks against Venezuelans have spread from Argentina to Peru to Ecuador.

Ramírez noted that a lot of international aid from UN agencies and other humanitarian organisations had landed in Cúcuta in recent years, but said the health programmes, in particular, had fragmented the response and made it less effective.

There should be a “more integrated management of healthcare”, he said, calling on Colombia’s national government to align the work of NGOs better and channel the money where it is needed. Erasmo Meoz, he said, had seen little investment from international aid.

“In one way or another, this hospital is a release valve for this social bomb in this district, and in the country as a whole,” he said. “We are mitigating the problem. The million-dollar question is: what would happen if the hospital didn’t exist or closed its doors?”