South Sudan is meant to form a power-sharing government next month to end five years of civil war. But there’s growing concern the deal may be delayed, spelling further hardship for a war-weary population and stalling the release of thousands of children press-ganged into the country’s armed groups.

Peace negotiators have missed a series of key procedural steps towards the scheduled creation of a coalition government on 12 November, including the formation of a unified national army and securing agreement on the number of states the country is divided into.

As a result, the main rebel group, the Sudan People's Liberation Movement-in-Opposition (SPLM-IO), warned this week that it will not join the new administration until all outstanding issues are ironed out.

Should the peace agreement be delayed or, in a worst-case scenario, fail entirely, it would deepen the suffering of millions of South Sudanese already displaced and made hungry by the conflict.

It would also be disastrous for the 19,000 children that UNICEF estimates remain in the ranks of either the South Sudanese army or in the rebel groups the government has been fighting since 2013.

Over the past five years, just over 3,000 children have been released by the various rebel groups. But since a ceasefire was agreed last year, the forced recruitment of child soldiers has been on the rise as both the government and rebels seek to swell their numbers – increasing their leverage – ahead of the formation of a unified army.

‘We had to ambush, attack, and kill’

Abducted or coerced to join, many of these children have been brutalised by a conflict that has witnessed shocking human rights abuses. Girls, who typically serve as cooks and porters, face the additional threat of sexual violence and exploitation.

Just how damaging those experiences are is underlined by Médecins Sans Frontières, which found that 40 percent of the 932 children released by rebel forces in the southwestern Yambio area last year had acute mental health needs, including post-traumatic stress disorders.

That is nearly double the prevalence rate for mental health problems associated with general conflict-affected populations, according to the World Health Organisation.

“To become soldiers, the children were trained to be aggressive and they were exposed to the most cruel treatment,” said Luciano Canchelara, manager of MSF’s mental health programme in Yambio, which diagnosed and then treated 350 former child soldiers.

Richard*, now 18, was abducted four years ago and became a bodyguard to Victor Wanga, a commander of the rebel South Sudan National Liberation Movement, commonly known as the “Arrow Boys”.

“I can’t forget. I keep remembering the horrors I did and saw. It was too much,” he told TNH.

“We had to ambush, attack, and kill.”

“This is a very important part of the treatment, providing them with a space where they can use their creativity, spend time with others, and express themselves in a way that gives them the opportunity to recover some of their interrupted childhood,” said Canchelara.

Mobile clinics were also set up in the community so MSF would be aware if problems flared up involving the children. “We also provided counselling for parents and care-givers,” Canchelara added. 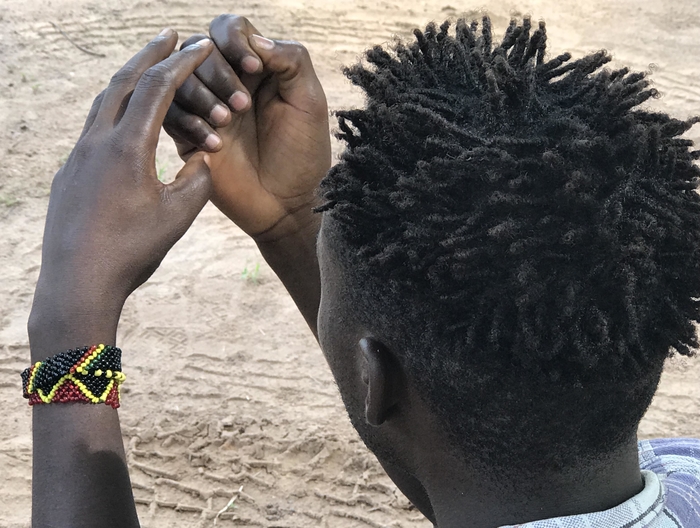 Stigma is particularly hard on girls and young women, who may have survived the trauma of abuse only to then face the double ordeal of a community’s cold shoulder – especially if they return with children conceived during their ordeal.

“Life was difficult in the bush,” said Patricia*, 17, as she nursed her one-year-old son – the result of a forced marriage to a rebel soldier. “We spent days without eating. We were all the time scared of being attacked and killed.”

Her mission was “spying on the enemy [government troops]” as well as “carrying food for long distances after attacks and cooking”, she told TNH. “I would feel much pain at night because of all the hard work.”

Patricia was kidnapped at age 13 and forced to join the rebels, along with her 11-year-old sister.

MSF ended its child soldier programme in Yambio in June. The children were then passed on to other aid agencies – with the exception of seven found to have serious psychiatric needs – and enrolled in vocational training and other development-minded initiatives led by the charity World Vision.

The child soldiers MSF worked with were in a sense fortunate: for so many more trauma survivors in South Sudan’s wider population, access to mental health and psychosocial support – known as MHPSS – is extremely limited.

In the entire country there is just one ward with 12 beds served by a lone psychiatrist based in Juba hospital, and no trained psychiatric nurses. What mental healthcare there is tends to be focused on less specialised community-based support.

“There is basic counselling, but beyond that, there are huge gaps in psychological and psychiatric assistance for entire communities that we know have faced extreme levels of violence throughout times of conflict and also live in precarious conditions,” said MSF’s communications coordinator, Laura McAndrew.

South Sudan’s overall humanitarian needs are huge and underfunded. Aid agencies struggle to provide basic support to more than seven million people in need, with donors so far providing only $578 million of the $1.5 billion requested this year.

Lack of a plan

“Mental health is seen as a luxury,” McAndrew told TNH. “The most pressing needs are the ones that are visible. If you have people dying from malaria, pneumonia – tangible illnesses – that’s what you throw your money at.”

But there’s no simple divide between mental health and other humanitarian needs, said psychologist Melodie Safieddine, explaining that whenever there’s a humanitarian emergency, “you know something bad has happened, so there is potentially trauma there as well.”

Despite the evidence that mental health and psychosocial wellbeing are linked to humanitarian recovery, “those who provide funding are influenced by the same stigma [as in wider] society,” WHO communications officer Collins Boakye-Agyemang told TNH. “They often do not see mental health as an area to be funded.”

For Rosalind Crowther, CARE’s country director, that prioritisation problem means that one of the major pots of donor money – the South Sudan Health Pooled Fund – does “not have MHPSS indicators in their projects and therefore NGOs do not prioritise these services.”

The lack of an overarching strategic plan to address mental health and psychosocial support is a major drawback. “A strategic plan would define the needs and roles of the different actors such as health, education, and protection,” noted WHO’s Boakye-Agyemang.

Both Boakye-Agyemang and Safieddine pointed to the lack of standardised “best practice” in the MHPSS projects implemented in South Sudan, and warned that poor standards can do more harm than good.

“I’ve seen some [group therapy] role-playing games where the topic was anorexia!” said Safieddine. “The consultant had found it on Google and thought that was appropriate for South Sudan. Nobody is checking the quality.”

Monitoring and oversight is needed “to ensure the delivery of acceptable and evidence-based interventions,” said Boakye-Agyemang. Data-driven research could also help build a case with donors for more proactive interventions, he added.

People, children included, are fundamentally resilient when safety and routine can be re-established, said Safieddine.

Trauma is also not uniform. Child soldiers recruited to defend their communities rather than to raid and attack others can view themselves more heroically and less as victims.

Key to recovery is the strength of people’s social networks, the “nurturing physical and emotional environment that includes – and extends beyond – the immediate family to peer, school, and community setting,” argue researchers Theresa Betancourt and Kashif Khan, who did pioneering work among child soldiers in Sierra Leone.

But that is difficult to achieve in ongoing conflict conditions like South Sudan, where communities have repeatedly been forced to flee. You can, however, “give people some tools to try and make it better”, said Safieddine.

Some aid agencies are increasingly training members of at-risk communities on “psychological first aid” – a self-help approach approved by the WHO a decade ago. It is a bare-bones response that typically works through community leaders, helping them identify those in need, showing them how to provide some immediate comfort and assistance, and then connecting the vulnerable to information and services.

“In places where specialised mental health services are almost non-existent, psychological first aid can be one of the main tools to provide basic psychosocial aid, aiming at reinforcing the resiliency of the population,” said Safieddine.

(*Names have been changed to protect the identity of the interviewees.)