It has been more than a year since government soldiers attacked Mary Poni’s house in the South Sudanese town of Yei. They raped her elder sister and decapitated her father – part of a harrowing string of events that would eventually push her to attempt suicide, twice.

“I don’t sleep,” 25-year-old Poni said in the capital, Juba, where she now lives. “Whenever I try closing my eyes, I see my dad’s head falling before me.”

Since December Poni has received some psychological support, not as part of an organised programme but because she showed up – along with several other traumatised people – at the offices of Humanity & Inclusion, an NGO formerly known as Handicap International.

Five years of civil war in South Sudan have not only killed almost 400,000 people, they’ve also left a nation of traumatised survivors in their wake – millions of them displaced and living in camps or squalid conditions that add to the mental and emotional strain.

The government, reeling from the day-to-day fallout of the war and political dysfunction, offers little to no support. The entire mental health programme for a country of more than 10 million people relies on one hospital ward equipped with eight beds and served by one psychologist.

Less than two percent of nationwide funding is put towards the health sector, and no money is specifically allocated for mental health services, according to Dr. Felix Lado Johnson, the state minister of health in Juba.

Earlier this month India committed to building the country’s first mental health centre, but construction on the project, which will treat patients and train staff in Juba, has yet to begin. The Indian embassy wouldn’t comment on an expected date of completion.

In the meantime, the burden falls on humanitarians.

Read more: South Sudan: The humanitarian toll of half a decade of war

Koen Sevenants, a doctor in psychology who leads the mental health and psychosocial support network in South Sudan on behalf of the International Organization for Migration, said that 76 agencies including the UN and international and national aid groups are involved in initiatives across the country.

Informal support also exists, like the sessions Poni attends. Humanity & Inclusion psychologist Melodie Safieddine explained that she usually treats NGO workers, but when people arrive at her clinic in Juba in search of care, she tries to help the ones she can. 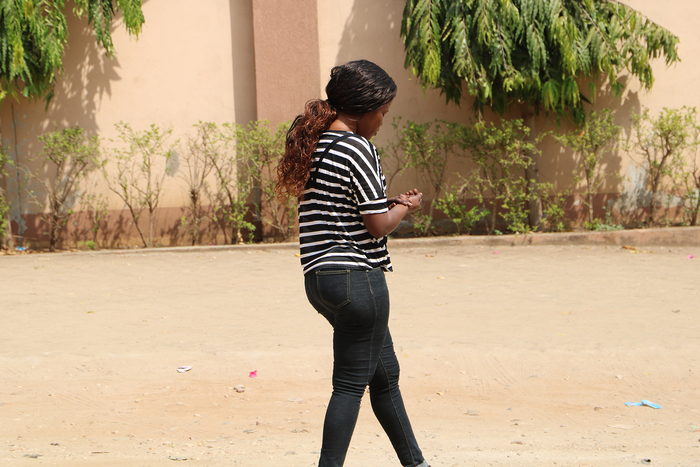 Decades of fighting within Sudan caused widespread psychological distress even before the South gained independence in 2011. But the civil war that began in 2013 led to a large increase in the number of people dealing with mental health conditions, according to a 2016 report by Amnesty International.

The country has no official mental health data, but a 2015 study by the South Sudan Law Society and the United Nations Development Programme reported that more than 40 percent of people surveyed across six states showed symptoms consistent with post-traumatic stress disorder, or PTSD. Aid group Médecins Sans Frontières documented more than 51,500 people seeking psychosocial support in 2017, a 35 percent increase from 2016.

Psychologists warn that years of conflict have normalised violence and death to an extreme degree, threatening people’s moral framework and mental health for the foreseeable future.

“The level of disaster is enormous,” said Sevenants. “The consequences of what’s happening will be felt for the whole generation of kids growing up.”

Anthony Feinstein, professor for the department of psychiatry at the University of Toronto and Sunnybrook Health Sciences Centre, believes stunted developmental growth as a result of persistent trauma could even have far-reaching effects on South Sudan’s future leaders.

“There will be those whose development has been scarred by war and conflict and their political decisions may well be influenced by this,” he said. “Decisions that are emotion-based may lack rationality, which… can generate further discord and conflict.”

‘I cried for death’

For Poni, the past year has been one devastation after the next. After her father was murdered, she escaped with her four sisters, leading them out of town towards the village where she thought it would be safer, rather than joining the thousands fleeing across the border to neighbouring Uganda. But on the way, the girls were brutally attacked by five government soldiers who tied them down and systematically gang raped each one until they bled, Poni said.

“I cried for death,” she said, recounting how several hours later their five bloodied and beaten bodies were rescued from the bush by the driver of a passing truck, who took them to a nearby church. But Poni’s three younger sisters were too badly injured and all died in the chapel. The youngest was 13 years old.

Since their deaths Poni has blamed herself for leading the family into the village instead of going straight to Uganda. “That’s why they were raped and killed,” she said.

Safieddine, who has been treating Poni, said this “blame effect” is common in South Sudan because of the nature of the attacks. “People are seeing their perpetrators directly; they’re facing it,” she said.

“The level of disaster is enormous. The consequences of what’s happening will be felt for the whole generation of kids growing up.”

In her previous work in Afghanistan, many of the trauma patients had survived car bombs and explosions, but Safieddine said the majority of those in South Sudan had experienced something more intimate and personal, including abductions, being held at gunpoint, and the rampant use of rape as a weapon of war.

Witnessing someone be sexually assaulted or beaten perpetuates a feeling of helplessness because people are watching things they can’t do anything about, explained Safieddine. These attacks also take more time, which means people have longer to think about it while it’s happening.

Safieddine has treated about 20 non-NGO patients in the past 18 months. She says half have stories similar to Poni, whom she has diagnosed as suffering from PTSD, following the devastating events in her life.

After Poni’s three sisters were killed, she and her surviving sister sheltered in the church for two weeks, until they decided to flee for Uganda. They walked for seven days through the bush; but then, right before crossing into safety, they were attacked and gang raped again by government soldiers, she said.

During the attack Poni said she witnessed an elderly woman being shot and killed in front of her, and watched as soldiers ripped an unborn baby out of a pregnant woman’s womb and chopped it to pieces as the mother also died.

“This is not humanity. It’s insanity,” she said.

Of around 50 people who set out from the church in Yei in December 2017, Poni said, only 11, including her and her sister, made it across the border to Uganda alive.

Once inside Bidi Bidi refugee camp in northern Uganda, something inside Poni snapped.

Traumatised, bitter, and distrustful of everyone, especially men, she retreated into herself.

She said she began to label any man who crossed her path as a rapist. She was also guilt-ridden for being unable to save her sisters. During her 12 months in the camp, she tried to commit suicide twice – the first time on malaria pills, the second by drowning in a lake. 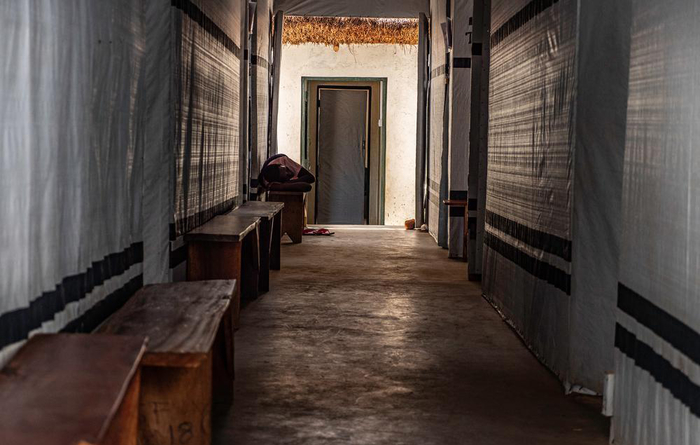 Geraint Hill/MSF
After seeing their villages and families destroyed, tens of thousands of South Sudanese, including Mary Poni, fled to camps in northern Uganda for safety.

MSF says mental health issues are often compounded when people are forced to live in squalid conditions with a lack of future prospects, like in refugee or internally displaced persons camps.

Almost 200,000 people currently shelter in six UN ‘protection of civilian’ sites across South Sudan. Last January, MSF reported a spike in the number of attempted suicides in the Malakal site, which is home to almost 30,000 civilians. Eight to 10 people tried to kill themselves each month, 80 percent of whom were under the age of 35. While the number has now stabilised at approximately three to four attempted suicides monthly, MSF says things will only change if the underlying factors are addressed.

“The lack of employment, the lack of prospect, the living conditions: these are the triggers for the mental health problems,” said MSF medical coordinator Endashaw Mengistu Aderie. “Dealing with those requires more than what we are doing. It requires stepping up efforts to provide services for the population.”

“You can’t rebuild the country without rebuilding the mind and the hope.”

However, issues like mental health are way down the priority list in South Sudan. Against the backdrop of collapsed markets in a devastated, war-torn economy, combating hunger and beating back famine takes precedence.

More than five million people already face severe food insecurity, 36,000 of whom are on the brink of starvation, according to the latest analysis by the government and the UN.

South Sudan is also struggling to fund the implementation of last September’s peace deal, while fighting still persists in pockets across the country. During the first week of January, 19 people were killed by armed men in the town of Katigiri, not far from Juba, with warring parties blaming each other for the attack.

A few local counsellors do have some mental health training but it isn’t always enough to ensure that people experiencing trauma get the right support and advice.

Safieddine of Humanity & Inclusion recalled how a social worker she knows told a rape victim it was okay because a lot of women are raped and it might happen to her again. She recalled another local counsellor couldn't understand why her patients didn’t want to return after she put the perpetrator and the survivor of sexual assault in the same room so they could hold hands and pray.

Together with other trauma experts Safieddine is concerned for the country’s future if more isn’t done to help this generation of traumatised survivors of war and violence. “You can’t rebuild the country without rebuilding the mind and the hope,” she said.

‘We all really need help’

After almost a year in the refugee camp in Uganda without assistance, Poni heard from a friend about Humanity & Inclusion in Juba and made the risky journey back to South Sudan to try to get psychological help. Since December she has been working with Safieddine to try to overcome her guilt and stop the disturbing cycle of thoughts in her head.

“The one thing that’s changed my life entirely is (when Safieddine told me) ‘don’t blame yourself because it was not your fault’,” said Poni. Shifting the narrative has helped liberate her mind and for the first time in a year she began socialising again and attending church. She is also experimenting with art therapy and trying to help others.

Last week, while walking to her counselling session, Poni encountered a troubled government soldier, bought him a bottle of water, and gave him some money to feed his starving family. She said he told her that “if he finds a quiet place, he’s going to shoot himself so he can rest”.

It wasn’t easy for her to assist a man she used to regard as complicit with those who butchered her father and raped and murdered her sisters, but Poni said she did it out of human kindness. “The whole country is traumatised,” she said. “We all really need help.”

(TOP PHOTO: Since civil war began in 2013, people have been subjected to brutal violence and no real support system to help them deal with the trauma. CREDIT: Dominic Nahr/MSF)