This article is part of our in-depth coverage. Read more like this...
YEI, South Sudan

Once known as the country’s peaceful breadbasket, today the backdrop of rolling hills in South Sudan’s Equatoria region is contrasted by a string of ghost towns, abandoned shops, dilapidated houses, and roads littered with bullets and burnt-out cars.

A fragile peace deal signed in September brought a few months of relief as fighting largely subsided across the country. However, since the beginning of the year violence has escalated between government forces and parties who refuse to accept the agreement – some of them calling it, according to rebel leader Thomas Cirillo, a “betrayal” of the South Sudanese people.

Reports of abductions, ambush, rape, the burning and looting of property, and the killing of civilians have become rife in the last two months.

Read more: The humanitarian toll of half a decade of war →

Thousands of people are now displaced in Central Equatoria in what a February report from the South Sudan Civil Society Forum referred to as a “war on civilians”. Thousands more have fled across the border into the neighbouring Democratic Republic of Congo.

Increased violence is also hindering the ability of aid groups to access vulnerable people, with many hiding in approximately 44 different areas in the forest and an estimated 23,000 people around the Central Equatoria town of Yei unreachable, according to the UN. 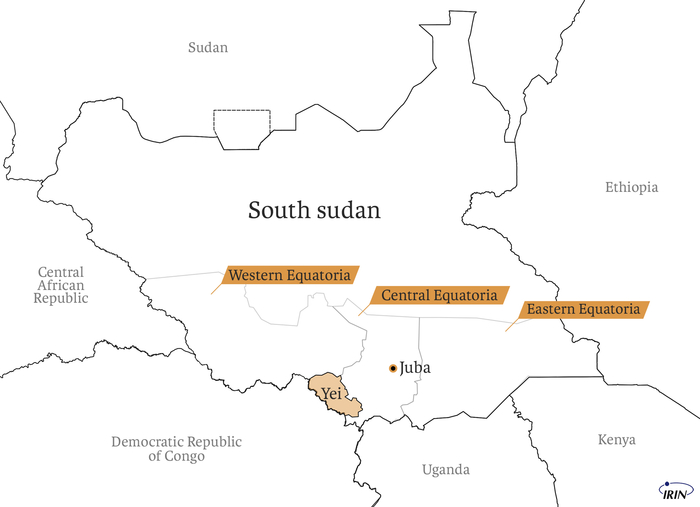 “Until all parties stop armed conflict and adhere to the ceasefire, access is going to be compromised because it’s going to be too dangerous for humanitarians and beneficiaries to deliver and receive humanitarian assistance,” said Sarah Vuylsteke, up until recently the deputy head of access for the World Food Programme in South Sudan.

In the most dangerous country in the world for humanitarians, 20 percent of security incidents against aid workers have taken place in Central Equatoria. Humanitarians are concerned that if fighting continues the situation will get worse, especially when it comes to food security.

☰ Read more: The most dangerous country for humanitarians

For the third year in a row, South Sudan is the most dangerous country in the world for aid workers, according to research by Humanitarian Outcomes. At least 112 aid workers have been killed since the start of the conflict, said the UN. Thirty-five humanitarian access incidents were reported in January and the number of bureaucratic impediments, such as delays at entry points and road blockages, nearly tripled from 2018.

Before December, aid groups were able to move freely in Yei. But since January they’ve been forced to travel with military escorts in armoured cars. For the first time since the war erupted in 2013, OCHA is using a bulletproof vehicle for travel outside of Yei, said Siryon. Only two humanitarian convoys have been able to leave the town since the start of the year.

Humanitarian access works on trust, which involves knowing who to speak to and establishing relationships with the various groups, said the World Food Programme’s Sarah Vuylsteke. But recent fighting has created an unpredictable environment of shifting front lines, which makes it hard for aid groups to know who’s in charge in order to negotiate access.

Last month, IRIN joined the second humanitarian mission outside of Yei this year, in which the UN tried to alert both the government and the rebels of their trip to Tokori village near the Congolese border. Less than 10 kilometers from Yei the convoy was stopped by one of the rebels’ pop-up checkpoints. Eight National Salvation Front, or NAS, rebel fighters emerged from the bush, surrounded the cars with AK-47s, and halted the procession.

“We can’t trust you,” said the group’s young leader who referred to himself as “Madam Peter”. He scolded the mission for not alerting the rebels of their travel plans. After 20 minutes of tense discussions the rebels let the convoy through with a warning.

The volatile security is compounded by weak telecommunications. Last year the main telecoms company operating in the Equatorias was shut down, making it nearly impossible to communicate. The rebels, who conduct guerrilla warfare from the bush, can only connect with satellite phones, yet few fighters have access to them and those who do struggle to keep the phones charged, said Siryon of OCHA.

At least one local aid group, the South Sudan Health Association, which operates in remote locations in the region, sends handwritten letters to rebel leaders. The notes, which detail the day the aid group wants to come and what they intend to bring are sent with locals on motorbike.

“NAS trusts us because we respond when they write,” said Herbert Male, the organisation’s health supervisor.

But even with assurances, humanitarians are still at risk. Last month Male and his team were ambushed by rebels while driving on the Yei-Juba road, forced out of their car and made to lie face down in the dirt until the commander set them free. In March 2018, Male was kidnapped for three weeks by opposition forces, threatened with death, and forced to do hard labour until the UN negotiated his release.

Across South Sudan, more than six million people face extreme hunger, 45,000 of which are in catastrophe at risk of starvation, according to a report released in February by the UN and South Sudanese government.

For its part, South Sudan’s government has downplayed the uptick in violence, insisting that the population influx in Yei is not a result of fighting but rather people’s desire to return home.

“It’s a sign of peace that people are coming back,” said Yousto Baba Lukudu, deputy governor of Yei River state. In February, government officials in Yei hosted a peace rally in its central square, while in stark contrast across town thousands of desperate and hungry recently displaced people lined up to register for food aid.

Several locals in Yei told IRIN that the government is trying to cover up the violence in order to appear in control and not be accused of violating the ceasefire.

Almost six months into South Sudan’s peace deal, which has been riddled with delays, missed deadlines and violations, the momentum has stalled and the international community’s patience is fraying.

In a statement last month, the US, the UK, and Norway – the so-called troika, which helped usher South Sudan to independence in 2011 – said it was “alarmed” at the escalating fighting around Yei and concerned that if the situation continues any progress made in implementing the peace agreement could be “irrevocably set back”.

The Catholic Bishops of South Sudan released a statement last month saying they were extremely concerned about the state of the peace deal, noting that all parties were either still involved in active fighting or preparations for war. “There is a sense of hopelessness that this agreement, like so many before it, will not succeed,” it said.

On a trip to Central Equatoria at the end of February, IRIN spoke with dozens of civilians who blamed both the government and the rebels for the deteriorating situation.

Joseph Yokuei, 65, had a wound on the back of his head from when armed men he identified as government soldiers beat, robbed, and detained him near the town of Yei.

He was walking from his farm, 24 kilometres out of town, trying to bring food to his family when he was accosted along with 10 other people. “I have nothing now,” he said. 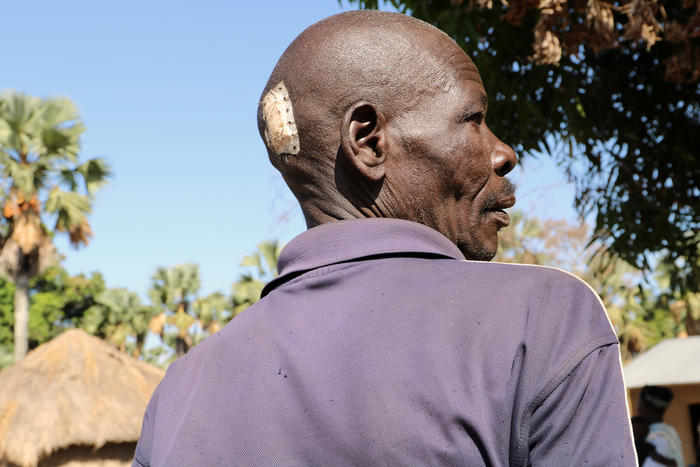 Sam Mednick/IRIN
Joseph Yokuei was beaten and robbed while trying to bring food to his family in the town of Yei.

A month earlier, the family fled to Yei after government tanks attacked their village of Mukaya in search of rebels. They were among the hundreds of displaced people who sought refuge in an overcrowded church in Yei, where they were left for weeks without any food.

Trapped between government forces and rebel fighters belonging to the National Salvation Front, or NAS – one of the non-signatory parties to South Sudan’s latest peace deal – almost 10,000 people now take refuge in five makeshift displacement sites on the outskirts of Yei.

Thousands more have escaped to the bush. While government forces try to weed out rebels from within communities, civilians are bearing the brunt of the fighting, caught between warring parties with little access to food, shelter, or medicine.

“If someone goes from the village to town, the [rebels] say you’re working for intelligence. If you go from town to the village, the government says you’re a rebel. I don’t trust anyone with a gun.”

Seated in a plastic chair under a tree in Wuluturu, a neighbourhood on the edge of town where displaced people are living in abandoned houses, the community leader said he doesn’t care who’s in charge, he just wants to feel protected and free. Last month in the town of Morsak he said he found five bodies thrown into a toilet, and a young woman with her throat slit lying dead on the ground beside them.

The fighting is also preventing people in and around Yei from cultivating their lands. Terrified civilians can’t access their land for fear of being killed or abducted by armed men.

Since the Equatorias are known as South Sudan’s green belt, producing food for the rest of the country, there hasn’t been a robust emergency response in place when it comes to food aid.

“There are only small food stocks in Yei,” explained Dara Elisha, programme manager for the United Methodist Committee on Relief, an international aid group operating in town. “Civilians and humanitarians are not equipped to deal with emergency here.”

WFP conducted a registration last month for displaced people and started an emergency food distribution. So far 635 metric tonnes has been delivered, enough to last 9,000 people for one month, according to a spokesman for the UN’s food agency. 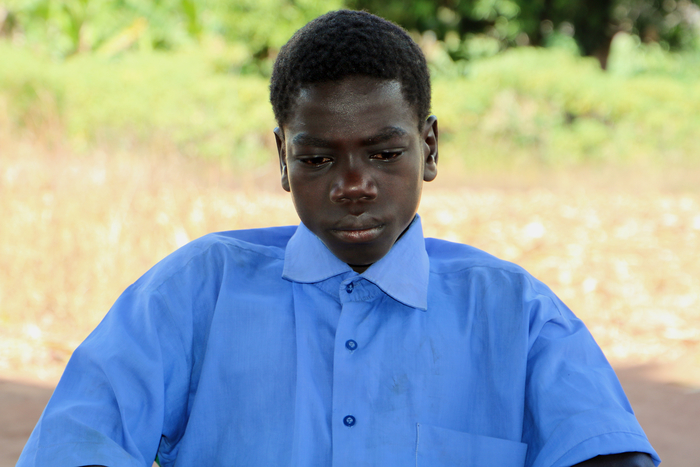 Sam Mednick/IRIN
Peter Yakui sobs while recounting the day government soldiers beat him after attacking his town of Morsak.

Access constraints are also raising fears regarding the spread of Ebola from Congo. Central Equatoria borders both Congo and Uganda, and the International Organisation for Migration has only been able to set up eight out of 18 border screening sites due to instability. Two places along the Congolese border are completely inaccessible.

Congo’s Ebola outbreak is the second deadliest in history and has been ongoing for more than six months in the country’s conflict-prone east. Responders face constant security threats, making it hard to get the virus under control in a busy region with porous borders.

Read more: Inside efforts to prevent a regional Ebola crisis in central Africa →

“We are concerned,” said Stuart Vallis, IOM’s Ebola preparedness coordinator in Yei. “We’re unable to get to the sites to train people and we can’t set up certain sites or get to remote areas.”

The Equatorias were dragged into South Sudan’s crippling five-year civil war when renewed clashes erupted in the capital, Juba, in July 2016, displacing more than one million people in the region.

Despite talk of peace among the country’s leaders, civilians here struggle to remain hopeful.

Burying his face in his shirt, 14-year-old Peter Yakui recounts the day in February when government soldiers stormed his town of Morsak, beating him and threatening to kill him. He narrowly escaped, surviving for weeks in the forest living on wild fruit until he reached Yei. The young boy hasn’t seen his family since the attacks and doubts they’re alive.

Wiping his tear-soaked cheeks with his sleeve, he begged to leave.

“Take me away from here,” he said. “If I stay, I’ll never forget what happened.”