Liberia’s second civil war began 20 years ago last month, but for many the trauma lingers. In a country with no registered psychiatrist, a sociotherapy initiative aims to help thousands of survivors come together to heal the psychological impacts of the conflict.

The two phases of the war, 1989-1997 and 1999-2003, in total killed 250,000 people and displaced more than one million. It also destroyed much of the country’s infrastructure – leaving a legacy of lives scarred by both the conflict and the economic hardship that followed.

The Swedish-funded programme addresses the consequences of traumatic events by encouraging people, who signed up voluntarily, to talk and listen to one another. Participants attend weekly group sessions for four months, led by a trained local facilitator, and talk about their understanding of social values such as safety, trust, respect, and care.

Take Augustine Fayiah, 37. He grew up in Liberia’s northern Lofa County and spent much of his youth serving as a porter for a rebel group. “I can’t remember his name,” he says of his commander. “He put a load on my head and said he wanted to kill me. He fired a gun behind me, but God was with me and the bullets never touched me.”

At the end of the conflict, Fayiah came to the capital, Monrovia, where he believed his parents were sheltering. But he never found them. Instead, he spent the ensuing years “hustling” – taking on odd jobs in order to survive. He found solace in religion and now carries out pastoral work for the residents of Dolo Town, a rural hub 60 kilometres from Monrovia. 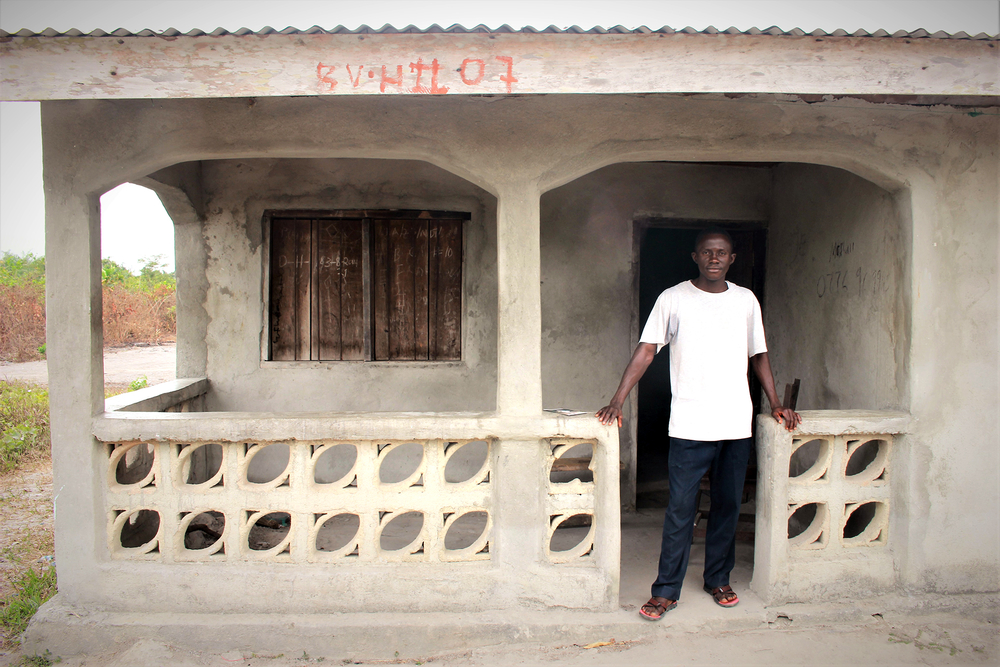 Lucinda Rouse/TNH
After the conflict, Augustine Fayiah moved to Monrovia to find his parents. He never did.

Fayiah feels traumatised by his early experiences. “When the war was over, a lot used to play on my mind,” he says. “I used to see my friends with their parents who cherish them, take care of them well. But for me there was nothing like that.” This led to an outpouring of negative emotions that Fayiah found difficult to control, and he detached himself from his social circle.

Fayiah’s story is by no means unique in Liberia, where trauma has caused widespread mental health problems and behavioural difficulties that can threaten social harmony. Some sufferers, for example, resort to substance abuse, which, as in any society, can lead to interpersonal problems and domestic abuse. Sexual violence is also prolific.

Dolo Town is among the locations chosen for a peacebuilding programme designed to improve social cohesion through community-based sociotherapy sessions.

Run jointly by the international relief organisation ZOA and the YMCA social welfare movement, the programme aims to enable people to live together peacefully by creating a space within communities in which meaningful reconciliation can take place. The concept was first developed by a psychiatrist treating British soldiers after World War II, and has also been used to help survivors of the Rwandan genocide.

“You go more deeply into trauma when you’re in poverty.”

More than 10,000 people, divided into 840 groups across Liberia, are expected to participate by the end of the three-year programme in 2020.

“I am able to control my heart’s desires using what I learned from the sessions,” says Fayiah, who has already taken part. “It’s taught me how to conduct myself properly in the community and stay away from conflict.”

Another community targeted by the sociotherapy initiative is West Point in central Monrovia. It’s a hand-to-mouth existence in this densely populated slum quarter built on sand, where residents are feeling the effects of both coastal erosion and a depressed local economy.

“Economic hardship is a reminder of war,” agrees Daniel Koon. “It leads to more anger and snap reactions.” And economic hardship is unquestionably increasing for Liberia’s poorest, with a rapidly depreciating local currency leading to ever-rising prices for basic goods.

But community-based sociotherapy can offer a way to help soothe social tensions.

Henry Weah, 29, says it taught him “how to behave in the community, in the home and with my family”. Weah runs a store in West Point selling fishing equipment. “I used to have issues with people but now I know how handle them and don’t get into fights,” he says. “I know when it’s time to go and apologise.”

Faith Vinton, also 29, is another West Point resident who has learnt from the sociotherapy sessions to resolve disputes with her boyfriend. 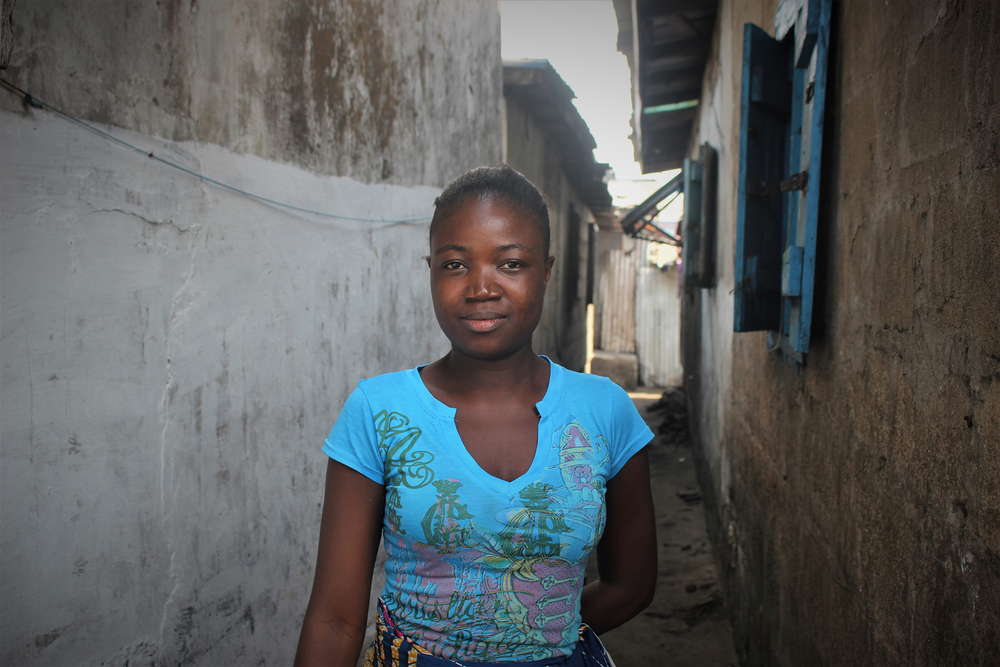 Lucinda Rouse/TNH
Faith Vinton, a West Point resident participating in the peacebuilding programme: "The training gave me some ideas on how to come to a common understanding."

“I used to have problems with him coming home late and it created a lot of confusion between us,” she says. “But the training gave me some ideas on how to come to a common understanding, and I’ve encouraged him to change.”

In March 2018, the UN’s large peacekeeping mission finally withdrew, a seeming vote of confidence in Liberia’s reconciliation effort. But with everyone from President George Weah to human rights campaigners still describing the country’s state of peace as “fragile”, the absence of conflict doesn’t mean society has fully recovered.

Mental health practitioners and social workers identify a range of problematic behavioural and social traits that can be linked back to wartime trauma. Firstly, “there is an absence of trust and an abundance of bitterness and anger,” says Vinah Howard, a social worker in the town of Kakata in Margibi County.

A lack of trust pervades all levels of society: within families, communities and between business associates, not to mention between the government and the people it has been appointed to serve. This latter issue is compounded by high levels of corruption and a sense of impunity, as no one has yet been tried in Liberia for committing war crimes, and known perpetrators continue to enjoy positions of political power.

Secondly, many children during the war found their schooling exchanged for experiences of violence and chaos, which led to the breakdown of social norms. “Before the war, anyone could discipline a child,” says Daniel Koon, another social worker. But this all changed when armed factions turned young boys into soldiers.

“The social hierarchy and respect for elders was destroyed,” he continues. “A child with a gun could order an adult to remove his jeans in broad daylight just because he wanted them for himself, with no repercussions.”

Crisis events can also reawaken old fears. Dolo Town was among the worst-hit communities in the 2013-2016 West African Ebola outbreak and was temporarily quarantined. Such separations were a major setback for social cohesion. “Trust decreased as people were afraid of each other, not knowing who had infected whom,” says mental health consultant Yolanda van den Broek.

Not just the economy

The government’s current development strategy features a pillar called “Sustaining the Peace”, with a focus on justice, reconciliation, and security. Despite this, reconciliation between individuals and communities is “the glue which is downplayed” when it comes to Liberia’s peacebuilding efforts, according to Edward Mulbah, executive director of the national peacebuilding office within the Ministry of Internal Affairs.

Mulbah highlights the need for a combination of political, economic, and social efforts to bring about deeper reconciliation, but believes the current focus is too narrowly restricted to economic empowerment.

“The government says building roads is the means to reconciliation, but it goes far beyond that,” he says. “For genuine reconciliation to take place, strengthened relationships and dialogue are vital.”

Equipping individuals with the ability to resolve low-level disputes before they escalate is important, particularly where trust in the police and judiciary remains low, according to a recent analysis on social cohesion and reconciliation in Liberia.

But, some argue, such initiatives can never replace accountability. Punishing the perpetrators of Liberia’s years of abuse and injustice is, they say, a more empowering path to healing and a genuine consolidation of the peace.

Before being elected, President Weah backed the idea of a war crimes court – as recommended by the country’s Truth and Reconciliation Commission in 2009. But since taking office in January 2018, he has backpedalled.

“We all have different minds and views on this issue,” Weah said in November last year. “Some are calling for a war crimes court; others are calling for reconciliation. What we need to do is to find out what we need as a people.”

(TOP PHOTO: Life continues to be a struggle in West Point, with limited sanitation provision for residents.)