Hours after Cyclone Idai battered the coast of Mozambique last week, it made its way to Zimbabwe, bringing a wave of destruction with it.

More than 139 people have been reported dead in Zimbabwe, but that toll could rise amid reports of nearly 200 missing persons and uncounted bodies swept away by the floods. Some areas – as in Mozambique – remain inaccessible, making it difficult to establish the exact number of people in need.

After a cabinet briefing on Tuesday, local government minister July Moyo told journalists that lessons from this and previous disasters must be learnt.

“A few weeks before Cyclone Idai happened, we already knew the areas that were going to be affected, but we didn’t know the intensity,” Moyo said, adding that provincial and district leaders had been warned in writing, but most people did not heed the call to move.

But locals, in turn, accused the government of failing to issue the necessary alerts that could have helped people prepare and move to higher ground.

Bishop Bakare from the United Mutare Residents and Ratepayers Trust told The New Humanitarian he believed the government could have made prior arrangements to evacuate people to a place of safety before the disaster struck.

Cyclones have hit Southern Africa before. Malawi, Mozambique, Zambia, and Zimbabwe all experienced floods in 2000 from Cyclone Eline.

“Crops and livestock have been destroyed, power supply and communication continue to be disrupted in affected areas,” the society said. “The hardest-hit areas remain inaccessible as heavy rains have damaged roads and main access bridges have been washed away.”

There is also concern over the increased risk of malaria, cholera, and other diarrhoeal diseases.

The cyclone has compounded an already dire situation in Zimbabwe and countries in the region, as the 2018/2019 farming season has already been marked by dry spells and drought.

At the St. Charles Lwanga Secondary School in the southeastern district of Chimanimani, a boulder rolled into the dining hall and towards the dormitory, trapping 14-year-old Donnell Mashava and two of his classmates. Only Mashava made it out alive.

“The school head and other teachers had to use a hammer to crash the rock into pieces in a bid to rescue the trapped kids,” said Mashava’s mother, Helen Benza. She said her son’s body, legs, eyes, and face were still swollen and bruised from the crush.

Chimanimani is the Zimbabwean district worst hit by the cyclone, which also cut off the Mozambican city of Beira and brought intense flooding to parts of Malawi. Heavy rains and flash floods saw homes, livestock, and people swept away – bridges and roads destroyed.

According to the Zimbabwe Red Cross Society, more than 200 people have been injured, mainly in Chimanimani, while more than 900 homes have been destroyed and some 15,000 people are affected.

In Chipinge district, Rutendo Mushimo’s entire compound was washed away by the cyclone, while bridges and roads were completely ruined.

“Our school-going children used to use this road to school, but now the area is inaccessible,” said Mushimo. “Our clinics have been wiped out, leaving us with nowhere to seek healthcare.” 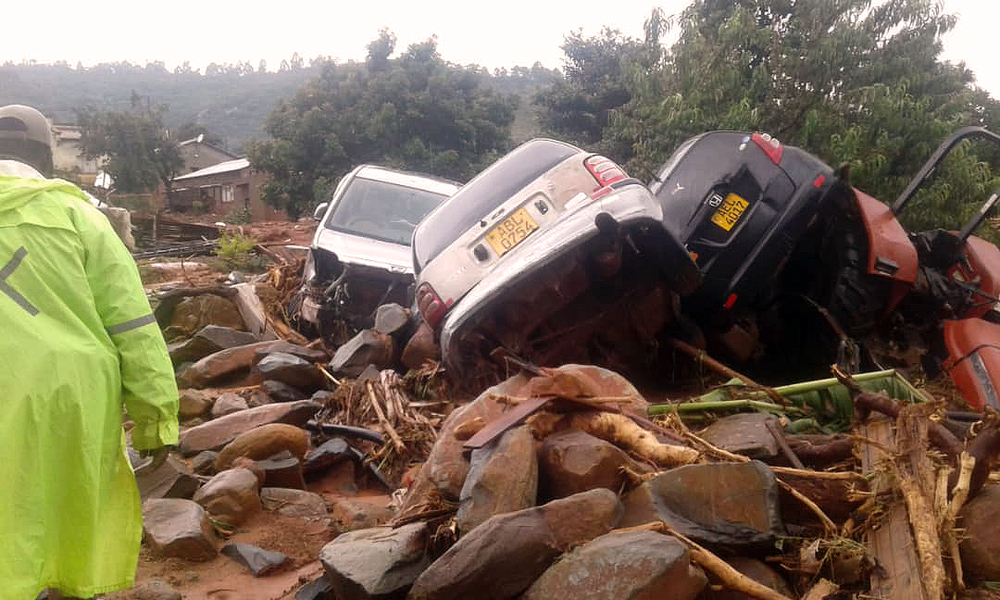 Women who used to bring their goods to be sold in the area have been left unable to get to market with no source of livelihood. “Many of us are now homeless and our source of income have been greatly affected,” Mushimo said.

One Chipinge resident, Cephas Mushoni, said people were no longer safe there. “We are in desperate need of help,” Mushoni said. “The walls of our homes have fallen. There is nothing we can do as the fruits and vegetables we used to plant and sell were all swept away.”

The World Food Programme says 90 percent of Chimanimani has been significantly damaged. It also estimates that 200,000 Zimbabweans are in need of urgent food assistance for the next three months.

“This disaster compounds an already dire situation, as the hardest-hit areas were facing severe food insecurity and economic hardships prior to the cyclone,” Paolo Cernuschi, Zimbabwe country director at the International Rescue Committee, said in a statement.

“Whatever crops that were being grown despite the drought have now been destroyed in the floods, and these districts will need the help of the international community now more than ever.”

Zimbabwe’s agriculture minister Perence Shiri acknowledged it’s going to be a tough year for the country, but said in a statement that the government needs to prepare for such disasters and put measures in place to tackle the challenges posed by climate change.

Read more: What the fuel protests means for Zimbabweans

Southern Africa is facing El Niño conditions for the second time in three years. People in the region are still grappling with the impacts of a strong drought episode in 2015/16, which already weakened their capacity to produce food.

The latest report from the Famine Early Warning Systems (FEWS) Network, a food security watchdog, highlights that most crops in Zimbabwe are water-stressed with some already completely written off because of the prolonged dryness this season and extremely high temperatures in arid areas in most parts of the country.

An invasion of Fall Armyworm has worsened the situation, affecting crops – mainly maize – in all districts, and about 2.4 million Zimbabweans are said to be in need of food aid due to drought.