Zimbabweans had been hoping for a fresh start when Robert Mugabe’s 38-year rule came to an end in November 2017. But 14 months on, a brutal crackdown on fuel protests, which has left up to a dozen people dead, has the country on edge and is likely to make existing food and health problems even worse.

The Southern African country already faces a range of humanitarian concerns, with the UN and international aid groups filling gaps in food security, health and HIV care, water and sanitation, and social protection for vulnerable civilians.

Ongoing outbreaks of cholera and typhoid fever have killed more than 80 people since September, and some 2.4 million Zimbabweans, more than a quarter of the rural population, require food assistance this January-March lean season.

The new unrest, coupled with growing economic and political uncertainty under the government of President Emmerson Mnangagwa, is raising fears that the humanitarian situation may deteriorate further, threatening the health and livelihoods of millions of people and leading more Zimbabweans to flee to neighbouring countries.

Read more → How three Zimbabweans are surviving the meltdown

What are the underlying economic issues?

Zimbabwe, which is under international sanctions, has battled two decades of unemployment, rising costs, a currency crisis, and nearly collapsed public services. Inflation rates have surged, and about 80 percent of those with work are employed in an informal sector marked by poor and unpredictable working conditions.

The country abandoned its national currency in 2009 in favour of a multi-currency system, and has since suffered from a decade-long currency crisis. This has led to instability in the price of goods and services – an instability compounded by the new unrest.

“The political problems are actually stronger than the economic problems.”

“The current problems in Zimbabwe are both political and economic,” said Michael Tichareva, an independent financial expert based between Harare and Johannesburg. He attributed the roots of the current crisis to a combination of corruption and gross mismanagement of public institutions by the long-ruling ZANU-PF party.

Why are there food and fuel shortages?

The country’s agro-based economy is crippled – largely due to droughts, poorly integrated climate risk management policies, and a lack of state support for small-scale farmers who grow most of the country’s food.

FEWS NET, a US-funded food security and malnutrition watchdog, says economic challenges and below-average rainfall this season will directly affect livelihoods and food security in large parts of the country – mostly for poor households, but also for some who are better off. Shortages of basic food commodities include cooking oil, sugar, flour, and bread.

Zimbabwe has to import nearly all its fuel. Stocks are heavily dependent on foreign currency exchange, and even when foreign currency is released it can take a long time to get fuel from depots out to affected areas. Severe fuel shortages have plagued the country for the last two months.

A week after the protests, people could only get petrol or diesel if they waited in kilometres-long queues or if they had friends with connections. Supermarkets also struggled to stock their shelves, and medicine was scarce.

The shortage of goods and fuel has sent prices skyrocketing.

A loaf of bread, which cost between 70 cents and one dollar (or Zimbabwean bond note) in December is now 1.50 in the shops and five dollars in the streets, following the protests. Fresh milk, which was 1.20 in December, is now four dollars; maize meal that was 4.50 is now 8.20; and cooking oil that was 3.20 is now nine dollars. 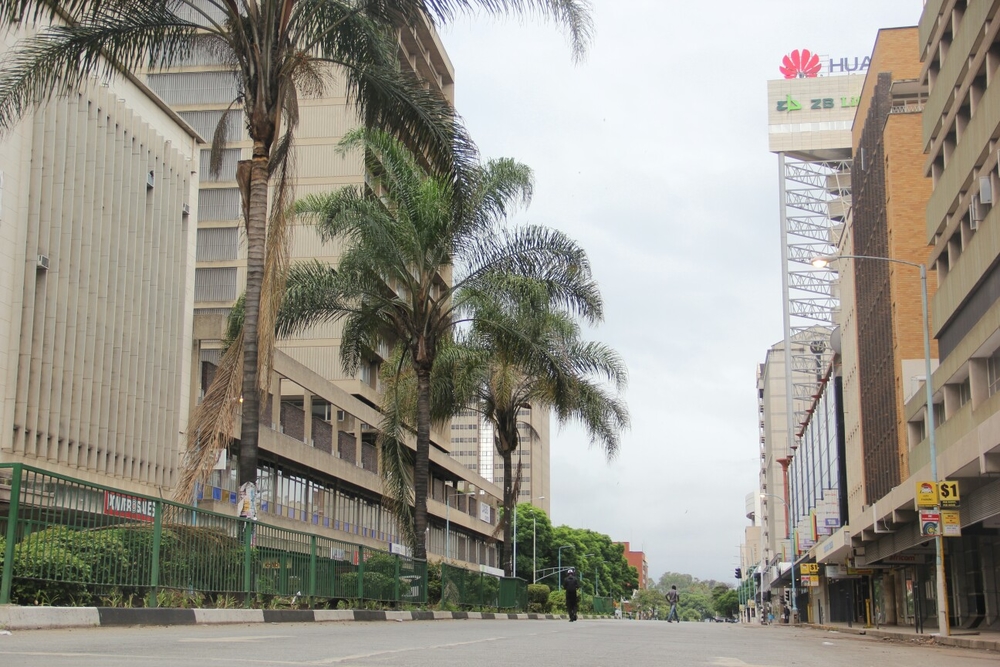 What sparked the current crisis?

On 12 January, Mnangagwa’s announced a 150 percent increase in the price of fuel – an attempt to stabilise supplies as Zimbabwe struggles with what is its worst shortage in a decade. This led to calls for a nationwide stay-away, which then escalated into mass street protests in the main towns and cities across the country, and a deadly crackdown by police and the military.

Between eight and 12 people were reportedly killed, 78 people were injured from gunshots, and several hundred arrested. House raids, abductions, and incidents of systematic torture were reported, as well as allegations that some soldiers raped protesters.

Mnangagwa, who was in Europe when the unrest began, cut his trip short, cancelling his attendance at the World Economic Forum in Davos, and promised that the violence – which he blamed on “rogue” elements in the security forces – would be investigated.

However, the ZANU-PF government then accused the opposition of orchestrating the protests, saying they were planned in advance and not triggered by the fuel price hike. The presidential spokesperson even went on to threaten more violence against the opposition. Reports of state-sponsored attacks continued even after protests died down, with allegations of soldiers patrolling suburbs, beating up residents, and abducting people.

The hope for a new era that accompanied Mnangagwa’s election win last year is fast evaporating amid recriminations over a heavy-handed state response that has led to comparisons with his predecessor.

What are the humanitarian implications?

Nelson Chamisa, leader of the opposition Movement for Democratic Change, has said the people of Zimbabwe are facing an existential threat and warned of “a far worse humanitarian crisis with devastating consequences”.

Last week, the Crisis in Zimbabwe Coalition also warned that if issues were not addressed it could trigger a regional humanitarian crisis, presumably speaking to fears of a new wave of outward migration.

Such claims are hard to qualify, but some immediate effects on health access, and water and sanitation, have already been felt during the protests.

“In some instances those victims have no idea where to go to seek medical attention,” she said. “In other instances, where they have been provided with support, the state is putting impediments that are obstructing these victims from accessing the healthcare facilities.” Gorejena said doctors were victimised and harassed, medical facilities were raided, and ambulances attacked.

Consequences of prolonged stay-aways on the health system could also cause serious setbacks in treatment for HIV patients who need to access antiretroviral treatment in public hospitals. According to UNAIDS, Zimbabwe had 1,3 million people living with HIV in 2016, with 75 percent of these accessing daily antiretroviral therapy.

“The public health issues come up when there are issues with governance, issues with political unrest, instability,” said a public health specialist at a local NGO that advises Zimbabwe’s health ministry, asking to remain nameless for fear of reprisals.

“The stay-away also means that basic services [like those] at the city council are not being rendered,” the specialist said. Such services include the maintenance and repair of sewer lines and water pipes – critical to preventing contamination and ensuring hygiene standards in a country tackling a series of cholera, dysentery, and typhoid outbreaks.

For cholera patients needing treatment, public unrest can also lead to delays in the sick reaching health centres. “Some doctors couldn’t make their way [to hospitals during the protests] because they feared for their safety,” the public health specialist added.

What will happen next?

Mnangagwa has called for a national dialogue to resolve the crisis. However the Crisis in Zimbabwe Coalition said the environment was not yet conducive to talks as “false accusations and charges” continue to be labelled against labour and civil society leaders, while violence by security forces has not ceased. The group warned of “greater chances of escalation of social unrest and instability” if this volatility is not addressed.

Hundreds of activists and opposition figures are still in hiding, and some fear that the government crackdown could last for months. At the same time, the economic problems that caused the crisis persist.

South Africa’s president said Zimbabwe’s crisis was a challenge for the whole of Africa, and called for international sanctions to be lifted as a means to ease the situation.

Some reports say up to three million Zimbabweans already reside in South Africa, both as legal and undocumented residents. Amid concerns over a new  “influx”, South Africa’s main opposition party said officials along the border between the two countries told them as many as 130,000 people made the crossing from Zimbabwe in just one day last week.

“I study migration in response to crisis, and Zimbabwe is my main case study,” Chipo Dendere, an assistant professor of political science at Amherst College, told IRIN. “People will want to leave, and they are already doing so.”

“The mood is bleak. The hope from November 2017 is gone. The danger with this new type of hopelessness is that it opens doors for extremists,” she said. “Under Mugabe, people would say anyone is better – they held on to that. Now [Mnangagwa] has crushed that expectation of anything better. By increasing open militarisation of the state, [Mnangagwa] has failed to create the needed illusion that Zimbabwe is a civilian government, and that is scary for people.”