It was two nights before Christmas in 2013 in a suburb of Bangui, the capital of Central African Republic. All Claire’s grandchildren were gathered in her house, playing, seemingly safe from the horrors outside.

On the streets, brutal fighting between Muslim Séléka rebels and Christian anti-balaka vigilante groups had been raging since the rebellion began a year earlier.

Suddenly there was a knock on Claire’s door; anti-balaka militiamen were looking for her Muslim son-in-law, who had joined the Séléka. Claire, herself a Christian, told them he wasn’t home. They forced their way in, locking all 12 children away, before brutally raping both Claire and her daughter in the living room. The assault left her daughter infected with HIV and impregnated with a child who also suffers from the disease today.

“I can try to move on with my life, but my daughter is left by herself, sick with no assistance. She is not working, and she cannot take care of her daughter,” said Claire, now 57, whose full name IRIN can’t reveal for security reasons.

Claire’s story is not unique in CAR. Countless war crimes have been committed during an ongoing civil war since 2012 that has forced a quarter of the population to flee their homes. The country’s pervasive culture of impunity means perpetrators continue evading both arrest and investigation, very often living side-by-side with those they have victimised.

When he was elected to office in 2016, CAR President Faustin-Archange Touadéra said “reconciliation cannot be achieved at the cost of impunity”. But with few results delivered since then, victims have become deeply sceptical about the prospect of any real justice.

This may be about to change.

Last week, former anti-balaka militia commander Alfred “Rambo” Yekatom, was extradited by CAR authorities to The Hague, where he is set to become the first Central African combatant to stand trial for war crimes and crimes against humanity at the International Criminal Court.

The news came two weeks after the long-awaited Special Criminal Court held its opening ceremony in the capital Bangui. The local court, which is assisted by the ICC, will investigate and prosecute other war crimes and genocide committed before and during the civil war.

Human Rights Watch said the new hybrid national/international court presented “a significant opportunity to end the widespread impunity that victims of the cycles of violence in the Central African Republic have faced”. A report by Amnesty International said it has the potential to “help build public confidence in the CAR justice system and bring an end to the pervasive culture of impunity”. 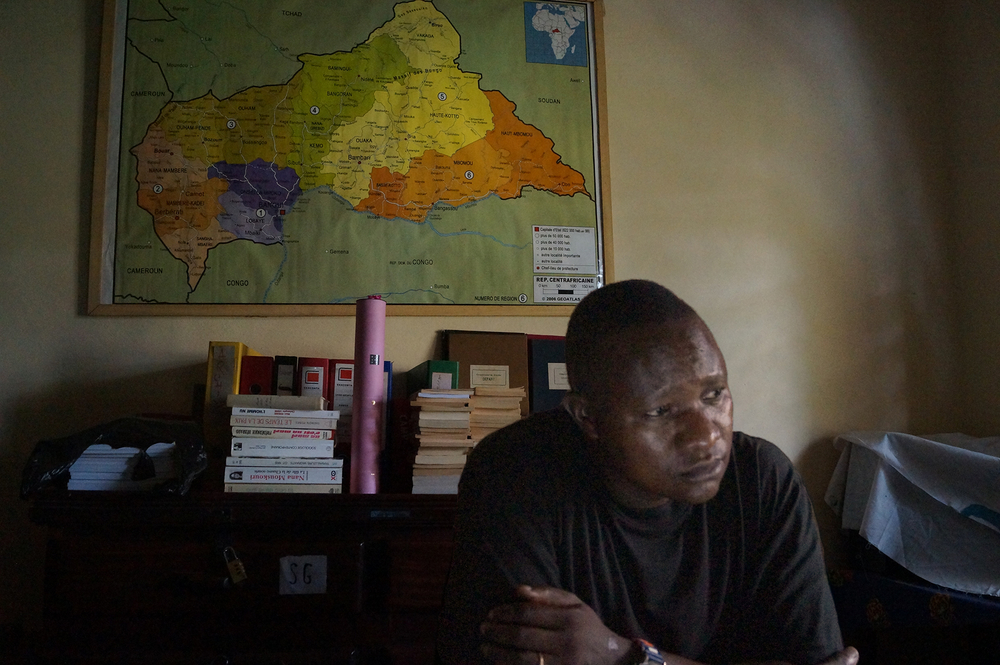 Florian Elabdi/IRIN
Fréderic Nakombo, secretary general of the Justice and Peace Commission, sits in his office.

As a result of the anarchy, the Séléka disbanded and gave back power to an internationally recognised government that today controls around a fifth of the country. In the rest of the former French colony, ex-Séléka and anti-balaka militias are still battling for control of territory and natural resources.

The armed conflict has been characterised by widespread war crimes committed against civilians on both sides. A 2015 UN commission of inquiry determined that the scale of attacks against the Muslim minority constituted ethnic cleansing, but without genocidal intent.

The latest developments, however, are a boost for local efforts to convince victims to bring cases before the SCC tribunal.

The Catholic Church’s Justice and Peace Commission launched an initiative in 2013, with support from Advocates Sans Frontières, to establish so-called “Listening Centres” throughout the country.

“There were many people who didn’t want to file their cases at the police because of bad experiences with the authorities,” explained Fréderic Nakombo, secretary general of the commission. “When they heard about the Listening Centre, they were willing to tell us what happened to them.”

IRIN met Claire at a Listening Centre in Bangui when she arrived to seek legal advice. Her case caught the attention of a local human rights group because of its brutal nature and is one of five the tribunal has so far decided to investigate and prosecute.

However, it is close to impossible to find the perpetrators in cases like Claire’s where no suspects have been identified. Even in cases where there are clear suspects, victims have seen several examples of notorious warlords getting away with their crimes with impunity, so they are doubtful their low-ranked offenders will ever face justice.

Earlier this year, former anti-balaka leader Patrice Edouard Ngaïssona was elected to the executive committee of the Confederation of African Football, or CAF, the largest of FIFA’s six continental confederations.

Elsewhere, in parts of the country outside of the government’s reach, ex-Séléka rebel commanders like Abdoulaye Hissène and Noureddine Adam, both under UN sanctions, continue to lead groups that have committed atrocities.

At the same time, former president Bozizé, who was ousted in the 2013 coup, is also under UN sanctions for war crimes, but still lives safely in exile in Uganda.

Elected as an MP in 2016, Yekatom himself is another example of the extent of non-liability for alleged war criminals.

Yekatom, who commanded around 3,000 militiamen, is allegedly responsible for crimes such as murder, torture, recruiting child soldiers and more, all committed in the period between December 2013 and August 2014.

He was only arrested last month after firing a gun during a parliament debate. It was this unrelated arrest that triggered his extradition to the ICC, which could potentially have an accelerating effect on the presently stagnant hunt for other warlords in the fragile state.

“Predicting the future is a risky business, but now that an anti-balaka commander is in The Hague, it would not be unreasonable to anticipate a Séléka arrest very soon,” Patryk Labuda, Global Fellow at New York University, argued in a recent analysis for OpinioJuris.

Jurists running the project argue that in a country plagued by years of intercommunal violence, seeking justice for victims is a precondition for reconciliation and future peacebuilding.

“We cannot begin a real process of reconciliation in this country before the perpetrators of atrocities have been brought to justice or the victims have received compensation,” said Sosthène Mbelesso, legal coordinator at Bangui’s Listening Centre.

“It is massively important that justice prevails and there is no impunity. There have been so many atrocities committed that we cannot just forget.” 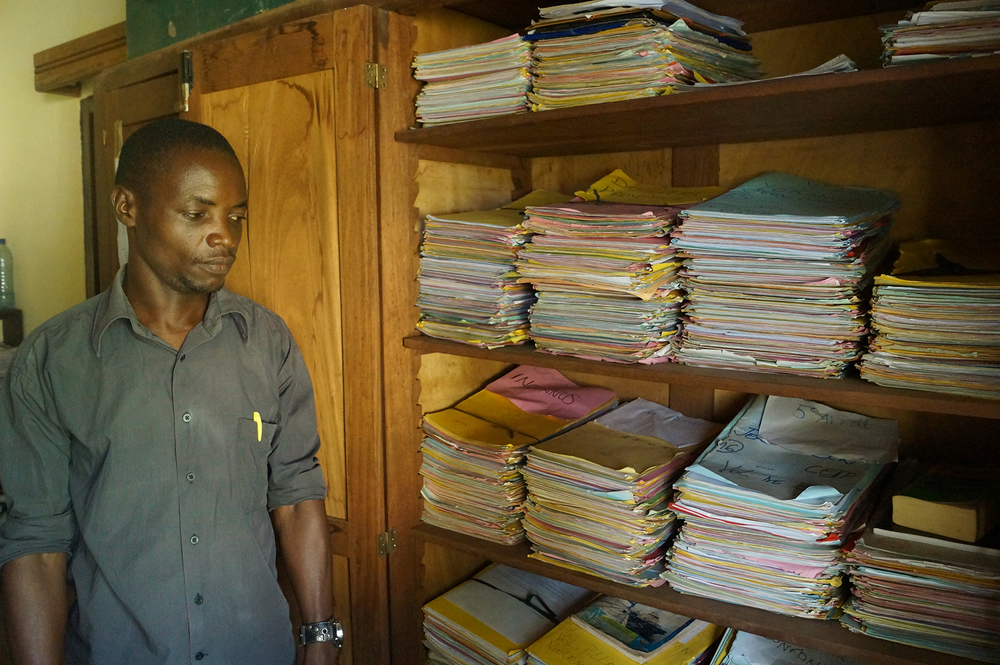 ‘There is justice on Earth’

Regina Nicole Yamalet was also at the Listening Centre in Bangui. She had come to talk about her 24-year old brother who was killed by Chadian peacekeepers in a shooting rampage in the city that also killed two other teenage boys. He died the day before his twin sons turned three months old.

“Every time I glance at the children, I immediately think of my brother,” she said. “As a woman, you’re often harassed in our neighbourhood. Everytime it happens I come to think of my brother because he was so courageous and strong and he would always be there to protect me.“

Yamalet explained how the killing of her brother has left her in deep sorrow. Yet she remains one of the few Central Africans who are optimistic that justice will be served.

“As a Christian, I was taught to trust in God and leave things in the hands of God. But the priests in the local church and awareness campaigns in the radio taught us that we should not just leave these cases. There is justice on Earth, before justice in heaven,” she said.

Yamalet’s optimism is the outcome of the Listening Centre’s efforts to change people’s attitudes towards the SCC tribunal. Through radio programmes, billboards and sermons, the Listening Centre has tried to convince people to take their cases to the court despite preconceptions stemming from religion or general mistrust in the legal system.

Through the Listening Centres initiative, the commission has received thousands of testimonies and compiled some 6,250 potential cases. The centres across the country assist all victims regardless of religion.

The overriding question remains whether the SCC, made up of 13 local judges and 12 international judges, can be the beginning of the end of CAR’s widespread impunity.

The recent inauguration of the SCC after almost four years of preparatory work and last week’s extradition of Yekatom does show “grounds for optimism”, said Patryk Labuda from NYU School of Law, adding: “There is a real opportunity to break the cycle of impunity in CAR.”

“The SCC has taken a long time to be established, but the international community and Central Africans have used this time wisely.” he said.

“There is a real opportunity to break the cycle of impunity in CAR.”

“The government of Touadéra remains committed to the fight against impunity, despite pressure from various states and regional actors to seek compromise. The SCC ultimately depends on the goodwill of the host state, so it is critical that the right people remain in power in CAR.”

But there are challenges. The main ones being security and outreach in a country where 80 percent of the territory is controlled by rebels.

“It will be important for the SCC to be more than a Bangui court – it has to find a way to communicate its work to people outside the capital, and this is likely to be a huge challenge given the prevailing security dynamics,” Labuda said.

Back in the Listening Centre in Bangui, Yamalet still had hope that her brother’s killers would be found.

“I have a real trust that justice will be served in this country,” she said. “We should trust that once the local judicial procedure starts to work, the international court will assist and I’m sure if they all work together, there will be justice.”

Claire was not nearly that confident.

“I cannot identify the men who did this to us and I don’t believe they will be brought to justice, but the least I hope for is some kind of economic compensation. I’m living under immense stress and anger because of our situation,” she said, with tears in her eyes.

(TOP PHOTO: Anonymous man, 44, gives testimony. His house was burned down in the sectarian violence in 2014. His five children fled the country and are still living in a refugee camp in Cameroon. He hopes that the tribunal will give him financial compensation so he can rebuild his house and bring back his children. CREDIT: Florian Elabdi/IRIN)