It was a set-up and Buharin Daji walked right into it. The notorious cattle-rustling kingpin had arrived for a meeting in the northern Nigerian bush, ostensibly to settle differences with one of his senior lieutenants, but instead was shot dead.

Daji’s murder in March has had consequences in an already deeply troubled Zamfara State, where years of building unrest have claimed thousands of lives and driven whole communities into destitution.

This underdeveloped yet agriculturally rich region has been unstable for many years. What began as unresolved clashes between Hausa farmers and Fulani pastoralists over access to land has transformed into a lucrative illicit economy of banditry and cattle-rustling dominated by men like Daji.

Zamfara is different from highly politicised farmer-herder clashes in other parts of Nigeria where largely Muslim pastoralists push south in search of pasture and meet increasingly populated Christian farming areas. Instead, Zamfara is overwhelmingly Muslim and, human rights groups argue, the violence here is fundamentally about the government’s abdication of its responsibility to protect its citizens.

According to Amnesty International, more than 370 people have been killed by the outlaws so far this year. Others have been kidnapped and held for ransom – payments are encouraged with phone calls to loved ones as those being held undergo torture.

Daji was viewed as a solution to the crisis. In a case of poacher-turned-gamekeeper, he was put on the state government’s payroll at the end of 2016 to help stop the violence he himself had stoked.

The idea was that Daji would use his influence to rein in other brigands and help with a gun amnesty drive, all in exchange for a salary and impunity. But this didn’t address the underlying causes of Zamfara’s lawlessness, and the state government’s dysfunction prevented it even from making the regular payments to Daji, Adamu Abubakar, director of the Centre for Community Excellence, a local NGO, told IRIN.

The death of Daji was the final blow to already frayed attempts to forge peace. With him gone, Zamfara risks unravelling further and faster. 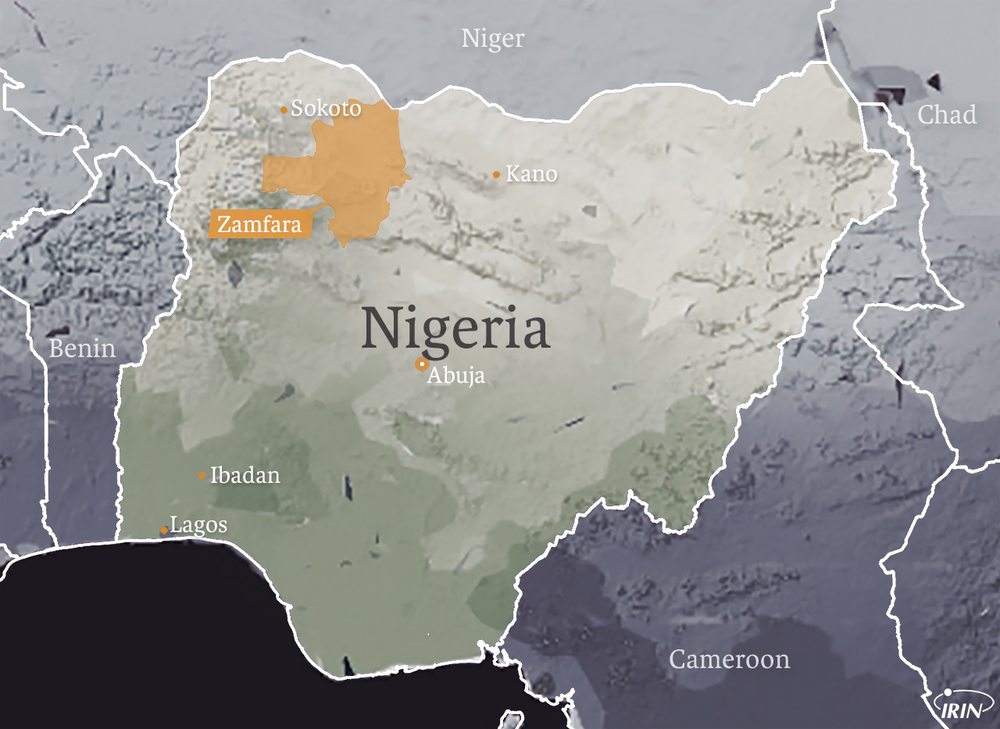 Northwestern Nigeria has a long history of banditry. The first recorded case occurred somewhere between “western Hausaland” and the Niger border in 1901, when a 12,000-strong camel train “laden with assorted grains” was attacked and 210 merchants killed.

The tragedy for modern-day Zamfara is that more than a century on, there are still ungoverned spaces where the state is incapable of stamping its authority.

Control is so weak in some regions that bandits can come into rural towns, typically three-up on a motorbike, unchecked. In some areas they lay down the law and become the local authority: “It’s fast justice, and there is no appeal,” explained Abubakar.

Hausa and pastoralist Fulani communities coexist in Zamfara, with competition over land and water sources historically managed through mediation. Banditry has introduced a new level of friction between the two, with the Fulani, marginalised from local political power, more closely associated with brigandage – men like Daji being an example.

Nigeria is a big country that is thinly policed. In Zamfara’s rural districts there are likely just two poorly equipped and under-motivated policemen to serve many inaccessible communities, according to Zamfara State government spokesman Ibrahim Dosara.

Historically, state governments have turned to vigilantes to deliver the manpower and local knowledge the federal police lack. In Zamfara these groups are provided with some motorbikes, uniforms, and locally made single-shot hunting rifles, but little other support to meet the rising tide of banditry.

Payment of allowances is often late, they are outgunned, and some vigilantes turned on the people they were supposed to protect – stealing and extorting – while also murderously targeting Fulani. “Along the way, part of the vigilante became part of the bandits,” said Abubakar.

Aisha is just one face of the emerging crisis. Until a few weeks ago her home was the village of Kagara in central Zurmi district. Now it’s a disused petrol station in Zurmi town, where she and her extended family rely on the hospitality of the station owner and the generosity of the town’s people, who help with food when they can.

Aisha is here because Kagara was attacked by bandits who killed her husband and then beat her with rifle butts when she tried to protect her younger brother by covering him with her hijab. They shot him and four male cousins dead as they burned and looted, combing the village for homeguard vigilante who had formed to protect the village with locally made muskets.

The bandits had turned up on motorbikes, armed with AK-47s, speaking both Hausa and the Fulani language, Fufulde, with some taking care to cover their faces. Aisha recognised none of them. She suspects some might have come from neighbouring Niger or further afield, in a transnational criminal free-for-all.

Asked why she thought they’d attacked Kagara, Aisha gave a now-familiar response: “Only God knows.” But “they have our phones and call us to say they will kill us if we go back,” she added. 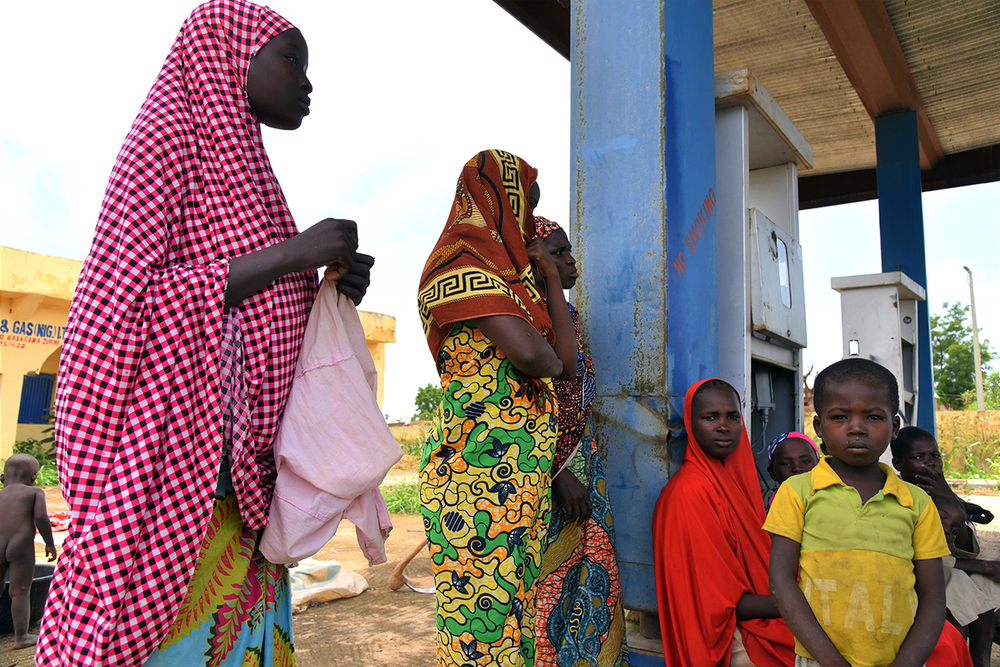 The bandits, seemingly able to move at will, took over three districts in Zurmi in June, a total of some 18 villages and towns. But now the state government is insisting the thousands of people displaced by the rolling violence should go home.

When IRIN visited Zurmi the authorities had just closed a camp for those displaced by the violence in the local secondary school. Aisha has no intention of going back anytime soon, but her 19-member extended family was unsure what to do.

Bala Aruna, the petrol station owner, stepped in after he spotted them by the roadside. “I said, ‘I have a place you can shelter out of the rain’,” he recalled.

“Only God knows when this problem will end,” he said. “Yesterday, [the bandits] attacked people that had returned home, just three or four kilometres from here.”

Despite the chaos, which helps keep Zamfara the poorest state in the federation, Governor Abdulaziz Yari is frequently absent. He is loudly criticised for spending much of his time in the federal capital, Abuja, where he chairs the powerful Nigeria Governors’ Forum.

“Banditry is a failure of the state to fulfill its primary purpose of providing security,” Chidi Odinkalu, of the Open Society Justice Initiative, told IRIN. “Yari should go back to Zamfara and do his job and govern his people.”

The state government spokesman, Dosara, insisted that Yari is “fully engaged” with the affairs of the state.

At the paramilitary Civil Defence Corps headquarters in Zurmi, a bare, solid low-rise building, the commanding officer spoke candidly about the IDP camp closure being premature. His alarming analysis was that the bandits in this region were trying to clear a corridor along the border with Sokoto State and north to Niger – which includes Aisha’s village.

“Banditry is a failure of the state to fulfill its primary purpose of providing security.”

“That’s their base. Anyone they kidnap, that’s where they keep them,” he said. “[If there’s trouble] they run into Niger or Sokoto.”

The federal government last year responded to the crisis by sending in an army battalion. When that didn’t work it deployed an Air Force special forces Quick Reaction Group in June, complete with helicopter gunships.

Although that deployment is having some success, “the military can only suppress the problem, they can’t resolve it,” said Abubakar, the NGO director, describing a balloon effect that means wherever they squeeze the outlaws just pop up elsewhere.

Banditry exists because it is profitable. From around 2011 there was a surge, which some commentators linked to increasing regional livestock prices. Rustling is now an entrenched and thriving underground business, with stolen cattle kept in the forests that dot Zamfara’s border regions (including the equally troubled Binan Gwari area of Kaduna State) before being discreetly sold to meet the ever-growing demand for beef in southern cities.

“Before, it was the Fulanis that were rustling cattle, then the Hausas joined in. Now, every criminal in Nigeria has come to Zamfara,” said Suleiman Abakar – a wealthy farmer, until his 60 head of cattle were stolen. “There is no other way to make money as quickly as rustling.”

In the bad Spaghetti Western that is now Zamfara, cattle rustling is not the only profitable enterprise. Abakar, the former farmer, is now an artisanal gold miner. It’s a job that carries significant risk as gold deposits here are usually found next to highly toxic lead.

The more immediate danger is not lead poisoning but being shaken down by bandits. “They take whatever they want,” said Abakar.

“There is no other way to make money as quickly as rustling.”

The insecurity induces an understandable paranoia. Everybody IRIN spoke to knew at least one victim of the violence, and in every conversation mention is made of shadowy “informers” who spy and sell out their neighbours for a share of the loot.

The guessing game of who the masterminds are protecting the bandits runs the gamut from senior state officials to traditional rulers – an assumption of high-level impunity and corruption exposing the deep distrust people have for those in power.

There’s little evidence of any of this happening in Zamfara.